About 150 people are trapped by a raging wildfire near Mammoth Pool Reservoir in northern California, where officials are warning they may have to jump into the water to survive.

The Madera County Sheriff’s office said on Saturday night that approximately 150 people are sheltering-in-place at the reservoir in Sierra National Forrest with 10 injuries reported.

Evacuation routes are blocked and people in the area were told to shelter in place — even if that means getting into the water, a Sierra National Forest told the Fresno Bee. 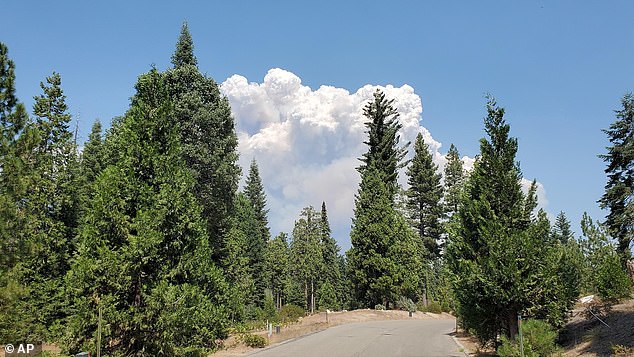 Smoke from a wildfire rises into the air near Shaver Lake, California on Saturday. The fires in the Sierra National Forest have prompted an evacuation orders

The reservoir is roughly 90 miles east of Fresno. Earlier reports that up to 1,000 people were trapped were later revised.

The Creek Fire is threatening a range of mountain resources, including structures, communities and power lines.

Developing story, check back for updates.