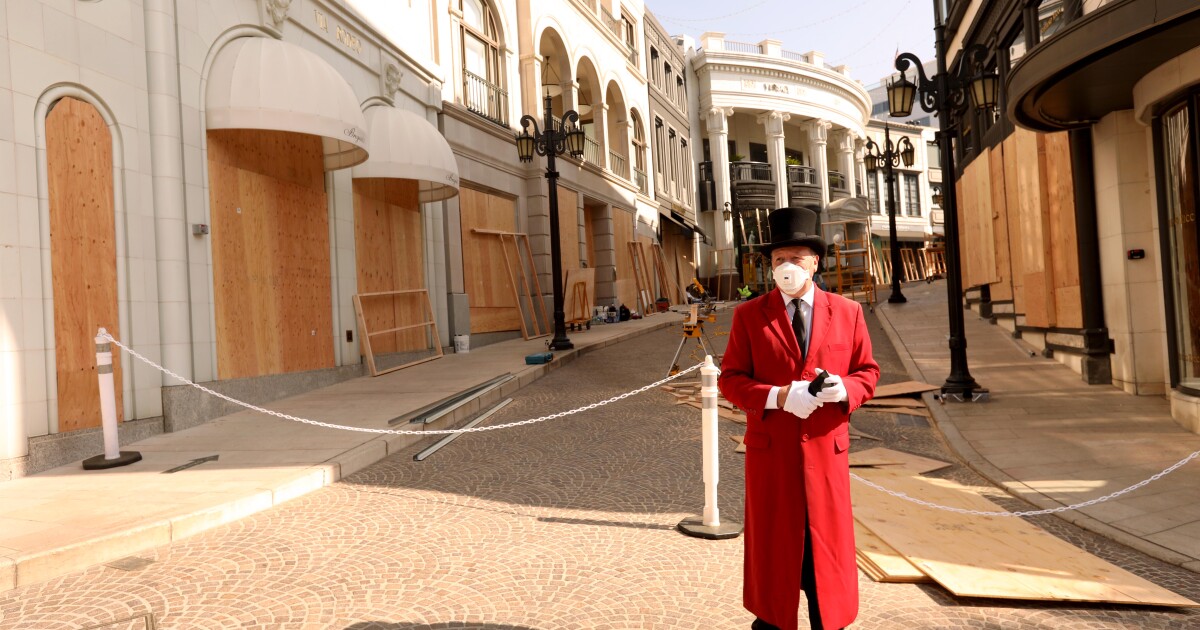 Michael Williams stepped out of his apartment in downtown Long Beach on Monday to buy a couple of midday Red Bulls for himself and his girlfriend. He was unsettled, thinking of an image he saw on Twitter of a man waiting for election results holding an AK-47. Now he noticed the streets were eerily empty — and the shopkeepers were boarding up for election day.

He watched in disbelief and texted photos to his friends in North Carolina. “This is disturbing,” he recalled thinking.

In this historic year of plague, fire and unrest in California, the notion that the United States electoral process could devolve into disarray and violence has cranked up the anxiety even more, with people hoarding food, some buying their first guns, others stocking up on ammunition.

The sound of that tension could be heard from Rodeo Drive to Santa Ana in the rattle of compressors and the thwack-thwack of nail guns. Thick plywood was going up over shop windows and doors, just as it was in San Francisco and San Diego, Philadelphia, Washington, Miami and Dallas, as if the entire nation were bracing for a single enormous hurricane.

Williams, who is 39 and Black, lived his whole life, until last month, in the rural South and was always wary on voting day, but never did he expect this kind of fear of electoral failure and widespread civil strife.

“I’ve been through many elections,” he said as he bought his drinks at a boarded-up 7-Eleven. “I’ve never worried about something happening like this.”

The cashier said the plywood was just a precaution. She declined to give her name, saying she was an immigrant and it was best to lie low these days. She couldn’t believe that the U.S. would ever feel “so unstable.”

“Whoever would have?” she asked. She pointed to the blockaded windows. “Looking at things like this makes it all the more scary.”

Qari has manned the El Sol Jewelry stand for a dozen years and, until the pandemic, spent his days aggressively competing for sales with his fellow jewelers. It was ghostly quiet now, with few customers and only four of 10 owners left on the floor.

In anticipation of the election, they had removed their stock to safer locations.

“Everybody is a little nervous about the election tomorrow,” said Qari, who lives in San Gabriel. “I don’t know what’s going to happen, but we have to be ready.”

Los Angeles police and the L.A. County Sheriff’s Department are preparing for the possibility of unrest and plan to have thousands of officers ready to be mobilized at a moment’s notice.

LAPD Chief Michel Moore said nearly every uniformed officer will work a 12-hour shift on election day and be a visible presence across the city all week. He pledged immediate action to restore order if a disturbance unfolds.

Mayor Eric Garcetti said there was no intelligence to suggest there would be violence at the polls, but the Police Department was prepared for the worst out of an abundance of caution.

The election comes after a spring and summer of unrest, with protests against police brutality resulting in mass arrests and corridors of destruction in shopping districts, followed by a Lakers NBA title and a Dodgers World Series win, both marred by violent revelers clashing with police. Just this weekend, a rally for President Trump turned violent in Beverly Hills, where supporters and protesters clashed. Moore said police agencies across the region are sharing intelligence about potential hot spots.

But plenty of shop owners are dubious about getting a quick response from law enforcement.

In June, Rodney Masjedi, 39, owner of DTLA Bikes, watched as the adjacent AT&T store was broken into during a protest. Masjedi said he called police, but they did not arrive for an hour, leaving him to fend for his store.

“There were guys with box cutters who were trying to get in and I had to chase them away,” he said. “No one was coming to help.”

“I remember when people just voted and it wasn’t a big deal,” Masjedi said. “But you have leaders who say ridiculous things that prompt their followers to act in ridiculous ways. We’ve changed as a society, and what you see in the streets isn’t the cause but the effect.”

Masjedi has plywood on his windows and doors this time, and said that after he closes early Tuesday, he’s going to “use giant locks” to secure his venue.

On Rodeo Drive, Beverly Hills resident Sandy Croll, 79, was walking her fluffy Labradoodle amid the pandemonium of what felt like a construction site. “It’s tragic what’s happened to our country,” Croll said.

“I think we hopefully are overreacting, but better safe than sorry.”

Sue Nakao, 58, was driving to work from her residence in Culver City when she decided to stop and take in the scene.

“I’ve never, ever seen like this,” Nakao said in amazement. “It’s so not Los Angeles.”

In Santa Ana, Donna Sanchez, 31, recalled making what was supposed to be a quick trip to Superior Grocers to buy dinner ingredients Friday evening. When she arrived with her 17-year-old daughter, Selina, they were shocked to see the store boarded up. They made their way to the only open entrance on the right side of the store and felt a sense of panic.

“Just seeing everything threw me off,” she said. “I’m just trying to be prepared. I don’t know what to expect tomorrow night once we find out who our new president will be.” It was a statement that presumes we will know who won on election night, by no means a certainty.

Sanchez purchased canned salsa, vegetables and soups in preparation for chaos. “I asked myself, ‘Is this really happening?’” she said. “I don’t like to get involved in politics, and right now it’s getting to me. Never in my life would I have imagined that it would come down to all of this happening. I feel like I have to prepare my children for anything.”