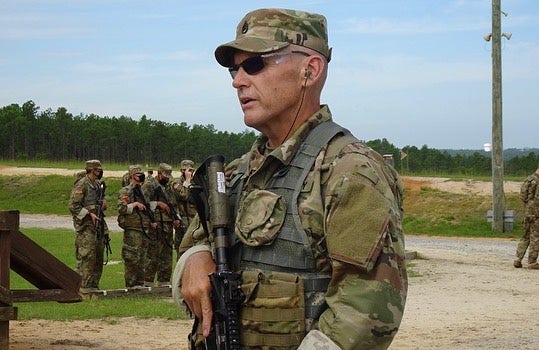 A 59-year-old combat veteran just completed basic training in order to reenlist in the Army Reserve after spending more than a decade out of the armed forces, authorities said on Wednesday.

Staff Sgt. Gould, who previously served in the Marine Corps trained in civil affairs, returned to boot camp at Fort Jackson, S.C., in June. He completed it late last month after spending the majority of his time serving as a squad leader, according to the Army Times.

“Exceeded the standards and exceeded my self-expectations,” Gould wrote on Facebook. “It was a long haul but worth the effort.”

When he left the Army in 2009, he was less than three years short of retirement. Reenlisting with the Army Reserve will help him become eligible for retirement benefits – and give him an opportunity to “give something back to younger troops,” according to the post.

He’ll also be serving in the same unit as his son, Spc. Jarrod Gould, at the 405th Civil Affairs Battalion’s Las Vegas detachment.

The elder Gould served in Afghanistan in 2004 and left the Army in 2009, according to the Army Times. He also spent time working in law enforcement in California.

“For some of these kids, I’m older than their grandparents,” he told the Times. “I went through [Marine Corps boot camp] in 1978. It’s a whole different world.”

He was reportedly impressed by technological developments that have changed basic training over the past decades and the amount of money invested in Fort Jackson.

“The equipment and the ranges they have at this facility are amazing,” he said. “They have these laser simulators. They have these other targets that track your hits.”