To say that Ratched, the new series from Ryan Murphy – the man behind Nip/Tuck, Glee and American Horror Story – is not for the faint-hearted is an understatement.

Nurse Ratched, the stone-hearted head nurse at the psychiatric hospital in Ken Kesey’s 1962 novel One Flew Over The Cuckoo’s Nest, embodied the sadistic petty tyrant.

When director Milos Forman began casting the 1975 film version, the idea of portraying the character was regarded as so thankless a task that five top actresses, including Anne Bancroft, Angela Lansbury and Ellen Burstyn, turned it down before the relatively unknown Louise Fletcher accepted it – and won a Best Actress Oscar as a result. 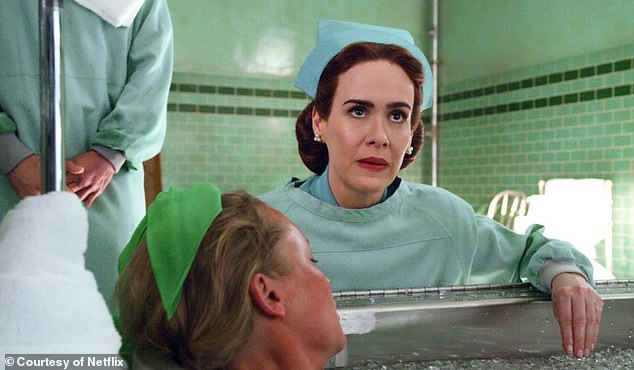 A new Netflix series staring Sarah Paulson explores the origin story of nurse Ratched, from Ken Kesey’s 1962 novel One Flew Over The Cuckoo’s Nest. Pictured: Sarah as as Mildred Ratched

Fast-forward almost half a century, and Murphy has cooked up an origin story for Nurse Ratched, taking her from a troubled young nurse to the monster who would torment Jack Nicholson’s character RP McMurphy in the film, eventually having him lobotomised.

The Netflix series, set in the late 40s, some 15 years before the book, starts with the brutal (and graphically depicted) murder of a houseful of Catholic priests.

The killer, Edmund Tolleson, is taken to Lucia State Hospital, a fictional mental institution in California where dapper psychiatrist Dr Hanover inflicts hellish treatments on his patients in the name of science, and where a newly arrived nurse called Mildred Ratched is quietly following an agenda of her own while battling demons from her past.

‘The show is a character study of loneliness,’ says Sarah Paulson (best known for her roles in Mrs America and The People V OJ Simpson), who plays the young nurse.

‘Mildred Ratched has lived a very lonely, traumatised, abused life that has created in her a way of thinking that may not be the most healthy.

‘I don’t want to make her out not to be a villain because by the time One Flew Over The Cuckoo’s Nest happens, she’s the villain, no question. But as an actress, I had to find a way to align myself with her.

‘Midway through the series we learn about things that happened to her that give some context to what people in desperate circumstances will find themselves doing.

‘It was interesting to peel away those earlier views I’d had of the character – having done so I don’t think of her as a monster. She does monstrous things, but I think she’d say she’s doing them for her own survival.’

Sarah agrees the shoes of Louise Fletcher were very daunting ones to fill.

‘She put Nurse Ratched up there with Hannibal Lecter as one of the all-time greatest cinematic villains, so no pressure or anything!’ she laughs.

‘I did feel like this was a big piece to bite off, because I could really mess it up if I did it wrong.’

She says she took some of her performance from Louise’s. ‘In terms of how I stood, the way I held my hands and that thing of the character trying to maintain a sense of control of her own rage and sorrow. 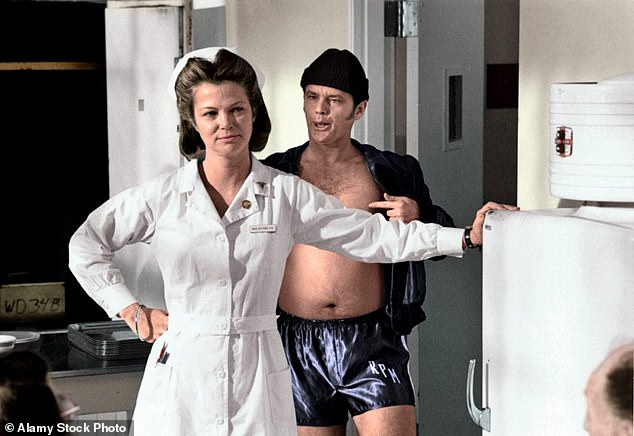 ‘But in the end I had to approach it as I would any character and think, “Who is she, what does she want, what’s in her way and how’s she going to get it?” That’s all you can do.’

Sharon Stone appears alongside Sarah as Lenore Osgood, an eccentric heiress with a pet monkey and a single-minded mission to get revenge on Dr Hanover for a horrific experimental treatment he executed on her son. ‘

Any mother will fight tooth and nail for her child,’ says Sharon.

She drew on her own emotions when her ex-husband, newspaper editor Phil Bronstein, was temporarily granted custody of their son Roan.

Now 20, Roan is back living with his mother and younger brothers Laird and Quinn, but Sharon admits the pain of it will live with her forever.

‘There’s nothing you wouldn’t do for your kid, you’d take a bullet for him. So when this nightmarish event happens to Lenore’s child she just loses it.’ 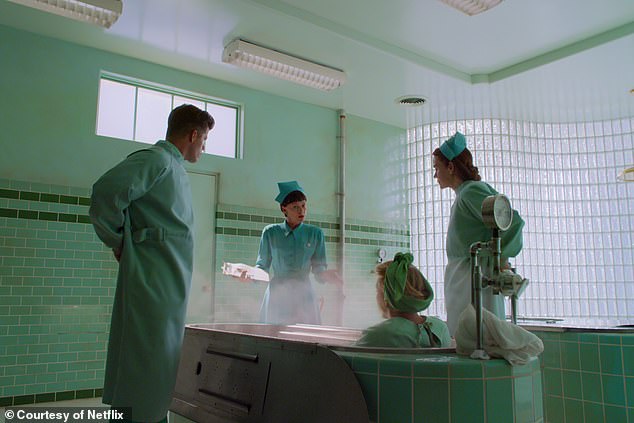 Sharon Stone who appears alongside Sarah as Lenore Osgood, said she drew on emotions from when her ex-husband was granted temporary custody of their son for her role. Pictured: A scene from the Netflix series

Rather more down-to-earth is Sex And The City’s Cynthia Nixon as Gwendolyn Briggs, a political press secretary who’s hiding the fact she’s a lesbian.

Cynthia, who is married to educational activist Christine Marinoni, says, ‘As I was preparing to play Gwendolyn, I returned to a character I’ve long been fascinated by – journalist Lorena Hickok, who was Eleanor Roosevelt’s lover [Cynthia played the First Lady in 2005 film Warm Springs].

‘They were deeply in love, but that was a bridge too far back then, particularly for the First Lady of the United States.

Lorena was a gay woman living in a very masculine world, and I shared a lot of photos of her with the costume designers.’

While Gwendolyn favours slouchy, androgynous clothes, the rest of the female cast are in full 40s glamour, with form-fitting dresses and bright colours. All the better, says Cynthia, to emphasise the disturbing subject matter.

‘My son said it was so creepy; it wasn’t black and white and laden with shadows, it was in terrifying Technicolor!

‘It’s one of the compelling things about it – it takes that late 40s, early 50s saturated colour and brightness, so it looks like an MGM musical. But we’re not singing and dancing, we’re killing people.’

Ratched is on Netflix from Friday.