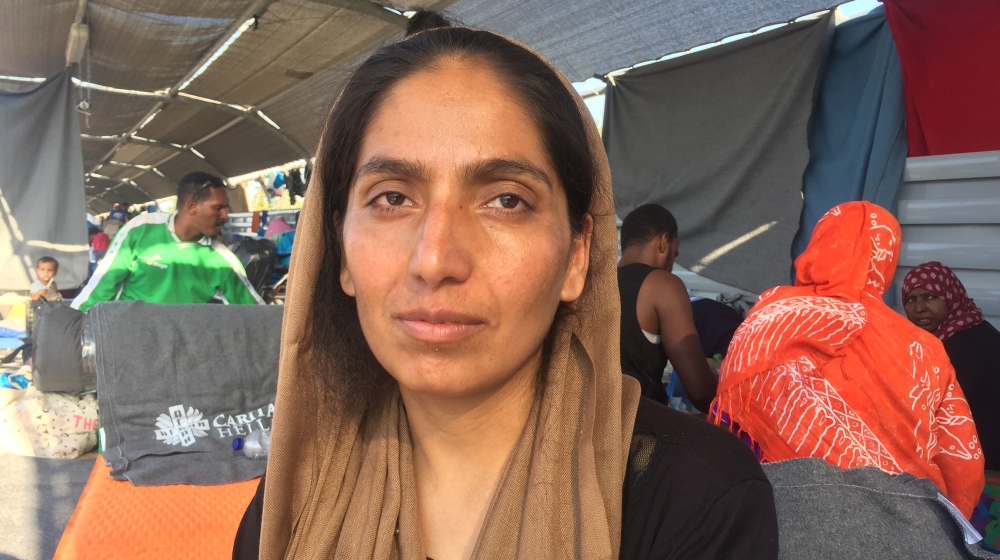 Lesbos, Greece – Homaira Sakha was in her container when she first saw the fire in an adjacent forest. The inferno that reduced Moria to embers started small at about 12:30am on Wednesday, but quickly swelled and started to move towards her.

She woke up her husband, grabbed their important documents, and the couple ran hand-in-hand out of the sprawling refugee camp on Greece’s Lesbos island. The fires surrounded them on all sides, and at one point Sakha felt some kind of explosion, perhaps a bursting gas bottle.

The couple walked for two hours over hills and olive groves to arrive at the car park of a Lidl supermarket.

Some people around gave them blankets and they finally slept. They have stayed for seven days beneath the awnings meant to keep cars out of the sun.

Sakha is eight months pregnant, like many of the women who sleep on the surrounding blankets and tents.

She is hungry and dehydrated.

“Why in the developed world do we have to live like this?” she said. “Where is the UN? Why don’t they care about us?”

One week after the fire, Moria’s 13,000 residents are still scattered in the surrounding streets and olive groves. Several thousand people, including Sakha and her husband, are trapped between two police blockades – they are not permitted to enter the nearby city of Mytilene.

Food, water and medical aid have been slow to arrive.

Down the road, beside the blockade, the Greek government and UNHCR are constructing a new temporary camp. But the refugees and migrants of Lesbos island are adamant that they do not want to return to the squalid and dangerous conditions they saw in Moria.

They want to be permitted to leave the island they are legally required to stay on while their asylum application progresses.

Since the fire, there have been daily protests. Signs hang above self-made tents. They call for no camps and for freedom.

“We are tired of this oppression and we want to be free,” said Sakha.

Originally from Afghanistan, Sakha, 29, lived in Moria for 13 months.

Upon arrival to Moria, she and her husband were not provided accommodation so her husband built them a tent from items he found.

Originally designed to shelter 3,000 people, Moria was packed well over its capacity, meaning thousands of people lived in tents in the surrounding so-called “jungle” area.

One month ago, Sakha and her husband were given a container to live in because she was heavily pregnant and qualified as a vulnerable case.

Since fleeing the burning Moria, for three days there were no regular distributions of food or water. Now, once a day people can line up for several hours to receive a bag with two containers of cooked food, water, and bread. There are not enough meals for everyone.

The Lidl supermarket and other shops on the street have closed, leaving people hungry, unable to buy food, in their parking lots.

Since Friday, protests have risen up several times a day.

“In simple words, we don’t want to go to the camp,” said Sakha. “If we protest they call us savages and barbarians. But we just don’t want to live in a camp.”

During one rally on Saturday, police fired tear gas into a crowd of protesters.

Sakha was protesting and ran away, screaming. All around her people ran trying to find their children, while crying from the gas.

“To me, it looked like the last day of my life,” she said. “We did nothing against the police. They came from two sides and it was chaos.”

Sakha has not attended another protest since, out of fear.

The Greek government says it has so far constructed tents with 5,000 beds in the new camp.

Yesterday, Greece’s migration minister announced that migrants would be required to register in the new camp, or their asylum claim would be withdrawn.

“Installation in the new structure is not optional,” said Notis Mitarakis. “It is mandatory. When someone has entered our country, he is obliged to respect its laws. Any pressure will not change this policy.”

But as she waits for her baby, Sakha dreams of leaving Lesbos.

“When I see the kids around in this situation I lose all hope for the future,” she said. “I don’t have hope for myself or my baby. I want to go but I don’t have that power.”