American Airlines has imposed an indefinite ban on a passenger after she handed a flight attendant an expletive-laden handwritten note calling her, among other things, ‘a glorified maid’ and a ‘mask Nazi.’

The incident took place on September 3 and was purportedly sparked by a dispute over the airline’s policy requiring all passengers to wear face coverings in an effort to prevent the spread of COVID-19.

One traveler apparently took umbrage at being asked to cover her nose with her face mask and decided to make her feelings known to one of the flight attendants. 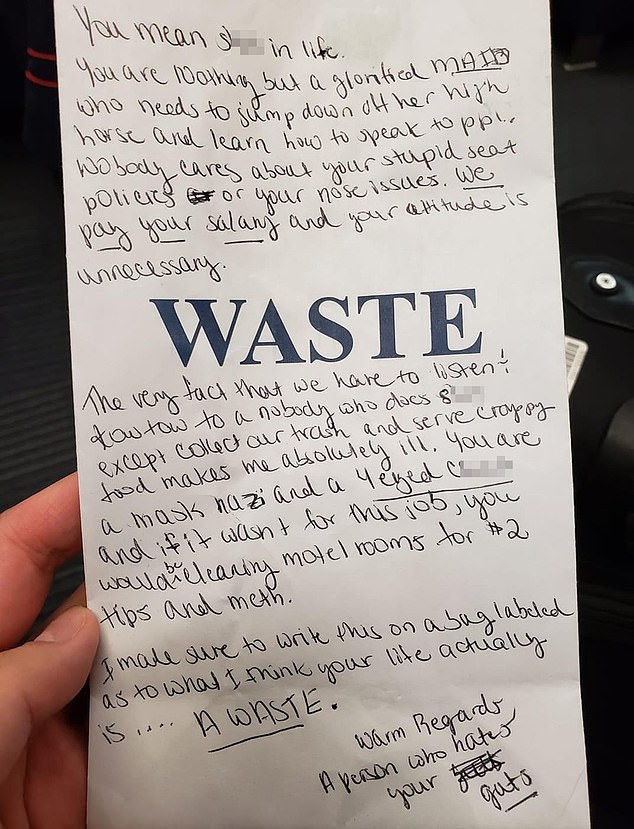 When the flight reached its destination, which has not been revealed, and passengers were getting off the plane, the disgruntled traveler handed the flight attendant a note written on a folded paper bag marked ‘WASTE.’

Twitter user @hibiscuslacoix shared a screenshot of the profanity-filled derogatory screed later that same day, writing: ‘today a passenger handed this to a flight attendant upon deplaning. the flight attendant had asked her to wear her mask over her nose.’

The note opened with the words: ‘You mean s*** in life. You are nothing but a glorified maid who needs to jump down off her high horse and learn how to speak to ppl [sic]. Nobody cares about your stupid seat policies or your nose issues. We pay your salary and your attitude is unnecessary.’

The indignant passenger continued, further ratcheting up her rhetoric: ‘The very fact that we have to listen & kowtow to a nobody who does s*** except collect our trash and serve crappy food makes me absolutely ill. You are a mask nazi [sic] and a 4 eyed c*** and if it wasn’t for this job, you would be cleaning motel rooms for $2 tips and meth.’

The author of the vile missive directed at the unsuspecting American Airlines employee concluded by explaining her decision to write it on a bag intended for the disposal of refuse.

‘I make sure to write it on a bag labeled as to what I think your life actually is… A WASTE,’ she clarified. 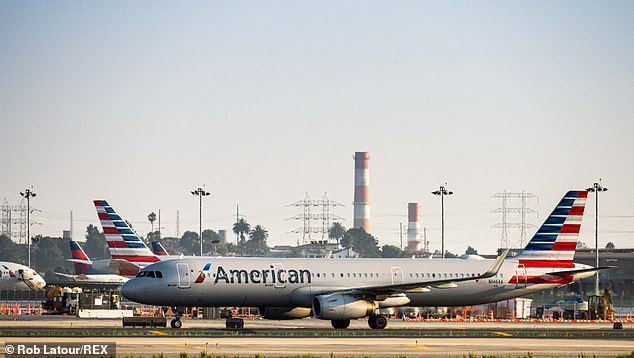 The infuriated passenger did not use her name when signing the letter, instead writing, ‘a person who hates your guts.’

American Airlines has confirmed the incident involving the offensive note and said it is investigating.

Airline spokesman Curtis Blessing told McClatchy News in a statement that the passenger’s ability to fly American has been suspended.

‘Our flight attendants are professionals who play a critical role in ensuring the health and safety of our passengers, and we will not tolerate mistreatment of them,’ he added.