An anti-capitalist organization who started the Occupy movement in 2011 have vowed to ‘draw wind’ from BLM protests tearing through the country and to ‘lay siege to the White House’ for 50 days.

Adbusters, a non-profit environmentalist organization based in Canada – who are known for spurring the Occupy Wall Street movement in 2011 – have announced plans to ‘lay siege’ to the White House from 17 September until the 3 November.

The group describe themselves as ‘a global network of artists, activists, writers, pranksters, students, educators and entrepreneurs’ whose goals involve advancing a ‘new social activist movement’.

In a post on their website titled ‘#WhiteHouseSiege – Tactical Briefing #1’, the activists say: ‘It’s time again for dramatic, decisive action.

‘Which is why, on September 17th, in the original and enduring spirit of Occupy, we and tens of thousands of our fellow citizens will stream into Lafayette Square, in Washington. D.C.’ 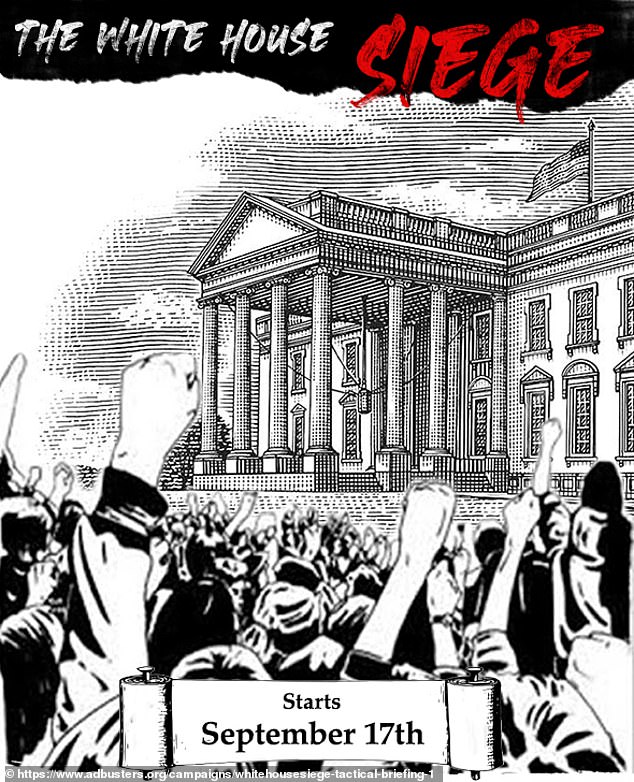 Adbusters posted this image with their ‘tactical briefing’, which details a plan to ‘lay siege’ to the White House on 17 September

Adbusters Media Foundation is a non-profit organization based in British Columbia, Canada.

It describes itself as a ‘a global network of artists, activists, writers, pranksters, students, educators and entrepreneurs who want to advance the new social activist movement of the information age.’

Since 1989, it has published a bi-monthly issue of the consumerism-challenging magazine ‘Adbusters’.

The organization has sparked numerous campaigns including Occupy Wall Street.

In mid-2011 they sent out an email to their subscriber list suggesting a peaceful occupation of Wall Street.

Their goal was to challenge corporate influence, wealth disparities, and the failure of officials to hold those responsible for the 2008 financial crisis to account.

The group said the date was chosen to coincide with the ninth anniversary of Occupy Wall Street, when thousands of protesters occupied NYC’s Zuccotti Park to demonstrate against economic inequality.

The movement set off a chain reaction with similar demonstrations carried out across the globe.

Adbusters named BLM in their call to action, who are currently embroiled in protests against police violence across the US.

‘#Whitehousesiege will electrify the U.S. election season — and it doesn’t stop there. Drawing wind from #BLM, #MeToo, and #ExtinctionRebellion and protests against Trump’s lethal bungling of coronavirus, we’ll inspire a global movement of systemic change — a Global Spring — a cultural heave towards a true world order.’

The Canada-based activists claim that ‘inequality has soared’ and that ‘not a single Wall Street CEO spent a night in jail for his role in the 2008 financial meltdown’ in the years since 2011.

The focus of their campaign, however, is US President Donald Trump, who they call a ‘howling void of a president’ with ‘sins too many to name […] sitting smugly atop a corona death-toll that may surpass two-hundred thousand Americans by Christmas’.

According to their website, the group hopes their movement – which they say will be nonviolent – will go global.

‘A siege only works if it is sustained,’ their post reads. 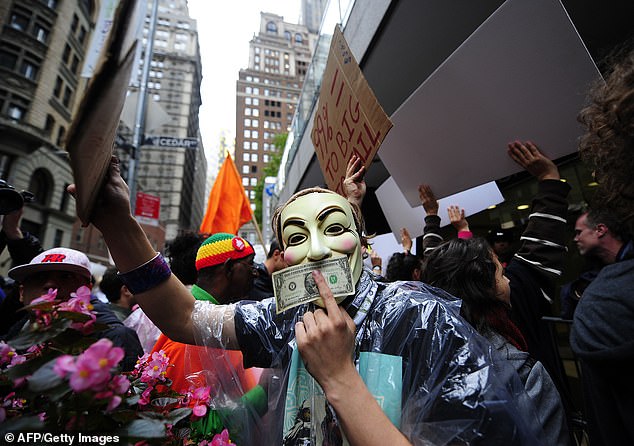 ‘We witnessed this — the multiplying power of a strategic occupation — nine years ago. You dig in, hold your ground, and the tension accumulates, amplifies, goes global.’

Adbusters kicked off the Occupy movement in 2011 by proposing the peaceful protest near Wall Street through their email subscriber list.

However, they are not in control of the movement, which is now represented worldwide.