Melburnians are unhappy, and it’s not just the ‘tinfoil hat wearing brigade’ the police would have you believe.

On Sunday, hundreds of Melburnians took to the streets to protest Victorian Premier Daniel Andrews’ continued lockdown of Victoria’s citizens. 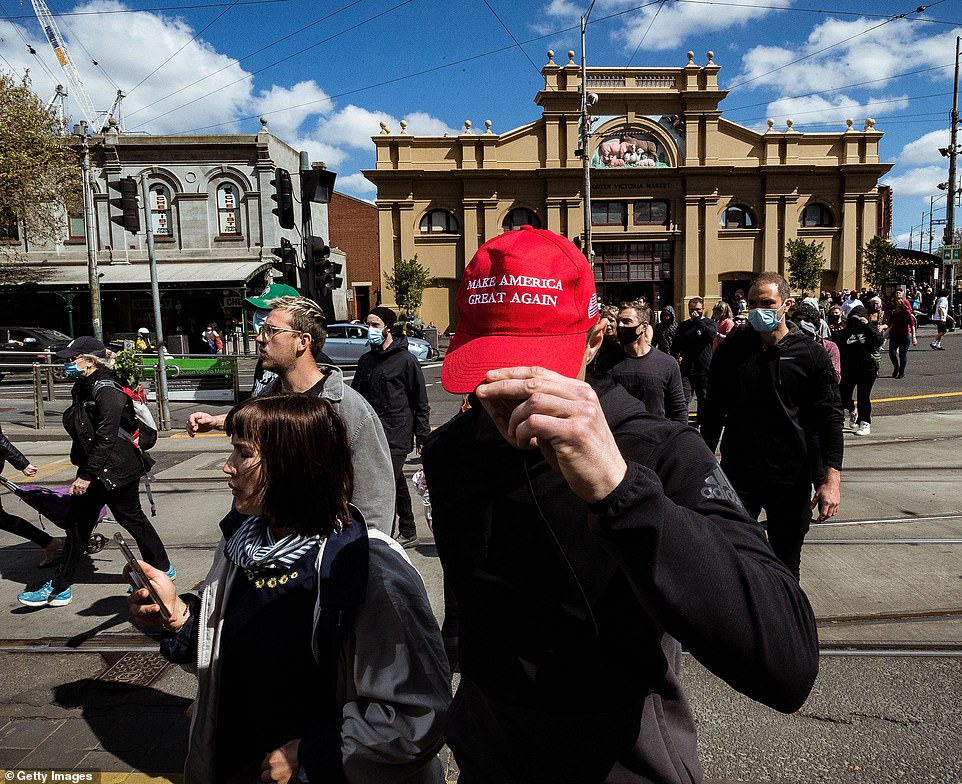 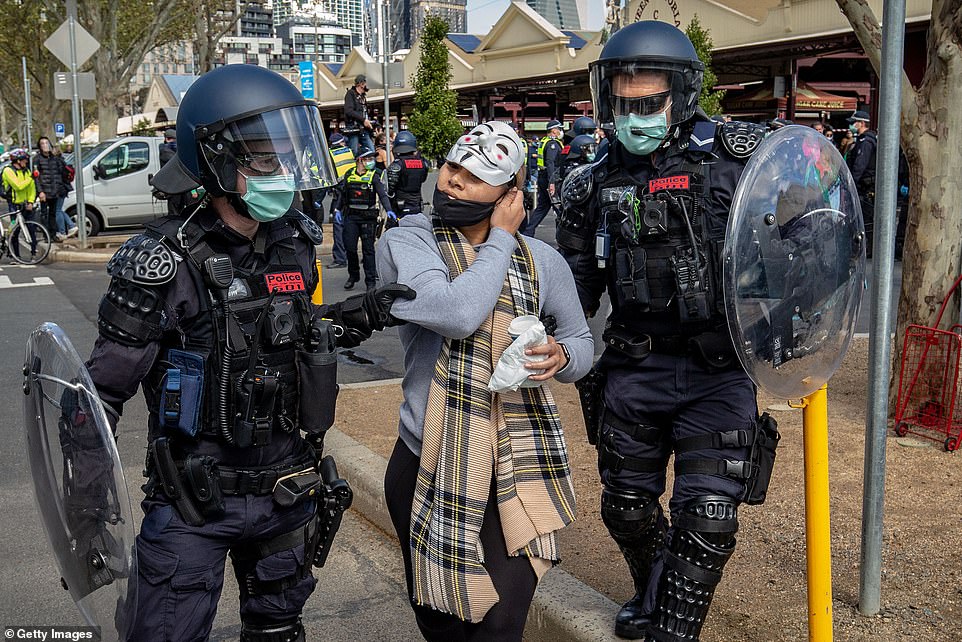 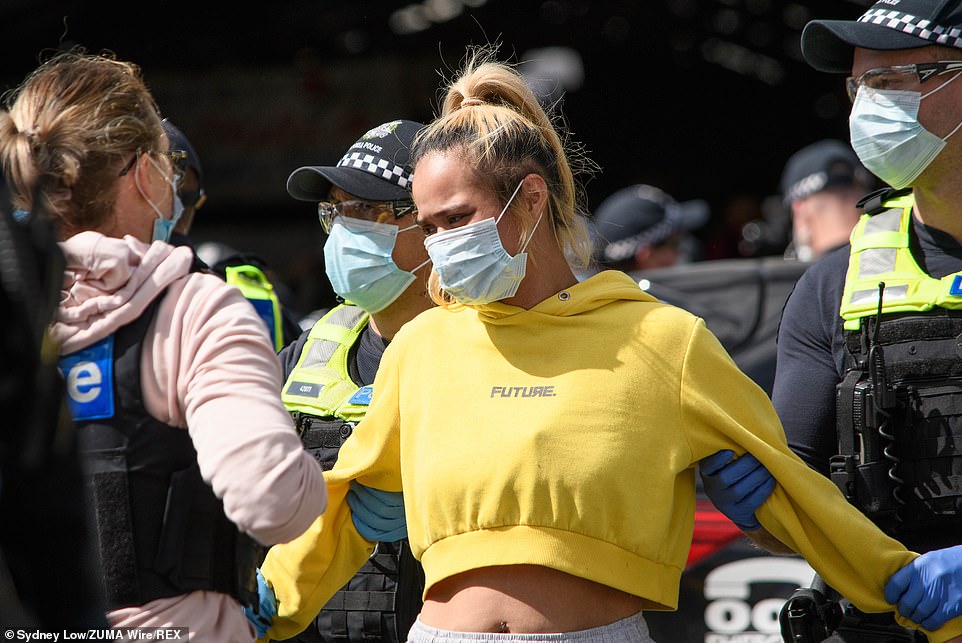 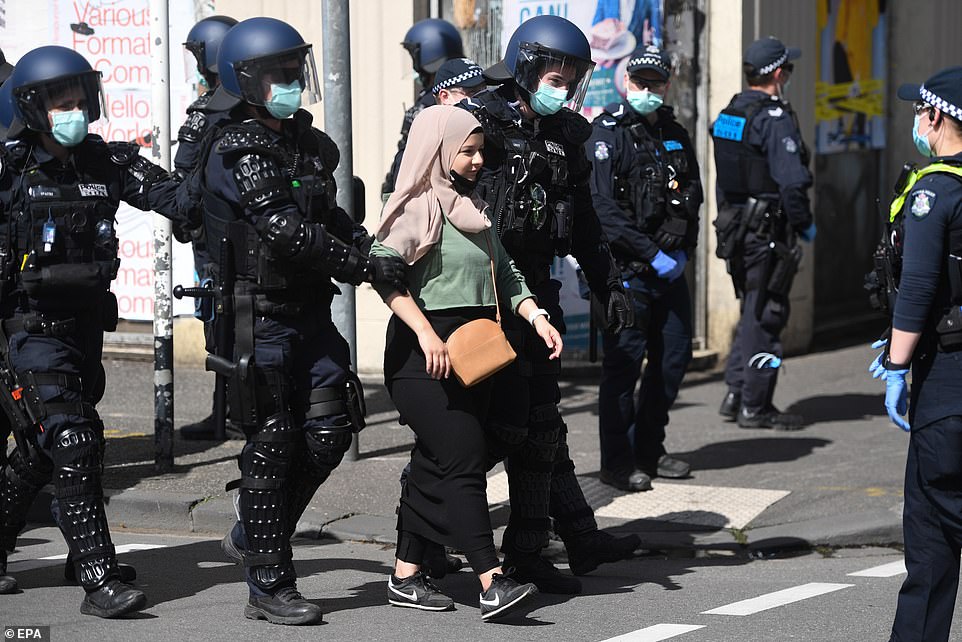 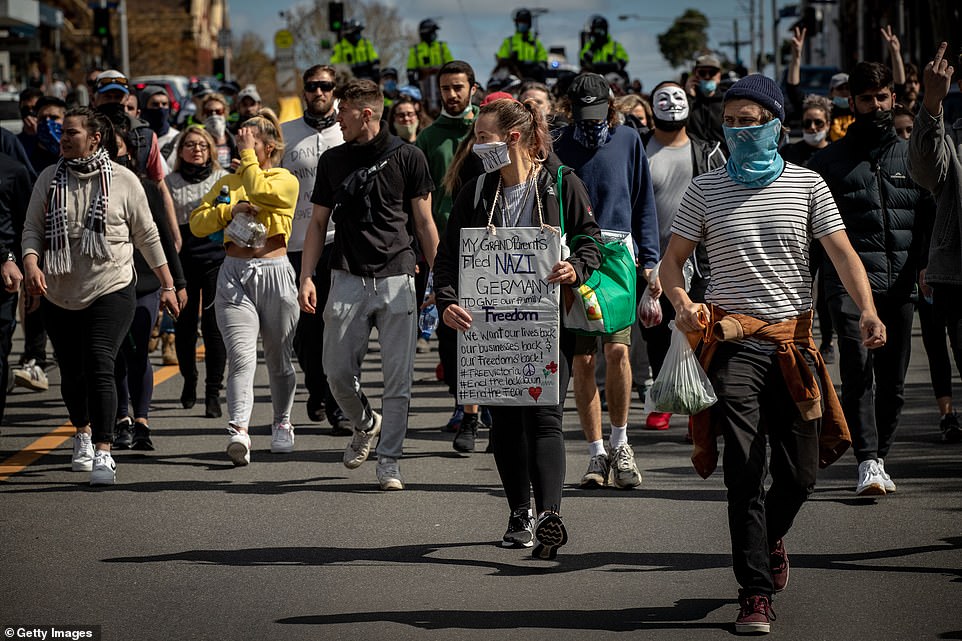 Under Stage Four lockdown restrictions, protesting is now banned across the state, with those even thinking about attending dragged out of their homes in handcuffs by enthusiastic police.

Melburnians fortunate enough to live within walking distance of the Queen Victoria Market were presented with disturbing scenes as their weekend shop quickly turned into a warzone.

Ordinary market shoppers were not to know it was going to happen.

If reports are accurate, those planning to protest on Sunday had very little time to get there themselves.

Social media is no longer a safe place for Victorians to vent their spleens on matters such as public gatherings.

Not unless you’re among the vocal fans of the Victorian premier shouting down all who would oppose his iron-clad beliefs.

A day earlier, as the skies opened over Melbourne with an icy blast, police may have carried false hope that tensions across Melbourne had simmered.

On Saturday, they had arrested just 14 people – no doubt die-hard believers in democracy considering the atrocious conditions outdoors.

The arrests obviously did little to deter up to 250 Victorians marching on the market to voice their objections to the premier’s lockdown.

Of course, the usual troublemakers were on deck at the market too.

Some hurled fruit at police and others ranted about paedophiles running the country.

But the ordinary Australians far outnumbered the ‘crazies’ Victoria Police like to refer as the only people who seem to protest over lockdown.

People held placards declaring their grandparents had fled Nazi Germany to live a life of freedom in Australia.

‘We want our lives back’, a sign begged. ‘Our businesses back, our freedom back.’

These people looked nothing like the kind of person Victoria Police assistant commissioner Luke Cornelius describes.

The tough-talking police big-wig has been sinking the boot into Victorians who would dare protest for weeks now.

On Friday, he turned on another brave display from the comfort of his pulpit at police headquarters. 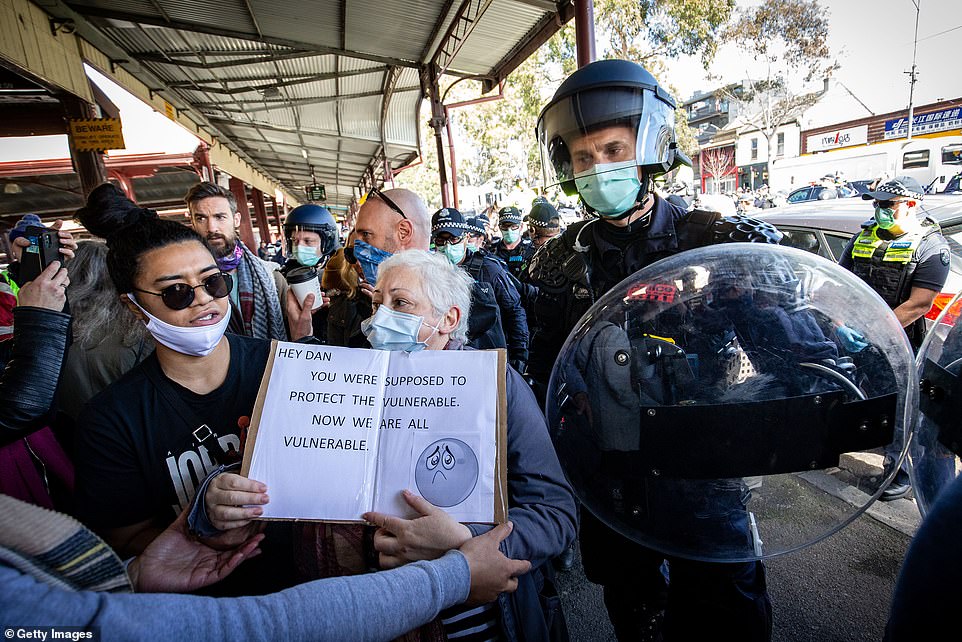 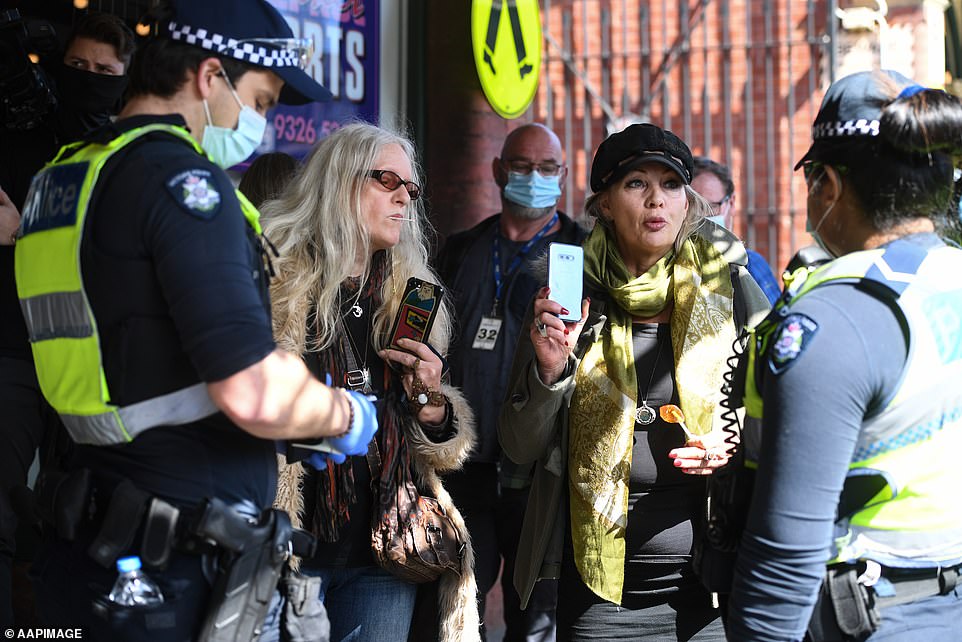 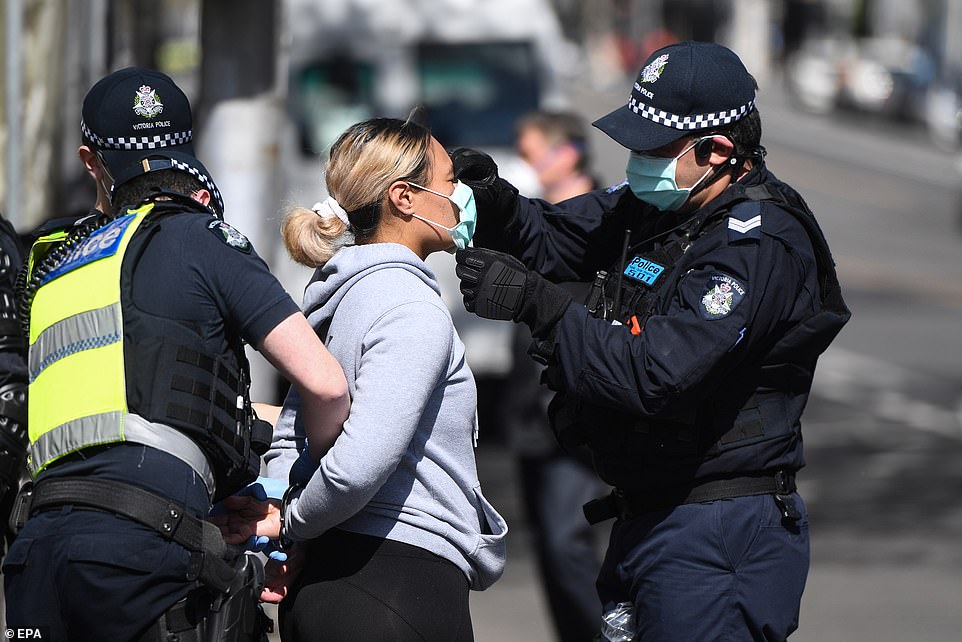 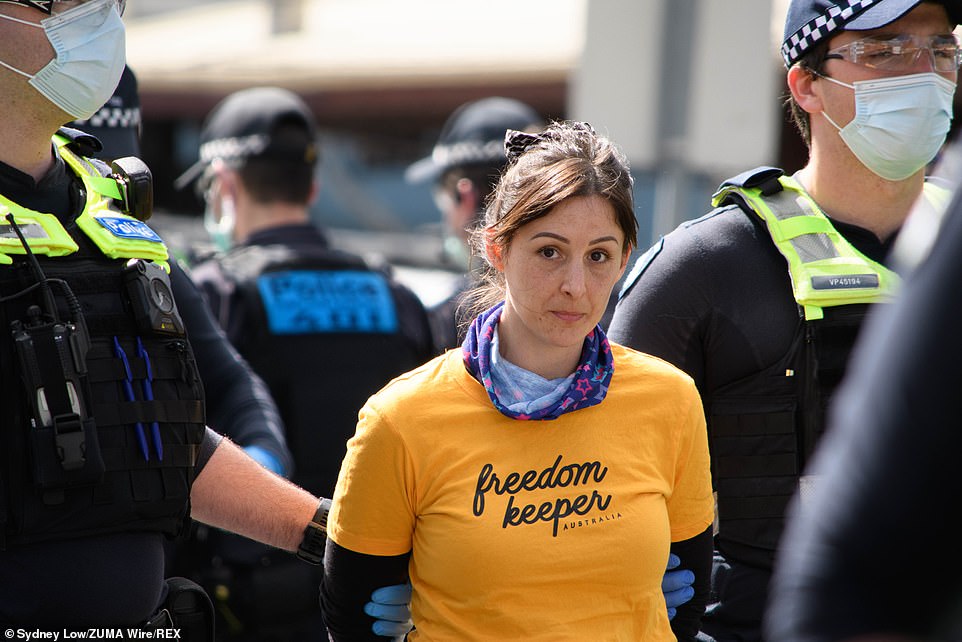 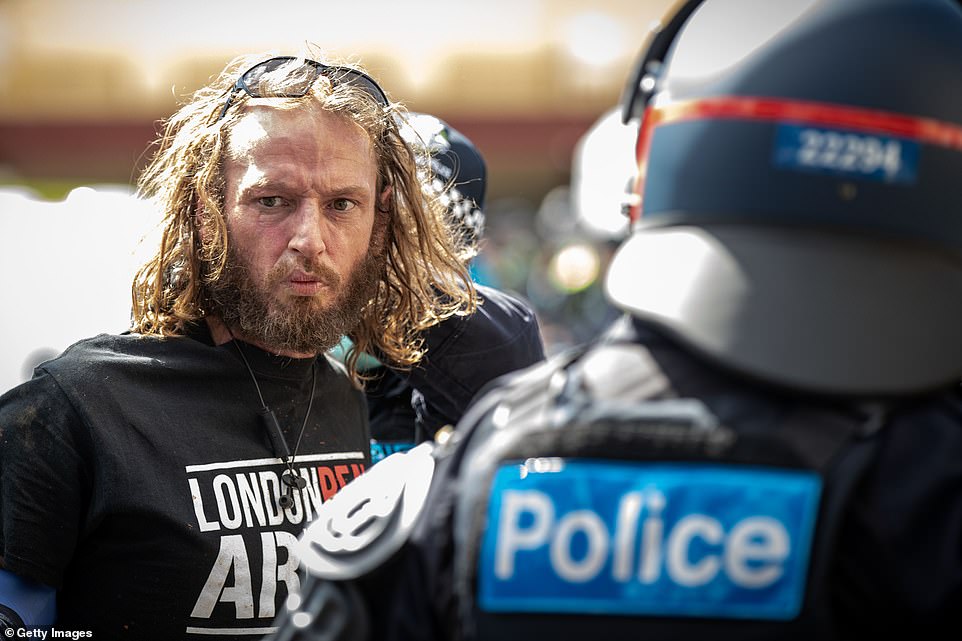 Mr Cornelius had warned that police would be ready and waiting for anyone who turned-up to the protest – and Melburnians by now know he wasn’t kidding.

‘If people were less selfish and a bit more grown up, we wouldn’t have to keep doing this,’ Mr Cornelius said.

Earlier that week police had done their best to dismantle the planned ‘Melbourne Freedom Walk’.

Police raided the home of Middle Park man Tony Pecora on Thursday as part of an investigation into the ‘co-ordination and encouragement of protest activity’.

Organisers claimed the walk to be legal and asked citizens to ‘come together, get healthy and talk about getting our freedoms back’.

‘Don’t take us for fools,’ Mr Cornelius warned. ‘We’ll have no hesitation in issuing fines.’

Police have also had no issue with tearing people from their cars and spraying others in the face with pepper spray for the simplest of resistance to their demands during Stage Four lockdown.

‘They’re taking every opportunity to leverage the current situation to serve their ridiculous notions about so called sovereign citizens, about constitutional issues and about how 5G is going to kill your grandkids,’ he said of a previous protest. 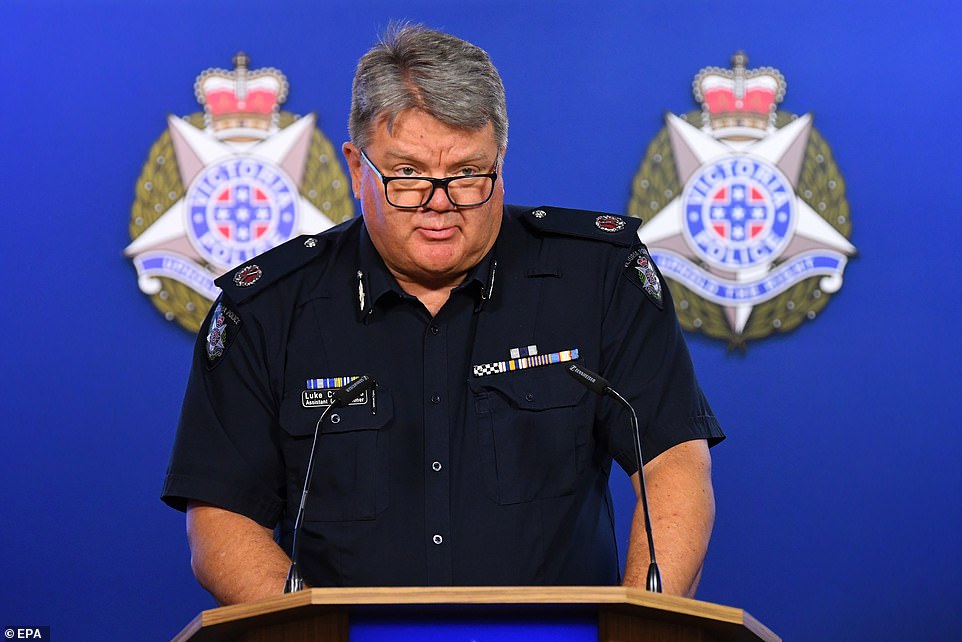 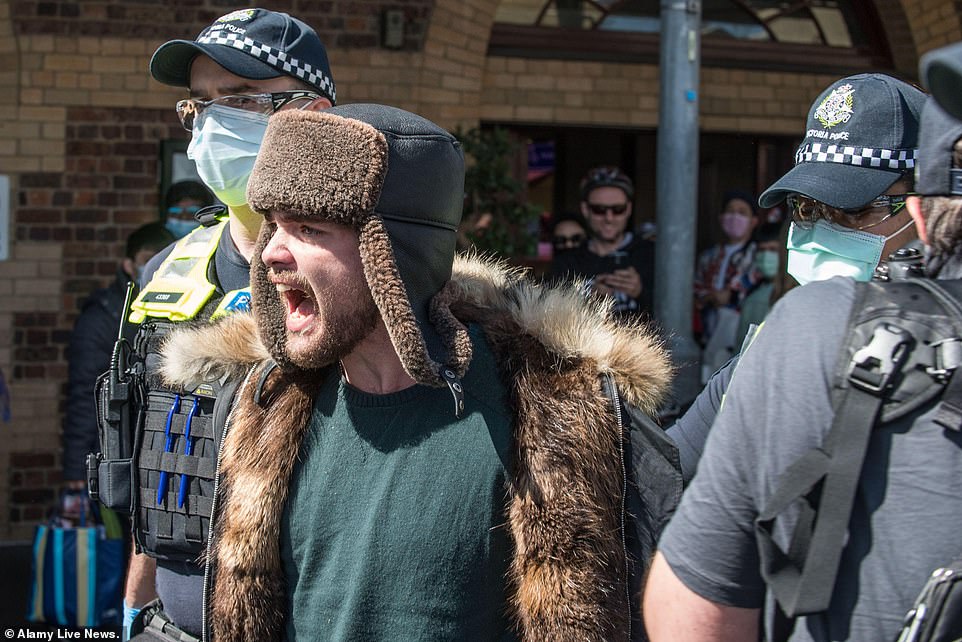 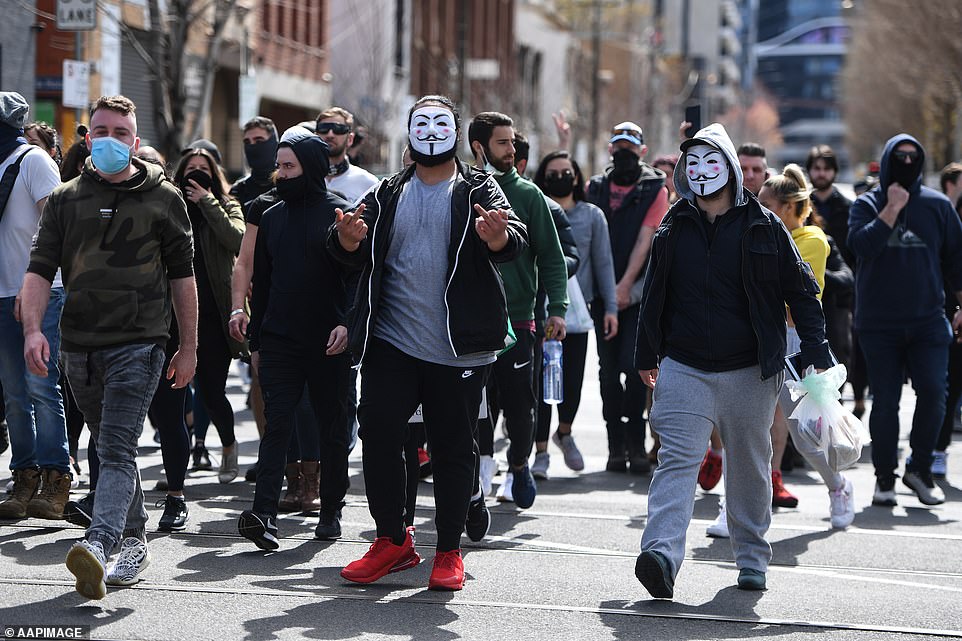 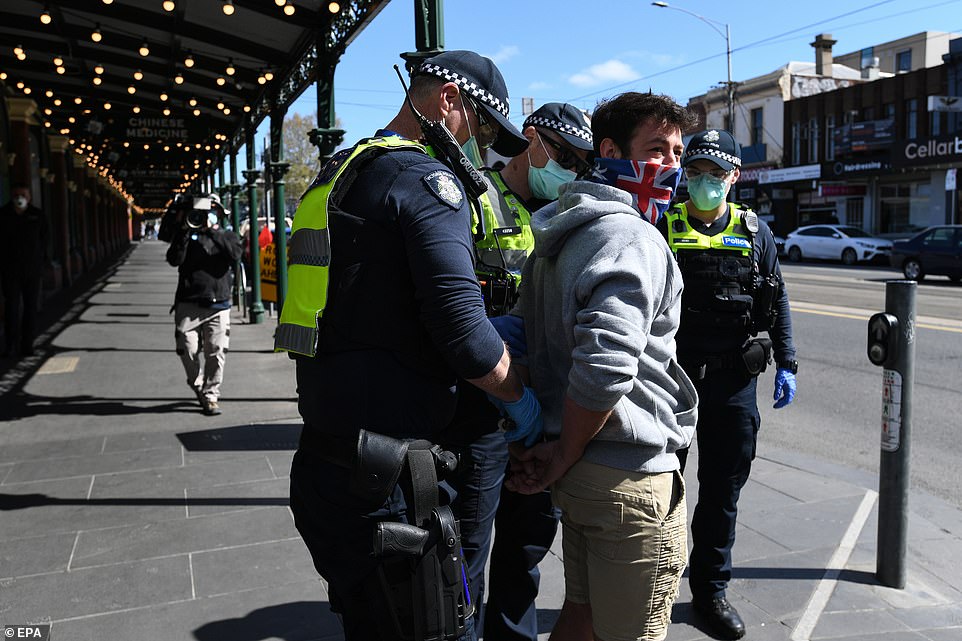 Previously an anti-lockdown rally was held at the Shrine of Remembrance in Melbourne, resulting in 17 arrests and more than 160 fines being issued for breaching government health directions 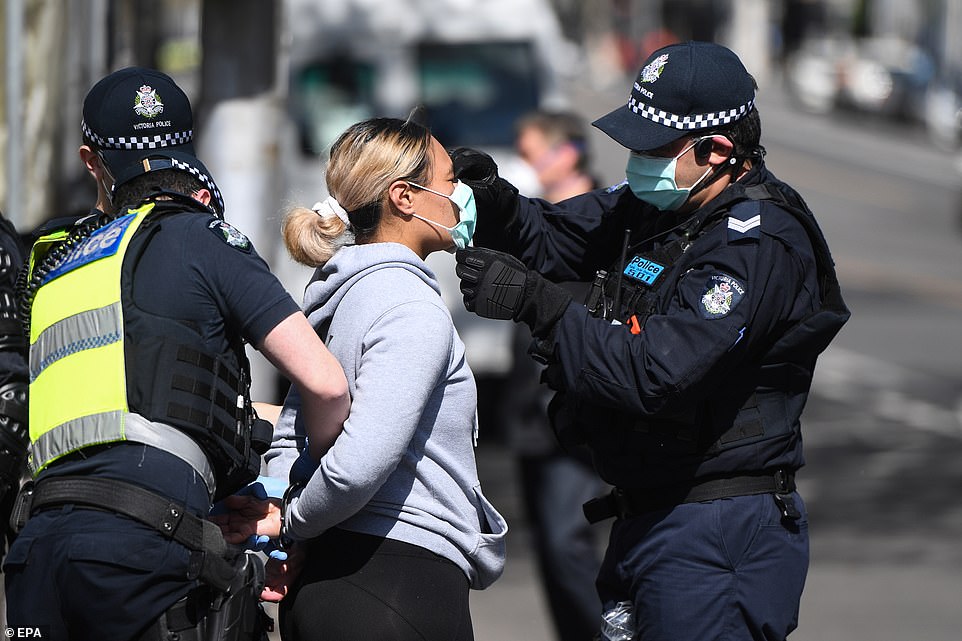 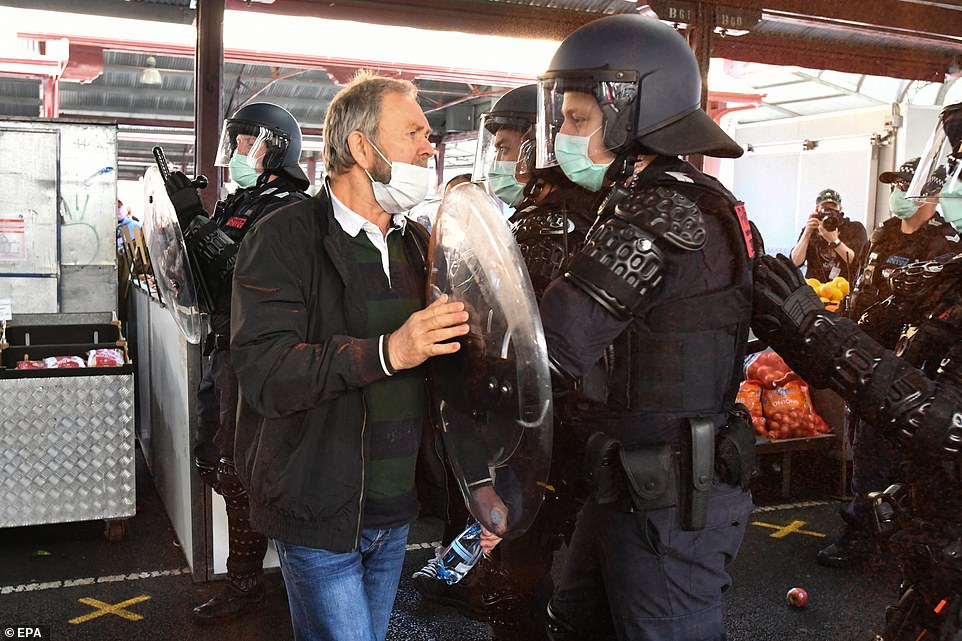 Police officers on Sunday resembled the sleeve of an old Mad Max VHS video tape. They wore helmets, masks and body armour from head to foot and carried shields 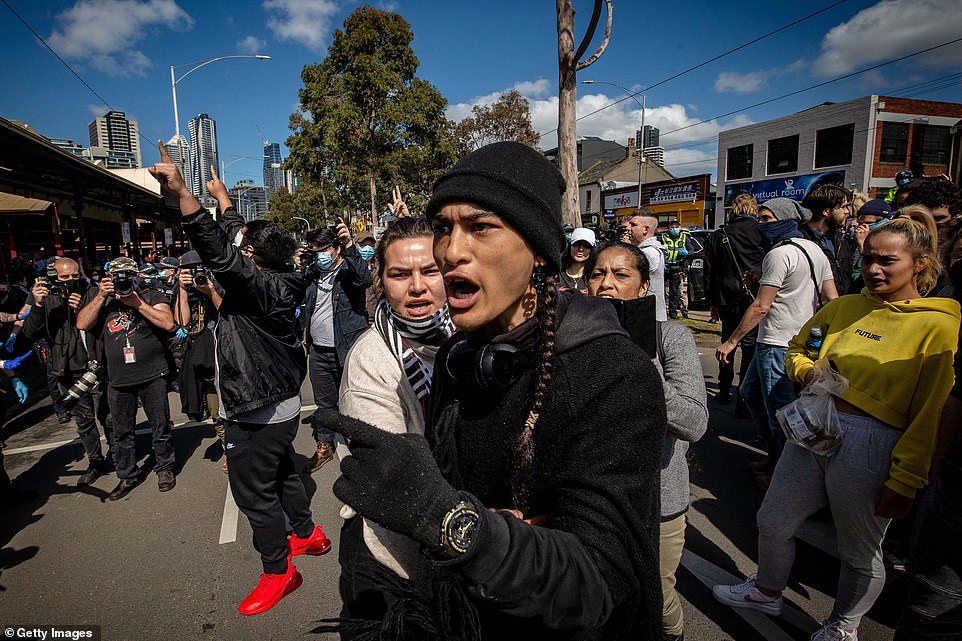 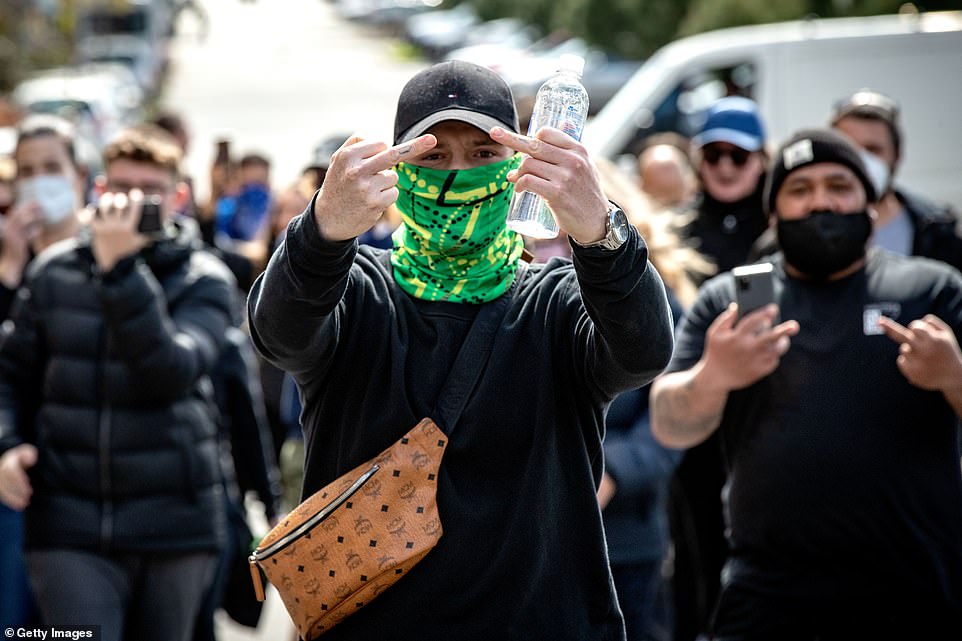 Metropolitan Melbourne remains under stage four lockdown restrictions, with people only allowed to leave home to give or receive care, shopping for food and essential items, daily exercise and work while an overnight curfew from 8pm to 5am is also in place 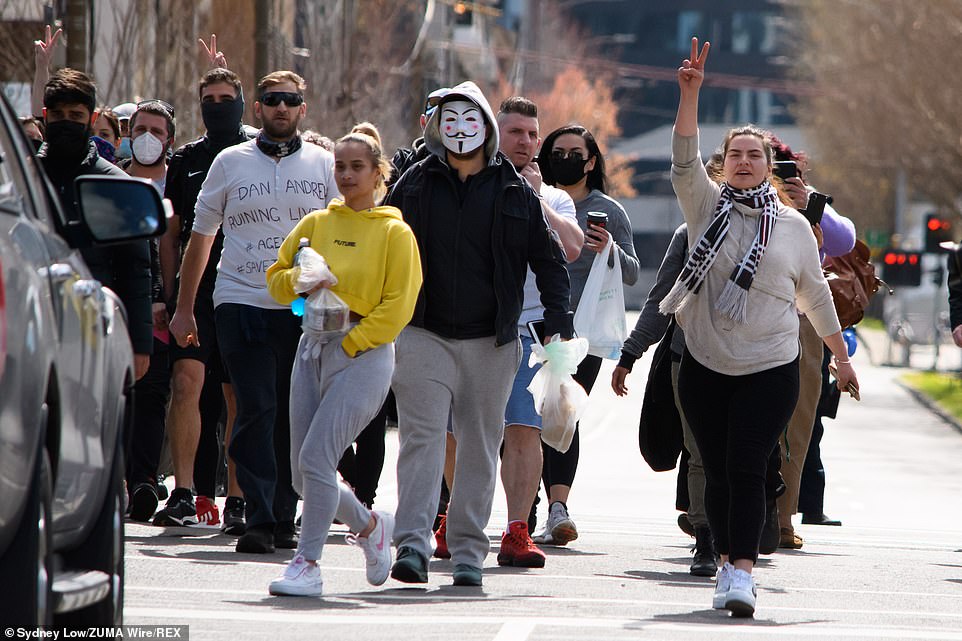 About 1,100 people had shown interest in Sunday’s walk and 340 had committed to attend before Facebook took down the event’s online page on Wednesday

Down on the mean streets, police walking the beat wish the boss would head back to his office for a coffee and shut his mouth.

‘If it was (Police Commissioner Shane) Patton, who has been catching crooks since he was a teenager spouting off like that maybe we could take it,’ an officer told Daily Mail Australia.

‘He [Cornelius] kicks back with a port at night watching us deal with the mess on TV.’

About 1,100 people had shown interest in Sunday’s walk and 340 had committed to attend before Facebook took down the event’s online page on Wednesday.

While some of those people Mr Cornelius described were no doubt within the market protesters, they were by no means in the majority.

Nor were they the majority in Dandenong when ordinary residents gathered to walk along the local creek there just weeks ago.

On Sunday, those Melburnians took a stand against a lockdown they honestly believe is wrong.

By the end of the day, Victoria Police had arrested 74 of them and handed out 176 fines.

Rewind to June 6, when close to 10,000 protesters gathered at Parliament House on Spring Street and marched to Flinders Street Station.

Police stood back and let them march.

Protesters carried placards reading: ‘We need a new system’ and ‘Injustice anywhere is a threat to justice everywhere’.

At one point, masked police formed a line and stood silently as protesters punched the air and chanted ‘F**k the police’. 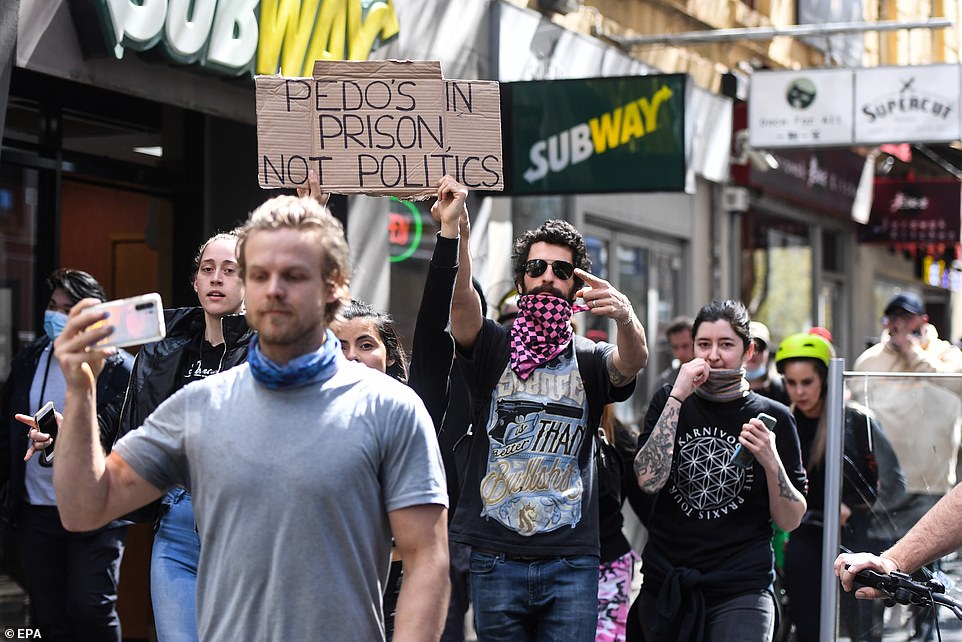 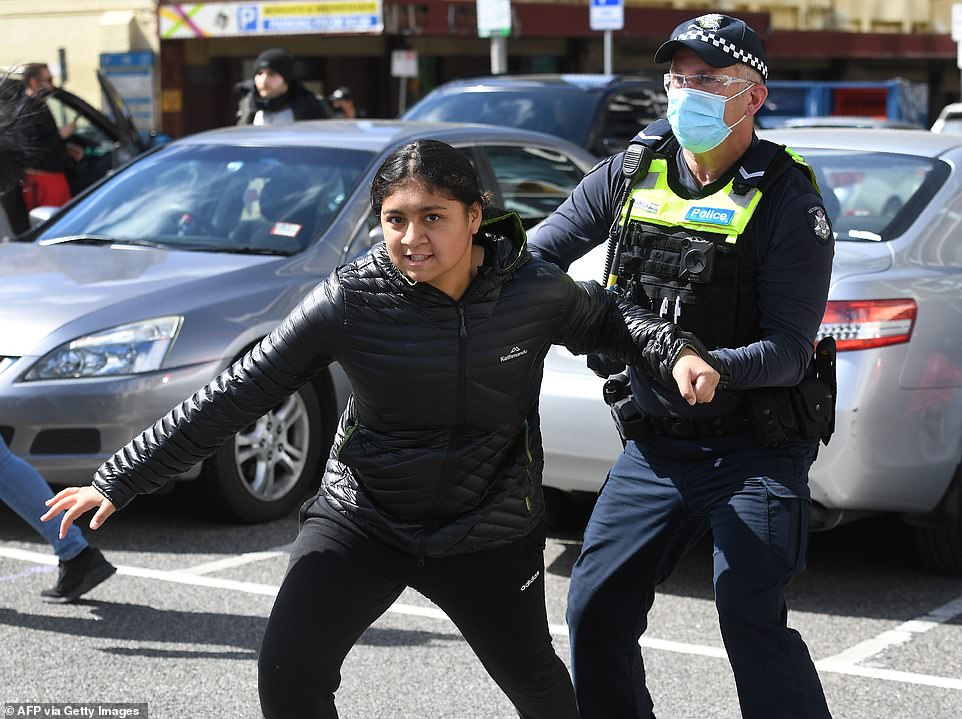 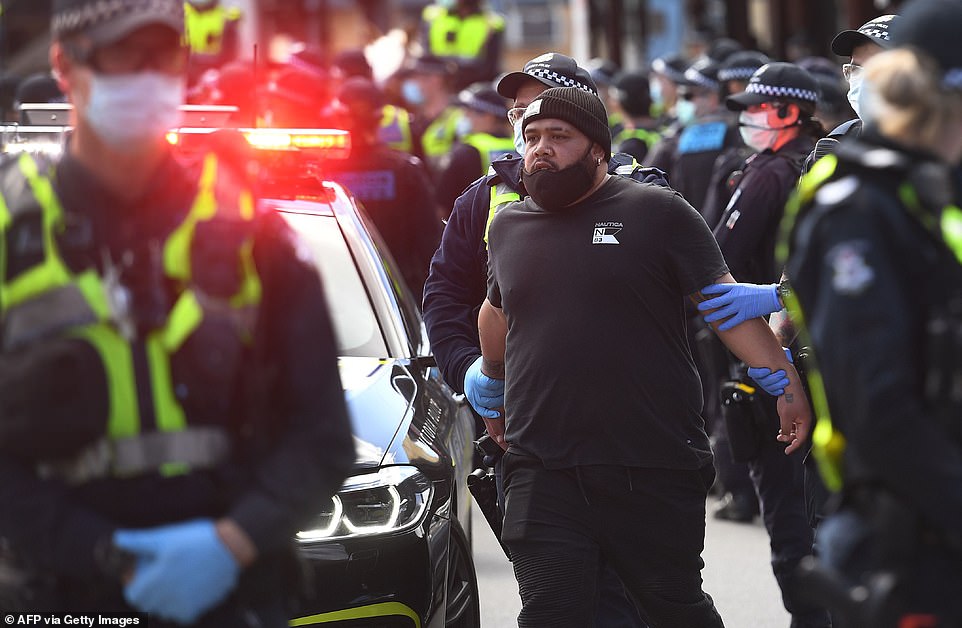 Police arrest another protester near the Queen Victoria Market on Sunday 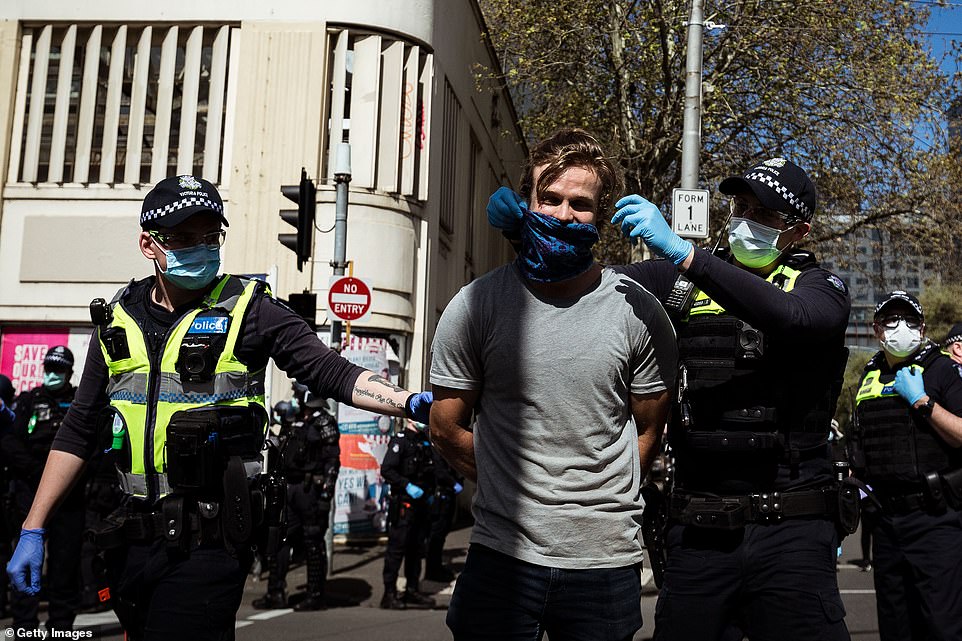 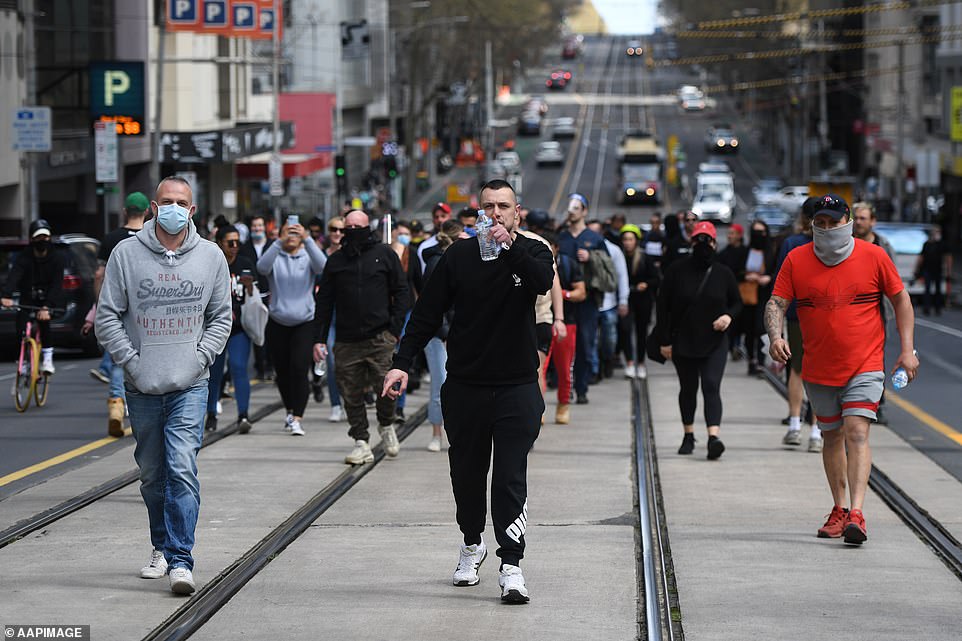 Protesters march through the CBD during an anti-lockdown protest in Melbourne on Sunday, September 13 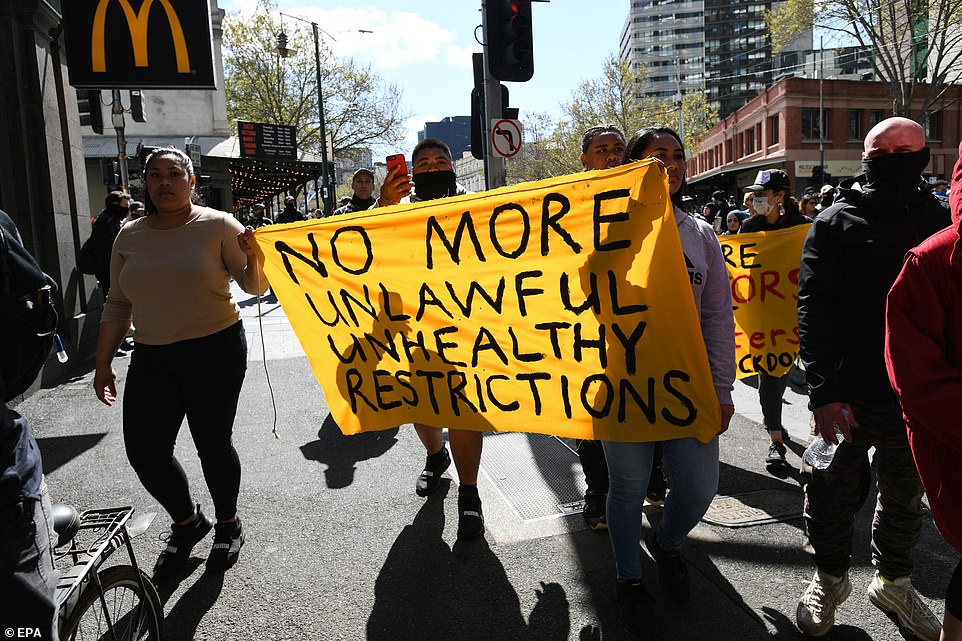 On Sunday, those Melburnians took a stand against a lockdown they honestly believe is wrong. By the end of the day, Victoria Police had arrested 74 of them and handed out 176 fines 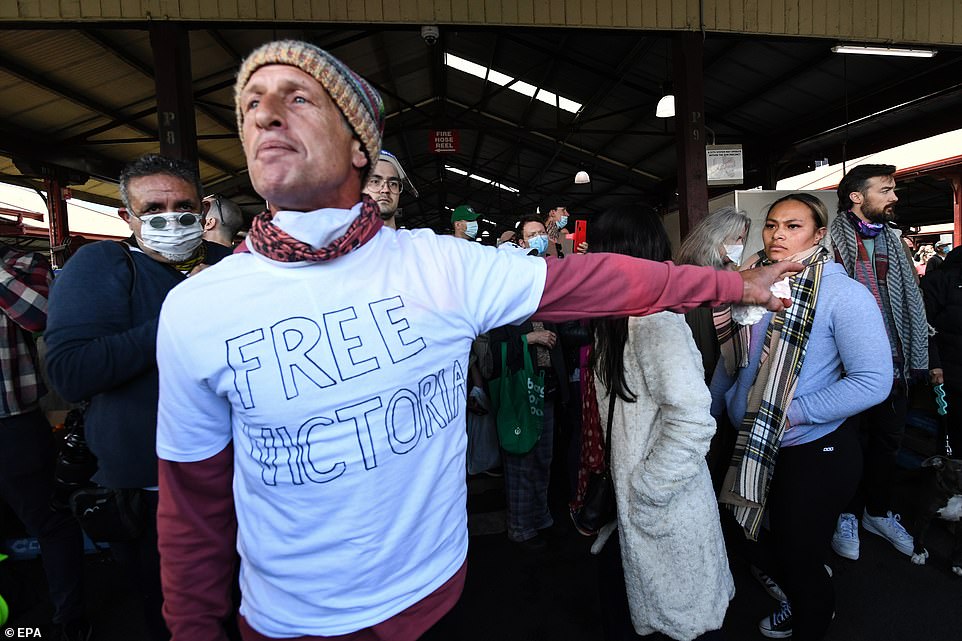 Melburnians are unhappy, and its not just the ‘tinfoil hat wearing brigade’ the police would have you believe 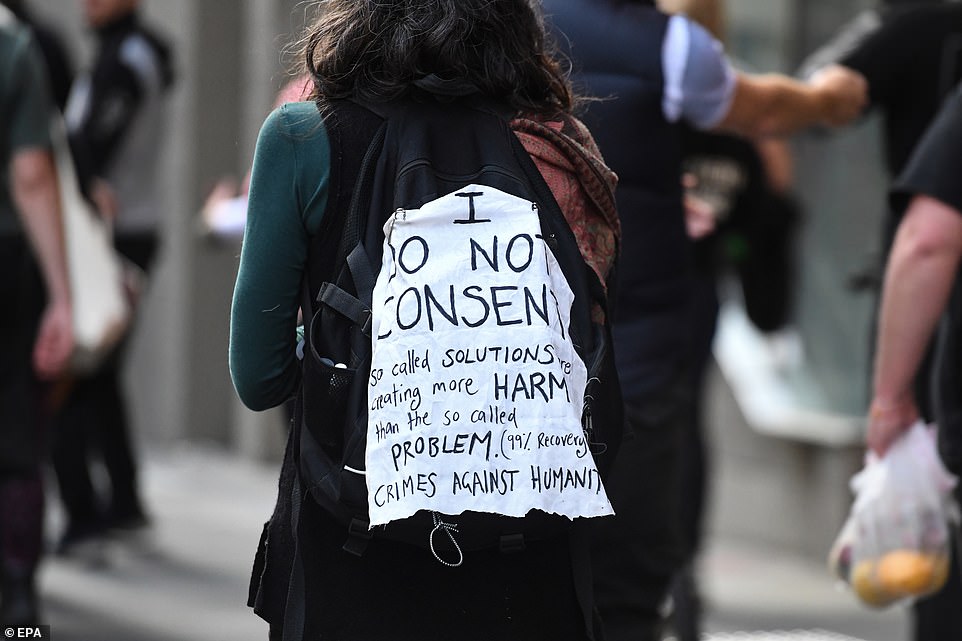 Protesters carried placards reading: ‘We need a new system’ and ‘Injustice anywhere is a threat to justice everywhere’

But this is Melbourne in September 2020, and things have changed a lot since June.

They wore helmets, masks and body armour from head to foot and carried shields.

Officers bravely galloped on horseback into the fray and arrested everyone they could get their hands on.

On Monday, as Victoria recorded 35 new cases of coronavirus – the lowest daily increase since 33 cases were recorded on June 25 – many are left wondering if someone can do the same for Australia. 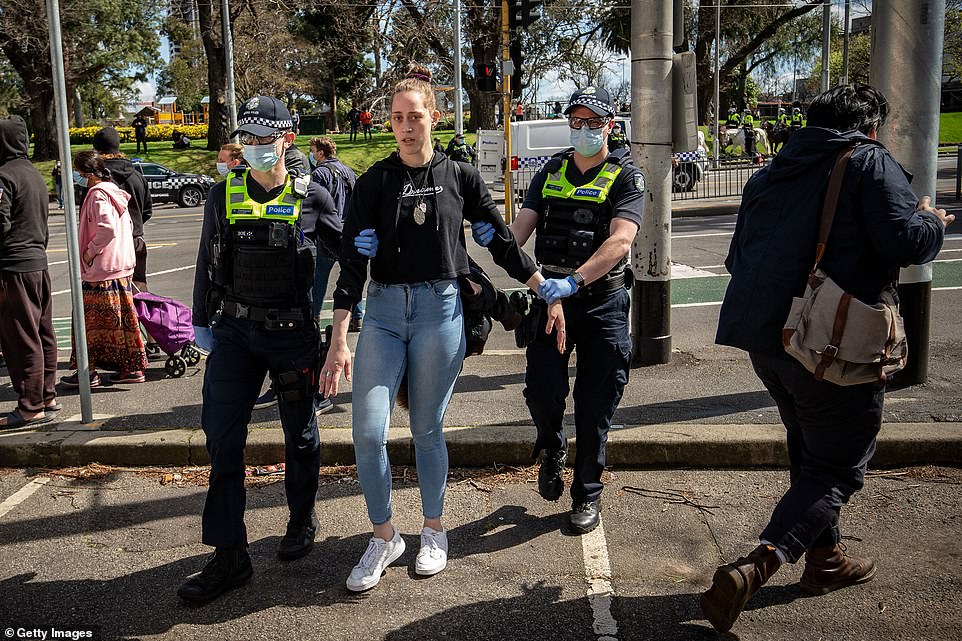 On Sunday, hundreds of Melburnians took to the streets to protest Victorian Premier Daniel Andrews’ continued lockdown of Victoria’s citizens 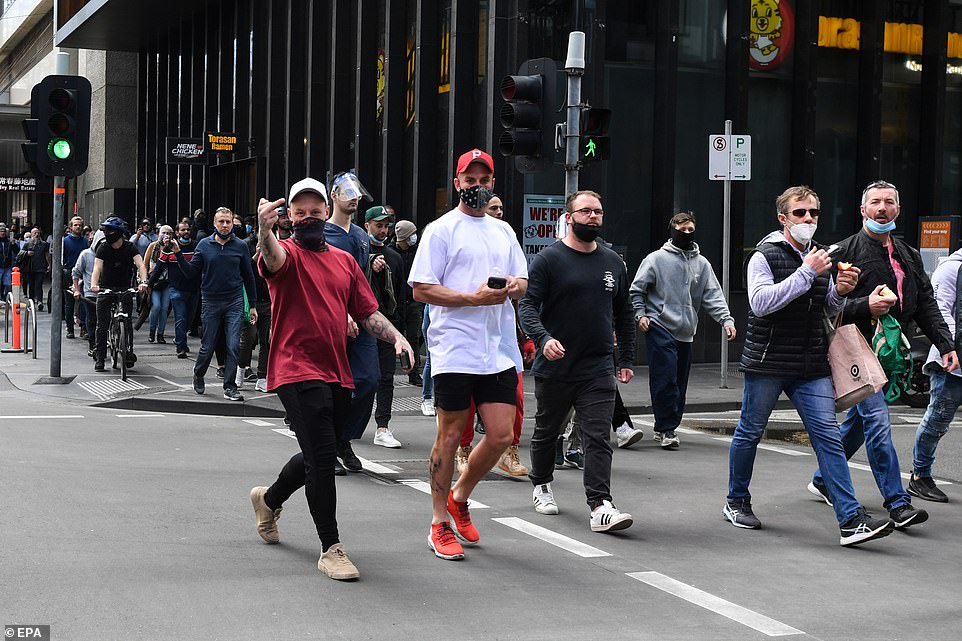 Young women in active wear joined young men in caps and masks, Muslims in hijabs, beard-stroking hipsters and toffs in their Sunday finest