The Archbishop Bishop of Canterbury has warned against coronavirus restrictions being imposed centrally and is said to be ‘deeply concerned’ about the impact of the rule of six on family life.

The Most Rev Justin Welby said the Government had ‘determined the daily details of our lives’ during the coronavirus lockdown in a way ‘few of us have experienced’, as he argued instead for localism.

He said Britain has an ‘addiction to centralisation’ and argues that the country should take on the attitude: ‘Only do centrally what must be done centrally’.

The Archbishop is also said to be concerned about the impact of the ‘rule of six’ – banning gatherings of more than six people indoors and outdoors – on ‘the vulnerable, the needy, the poor and the elderly’ in Britain. 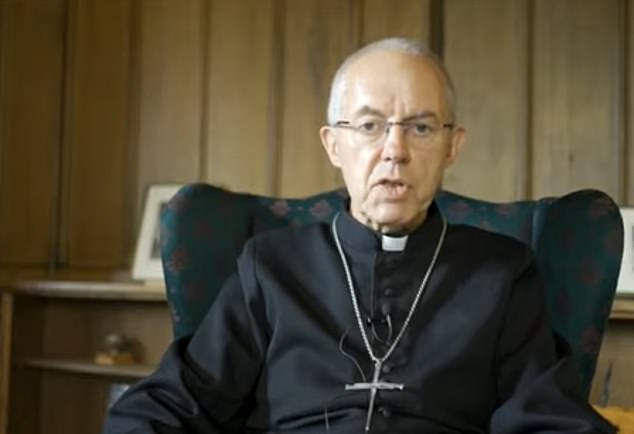 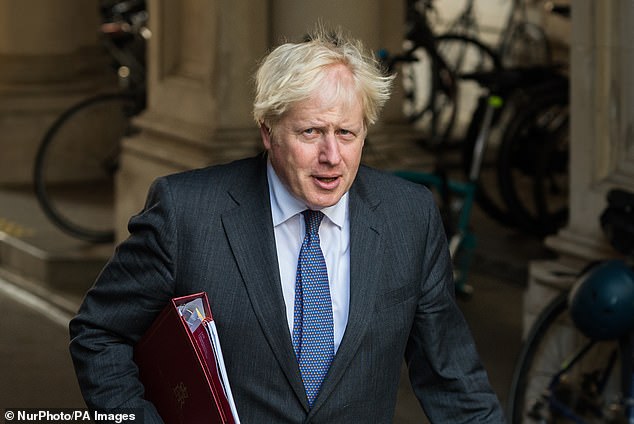 Writing in the Daily Telegraph, the archbishop said: ‘It makes sense to look instinctively for central direction in such an acute crisis, and we’re indebted to the roles many played in doing so, especially those who organised the NHS to cope with the increased demand.

How to practice safe six

OFF: All gatherings of more than six people will be illegal, putting the traditional family Christmas at risk.

A family of five will be allowed to meet only one grandparent at a time, while families of six or more will be banned from meeting anyone.

ON: The only exemption is if a household or a support bubble is made up of more than six people.

Support bubbles allow adults who live by themselves – as well as single parents – to join up with one other household.

OFF: All social gatherings of more than six – whether a book club, dinner party or picnic – are banned.

Police will have the power to break up bigger groups in parks, pubs and private homes.

An army of ‘Covid marshals’ will be recruited by councils to step up enforcement, patrolling town centres, parks, shopping centres and train stations and encouraging large groups to break up.

People in groups of seven or more face spot fines of £100, doubling with each repeat offence to a maximum of £3,200.

You cannot go to a pub in one group, then join another group. Venues face fines of £1,000 if they do not comply with the rules.

ON: Churches, synagogues, mosques and temples will remain open, although congregations will be required to stay at least a metre apart.

ON: Wedding ceremonies and receptions are exempt from the new rules, and up to 30 guests are allowed but they have to sit or stand a metre apart.

ON: Funerals are also exempt, with 30 people allowed.

ON: Gyms, leisure centres and swimming pools will remain open, as long as they are ‘Covid secure’ and enforce social distancing rules. Yoga or exercise classes with more than six people are allowed.

ON: Grassroots sport is largely unaffected. Recreational sports, including five-a-side football, cricket, rugby and parkruns, can go ahead as long as they follow protocols. But teams of more than six can’t go for a post-match pint together.

ON: Professional sports and elite training can go ahead. Pilot events for reintroducing fans to stadiums can continue, but with a limit of 1,000 spectators.

ON: Schools and universities are not affected by the new rules. But they must continue to operate under existing guidelines.

ON: Youth groups, registered childcare and playgroups are exempt from the rule of six.

ON: Protests can go ahead in groups larger than six, as long as they are ‘Covid secure’.

‘Within the Church there are lessons to be learnt about the role and importance of central guidance and its crucial interplay with government rules that exist for the benefit of all.

‘But with a vaccine still far from certain, infection rates rising and winter on the horizon, the new normal of living with Covid-19 will only be sustainable – or even endurable – if we challenge our addiction to centralisation and go back to an age-old principle: only do centrally what must be done centrally.’

Archbishop Welby is ‘deeply concerned about Christmas and the impact of the “rule of six” on the vulnerable, the needy, the poor and the elderly’, a source said.

They told the paper: ‘He is concerned about families being kept apart and the knock-on effect that has, particularly on people who are on their own.’

The ‘rule of six’ came into force on Monday. It is intended to simplify and strengthen the rules on social gatherings amid rising coronavirus cases.

The policy is also under mounting scrutiny ahead of the run-up to Christmas as critics have questioned why younger children cannot be excluded from the limit in England as has been permitted in Scotland and Wales.

Arguing for a more localised approach to the restrictions, Archbishop Welby said: ‘We are not immune to the temptation to pull more decisions into the centre, to feel that “something is being done”.

‘But it is a temptation that should be resisted. Often that “something” might not be as effective as what could be done locally.

‘When it comes to Covid-19, the importance of local networks and communities becomes even greater. Scotland and Wales have shown that local public health is the best qualified to deal with local outbreaks.

‘Local government, schools and voluntary agencies – including churches – can communicate well, act swiftly and measure risk and consequences on the ground.’ Ends

It comes after Home Secretary Priti Patel irritated critics by insisting that two families meeting by chance in the street and stopping to chat would constitute ‘mingling’ and breach the law.

Speaking to Sky News this morning Ms Patel said: ‘I’m rarely at home but if I saw something that I thought was inappropriate then, quite frankly, I would call the police

‘It’s not dobbing in neighbours, it’s all about us taking personal responsibility.’

Ms Patel said it was a ‘personal choice’ on whether to report breaches but some residents living near her terraced home said they would do the same.

Paula Hall-Strutt, 50, who works in accounts said: ‘She is the Home Secretary so you’d expect her to do that and I would probably do the same – especially if the household had elderly relatives or if people were gathering in really big numbers.

‘My mum is 91-years-old and is particularly vulnerable to this virus so I fully understand why these restrictions have been put in place.

‘It’s important that we do all we can to try and get hold of it.

‘I think people around here use common sense and I don’t think anyone will break the Rule of Six.

‘I won’t be as I don’t really see that many people. My son has had friends round but he’s been very sensible about it.’

Frances Owen, 66, agreed and said: ‘If one of my neighbours had a big party and invited lots of people then I’d not hesitate to do the same as Priti Patel and I’d contact the police or council in a flash.

‘I know the new restrictions the government have brought in have caused a lot of upset and controversy but I believe we need to be as careful as we can.

‘It seems that at the moment it’s a lot of youngsters being quite blasé about Covid and it’s the older people who are going to suffer as a result and I don’t think it’s right.

‘So I have no problem with Priti Patel saying she’d snitch on us – I’d do the same.’ 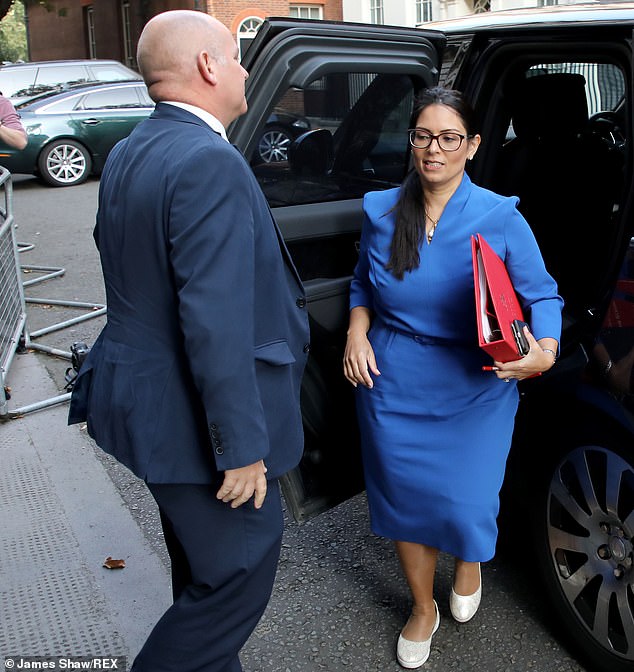 Faisal Aziz, 51, said: ‘I’ve a 10-year-old daughter whose had a fever for the last two days and we are due to have a covid test later today.

‘So I agree with Priti Patel that we should all take responsibility and follow the rules.

‘I have no problem with her calling the police if I or any other neighbour had more than six people over.

‘However unlikely it is to happen, I’d do the same and call the police on her and her husband if they broke the rules.’