Yes, it’s a month late and subject to the restrictions that have derailed many of our favourite programmes, but The Great British Bake Off will finally be back on TV this month.

And for the show’s millions of fans it can’t come soon enough, giving us all the chance to wallow in comfort food in the midst of the ongoing pandemic.

For much of the year a question mark hung over the new series, but its cancellation seemed unthinkable. Could they really make it happen while keeping everyone safe from coronavirus, however? The answer is yes.

In a mammoth undertaking, about 130 people, including crew, contestants, hosts and judges, went into isolation to create possibly the country’s biggest bubble. 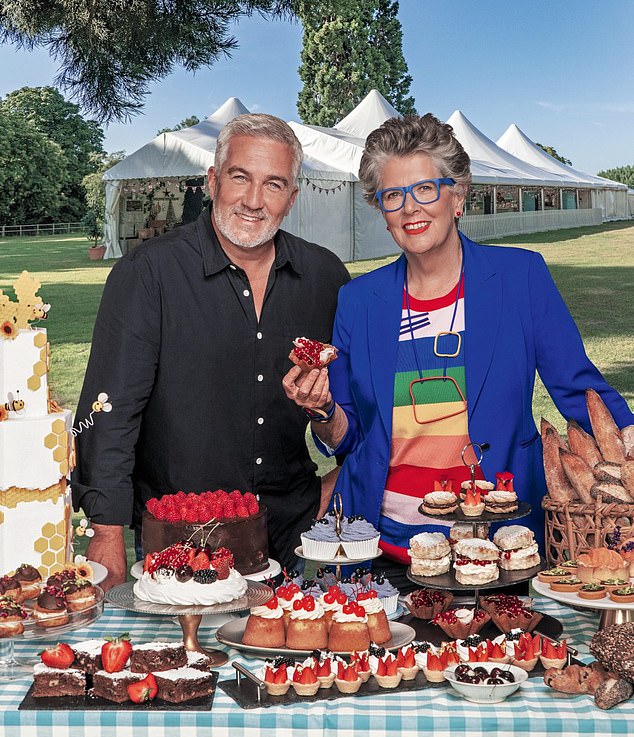 Paul Hollywood, 54, and Prue Leith, 80, (pictured) revealed what viewers can expect from the new series of The Great British Bake Off as it returns to screens this month

The location of this self-contained biosphere was Down Hall in Hatfield Heath, Essex, a country house hotel set in 110 acres of gardens, parkland and woods.

Now, with filming complete, judges Prue Leith and Paul Hollywood have emerged to tell us what we can expect. ‘It was a great series,’ says Prue, 80, via video from her Cotswolds home.

‘To get into this bubble we had to be tested three times in nine days, and during that time we were in strict quarantine. I didn’t leave my house, Paul didn’t leave his, none of the crew or hotel staff could leave theirs. It was as if we were all vulnerable old ladies.’

But it worked. Nobody got sick and filming, usually spread over three months, was condensed into six weeks in July and August.

‘It was a really friendly atmosphere,’ says Prue. ‘We couldn’t go home, so we all socialised more than ever. It must have been the safest place in England. It was a bit like being at Butlin’s.’

‘Yes, it was like camping,’ agrees Paul Hollywood, 54, joining the conversation from his kitchen in Kent.

‘It was like Glastonbury and the tent was the Pyramid Stage.’ Their encampment included shepherds’ huts as hospitality rooms for Prue, Paul and hosts Noel Fielding, 47, and newcomer Matt Lucas, 46, who’s taken over from Sandi Toksvig.

Crucially, there was also a tent with 12 practice kitchens in which the bakers could perfect recipes during their downtime. Filming was two days on, two days off. ‘Everyone was doing yoga,’ reveals Paul. 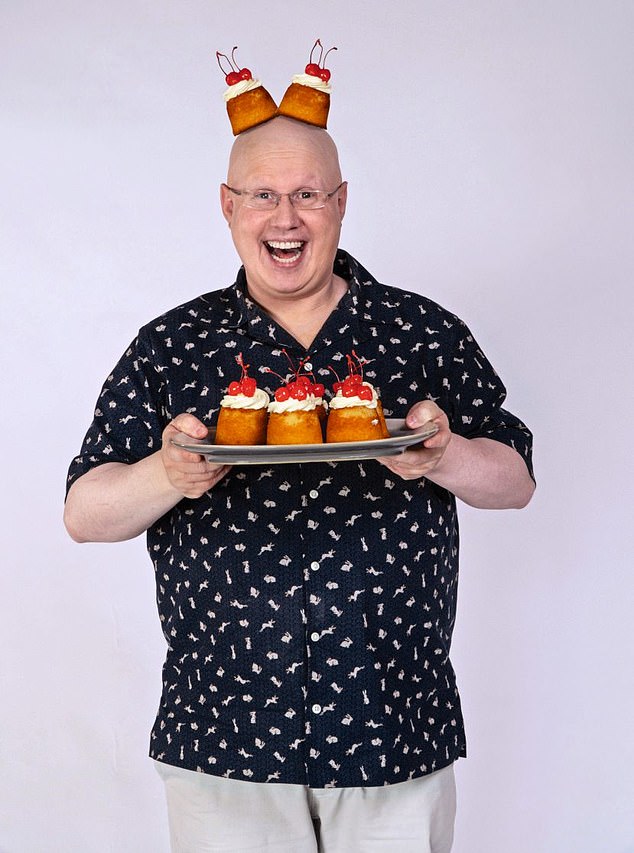 Matt Lucas, 46, (pictured) who has taken over from Sandi Toksvig as host, joined around 130 others in an isolating bubble during production

Matt can make anything funny

Despite the attempts to make the show appear as normal as possible, there’ll be one major difference on screen – the arrival of comedian Matt Lucas as co-host after Sandi Toksvig left to focus on other work.

Although she’s tiny, her shoes were huge ones to fill. Matt, by all accounts, did so admirably. ‘I’ve always been a massive fan of Matt and when he was chosen I was over the moon,’ says Paul.

‘He just fell into the role as host. He and Noel had me in stitches. They go totally off piste and we all crack up. People will love him. The only problem is he supports Arsenal! We watched the match together when they beat Liverpool, so I wasn’t very happy.’

Prue was more trepidatious. ‘I loved Matt but I didn’t really think I would,’ she admits. ‘I was a fan of Little Britain, but I didn’t know anything else he’d done.

‘But he’s zany enough to work with Noel – who’s off his rocker most of the time. What I hadn’t realised was how sweet-natured Matt is.

‘He’s a really lovely guy. And he has that ability to say things that, if other people said them, would be so unfunny. But, from his mouth and with his accents, they’re hilarious.

‘He can make anything funny. One second he’d be like a Hollywood gangster, the next he’d be a barrow boy.’

‘Then he’d start singing,’ laughs Paul. ‘He’s a good singer. He’s been in Les Misérables. And the bakers really liked him. He was brilliant with them.’

‘There was a tennis court, Pilates and keep-fit classes. We played rounders once a week and there were football matches. We were going from place to place on the estate in golf buggies. It was like some weird cult.’

Paul even took his own ping-pong table and pizza oven. ‘We had two pizza evenings where I made pizzas for everybody. One night we served 200!’

‘The bakers were allowed to bring their families,’ adds Prue.

‘It was lovely having children around. It was such fun to see the kids play rounders. I’m very good at watching with a glass in my hand! I had my two spaniels and went walking with them every day for an hour.

‘I feel great. I usually have all those old lady aches. Now I don’t have any.’

It must have been the safest place in England – Prue Leith

Despite the behind-the-scenes changes, the show will look the same as ever on screen. ‘The viewer will see Bake Off exactly as it’s always been,’ says Prue.

‘Because we didn’t have to be socially distanced in the tent.’

‘There was a story that Bake Off was cancelled,’ Paul laughs. ‘We actually read that on the set!’ So reports of the death of the Hollywood Handshake were greatly exaggerated? ‘If someone deserved a handshake, I’d have given one for sure,’ he says. And did he give many? ‘Wait and see!’ he teases.

So what of the contestants? This year’s bunch range in age from 19 to 61 and include a music teacher, an accountant and a panto producer. They’re all hoping to emulate 2019 champion David Atherton and win the coveted cake stand. 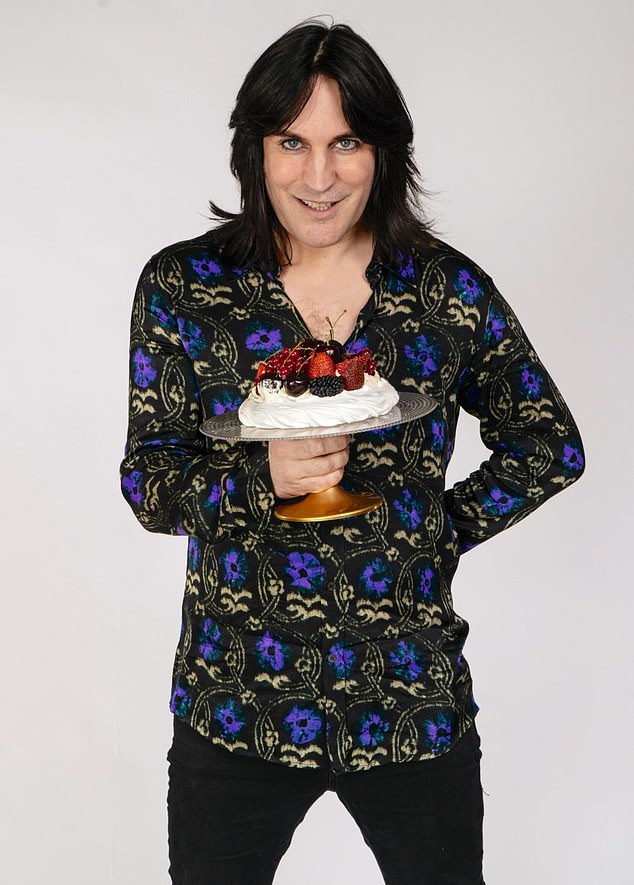 Paul said it got very emotional when someone left because the team became very tight, while living together. Pictured: Host Noel Fielding, 47,

‘And the originality!’ adds Prue. ‘They’d take a traditional method from one cuisine and combine it with flavours and ingredients from another.

‘There’s one savoury bake – I can’t tell you what, but I stole the recipe. I’ve made it twice since.’

The bakers start with Cake Week, and the first task is a Battenberg. There are two new themed episodes – Japanese Week and 1980s Week. Nothing disastrous went in the bin then? ‘Oh no, there’s no Baked Alaska-gate,’ laughs Paul.

‘Even with ice-cream and the heat. It was the hottest tent we’ve ever had.’ What about human meltdowns? ‘They were emotional,’ says Paul.

Baking went off the scale during lockdown

‘The gap between each round was shorter, so they probably felt the pressure. Normally they go home for a week, practise, and come back refreshed. But we didn’t have that luxury.

‘On the upside though, they got very tight as a team because they were living together. It got very emotional when someone left.’

You might think fewer days to practise would lead to a drop in standards, but Prue says not.

‘When you’re at home with children and have to go to work the next day, it’s harder to practise. Although you have five days, you’ve only got a couple of hours in the evening. Whereas this time they were just focused on baking.’

And they haven’t been the only ones. Forced to radically change our lives thanks to the coronavirus, one of the nation’s coping mechanisms has been to bake. There’s been a surge in demand for baking goods in recent months. 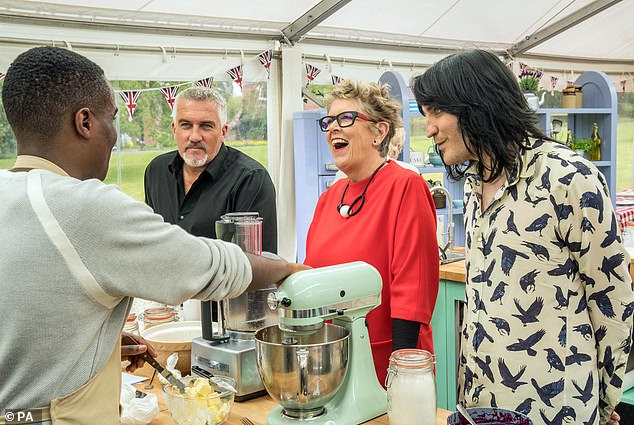 Paul said baking was off the scale during lockdown, therefore ‘this year, more than any other, we need Bake Off’. Pictured: Noel Fielding, Paul Hollywood and Prue Leith with previous contestant Liam

Sugar sales alone were up 46 per cent, while supermarket shelves were stripped of flour and every other kitchen smelled of banana bread.

‘This year, more than any other, we need Bake Off,’ say Paul. ‘If you look at what happened during lockdown, the baking going on was off the scale.

‘The whole country got the bug. Bake Off was all over Channel 4 and their media players. People were watching series after series on Netflix.

‘It became my escapism too, and I was getting the same feedback from the public. It did help people’s psyches. They could learn a new skill. I reckon the applications for Bake Off after this are going to go through the roof.’

Lockdown was tough for all of us, but the judges say it left them counting their blessings. ‘I so enjoyed being at home,’ says Prue.

‘It’s awful to say, but I did. I wondered why I’m always rushing around and working so hard. I tried to make a resolution that I’ll do less.

‘It was the first year for ages I’ve been here in early spring for long enough to see the garden changing,’ she says.

‘I know I’m so lucky when other people are having such a horrible time in a flat with children underfoot, trying to home-school and all the rest. But one of the things I did really enjoy during lockdown was baking and cooking for the local care home every Friday. 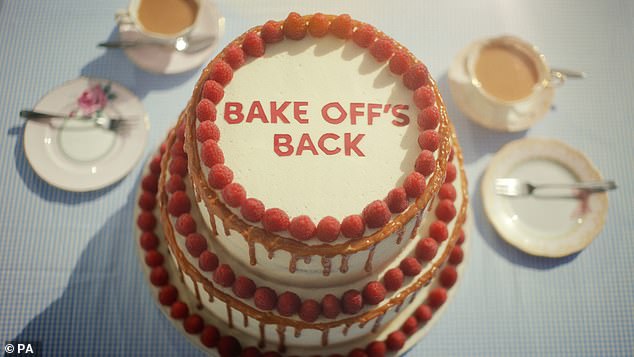 Paul said he found lockdown quite restful, revealing he completed jobs around his home and made banana bread twice a week

‘I was doing what I really love to do, which is catering. I’m not really a fancy chef, I’m a very good caterer. I like cooking for numbers and I like old-fashioned food and that’s what the care workers wanted.

‘One day I cooked a whole ham in the traditional way with sugar and cloves on top – it looked absolutely amazing – and gave it to them with potato salad. Or I’d make vegetable lasagne or spag bol. It sort of salved my conscience about having such a privileged life.

‘The only thing I didn’t like was that I couldn’t see the rest of my family, just my husband John. I did miss them.

‘I remember the day restrictions were loosened. I had such a marvellous day. I saw my son, his wife and their three children for the first time in Wiltshire. We went for lunch and it was fantastic.

‘In the afternoon my daughter, her husband and little boy arrived. I was in such an emotional state by the end… it was wonderful.’

Paul, too, enjoyed being forced to slow down. ‘I found it quite restful,’ he admits. ‘I’ve been here a year, but my house turned into a home during lockdown. I really fell in love with it.

‘I’ve done a lot of jobs around the house and my lawn’s fantastic. And to have that time to bake without rushing around was brilliant. I made banana bread twice a week.

‘I started giving it out to people in the village. They were saying, ‘I’ve heard your banana bread is good…’ I thought, ‘Right, I need to get more bananas…’

The Great British Bake Off returns later this month to Channel 4.