A venomous Asian hornet has been spotted in Hampshire just weeks after experts predicted a plague of the pests were on their way to the UK.

The hornet, also referred to as yellow-legged owing to legs that transition from brown to yellow at the ends, are capable of destroying the country’s bee population.

Spotted in Gosport, near Portsmouth, it’s the first official sighting of the killer hornet for almost a year. 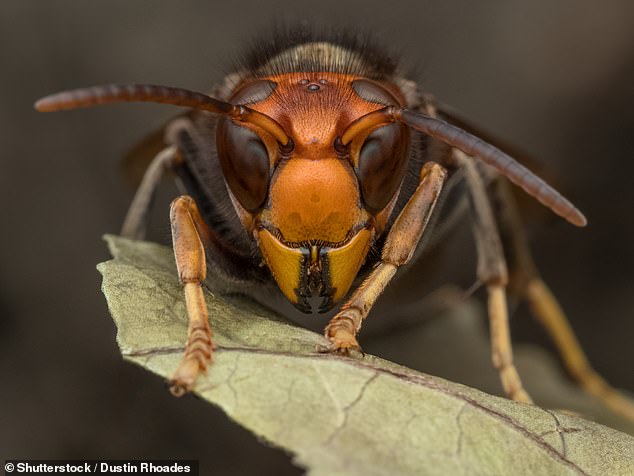 The deadly Asian hornet can pose an enormous threat to our honey-bees, already badly affected by habitat loss, parasites and pesticides

The foreign invaders are particularly ruthless killers of honey-bees. They can consume up to 50 a day.

Lying in wait for the bees as they return to their hives, the hornets first decapitate them and rip off their wings, making it easier to carry the bees back to their own nests as protein-rich morsels for their young.

And the vicious pests don’t spare humans either as they can kill people allergic to their venom.

Government officials today urged members of the public and beekeepers to be on their guard.

Plant and bee health officer Nicola Spence said: ‘By ensuring we are alerted to possible sightings as early as possible, we can take swift and effective action to stamp out the threat posed by Asian hornets.

‘That’s why we are working at speed to locate and investigate any nests in the area following this confirmed sighting.’ 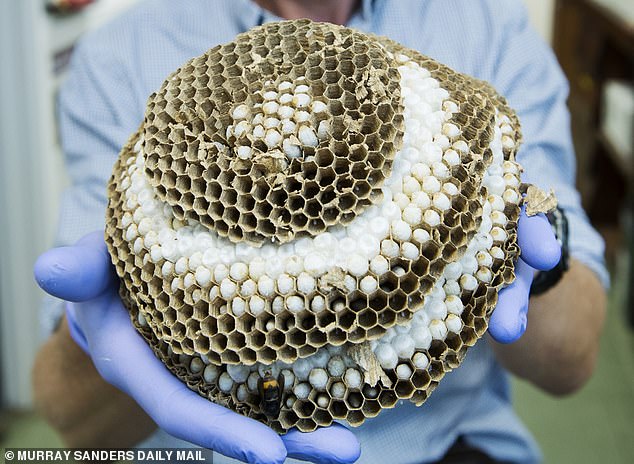 Pictured, an example of the hornet’s nest. Experts say now is the time to spot the hornets so that their nests can be destroyed before they multiply

All sightings have to be officially recognised by the National Bee Unit and monitoring is currently under way.

The last sighting of the pests was near Christchurch in Dorset, in October 2019, when two nests were found and destroyed

Today Ms Spence urged Brits to ‘please continue to look out for any Asian hornets’. 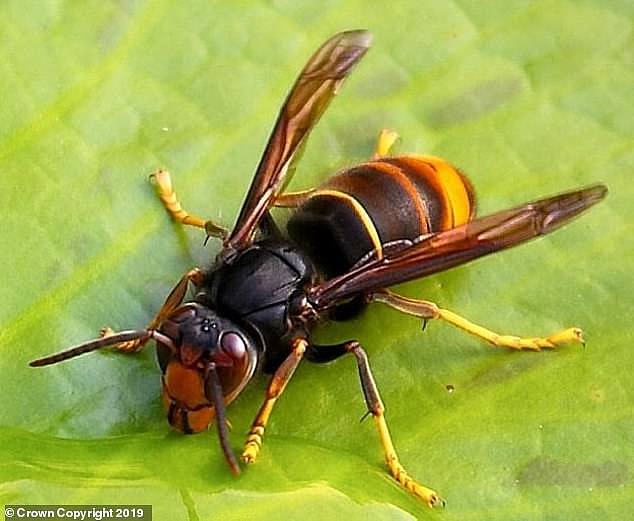 ‘If you think you’ve spotted one, report your sighting through the Asian hornet app or online,’ she said.

The public is being urged not to approach or disturb a nest because the Asian hornet can become very aggressive.

Just last month the Somerset Beekeepers Association said they were on red alert for sightings.

Lynne Ingram, coordinator of Somerset’s Asian hornet action team, said: ‘Now is the time to spot the hornets so that their nests can be destroyed before they multiply.’

Experts blame the recent wet weather for creating a ‘perfect breeding ground’ for the deadly insects and raised fears they could arrive in record numbers on British shores.

Should the hornets become established in the UK they will pose an enormous threat to our honey-bees, already badly affected by habitat loss, parasites and pesticides. 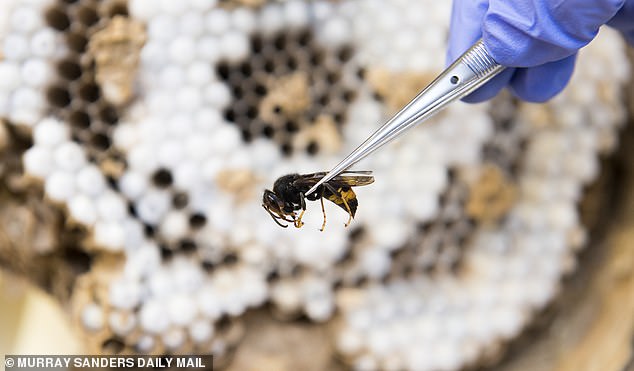 Asian hornets (pictured) are foreign invaders and ruthless killers of other flying insects, particularly honey-bees, and can consume up to 50 a day

Asian hornets first hitched a ride to the West in flower-pots exported from China to France in 2004.

They have since spread rapidly across Europe, arriving in Jersey in 2016 when winds carried fertilised queens over from France. Since then there have also been 17 sightings on the British mainland.

Lynne added: ‘The arrival of the hornet in Britain is especially bad news for bees – a favourite food source – and a single hornet can completely devastate a beehive.’