A wildfire that was reported to have ignited in the Big Creek drainage in Sierra National Forest Friday evening has exploded to nearly 36,000 acres and trapped at least 150 people near a Fresno County reservoir.

The Creek Fire — burning near Shaver Lake, Huntington Lake, and Big Creek — is 0% contained and tearing through the rugged, forested foothills of eastern Fresno County, threatening 3,000 structures and causing a harried evacuation of thousands of residents and weekend visitors.

About 150 people were trapped near Mammoth Pool Reservoir, according to the Madera County Sheriff, and ten were injured. Earlier in the day, a spokesman from the Forest Service had said that as many as 1,000 people were sheltering there and that people had been told to jump in the water, if necessary. As of Saturday evening, the California Office of Emergency Services was coordinating air and ground crew rescue, per the Sheriff’s Office.

“Reunification point will be announced when it is established,” the Sheriff’s Office said in a tweet. “Please avoid area.” 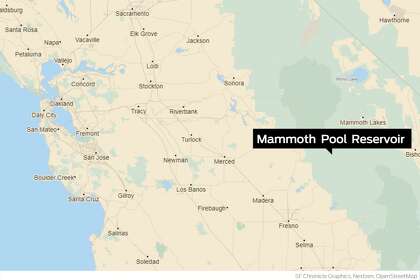 As temperatures soar in a record-breaking heat wave, the wildfire’s spread has proven explosive, defying efforts to contain it.

In photos posted on Twitter by Fresno’s Fox 26 News, large recreational vehicles and trucks congregated in a dirt field as the fire burned around them, torching pines and sending puffs and gray-brown smoke into the air. Embers streaked through the air like comets.

Daniel Swain, a climate scientist at UCLA, said in a tweet that a “massive pyrocumulus cloud [is] indicative of extreme fire behavior, & pyrotornado may have occurred” on the Creek Fire.

The Rock Creek and Fish Creek campgrounds have been evacuated, along with the Kinsman Flat and Arnold Meadows subdivisions, Cascadel Woods, Mammoth Pool, Whiskey Falls, Clover Meadow and Minarets.

About 25 engines, five handcrews, three bulldozers, three air tankers and two helicopters have been assigned to the Creek Fire, which is being jointly managed by Cal Fire and the U.S. Forest Service.

The Creek Fire is one of several new wildfires that were burning in California as of Saturday evening, along with the 1,500-acre Valley Fire in San Diego County and the 3,000-acre El Dorado Fire in San Bernardino County.

The cause of the Creek Fire remains under investigation.