At least four teachers in three states have died after bouts with the coronavirus since the dawn of the new school year, including a 28-year-old third-grade teacher in South Carolina.

It has left a teachers’ union leader worried that the return to in-person classes will have a deadly impact across the U.S. if proper precautions aren’t taken.

In some districts, the return to classrooms has already seen schools forced to switch back to online learning and send students and staff into quarantine after potential exposure to the virus.

In Brooklyn, two staffers tested positive for coronavirus Tuesday just a day after teachers and staff returned to the building.

South Carolina third-grade teacher Demetria ‘Demi’ Bannister, 28, died Monday just three days after she was diagnosed with coronavirus. At least four teachers have died from the virus since the start of the school year in three states as concerns grow among union leaders 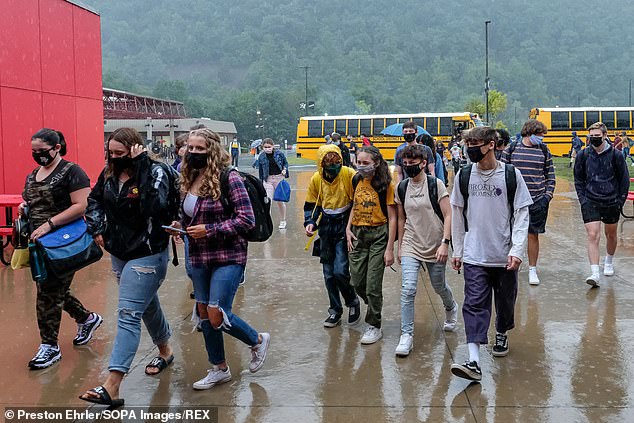 Students wearing face masks as a preventive measure arrive at Delaware Valley High School during the first day of school on September 2. A teachers’ union leader worried that the return to in-person classes will have a deadly impact across the U.S. if proper precautions aren’t taken

Among the teacher casualties since the start of the academic year was elementary school teacher Demetria ‘Demi’ Bannister, who died Monday just three days after she was diagnosed with the virus.

The district said Bannister was at Windsor Elementary School in Colombia on August 28 for a teacher work day, before classes resumed, but that was her last day in the school.

She began teaching remotely three days later and had not been showing symptoms when she was in the school building.

Bannister taught at the school for five years and is remembered by her colleagues as a ‘songbird’ who hosted a student club for aspiring singers.

‘Known as Windsor’s Songbird, Ms. Bannister used her musical talents to bring a great deal of joy to our school,’ said Denise Quickel, principal of Windsor Elementary, according to CNN.

‘For our school’s Attendance Matters kickoff in 2019 she wrote a song about the importance of coming to school to the tune of ‘Old Town Road’. The song and video were a big hit with our school family.

The school district was notified of her positive test on Friday and announced that it followed procedures for disinfecting, contact tracing and notification of close contacts.

Bannister’s family chose to share information on her death to remind others of the coronavirus risks.

‘While gone from us too soon, Ms. Bannister’s legacy lives on through the lives of the students she taught in her five years as a dedicated educator,’ said Richland Two Superintendent Dr. Baron Davis in a statement.

‘To honor Ms. Bannister’s memory I ask the Richland Two family to join me in reaffirming our commitment to doing all we can to provide premier learning experiences for all students in the safest environment possible and doing our part to slow the spread of COVID-19.’

It’s unclear how many teachers in the U.S. have become ill with COVID-19 since the new school year began, but Mississippi alone has reported 604 cases among school teachers and staff. 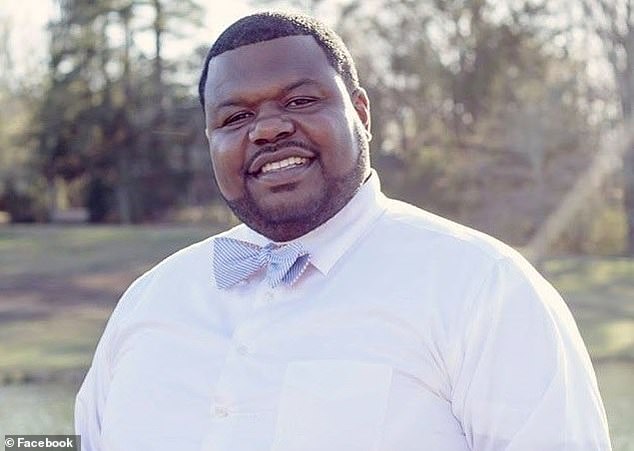 Nacoma James, 42,  taught at a middle school and helped coach high school football. He died August 6 during the first week of classes from coronavirus complications 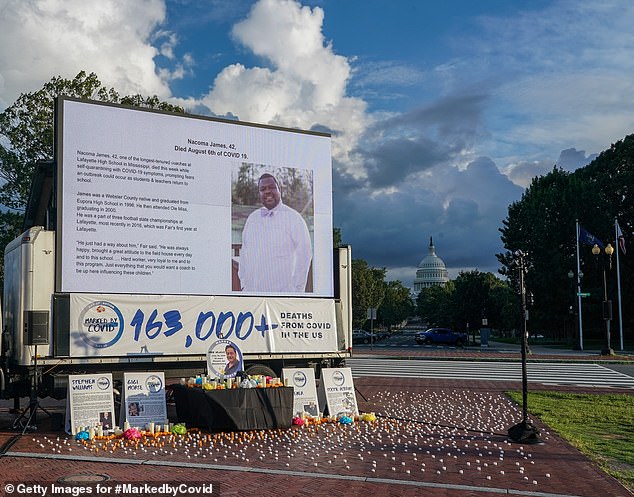 A tribute to teacher Nacoma James outside of his school in Oxford, Mississippi 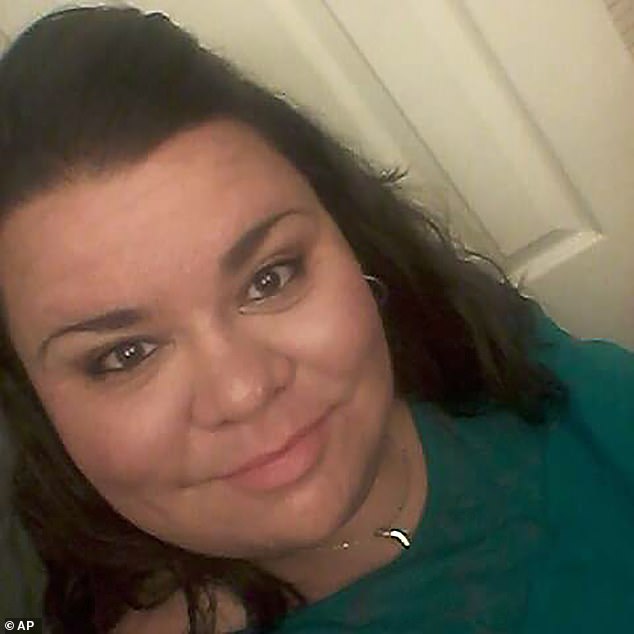 AshLee DeMarinis was just 34 when she died Sunday after three weeks in the hospital. She taught social skills and special education at John Evans Middle School in Potosi, Missouri

Johnny Dunlap, a 39-year-old drama and forensics teacher at Dodge City High School in Kansas, said he considered quitting before the district made masks mandatory for teachers and students.

Still, his history of bladder cancer and high blood pressure have left him with some angst about being around so many people.

Existing health conditions can put people at higher risk for severe illness and death from the virus.

‘I’m at a high school with close to 2,000 students so it kind of runs against the advice we have been given for half a year now,’ Dunlap said.

The early phase of the pandemic claimed the lives of dozens of teachers.

The New York City Department of Education alone lost 31 teachers among 75 employees whose deaths were blamed on the coronavirus.

Across the U.S., the American Federation of Teachers lists 210 union members who have died. The list includes support staff and retirees as well as teachers.

The start of the new school year brought with it new fatalities, two in Mississippi alone. 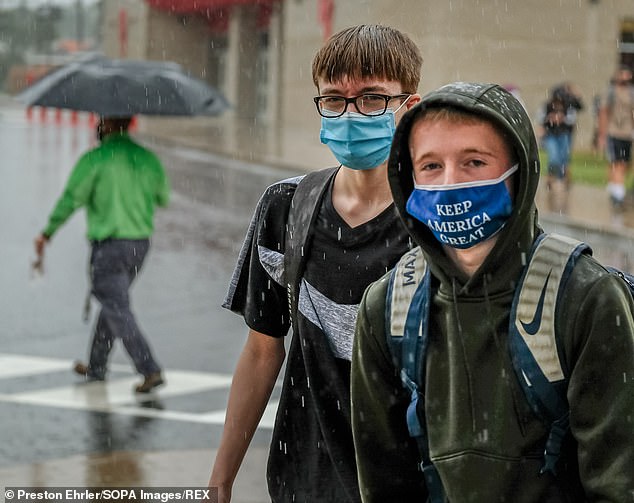 Students wearing face masks as a preventive measure arrive at Delaware Valley High School during the first day of school on September 2. Schools have begun to reopen with precautions 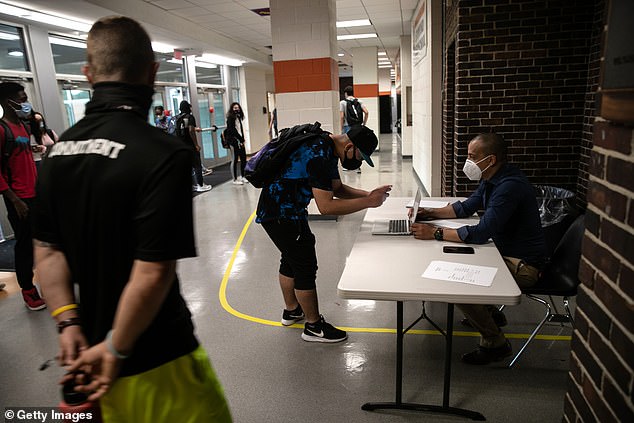 A student photographs his class schedule on the first day of school at Stamford High School on September 8. The school has a hybrid model, which includes in-class learning every other day 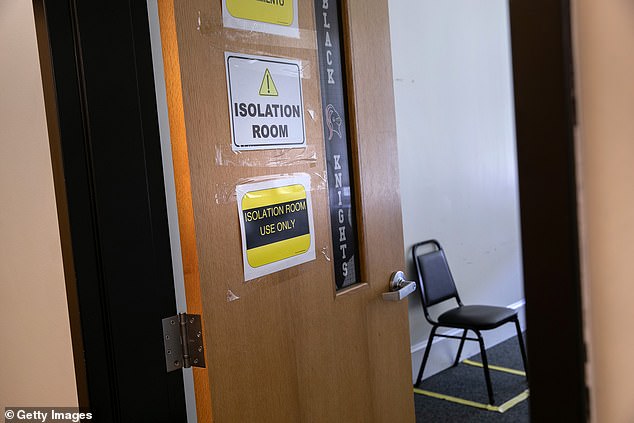 He died August 6 during the first week of classes, but was self-quarantining when teachers and students returned to the classroom, said Lafayette County School District Superintendent Adam Pugh.

Pugh recalled that James was a seventh-grade student when he began teaching 30 years ago.

‘It was a hard punch to my stomach, when I heard,’ Pugh said.

James worked with football players during summer workouts, but an investigation found no new cases linked to him, Pugh said.

Another Mississippi teacher died Sunday. History teacher Tom Slade recently posted on Facebook about his battle with pneumonia caused by the coronavirus.

Slade was teaching in-person when the academic year started on August 6, Principal Raina Holmes said, but began quarantining after he had contact with someone who was positive at a church meeting.

His last day of teaching was August 21.

Slade was known for jokingly using a judge’s gavel to quiet noisy students.

‘He always brought humor into his classroom and his students loved that part about him,’ said Holmes.

AshLee DeMarinis was just 34 when she died Sunday after three weeks in the hospital. 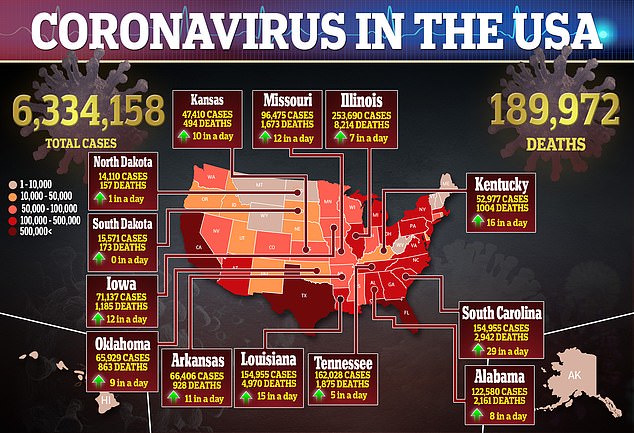 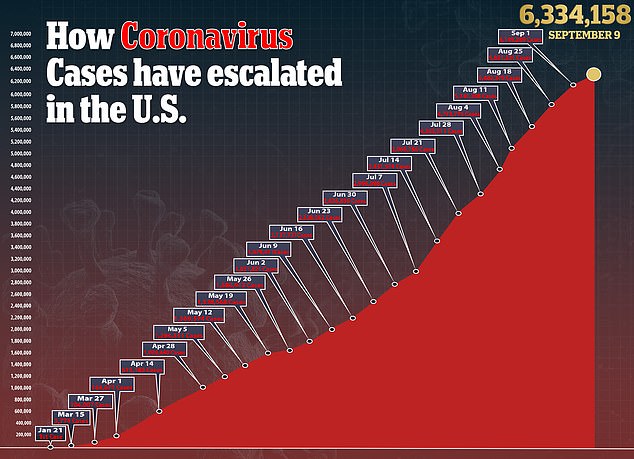 DeMarinis was already hospitalized by then but had been in the school preparing for the year a couple of weeks earlier, her sister, Jennifer Heissenbuttel said.

Superintendent Alex McCaul said contact tracing determined she had no close contact with any teachers, students or staff.

DeMarinis grew up near New York but developed a passion for her rural school and Potosi, a town of 2,600 residents, Heissenbuttel said.

‘She had the patience of a saint. She was really meant for it,’ Heissenbuttel said. ‘The kids loved her. She touched so many lives.’

DeMarinis had asthma, which can put someone more at risk from severe illness from COVID-19.

She began feeling poorly around mid-August, Heissenbuttel said. After developing fever and shortness of breath, she was tested for the coronavirus and was soon hospitalized.

It’s unclear where DeMarinis picked up the virus.

Heissenbuttel is a nurse who works in a New York area hospital’s intensive care unit. Somehow, she managed to avoid the illness that her sister couldn’t.

‘I thought it would be me, not her,’ Heissenbuttel said.

School districts and state officials have struggled to find the right balance with coronavirus precautions with some schools already being forced to return to online learning within the first week of returning to classrooms.

According to the Washington Post, a school in Georgia had to send hundreds home to quarantine after just one day on a prep school campus.

In another district, 900 children and staff had to quarantine after being exposed to coronavirus in the first week.

In Oklahoma, at least eight students and staff members have tested positive and dozens have been forced to quarantine after the death of a staff member.

Special education teacher Teresa Horn, 62, died of a heart attack a few days after being diagnosed.

The results came just a day after teachers and other staff returned to the school building ahead of the September 21 start date. 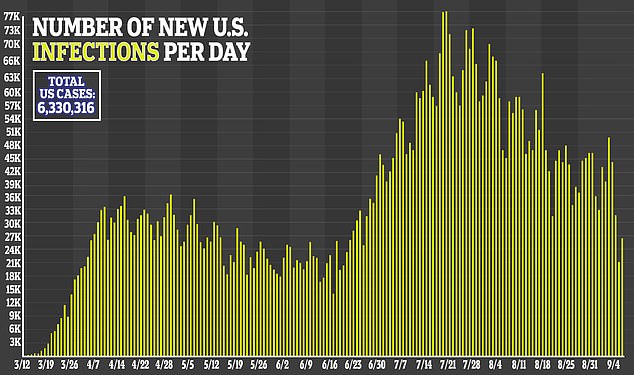 A third possible positive case was identified, according to ABC 7 NY.

‘Until we have a vaccine in place, the most effective tactics against the spread of the coronavirus have been masks and social distancing, along with testing and contract tracing,’ said the United Federation of Teachers union.

‘All of these are part of the city’s safety plan. The plan anticipates that testing will sometimes show that asymptomatic individuals in schools have contracted the virus.

‘The isolation and quarantine of such individuals, followed by aggressive contact tracing, are also key elements of the safety plan.’

New York Daily News reports that the positive cases were confirmed in Public School 1 in Sunset Park and Middle School 88 in Park Slope.

The buildings were not shut down entirely but staffers were given the option to work from home.

‘Our protocol is to immediately notify staff and Test and Trace will begin an investigation to determine any close contacts,’ said Education Department spokeswoman Miranda Barbot.

‘We’ll require any staff identified as close contacts to quarantine, and remain vigilant to prevent spread.’

They are the first reported cases of coronavirus in city schools since buildings reopened.

There are now close to 190,000 deaths from coronavirus in the United States, where there have been more than 6.3million cases.