The 1985 time-travel comedy Back To The Future spawned one of the most beloved trilogies in cinema history, yet the director of all three films, Robert Zemeckis, is steadfast in refusing to do a fourth.

Fans have begged, executives have wheedled, but Bob, as he’s known to friends, is sure: the director of Back To The Future won’t revisit the past.

A musical version on stage, though, is a whole different idea. About 15 years ago, Bob and wife Leslie were watching The Producers, Mel Brooks’s adaptation of his own 1967 film, on Broadway.

Leslie suggested the same might be done for Back To The Future. ‘It seemed like a great idea,’ Bob says. ‘The story was pretty operatic and there was so much great music in the movie. So I went to Bob Gale, and he took the idea and ran with it.’ 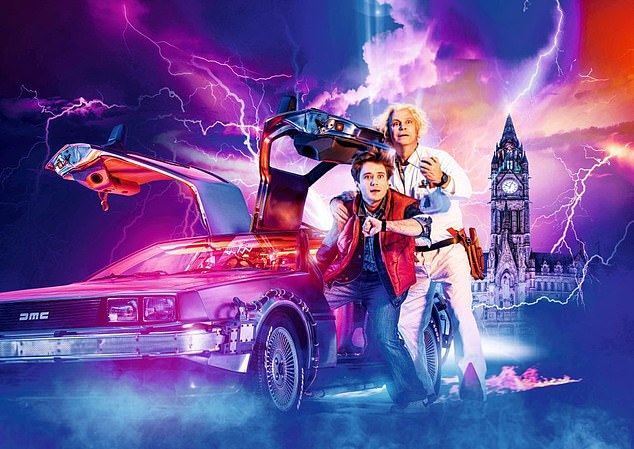 Robert Zemeckis, director of the three Back To The Future films, has turned the show into a musical, pictured: Marty McFly and Doc Brown in the musical

Bob Gale is his long-time collaborator, with whom he wrote Back To The Future. In fact, that was Gale’s idea.

He was looking at his father’s high school yearbook and wondered whether he would’ve liked him if they were at school together. Both Bobs felt sure there was a movie there.

That one flight of whimsy – young Marty McFly travelling back 30 years and encountering his parents as teenagers – gave birth to three hit movies. And now it’s a musical, which has its world premiere at the Manchester Opera House on Thursday.

The original film had spectacular special effects, and the musical will, too. ‘I’m a giant fan of stage illusion,’ says Bob. ‘It’s a whole different art form and I’ve given them a few wild ideas.’

The musical will have its world premiere at the Manchester Opera House on Thursday, Bob revealed the action scenes have been turned into choreographed dance numbers

The whole show is a period piece.’ Nonetheless, some scenes in the film may not chime with modern-day sensibilities, such as when the school bully Biff effectively attempts sexual assault.

‘The action scenes, for instance, are more like choreographed dance numbers. It’ll be wonderful.’

As he speaks, we can hear a dance number going on next door. As one of the show’s producers, Bob has come to a rehearsal room in London to watch the cast before they all head north.

Has he, a son of Chicago who now lives in California, ever been to Manchester? ‘No, I’m looking forward to it. I need to find a good place to get fish and chips. I only know of Manchester from the soccer, but I don’t know much about that.’ 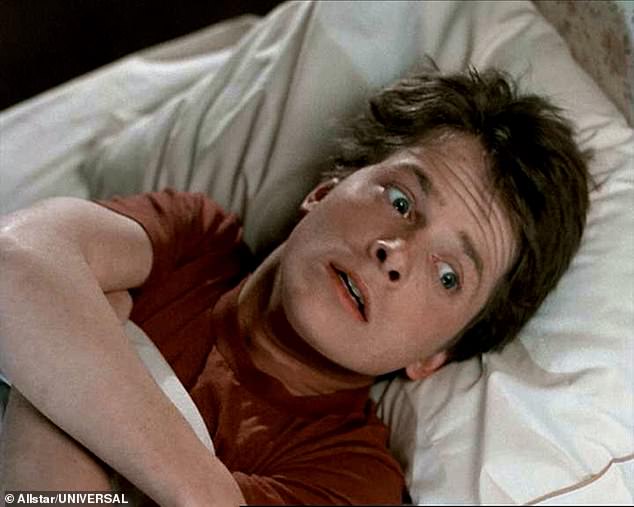 But he does know about movies, and at 67 he’s as in demand as ever. After all, there aren’t many directors with a list of credits to compare with his, including the huge 1994 hit Forrest Gump, which won six Academy Awards, Who Framed Roger Rabbit?, Cast Away and The Polar Express.

His adaptation of Roald Dahl’s The Witches, with Anne Hathaway, is due out this year and then he will direct a live-action Pinocchio.

Long before all this, though, he was a teenage cinema nerd. He went to the University of Southern California’s School of Cinematic Arts (where he met Bob Gale), and recalls up-and-coming director Steven Spielberg coming to talk about his new movie The Sugarland Express.

‘I showed him my student film, which he really liked, and we stayed in touch.’

Spielberg went on to executive produce all the Back To The Future films, and Bob still considers him a mentor.

Yet despite his support, every Hollywood studio refused Back To The Future, most thinking the idea was too childish. But the unexpected success of Bob’s 1984 film Romancing The Stone cleared the way for it to be made. 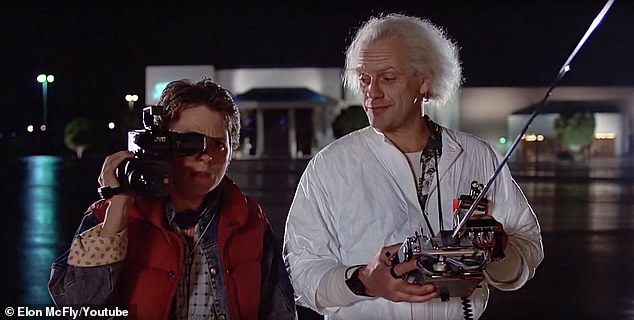 Doc (Christopher Lloyd) and Marty send a new model of time travelling car into the future in the classic film. It will now be brought to a new audience with a theatre adaptation

So what are his memories of the shoot? ‘Michael J Fox [Marty] was making the sitcom Family Ties by day, so we had to shoot at night. So my most vivid memory is never seeing daylight!

‘But Michael and Christopher Lloyd [as the nutty scientist, Dr Emmett Brown, who invents the time-travelling DeLorean car] are so great in it. Chris is my neighbour in Santa Barbara. He’s in his 80s now, but still in fabulous shape.’

The same, alas, can’t be said of Michael J Fox, long-since diagnosed with Parkinson’s disease. ‘He lives on the East Coast so I don’t see him often, but I was at Disneyland a couple of years ago with my kids and I ran into him.’

Has he ever suffered the opposite type of actor, the brattish movie star? Bob smiles. ‘Do you know, I’d tell you if I had,’ he says. ‘But I really haven’t.’

Back To The Future: The Musical opens at the Manchester Opera House on Thursday. Call the box office on 0844 871 3018.