Bay Area shrouded in smoke: When will it clear this week?

Bay Area residents woke to a soupy mess of fog and wildfire smoke Monday morning, and sooty conditions remain in the forecast through the first half week with a shift in the weather on Thursday and Friday bringing the best chance for cleaner air.

Today marks the 28th consecutive day the Bay Area Air Quality Management District has had a Spare the Air Alert in effect due to wildfire smoke. The region has now been impacted by sooty conditions for an entire month.

A low-pressure trough offshore of the Pacific Northwest is beginning to sag into Northern California and has pushed a deep 1,800-2,000 marine layer onshore. The wildfire smoke has mixed the fog with widespread “unhealthy” air quality across the region. At this level, active children and adults, and people with respiratory disease, such as asthma, should avoid prolonged outdoor exertion; everyone else, especially children, should limit prolonged outdoor exertion.

“The definition of smog is fog and smoke,” said Cindy Palmer a forecaster with the National Weather Service office in Monterey. “Here in Monterey, we clearly smell smoke outside. I had ash on my car. We are seeing visabilities across the region between one and two miles. From San Francisco to Livermore everywhere, we have smoke and fog. I hate calling it soup but that’s what it feels like.” 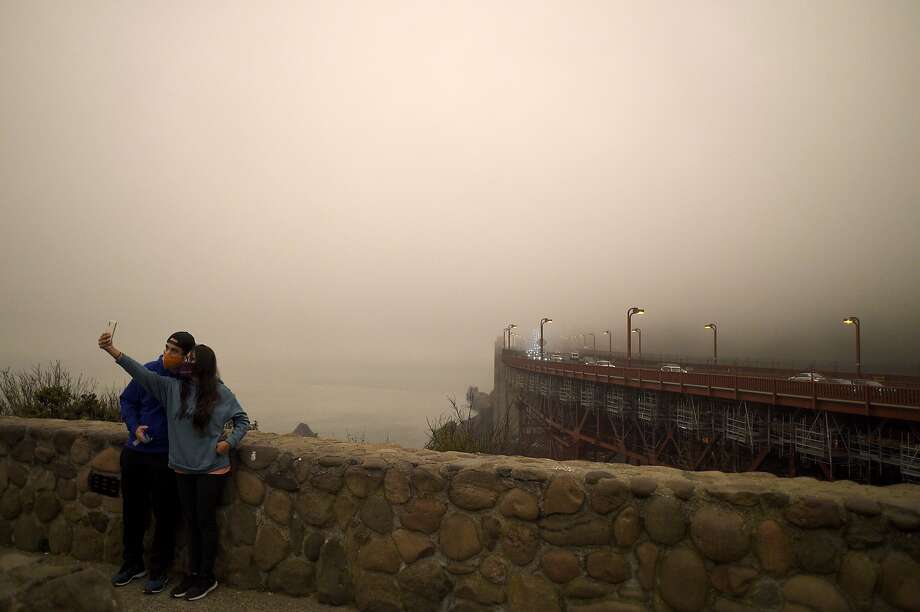 A view of a layer of smoke generated by the over 2 dozen wildfires burning in California created and eerie orange glow over mush of the San Francisco Bay Area, California, United States on September 09, 2020. Fortunately a marine layer kept the smoke well above the ground improving air quality in the area.

The marine layer will help kick up an ocean breeze along the coast this afternoon and in coming days. Typically, onshore flow would help clear smoke along the coast, but it’s uncertain whether it will make a difference with multiple wildfires around the West Coast generating smoke.

“There is quite a bit of smoke still off the coast,” said Palmer. “It’s hard to know whether what we’re seeing in the satellite is elevated or near the surface but we can see there’s smoke off the coast and the winds could push it inland. As much as I’d like to say we should see improving conditions, it may take longer even though we are looking at an onshore wind.”

Late Thursday into Friday, the low-pressure system hanging off the coast is expected to push inland, delivering a chance of rain to the Pacific Northwest and bringing cool temperatures and drizzle to Northern California.

As the trough exits the region to the east over the weekend, offshore winds could develop. These so-called Diablo winds are known for blowing hot, desiccating air across the landscape, increasing the risk for wildfires sparking.

Amy Graff is the news editor for SFGATE. Email her: [email protected]