Presenters Ant McPartlin and Declan Donnelly are set to kick-off this weekend’s Britain’s Got Talent semi-final with a high-octane musical number.

The beloved presenting duo hit the right notes as they entertain viewers with a rat pack-influenced intro, which is most definitely a step up from their PJ and Duncan days.

Singing and dancing their way through the show’s opening, Ant and Dec are dressed to impress in sleek suits while introducing the talent show’s return following the coronavirus lockdown.

Kicking things off with a bang, Dec, 44, first reflects: ‘It’s been a strange few months.’

Continuing on his train of thought Dec adds: ‘I’ve missed so much. I’ve missed the laughs, the magic , the mayhem’.

‘I’ve missed the singers, the acrobats,’ Ant chimes in. ‘The comedians, the dancers – the talent.’ 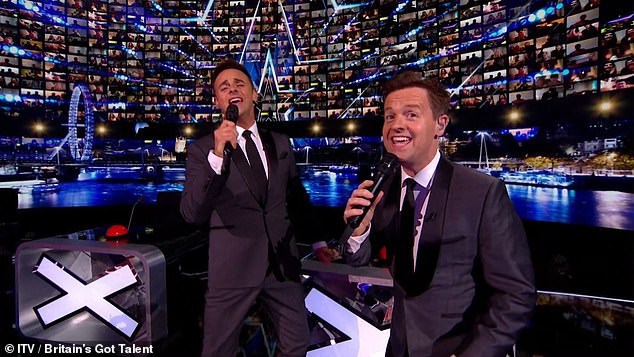 Hitting the right notes: Presenters Ant McPartlin and Declan Donnelly are set to kick-off this weekend’s Britain’s Got Talent semi-final with a high-octane musical number 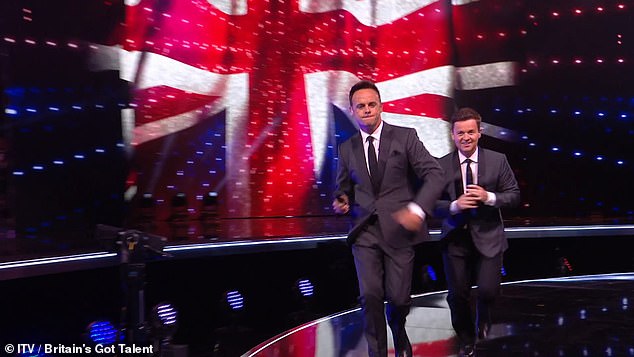 Music to our ears: The beloved presenting duo hit the right notes as they entertain viewers with a rat pack-influenced intro

Dec ponders: ‘What do you think? Is it time to bring it all back?’ to which Ant excitingly replies: ‘I thought you’d never ask, lets do it.’

Suddenly, the pair descend into song and are joined on stage with a host of dancers as they sing: ‘Let’s begin, strap in, hold tight’ while moving to the music.

Before introducing the BGT judges, the duo give viewers a glimpse of the virtual crowd tuning in on the huge ‘audience wall’ behind the judges’ individual panel tables. 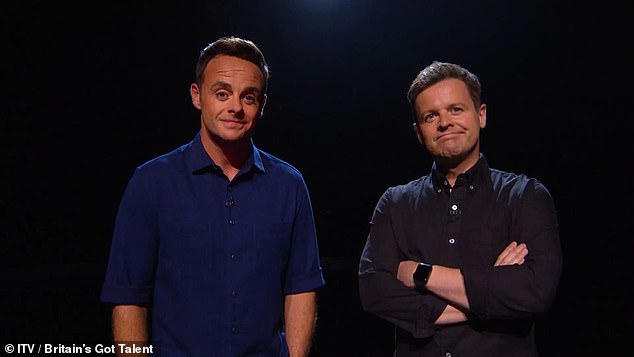 Kicking off: Kicking things off with a bang, Dec, 44, reflects: ‘It’s been a strange few months’

Ant and Dec than quite literally made a song and dance about welcoming the judges to the studio with Alesha Dixon first making an entrance in a striking strapless gown as they state ‘if you want a vixen than call Alesha Dixon’.

While comedian and actor David Walliams arrived on stage behind a wall of feathers to the boys singing: ‘Always understated must be our David’.

Next up commanding attention was Amanda Holden, who appeared on stage on top of a golden Union Jack in a jaw-dropping gold gown to the lyrics, ‘Silence may be golden but here’s Amanda Holden’. 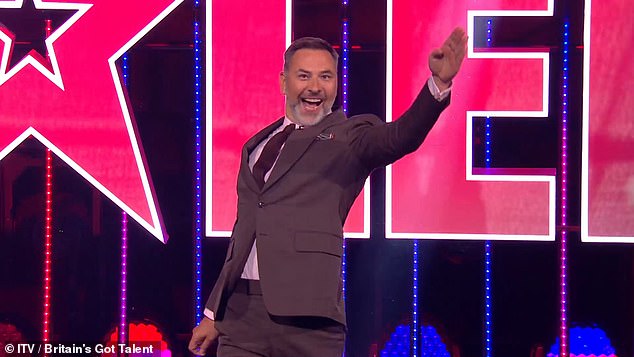 Arrival: David Walliams arrived on stage behind a wall of feathers to the boys singing: ‘Always understated must be our David’ 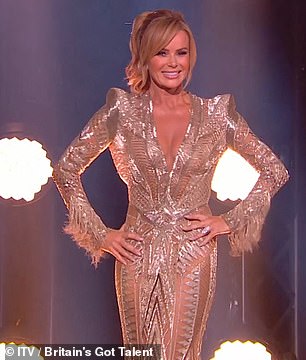 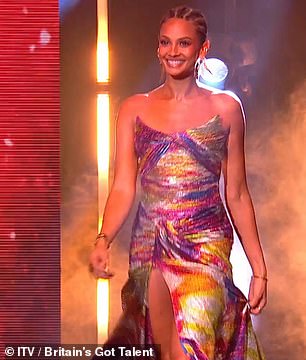 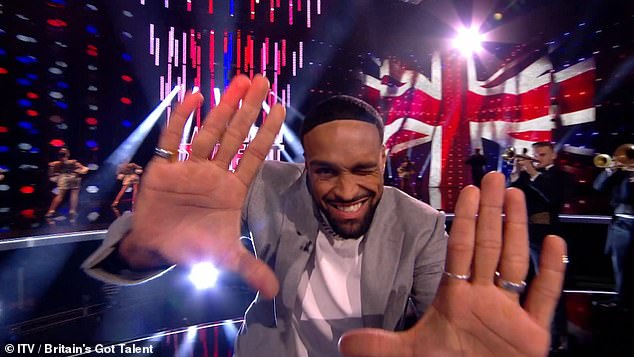 Smooth moves: BGT winner Ashley Banjo is filling in for head judge Simon Cowell, who is currently recovering from a freak bike accident in Los Angeles

Rounding off the judges for this year’s semi-finals is former BGT winner Ashley Banjo, who is filling in for head judge Simon Cowell following his freak bike accident in Los Angeles.

The first glimpse at Saturday’s opening musical number comes after the series gave fans a sneak peek of the show’s new socially-distanced judging panel ahead of the first semi-final this weekend.

The new setup sees each judge placed on their own desks at least two metres apart to ensure the show is adhering to new safety guidelines during the COVID-19 crisis. 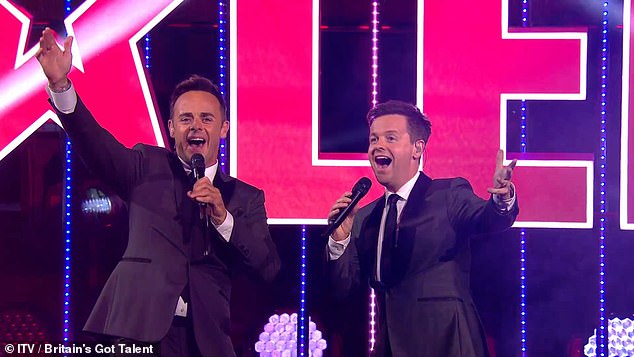 Having fun: The duo looked in their element as they performed their tune 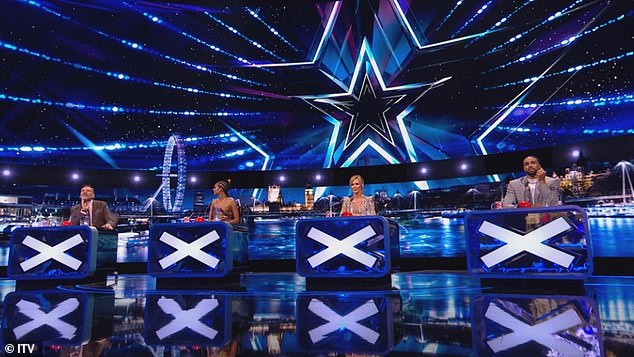 SPOILER: Britain’s Got Talent have revealed a glimpse of the show’s new socially-distanced judging panel ahead of the first semi-final this weekend

For the pre-recorded semis, Amanda, Alesha, David and new judge Ashley will be seated separately to adhere with strict new guidelines, with the shows also featuring a virtual audience watching from home.

Amanda has also been promoted to head judge, and joked she’d be backing ‘musical theatre all the way,’ if she had to make a deciding vote.

Simon, 60, was forced to pull out of BGT after breaking his back during a shock cycling accident, and has been replaced by Diversity star Ashley Banjo.

Following news of her promotion Amanda told MailOnline: ‘I will vote musical theatre all the way if I need to make a deciding vote!’

Sources also told The Sun that Amanda was the obvious choice for bosses to be head judge, given she’s appeared on the panel since the show’s inception in 2007. 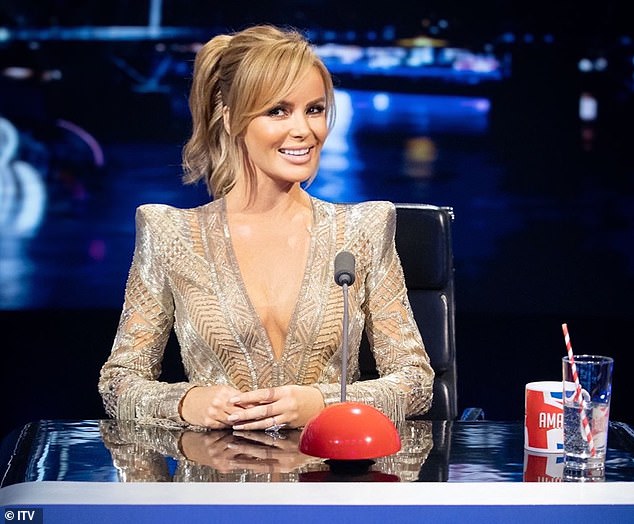 New job! Amanda has been promoted to head judge in place of Simon Cowell 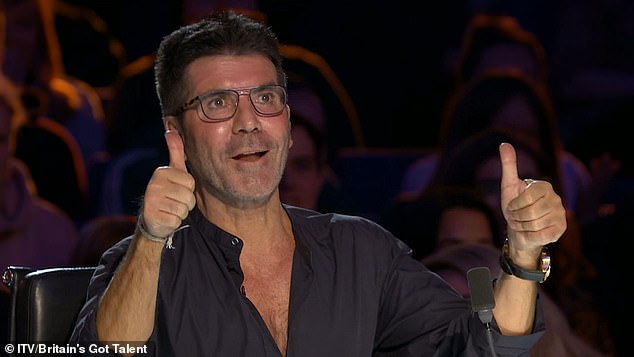 Exciting: The presenter has landed the position after Simon (pictured on the panel) was forced to pull out of the semi-finals following a bike accident which left him with a broken back

An insider said: ‘It makes total sense for Amanda to be head judge with a deciding vote in a deadlock situation.

‘She’s the only one, other than Simon, who has been there since Day One and has seen it all. She cannot wait for the responsibility boost and is certainly going to take it in her stride.’

Britain’s Got Talent returns on Saturday at 8pm on ITV. 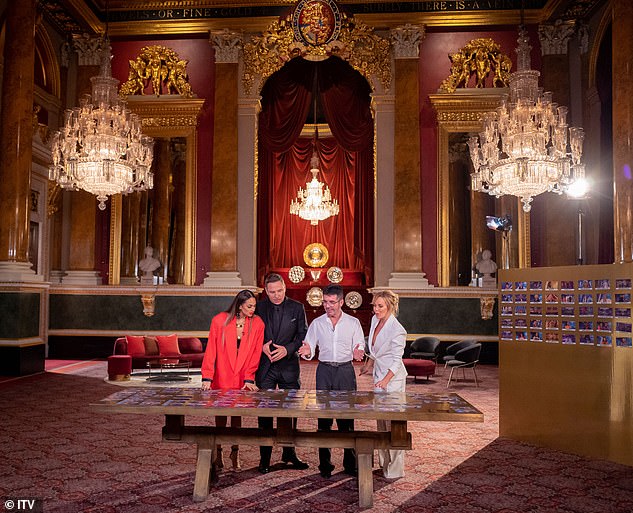 Plans: The BGT semi-finals, which had been due to be held in May, will now take place over five, nail-biting – and pre-recorded – episodes. The final will then take place live in October