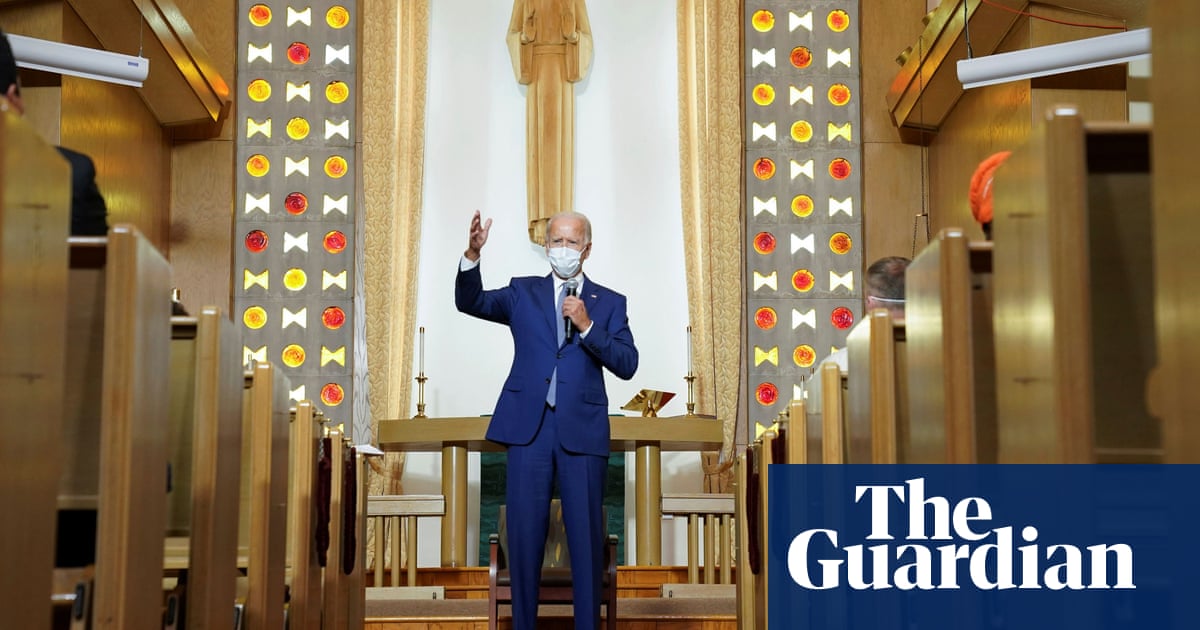 Democratic presidential nominee Joe Biden on Thursday warned that Donald Trump’s behavior “legitimizes the dark side of human nature”. He made the remarks during a visit to Wisconsin, where he spoke by phone to Jacob Blake, a Black man whose shooting by a white police officer renewed nationwide protests against systemic racism.

For nearly 90 minutes after landing in the state, Biden and his wife, Jill, met privately with Blake’s father, Jacob Blake Sr, his mother, Julia Jackson, his siblings, and some members of his legal team in a room at the Milwaukee airport.

Blake, who Biden said was released from the ICU, joined the conversation for nearly 15 minutes from the hospital. Blake’s family said he is paralyzed from the waist down after being struck seven times in the back by police as they tried to arrest him last month in Kenosha, Wisconsin.

“He talked about how nothing was going to defeat him – how whether he walked again or not, he was not going to give up,” Biden said of their conversation during a listening session with community leaders, and two members of law enforcement, at Grace Lutheran Church in Kenosha.

Blake’s shooting followed a summer of high-profile and often fatal encounters between police and Black Americans, and turned Kenosha epicenter of the national debate over police brutality and racial injustice.

Biden’s travel to Wisconsin, his first since becoming the party’s nominee, was designed to draw a stark contrast with the president, who visited Kenosha on Tuesday. Biden said he sought common ground while Trump stoked division. Recalling Trump’s comments after the white supremacist violence in Charlottesville, when he said there were “very fine people on both sides”, Biden claimed that the president was actively obstructing racial progress.

“No president has ever said anything like that,” Biden said. “The generic point I’m making is, it’s not all his fault. But it legitimizes the dark side of human nature.”

Ignoring the objections of local officials who feared his presence would inflame an already tense situation, Trump used the visit to amplify his tough-on-crime message and forcefully defend law enforcement, rejecting protesters’ urgent pleas for reform. He never once mentioned Blake’s name and instead focused on the street violence that has erupted alongside peaceful protests, which he blamed on Democratic leaders.

At a press conference on Thursday, the Wisconsin governor, Tony Evers, a Democrat who asked Trump not to come to Kenosha, said he would have preferred if both candidates stayed away.

Striking a somber tone, Biden sat quietly at the front of the church, listening to the speakers, who included a local Black Lives Matter activist, a fireman and a woman whose business had been looted.

In his remarks, Biden condemned acts of violence. “Regardless of how angry you are, if you loot or you burn you ought to be held accountable, period,” he said during his remarks at the church. “It just cannot be tolerated, across the board.”

But he also likened the present-day demonstrations to the civil rights movement of the 1960s, casting this moment as a national awakening that could turn the tide of centuries of injustice.

“We’re finally at a point we’re going to address the original sin in this country – slavery, and all its vestiges,” Biden told those in attendance, all of whom, like Biden, wore masks and sat apart. “I can’t tell you everything will be solved in four years. But I can tell you one thing, it’s gonna be a heck of a lot better.”

Before arriving in Kenosha, Biden and Blake’s family discussed racial injustices in policing, the reforms that are needed to address those issues, the candidate’s “plans for change” and the impact of his selection of California senator Kamala Harris, a Black woman, to be his running mate, according to a statement released by a family attorney, Ben Crump.

“The family was grateful for the meeting and was very impressed that the Bidens were so engaged and willing to really listen,” Crump said, adding: “It was very obvious that Vice-President Biden cared, as he extended to Jacob Jr a sense of humanity, treating him as a person worthy of consideration and prayer.”

After the church, the Bidens met with parents and educators in a backyard in nearby Wauwatosa, Wisconsin, to discuss the challenges of reopening schools amid the coronavirus pandemic.