A Black Lives Matter protester was arrested and bundled into a van on a seven-year-old warrant after calling police ‘pigs’ and saying he wanted to ‘take their heads off with a hand saw’.

Jeremy Logan says he was driven away in an unmarked van and kept in custody for more than a day while on his way to a protest in Spokane, Washington.

Logan, the chair of a local Democratic Socialists of America branch, told HuffPost that he was arrested on a 2013 drugs warrant which has only now been fulfilled.

Spokane County Sheriff Ozzie Knezovich hit back in a lengthy press conference where he insisted that Logan’s arrest was ‘not a political issue’.

However, the Republican sheriff admitted that officers had been monitoring Logan’s online rhetoric in the lead-up to his arrest. 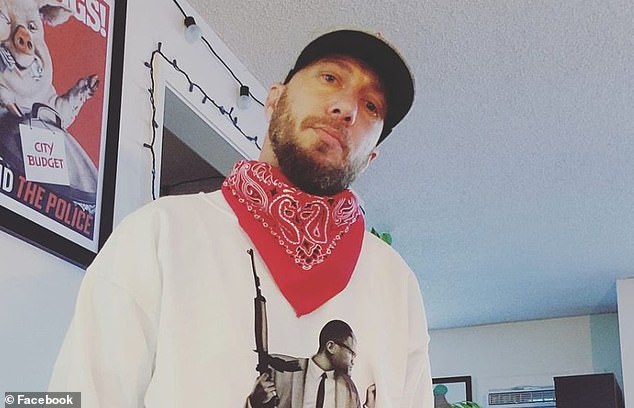 Jeremy Logan (pictured) says he was driven away in an unmarked van and kept in custody for more than a day while on his way to a protest in Spokane, Washington

Logan said he was arrested on August 30 after plain-clothes officers grabbed him and told him he was under arrest on a warrant.

He says that up to eight plain-clothed men handcuffed him and bundled him into an unmarked van before driving him to city police.

Logan was wearing a shirt with the slogan ACAB or ‘All Cops Are B***ards’, which he says was ‘not taken lightly’ by the arresting officers.

Two friends witnessed the arrest and told HuffPost that it was ‘scary’. Logan was released a day later when his father paid a $500 bond.

Logan said the 2013 warrant related to unpaid fines relating to a failure to appear in court on drugs charges.

Responding to the claims, Sheriff Knezovich gave a press conference in which berated HuffPost’s coverage and highlighted examples of Antifa violence.

He said that the arresting officers did have badges around their necks when they detained Logan, who he said had joined the recent CHAZ protests in Seattle.

Knezovich pointed out Logan’s Facebook posts, calling them ‘threatening, ‘violent’ and ‘ISIS-like’ after Logan spoke about ‘taking these pigs’ heads off with a saw’.

‘So why was he arrested? He was a convicted felon with a warrant and yes, he knew he had the warrant, and yes, he had been contacted before,’ the sheriff said. 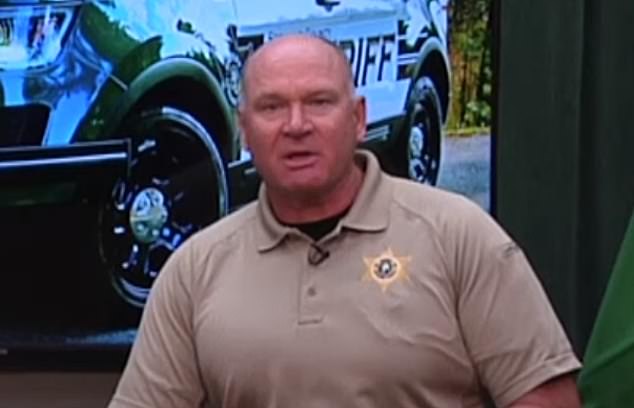 Knezovich continued: ‘But he [Logan] also upped the ante by making threats and his rhetoric was increasingly violent.

‘It’s a response to the fact that you had an individual that had a warrant and we identified he had a warrant. He was escalating in his rhetoric and we removed him from the street.’

‘Logan is not the victim here. He is a felon who had a warrant,’ the sheriff said, saying that officers had been looking for Logan since before the Facebook posts.

‘America is the victim of Antifa’s agenda and the media’s continued pushing of a false narrative that these people don’t exist,’ he said.

The sheriff also insisted that his office had taken action against right-wing extremists in the past as well as left-wing protesters.

Knezovich has also criticized Antifa on Twitter, saying the movement ‘isn’t about race, they don’t care about BLM, it’s about the overthrow of our government’.

‘They are violent and have shown America what life will look like if they succeed,’ he said on Monday.

President Trump has linked Antifa to the wave of protests which erupted in the wake of George Floyd’s death in Minneapolis in May.

Trump said that the US would designate Antifa as a ‘terrorist organization’, although in reality it has little formal structure.