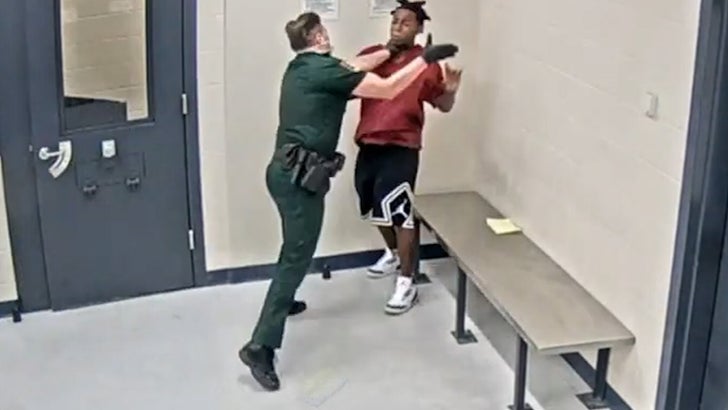 A Florida corrections deputy has been placed on leave after going on the attack against a 17-year-old at a juvenile center … and it’s all on video.

The teenager, Terrance Devon Reed III, was taken to the hospital after the violent altercation with Sarasota County Deputy Neil Pizzo last week. The surveillance footage shows Reed sitting on a bench with his arms tucked in his shirt when Pizzo marches toward him.

As Reed stands up and takes his arms out, the deputy immediately goes for his throat. A struggle ensues before Pizzo throws Reed to the ground, but at no point does the teenager appear to fight back.

Another deputy jumps in to try to wrangle Reed’s feet, and that’s when Pizzo strikes the teen on the back of the head multiple times. Reed’s then cuffed and helped to his feet … but not before suffering abrasions to his head.

The altercation reportedly began after Reed — who was previously arrested and charged with contempt of court, probation violations and cocaine possession — became uncooperative in a police lineup.

That, of course, doesn’t justify the violence by the deputy, and Sheriff Tom Knight says he’s disappointed in what he saw and Pizzo’s failure to de-escalate the situation.

Knight says he placed the deputy on administrative duty while an internal investigation is conducted.

We reached out for more … no word back yet.