Premier Daniel Andrews has lost confidence in himself as he faces increasingly harsh criticism over his ongoing lockdowns, body language experts have claimed.

Mr Andrews has faced the media every morning for almost 70 consecutive days since Victoria was rocked by a deadly second wave of COVID-19 infections. 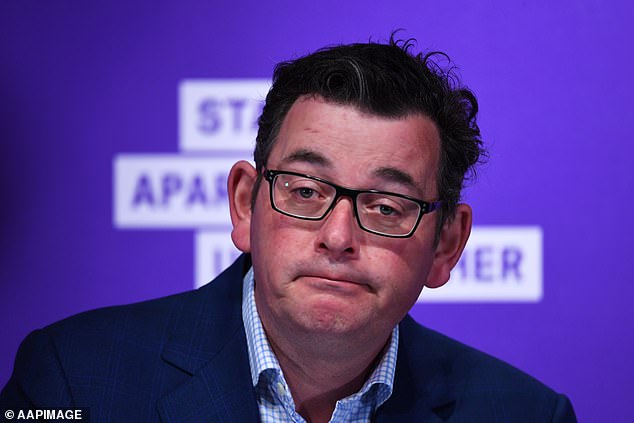 Leadership speaker Dr Mahler said while the premier has a tough job during the health crisis his body language revealed he was struggling to project authority and connect with his audience.

‘What I’m seeing is management but not leadership,’ she told Daily Mail Australia.

‘Management is answering questions, giving data. Leadership is changing hearts and minds of the populace.’

Dr Mahler said she one major tell was how the premier put his energy into the upper half of his body by leaning on the podium.

‘This is not a good sign. When you’re being powerful, you must have your energy in the body,’ she said.

‘He clenches his mouth very tight and shuts his eyes.’

Vision from the press conference shows the premier gripping the sides of the podium.

Dr Mahler also noticed the premier looking down to the bottom right when he answered questions. 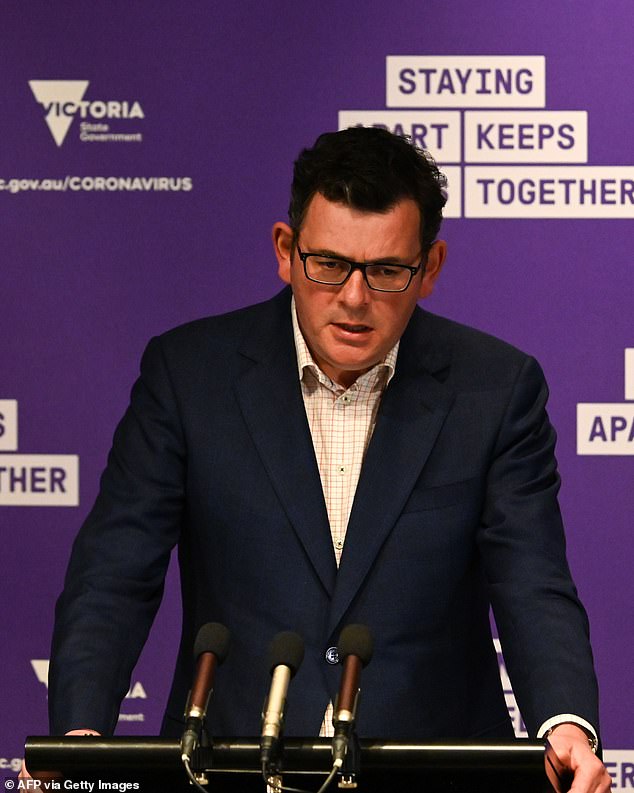 Body language expert Dr Louise Mahler said the premier puts his energy into the upper half of his body by leaning on the podium. ‘This is not a good sign. When you’re being powerful, you must have your energy in the body,’ she said 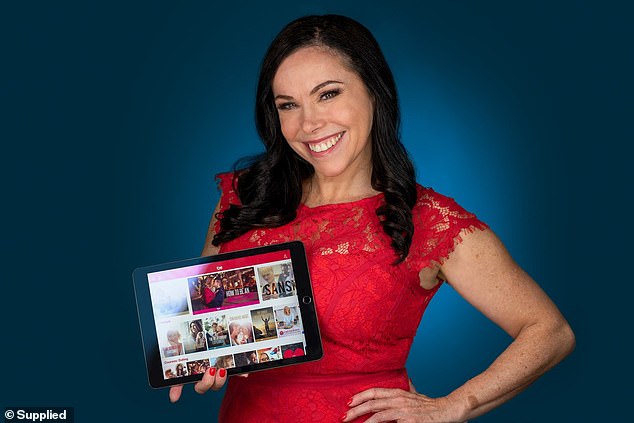 ‘He looks down and reads, his only compensation to his audience is raising his eyebrows,’ she said.

‘He will lift his hand up as a karate chop but look down at the same time.’

The body language expert also described the premier’s engagement with the media as ‘ordinary’ and described his voice as ‘monotone’.

Leaning forward, gripping the podium, looking down: Lack of leadership and confidence

‘He’s almost unbearable to listen to,’ she said.

While Mr Andrews has appeared at press conferences for almost 70 days in a row, Dr Mahler said it didn’t appear as though he had improved his public speaking skills.

‘He is practicing the same thing but becoming more boring and disconnected.’

‘There is no doubt that Dan Andrews’ confidence has taken a hit,’ she said.

‘His non-verbal communication clearly indicating a man who knows that he’s fallen out of favour with the Victorian public and is bracing for whatever comes next.

‘Love him or hate him Dan Andrews is a politician who wears his heart on his sleeve which means that this apprehension, anxiety, and sadness is on display for all to see.’

Ms Loisel said the premier tries to mask his emotions with a stiff upper lip, as do the majority of politicians.

‘What we’re seeing is genuine sadness, the same sadness that many if not most Victorians are feeling,’ she said.

‘That sadness, that sense of deflation and exasperation is reflected in Mr Andrews’ withdrawn posture, tucked chin, lowered head, and downturned compressed mouth.’

Ms Loisel said the premier’s withdrawn nonverbal communication is likely a reflection of the pressure of the pandemic. 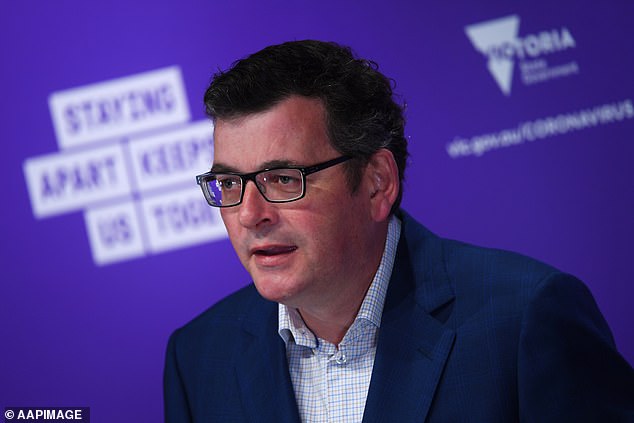 Mr Andrews is seen during his daily coronavirus update on Tuesday

Focusing on Mr Andrews’ facial expressions, the body language expert said it was obvious the premier is tired.

‘His stress, sadness, anxiety and overwhelm on display for all to see,’ Ms Loisel said.

‘His lifted shoulders, tucked chin, compressed downturned lips, tongue movements, averted gaze and use of pacifying or soothing gestures are a clear indication of negative emotion and that all is not well.’

But Ms Loisel pointed out that while he did not exude confidence while speaking, his answers to questions made it clear he backs his policy choices.

‘Whilst clearly apprehensive during each question, Mr Andrews’ body language and facial expressions reveal a man who believes in the data and that the chosen path forward is the right one,’ Ms Loisel said.

She said the premier braced himself for each question thrown at him by journalists on Tuesday before answering them with ‘increasing confidence’.

Dr Mahler, who has a PhD is on leadership and the techniques used to lead, said Mr Andrews should focus on making eye contact and delivering powerful statements.

‘None of this is happening,’ she said. 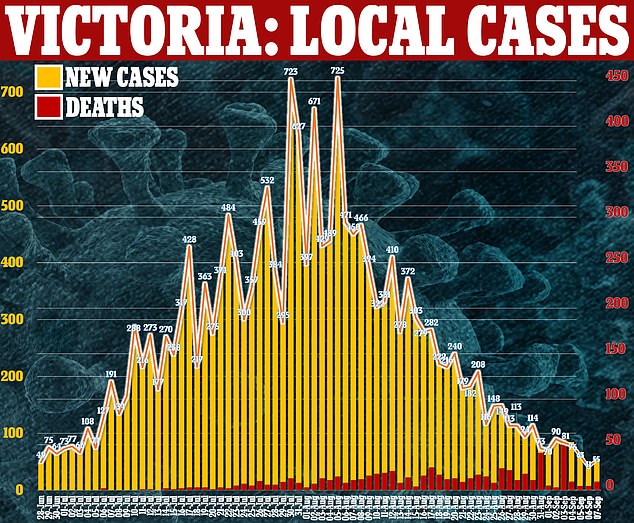 Mr Andrews typically begins his daily coronavirus updates by relaying the data from the past 24 hours.

He reads out the new COVID-19 cases and deaths as well as the number of tests conducted, before making announcements and taking questions from journalists.

On Tuesday, the premier said there were 55 new infections and eight deaths.

‘There are 19,615 confirmed cases of coronavirus in total since the beginning of the pandemic in Victoria. That is an increase of 55 since yesterday’s report,’ Mr Andrews began the press conference.

‘There have, I am sad to say, been 683 Victorians who have lost their life due to this global pandemic. That is an increase of eight since yesterday’s report.’

The body language referred to a picture where the premier is standing on one leg, which she said gives the impression he doesn’t care about what other people think.

She also shared tips for the premier to present like a leader.

Dr Mahler would also like variation in his vocal tone and for the premier to deliver ‘creative stories to lead our thinking in the right direction’. 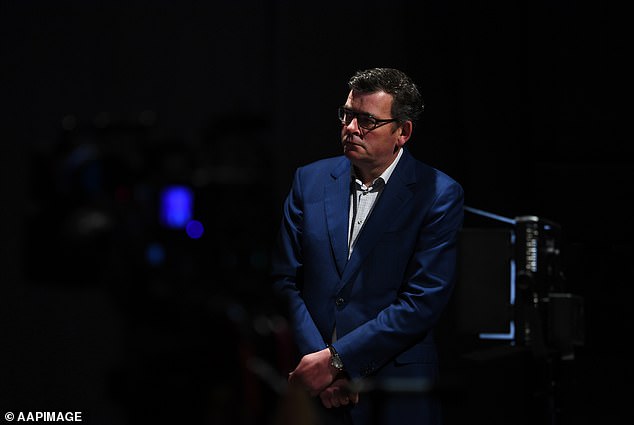