Rescue crews in North Carolina have recovered the body of a five-year-old girl who was swept away in her mother’s car by a flash flood earlier this week, but the search for her missing four-year-old brother continues.

Johnston County Sheriff Steve Bizzell confirmed that Alexa Castro’s body was found in a creek near Neuse River at around 4.30pm on Wednesday.

Dozens of volunteers who had been searching for the missing brother and sister formed a prayer circle after learning of Alexa’s recovery.

‘It’s a sad day yet a good day, because at least the mom knows where the girl is,’ Bizzell said, according to WRAL. 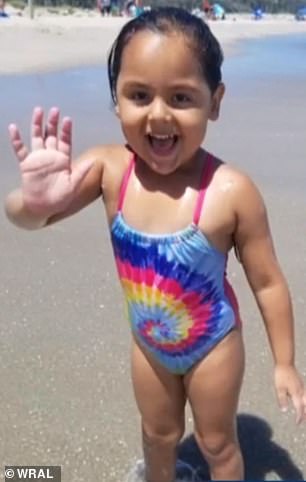 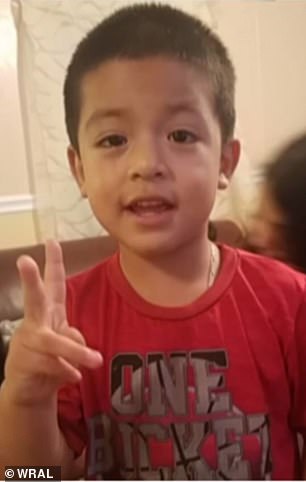 The body of Alexa Castro, 5 (left), was pulled from a North Carolina creek on Wednesday, less than 48 hours after she was swept away by flood waters. Her brother, Abraham Martinez Jr, 4 (right), is still missing 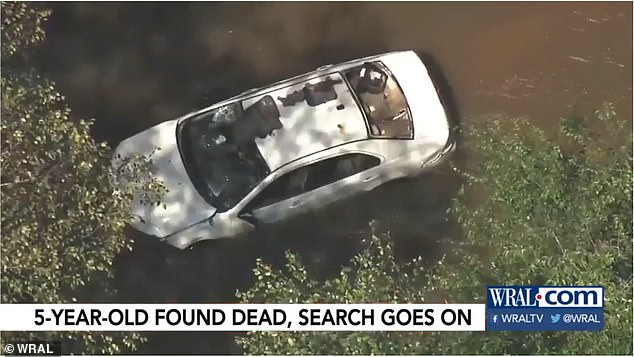 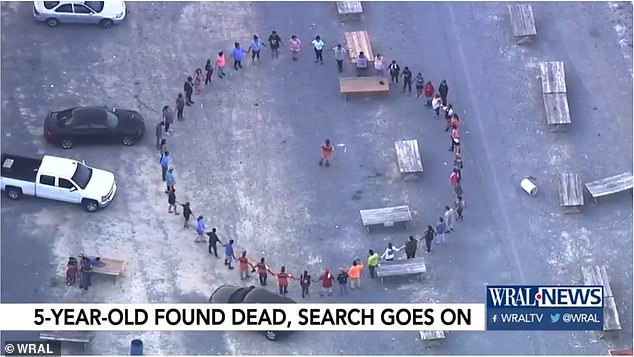 ‘My only duty right now is to find my son,’ Abraham Martinez Sr said in Spanish during an interview with The News & Observer. ‘The Lord gave me back my daughter, and now just my son is missing. Even though she isn’t my biological daughter, I love her the same, and it hurts me a whole lot.’

Nancy Martinez, a cousin of Abraham’s father, said Wednesday was a difficult day for the family.

‘We’re still hoping and praying we find Abraham before the night is over,’ Martinez said.

The search operation was suspended overnight but resumed early his morning.

Loved ones said that Alexa and Abraham’s mother, Vanessa Castro, has been discharged from the hospital and is doing well physically.

The woman and her two children were traveling along Galilee Road in Smithfield, outside Raleigh, on Monday night when rising water flooded the road and swept the vehicle away.

Recordings of the mother’s 911 calls from that night obtained by News & Observer captured her growing panic and anguish.

The dispatcher instructed Castro to climb with her children onto the roof of the car and promised her that help was on the way.

The mom-of-two said she was able to get her son onto the roof, but her daughter was still stuck inside.

Flood waters then swept the car away, leaving the mother clinging to a tree.

‘She’s gone,’ Castro screamed on the call, referring to her daughter. ‘She’s gone. She’s in the water. She was so scared she wouldn’t let go.’

Rescuers were able to initially pull the mother and son from the raging torrent but the treacherous conditions overturned the rescue boats and Abraham slipped the grasp of a firefighter and was lost again.

Four swiftwater rescue boats capsized in the extreme currents, authorities said, meaning first responders also had to be saved from the perilous waters.

‘The water was so raging the other night, it was throwing the boats up against the trees,’ Sheriff Bizzell said. ‘We’re fortunate that we had no loss of life for first responders the other night.’

The mother’s white Mazda has since been recovered but there was no one inside. 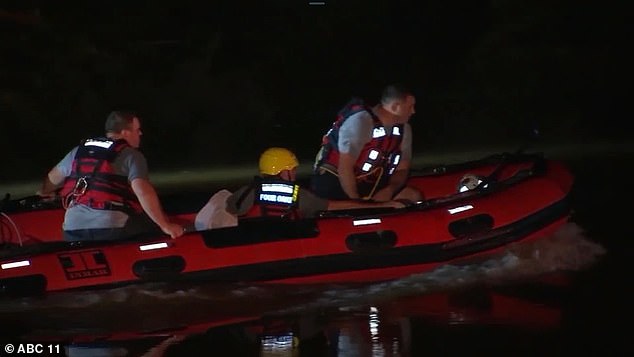 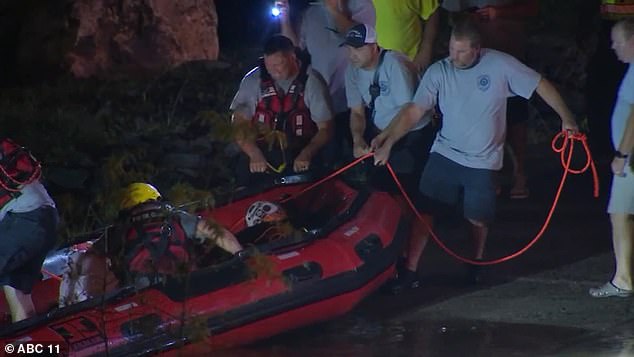 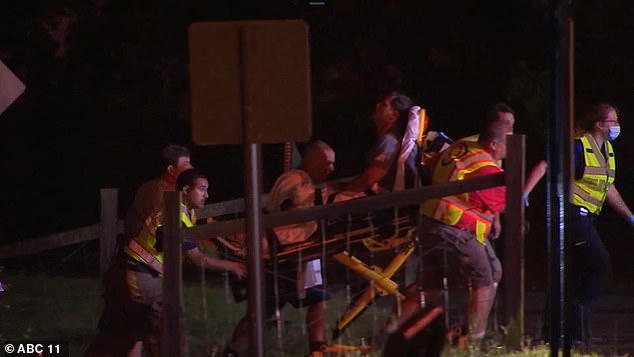 The mother, Vanessa Castro, and two emergency responders were taken to hospital

Smithfield, Wilson Mills, Princeton, and Four Oaks fire departments all responded to a 911 call from the mother at around 11.30pm on Monday, according to Johnston County emergency officials.

Smithfield Fire Chief John Blanton said at a press conference Tuesday rescue crews managed to get the mother and one child into recovery boats on the way to safety when the boats capsized.

The rescue teams grabbed the mother and were able to get to safety, but the child slipped away in the fast-moving water, he said.

‘They got into the water and they were able to rescue the child, a child and the mother,’ Blanton said.

‘The water was so turbulent that the boat capsized and they lost the child.’ The 5-year-old girl and her younger brother were traveling with their mother along Galilee Road in Smithfield, outside Raleigh, Monday night when rising water flooded the road and swept the vehicle away. The car was recovered Tuesday but the children were not inside (above) 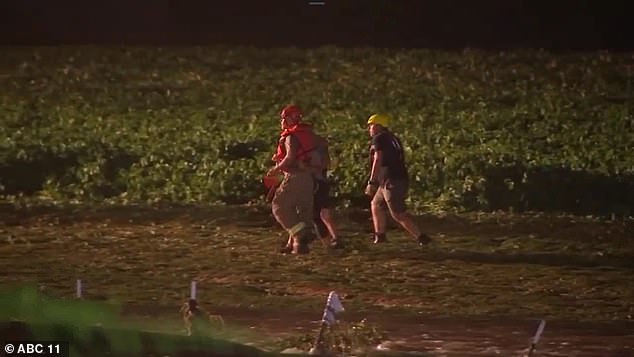 Four boats were lost in the rescue mission to save the children, he added.

Two firefighters suffered minor injuries when they were dragged at least a mile down the river by the current.

‘The amount of water and the current is so strong, it overcomes you when you start to turn a boat, and you’re in debris and tress and such, so they were fighting against that as well, so they’d hit a tree, they’d flip over. That’s basically what they were in last night,’ Blanton said Tuesday.

The mother and two first responders were taken to a local hospital for treatment.

Family friends told WRAL.com the mom has since been discharged from hospital. 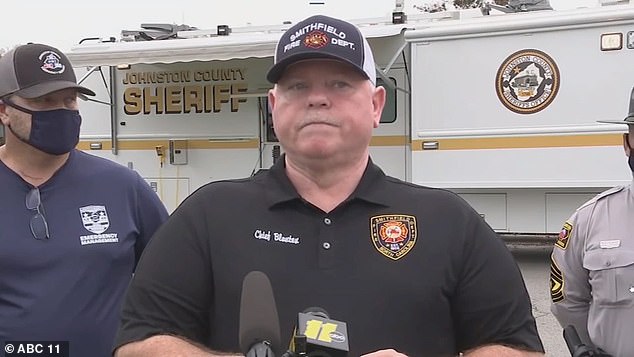 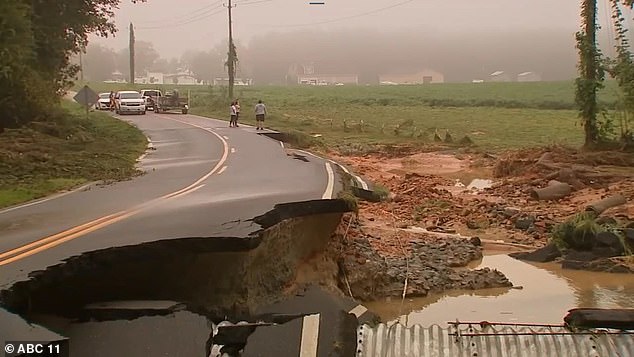 The aftermath of the flooding on the road. More than seven inches of rain fell in Smithfield overnight Monday, causing numerous roads to flood in the area, emergency officials said

On Tuesday morning, search crews found the family’s car but there was no one inside.

A helicopter, heavy-duty all-terrain vehicles and K-9s all joined in Tuesday’s search but did not locate the missing children.

Relatives of the missing children were also seen pacing the area, looking for signs of their loved ones.

Johnston County Sheriff Steve Bizzell said the search for the young children had been suspended for the night at around 5 p.m. Tuesday and would resume at 7:30 a.m. Wednesday.

At this time – more than 24 hours after the tragic incident occurred – the search is still being treated as a rescue and not a recovery mission.

An elderly couple also had to be rescued when the extreme weather caused their car to overturn on the nearby I-95. 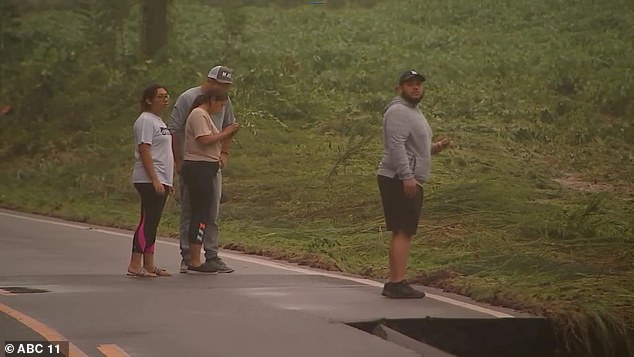 Relatives of the missing children were also seen pacing the area Tuesday, looking for signs of their loved ones 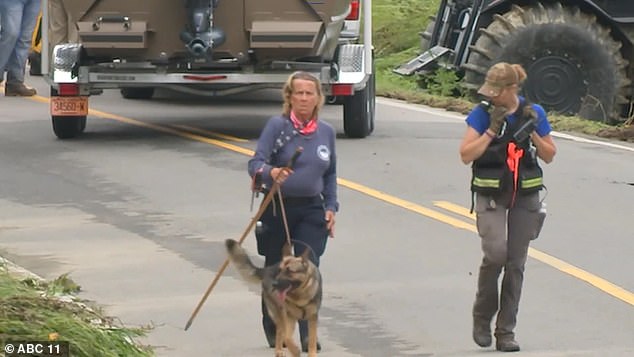 A helicopter, heavy-duty all-terrain vehicles and K-9s all joined in Tuesday’s search but did not locate the missing children