One of the world’s most popular fashion brands among teenage girls is at the centre of a racism storm after claims that ‘deplorable’ messages targeting black people were circulated by company bosses.

The Brandy Melville line, which has been worn by celebrities including pop star Ariana Grande, is such a phenomenon on Instagram it has been dubbed the first retail ‘Insta-brand’.

It has stores all over the world, including London, but has been criticised for its disproportionate use of white models and a lack of diversity among its store staff.

Documents lodged in a Californian court have now made extraordinary claims about racist policies at the heart of the firm.

The allegations, made by the former operators of Brandy Melville Canada as part of a wider dispute about licensing, centre on material exchanged on a phone text group called ‘Brandy Melville gags’.

It includes a picture of a Hitler lookalike crying at the racial diversity of pictures of modern European men and a National Geographic picture of an early human juxtaposed with a young black man.

Another image shows a woman holding a T-shirt at an angle to make it spell ‘Hitler’.

It is alleged the material was circulated among some of Brandy Melville’s most senior executives. 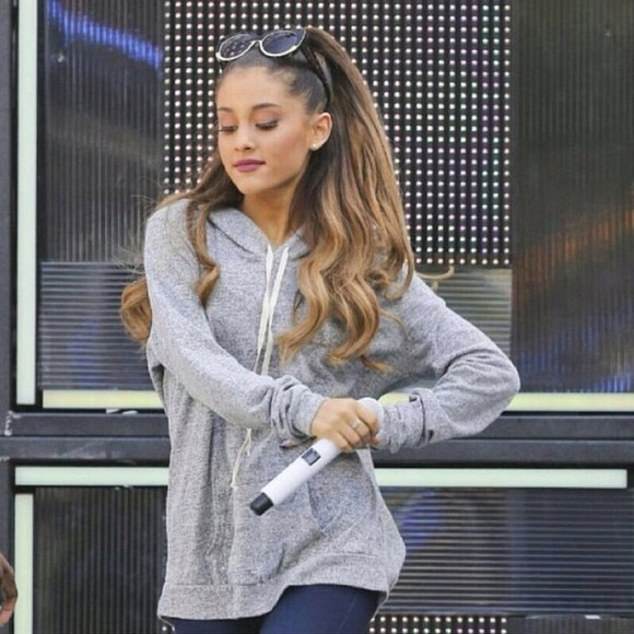 The Brandy Melville line, which has been worn by celebrities including pop star Ariana Grande (pictured), is such a phenomenon on Instagram it has been dubbed the first retail ‘Insta-brand’

Scott Gizer, a lawyer representing the plaintiffs, said: ‘It’s shocking to me that such a large company would tolerate this.’

The complaint against Brandy Melville says: ‘[The] postings featured deplorable written messages and pictures targeted at persons of colour.’

It is also alleged an executive ordered a store in Canada to be shut down because ‘the clientele …were ‘ghetto’, insinuating the customer base was mostly ethnic minorities that did not fit in with Brandy Melville’s ‘image’.’

The same executive is accused of complaining the store needed to hire ‘attractive white girls’. The store operators in Canada say they believed it was illegal to hire and fire staff on looks and ethnic origin.

Bastiat USA, which trades as Brandy Melville, has not yet filed a defence to the legal complaint lodged at the Los Angeles County Superior Court. Neither Bastiat USA nor Brandy Melville responded to requests for comment.