Of all the David Mitchells on Twitter, is this one (‘the one who does Peep Show and things, not the Cumbrian origamist,’ he explains) the most reluctant to be there?

The panel show star and comic actor has 2.2 million followers, a vast audience at his fingertips – every entertainer’s dream, surely?

Well, not David’s. He hates Twitter. He feels tortured by it. ‘I was always resistant to social media because instinctively I’m a bit of a Luddite. But now I actually just think it’s evil,’ he admits.

‘I went on Twitter about 11 years ago because someone was impersonating me, so I signed up and said, “No, this is me”. But then you’re on it, and when you’re on television the followers build up.’

At first he found it ‘pretty vacuous but compelling. I remember it was rare for anyone to say anything negative. 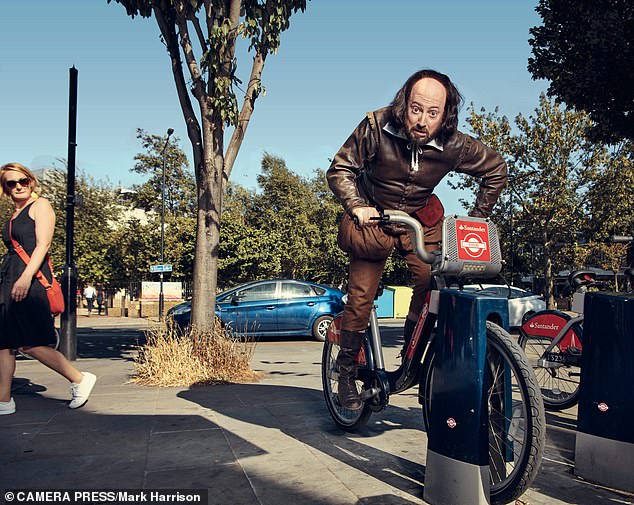 David Mitchell is rehearsing for The Upstart Crow, a West End version of his Shakespearean sitcom. Written by Ben Elton, the TV show was a comedy that ran for three series, following the playwright and his never-ending commute between Stratford-upon-Avon and London

‘Now, it’s all, “Cheese and pickle? You know what the dairy industry does, don’t you?” The atmosphere has darkened.

‘The whole thing has gone sour, bringing out the worst sides of our natures. It’s making the voices of argumentative people louder than the voices of moderate and contented people.

‘It’s just become a nasty realm, full of people who are recreationally angry, looking to be offended. I’m 45 for goodness sake. It affects my brain chemistry. What is the effect of all this on someone who’s 16 and has never known anything else?’

Suffice to say his daughter Barbara, who’s four, doesn’t yet have a phone. He’s already fretting about what will happen when that day comes.

‘I don’t know how we’re going to manage it. But our daughter will have to be exposed to social media and the internet, because it’s the reality of the world.’ 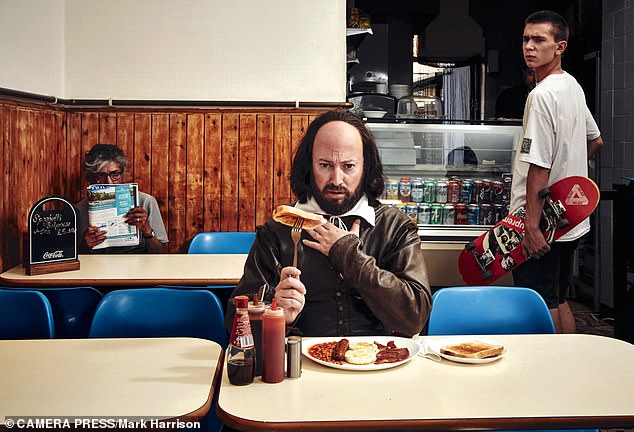 The stage show is in a similar vein to the TV series, but ‘has a different feel because it’s written for a different medium’, says David. It is also the actor’s first major stage role

So do he and his wife Victoria Coren, fellow broadcaster and host of the BBC quiz show Only Connect, set a good example at home, with phones banned? Of course not.

‘We look at ourselves, phones in hand, and think it’s awful. You only get one life. Why are we using it to check emails? But the whole thing is addictive.

‘You get that sense of calm from having checked your messages, but only for about five minutes, then you think “I’d better check again”. I wish I could say, “No more…”’

David is exhausted today, and not just by Twitter. We meet backstage at a London theatre where he’s rehearsing for The Upstart Crow, a West End version of his Shakespearean sitcom. 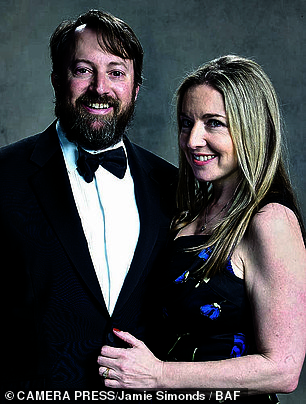 David and his wife Victoria (pictured together)– daughter of legendary columnist Alan Coren, and sister of restaurant critic Giles – met at a party in 2007

Written by Ben Elton, the TV show was a Blackadder-esque comedy that ran for three series, following the ups and downs of the playwright and his never-ending commute between Stratford-upon-Avon and London.

The stage show is in a similar vein to the TV series, but ‘has a different feel because it’s written for a different medium’, says David.

‘Obviously, because it runs over an hour and 40 minutes there has to be more in the way of subplots, but the humour comes from the same things, the reflections on the modern day through the old days.’

This is part homage to Shakespeare, part showing him as just another ordinary man trying to make his mark.

‘It’s as much about the travails of an aspiring middle-aged, middle-class man struggling to make it in a world that’s potentially hostile to him. That was Ben’s first insight with the sitcom and it was so clever.

‘Shakespeare is quite a grounded sitcom figure. He has his flights of poetic fancy, but also he’s thinking about the box office and his position and all these forms of aspiration and jeopardy that we associate with sitcom characters like Captain Mainwaring or Del Boy.’ 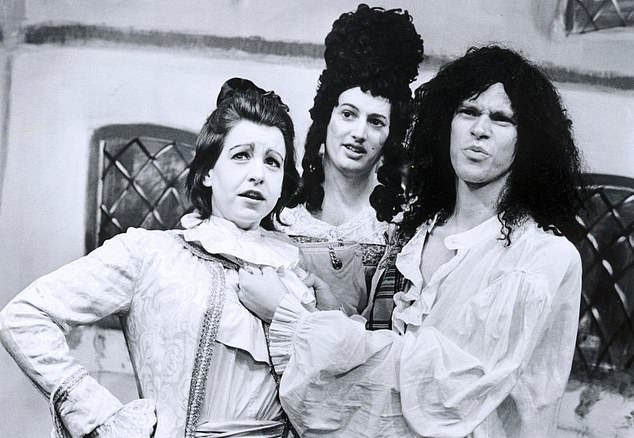 And then there’s the codpiece. Leather, too. Laughs are pretty much guaranteed.

It’s David’s first major stage role, and he’s glad he’s making his West End debut in a comedy part rather than a serious one because it’s easier to gauge if the audience is enjoying it.

Strictly? With my back? 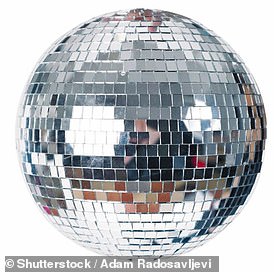 The prospect of a sparklier showbiz role has never appealed to David.

Has he even been offered Strictly? A stint in the jungle? ‘Ha ha. I don’t think I have,’ he says.

‘Well, maybe a couple of times my agent has been sounded out, but I wouldn’t want to do any of them.

‘I don’t think I’d enjoy it. Also, Strictly seems like so much work. They rehearse all week.

‘It’s not like they turn up half an hour before the show and learn a little step. All week in a studio! With my back?’

He hasn’t gone down the route of making documentaries of the I’m-taking-my-mother-to-Peru type either, which every other comic seems to have done.

‘No. Some of those programmes are good. And some of them… hmmm. The thing is, once you’re on TV you’re offered a lot of things that are really about who you are.

‘I don’t want that. I’m happier either pretending to be other people or making stuff up or reacting to things. That’s what I love about panel shows.’

‘I don’t know how you judge drama in front of an audience. Someone once suggested it’s by the absence of coughs, but that seems quite fraught.

‘What if someone just has a cough? Or what if they’re actually bored to tears but just quite healthy? I’d rather go for laughs. It’s quantifiable.’

Many of David’s laughs come from being nerdy, old-before-his-time and slightly out of touch with modern society.

It’s served his public persona well, obviously, but is it true? To a point. When we get chatting about hobbies today he says ‘comedy was my hobby, and then it became my job’, but then admits that he does ‘like a jigsaw’.

How many pieces? ‘A thousand. The easiest of the difficult ones. But I could probably do with having more hobbies. I do find as I get older I can’t relax as easily as I used to. Maybe I should get into model aircraft.’

He says he’s quite a fretful soul by nature, always worrying if he’s locked the door. He’s married to a worrier, too.

‘That shouldn’t be the case. You should have a worrier married to someone who doesn’t worry. We’re both lying there worrying about the front door.’

He doesn’t necessarily worry about the big things, though. He doesn’t have the air of a man who frets about his career or his place in the world.

Someone in his shoes (brogues, mostly) might well have gone a bit giddy with all the opportunities that come with being on television, yet he’s never been tempted to follow the likes of James Corden to America.

‘It wouldn’t appeal. I grew up obsessed with British TV. It was Monty Python, Blackadder, The Young Ones, Yes, Minister. That was the world I was desperate to be part of.’

His comedy career started at Cambridge University’s famous Footlights drama club where he met his sidekick Robert Webb. They were unlikely partners.

David says he was awed by Robert’s coolness (on account of the fact he had long hair and an earring). They shared a similar humour.

‘We laughed at the same jokes. Even though we were very different, it just worked. We had a chemistry as performers. It was just something we happened upon.’

They took their show to the Edinburgh Fringe, and from there secured their own sketch show before going on to star together with a young Olivia Colman in BBC sketch show Bruiser in 2000 and Channel 4’s Peep Show, which ran for nine series from 2003. 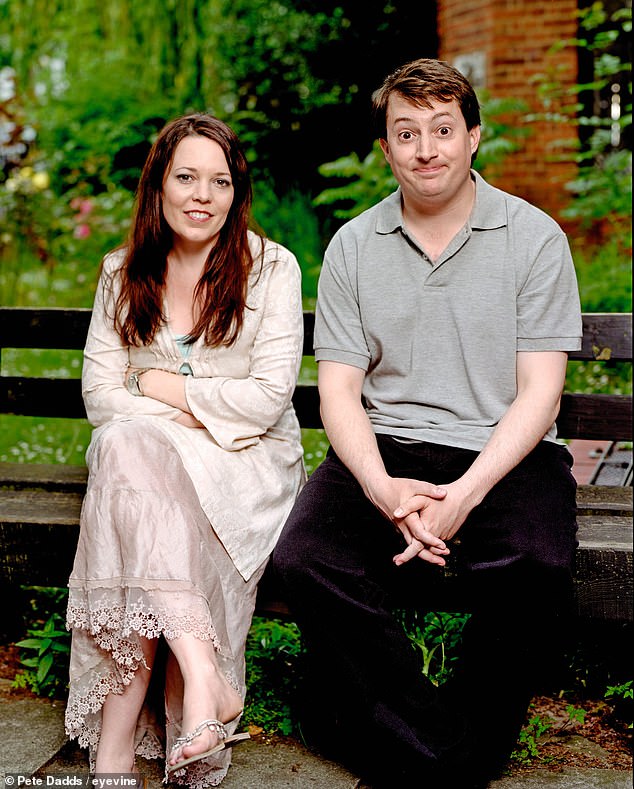 David has since appeared on pretty much every panel show going, from QI to Mock The Week and Would I Lie To You?. ‘Basically I’ve now got the job I most wanted,’ he says.

He’s also got the home life he never knew he wanted. I remind him of an interview he did many moons ago where he said he couldn’t ever imagine being a father.

‘I couldn’t then. Intellectually, I probably accepted that when you become a father something happens, because it did seem to be that people were really into their children. But I only got it in principle. I didn’t really understand.’

So can he sum it up, fatherhood? Nope. But it’s clear that Barbara (her name comes from one of the Banks children in the original Mary Poppins books) has stolen his heart.

‘I think you’d maybe need Shakespeare to put it into words. This person comes into your life, who literally did not exist before, and brings with her a totally new dimension of feeling.’

David can be as cynical as they come, but when he talks about his wife and daughter it’s with unadulterated sunniness.

He and Victoria – daughter of legendary columnist Alan Coren, and sister of restaurant critic Giles – met at a party in 2007 and he was smitten.

They went out a few times, but it seemed their romance was not to be. She started seeing someone else. He was heartbroken.

He told Victoria that he knew she was the one for him, and he would wait. He waited. And waited. They eventually married in 2012.

Was he confident she would return to him? ‘No, I wasn’t. But what I felt at the time was that I couldn’t contemplate any other outcome with which I would be remotely happy, so I was just going to stick with it.’

And now? ‘Well, it’s brilliant, but obviously I’m nervous too, because being that glass-half-empty person I worry endlessly about what is going to happen to her, to our child, to me.’ 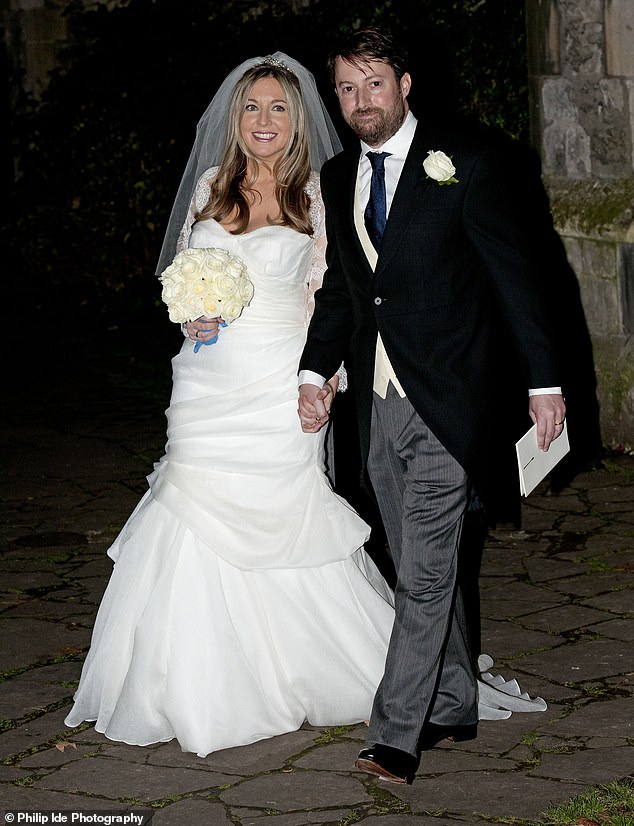 David and Victoria married at St Peter’s Church in London in 2012 (pictured) – five years after meeting at a party. They now have a daughter Barbara, who’s four

He seems like a man who’s still pinching himself, though, which is a little love story all in itself.

‘I do often think, how can I be so lucky that she has decided to spend her life with me?

‘And I also think people will think there’s something more about me than there seems to be, because otherwise Victoria wouldn’t want to be with me.’

The Upstart Crow plays at the Gielgud Theatre in London until 25 April. Visit UpstartCrowThe Comedy.com for tickets.