Two bodega workers who were attacked by customers in the Bronx for asking them to wear face coverings said they now fear for their lives because New York’s mask laws ‘could get someone killed’.

Aneuri Castillo and Javier Franco were working at a bodega in Morrisania when they were attacked last month.

Castillo told Pix 11 that he was struck in the face by a customer who was asked to wear a mask while inside the bodega. 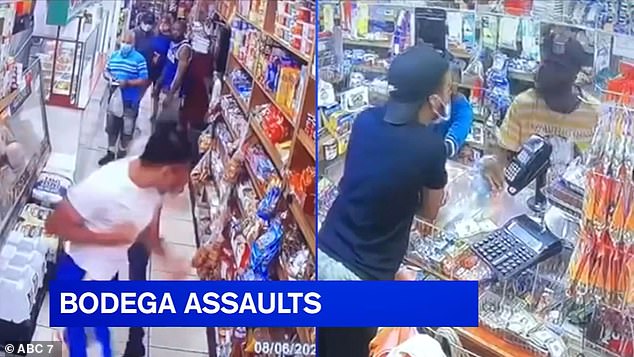 Two bodega workers who were attacked by customers in the Bronx for asking them to wear face coverings said they now fear for their lives because New York’s mask laws ‘could get someone killed’. Both attacks are pictured and happened within minutes of one another

‘This was shocking to me. I tried to do what the governor asked us. I told him it was the law. I’m scared! Maybe he’ll come back and shoot me. It’s so hard coming to work not knowing how the day will go,’ Castillo told the news outlet.

‘I have a family and they need me, I don’t want to die in the bodega,’ he added.

Franco made a similar statement after he was punched in the face while stacking the shelves in the bodega after asking a customer to wear a mask.

‘The mask law is going to get someone killed,’ Franco told Pix 11. ‘We are doing our best trying to obey the law so we don’t lose our liquor license, but it seems we could lose our life instead.’

According to United Bodegas of America spokesman, Fernando Mateo, both attacks occurred within moments of one another.

Mateo said organization leaders will be meeting with NYPD Commissioner Dermot Shea to address their concerns.

Mask laws in New York went into effect in July after the state suffered the most severe outbreak of the coronavirus in the US. 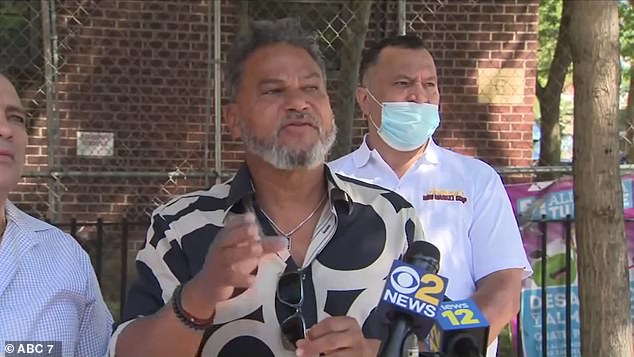 According to United Bodegas of America spokesman, Fernando Mateo, both attacks occurred within moments of one another. Mateo said organization leaders will be meeting with NYPD Commissioner Dermot Shea to address their concerns 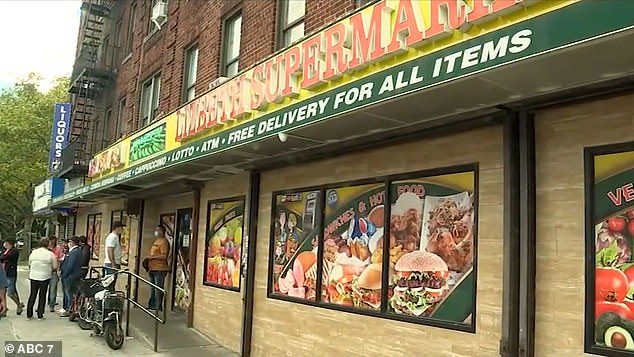 Both incidents occurred at this bodega in the Bronx last month

According to the state’s mask laws, any person over the age of two and able to medically tolerate a face-covering ‘shall be required to cover their nose and mouth with a mask or face-covering when in a public place and unable to maintain, or when not maintaining, social distance’.

And safety is not the only concern for businesses in New York City under the leadership of Gov Andrew Cuomo and Mayor Bill de Blasio.

After finally getting control over the coronavirus in New York, Cuomo has been taking extra precautions to make sure the state doesn’t become the epicenter for COVID-19 for a second time.

Some of those strict orders include not allowing indoor dining in New York City.

As of Tuesday, New York City is the only major city in the world that has yet to reopen indoor dining, despite having greater testing than anywhere else and an infection rate of less than one per cent.

The industry in the Big Apple is at its wits end with Cuomo and Mayor Bill de Blasio who inexplicably won’t allow discussions for indoor dining to resume.

They insist it is not safe and that other regions have seen a sudden uptick in cases when it begins but every other city in the state of New York is allowing it and most around America are too.

Beyond the US, in cities including London, Paris, Milan and Beijing – all of which saw coronavirus spikes – indoor dining is happening safely.

It has driven restaurateurs and bar owners in New York to sue the city and state for $2billion in damages.

They are now seeking an injunction and are demanding Cuomo and de Blasio show the so-called scientific evidence they have that proves it cannot be done safely.