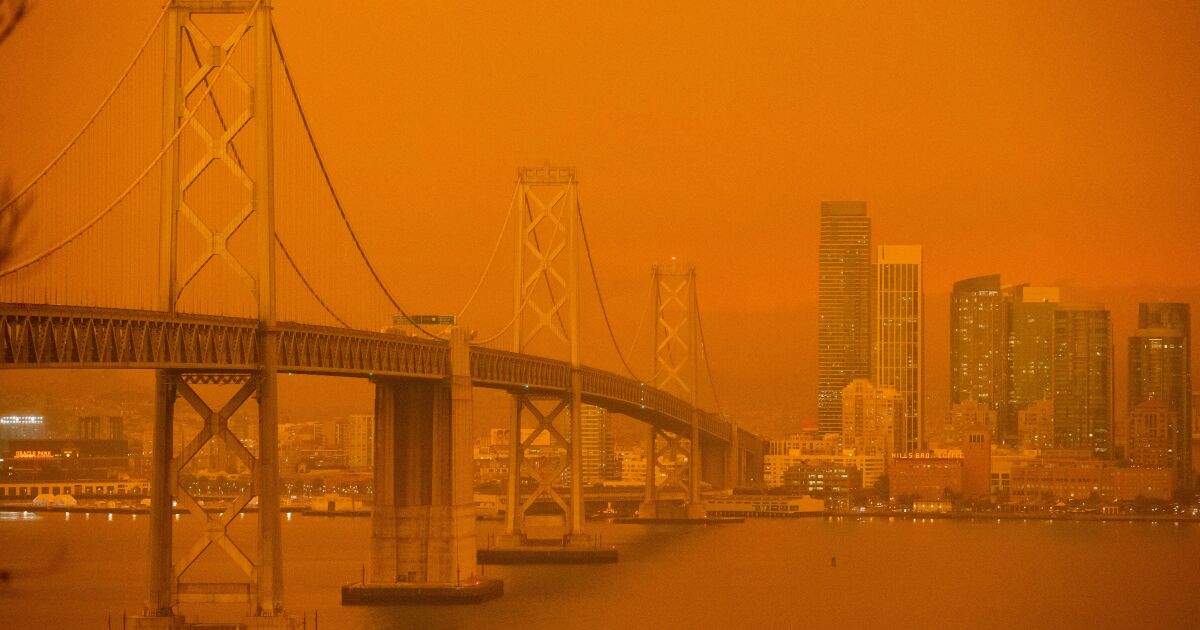 Shrouded in near darkness, beneath a gloomy, orange sky, Fabian Rios worked to repair a fire hydrant late Wednesday morning.

Working alongside the headlights of his truck, the Bay Area utility employee said the lack of light wasn’t troubling him.

“The real problem is the ash falling from the sky,” said Rios, who works for the city of Mountain View and was wearing a surgical mask. “I am just getting covered.”

As fires rage up and down the West Coast, the skies over California have taken an apocalyptic turn — choking the air with ash and smoke in some regions, while snuffing out sunlight in others. Rarely have so many Californians breathed such unhealthy air.

“About half of the state’s population has been impacted by wildfire smoke levels exceeding air quality standards,” said Melanie Turner, a California Air Resources Board spokeswoman, referring to tiny, lung-damaging pollution particles known as PM2.5.

In parts of Southern California, soot fell like snow. Air quality officials issued a wildfire smoke advisory for much of the region, warning “meteorological conditions will bring smoke and ash into portions of Los Angeles, San Bernardino, Riverside, and Orange Counties.”

People downwind of the Bear fire — including those in Paradise, site of a deadly 2018 blaze — suffered amid the smoke, with many unable to turn on air conditioners because of an intentional PG&E power outage.

And some of the state’s worst air quality came inside its most popular national park. The AQI in Yosemite Valley hit nearly 400 by early afternoon, about six times worse than the particle pollution in Los Angeles.

“What’s notable is that it’s everywhere,” said Anthony Wexler, director of the Air Quality Research Center at UC Davis. “So no matter which way the wind blows you’re getting hit by smoke and ash. It’s pretty brutal.”

In the Bay Area, a marine layer from the Pacific protected lower elevations from the oppressive, sun-smothering smoke, leaving the air tolerably breathable. But there were no views of the mountains from Mountain View. The skies darkened to a twilight-like dimness.

Street lamps along the peninsula’s El Camino Real brightened the road for noontime traffic, while hotels and restaurants in Palo Alto and Mountain View kept alight their marquee lights and entrance displays — lending a dinner-like atmosphere to their lunchtime patrons.

From Sacramento to the Bay Area to Monterey, motorists turned on their headlights to navigate the gloomy streets.

“Today the sky is almost completely dark and orange brown due to smoke coming from the August and North fires which is above the marine layer,” said Ralph Borrmann, a spokesman for the Bay Area air district. “So air quality is good in most places, but the sky looks dreadful due to the smoke filtering out the blue light spectrum and leaving us with orange only.”

Roger Gass, a meteorologist with the National Weather Service, said the smoke is keeping temperatures cool — 20 degrees lower than the weather service had anticipated for many parts of the Bay Area — and that coolness is keeping the smoke high, allowing the marine layer to remain over the region.

“Usually, the sun burns the marine layer off during the day, pushing it offshore,” said Gass.

But because the smoke is keeping temperatures so cool, the marine layer is staying put, and providing a buffer from the unhealthy smoke above.

At a briefing Wednesday, Gov. Gavin Newsom said he was stunned by the images he saw from his hometown. “The number of photographs that have been sent by family, friends this morning overwhelmed my inbox,” Newsom said at a briefing.

Federal satellite imagery showed massive plumes blanketing the length of California and much of the West Coast on Wednesday, extending south to Cabo San Lucas and far out over the Pacific Ocean.

These big plumes combined with soot and smoke from more localized fires to torment millions of Californians, many eager to get outside after months of coronavirus shelter-in-place orders.

In Southern California, the worst concentrations of smoke were projected to concentrate in communities closest to the Bobcat and El Dorado fires, according to the South Coast Air Quality Management District.

While the levels of fine-particle pollution in Northern California are not as high as they were during the 2018 Camp Fire, the smoke is persisting longer and over a widespread area of the state, according to the California Air Resources Board.

“We have had other bad smoke years,” said Turner, the CARB spokeswoman. “But we are seeing larger fires and more fires this year and that means a much higher population in both urban and rural areas that is exposed to dangerous smoke.”

Wildfire smoke consists of thousands of different compounds, including gases, liquids, solids and in-between honey-like textures, Its composition varies significantly depending on what type of vegetation was burned and how recently.

Some of the most dangerous soot is the smallest.

The particles known as PM2.5 are less than 2.5 microns in diameter — about 1/30th the width of a human hair. They are so tiny that they can be inhaled deeply into the lungs and pass into the bloodstream.

In the short term, wildfire smoke can irritate the eyes, nose and throat. It can trigger asthma attacks as well as raise the risk of heart attacks and stroke.

At greatest risk are children, pregnant women, the elderly and people with asthma and other chronic respiratory and cardiovascular diseases, as well as outdoor workers who face higher levels of exposure.

Wildfire smoke is elevated across so much of the state right now that “there’s a huge amount of concern about the health dangers,” said Bonnie Holmes-Gen, chief of the California Air Resources Board’s health and exposure assessment branch. “We have so many people that are exposed to dangerous levels of smoke.”

Research into past fires, she said, shows dramatic increases in emergency room visits for asthma attacks and other ailments during fire episodes.

“We expect that is happening again,” she said, urging people to take measures to protect themselves when there is wildfire smoke around them, and to stay inside and run an air filter if pollution levels are elevated.

Dar Mims, a meteorologist with CARB, said the foul air has lingered over Northern California for so long because the fires arrived during the summer, when the air is more stagnant.

“As these fires continue to burn they’re going to be at the whims of the wind shifts,” said Mims, adding that the smoky skies will likely linger until a “season-ender” storm dampens the tinderbox conditions.

While air quality in much of Southern California has remained in the “good” to “moderate” level at the ground level, satellite imagery shows smoke higher up in the atmosphere over much of the region. The district warned the region could also see more falling ash as “larger particles settle out of the atmosphere.”

The siege of smoke across the west is the result of a historic number and acreage of active fires that have besieged the state since mid-August, when a rare dry lightning storm ignited a spate of fires along the state’s central coast.

Since then, a pair of historic heat waves, combined with shifting wind patterns, and increasingly blazing acreage has left the state — and much of the West Coast — covered in a thick, choking smoke. “Unprecedented” was how the National Weather Service’s Bay Area office described it.

It’s a word that has been used to describe many of the natural disasters that have befallen the state this past month — disasters fueled by a bigger force than isolated heatwaves and lightning storms, said Wexler.

“Look around, we have a record number of wildfires, we have a record heatwave. What’s the common theme, folks? It’s climate change,” Wexler said. “We’re going to be seeing new stuff all the time, because we’re playing games with our planet.”

Some 6,000 feet above San Francisco Bay, at the top of Mount Hamilton, Elinor Gates, an astronomer at the University of California’s Lick Observatory, looked out at air thick with smoke and ash, the light an eerie, dark orange.

The observatory survived a fire that burned through three weeks ago, she said — adding to the apocalyptic scene she saw outside her window.

“The trees are black and the leaves a sickly brown,” she said. “It all lends to this sepia-like photographic quality … like an old disaster photo.”