Russian car lovers donned vintage outfits to flock the streets of Moscow and mark the 50th anniversary of the creation of the popular Lada car yesterday.

Gathering for the Gorkyclassic GUM Rally, the vintage vehicle enthusiasts celebrated the creation of one of their countries most well-known and trusted cars, with models dating back to the 1970s at the heart of the celebration.

The classic car show, which takes place once a year in the Russian capital, sees vintage car lovers gather together, some opting for vintage looks to go with their vehicles.

The Lada, which was first commercialised in 1970, was manufactured by AvtoVAZ, a Russian company now owned by the French group Renault. 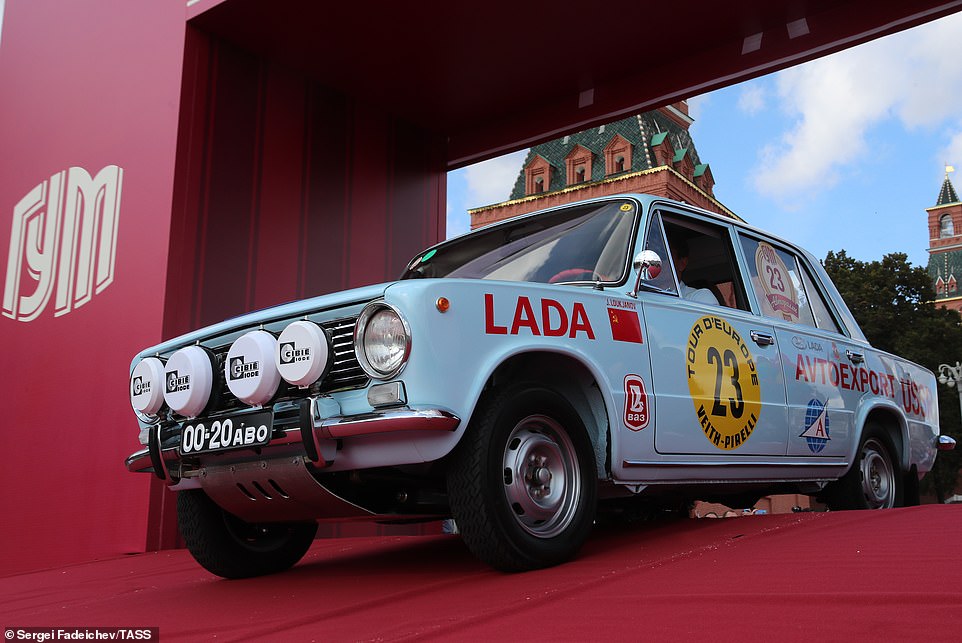 Gathering for the Gorkyclassic GUM Rally in Moscow, vintage cars enthusiasts celebrated the creation of one of their countries most well-known and trusted cars, the Lada. Pictured: A light blue Lada that once competed in the Tour d’Europe 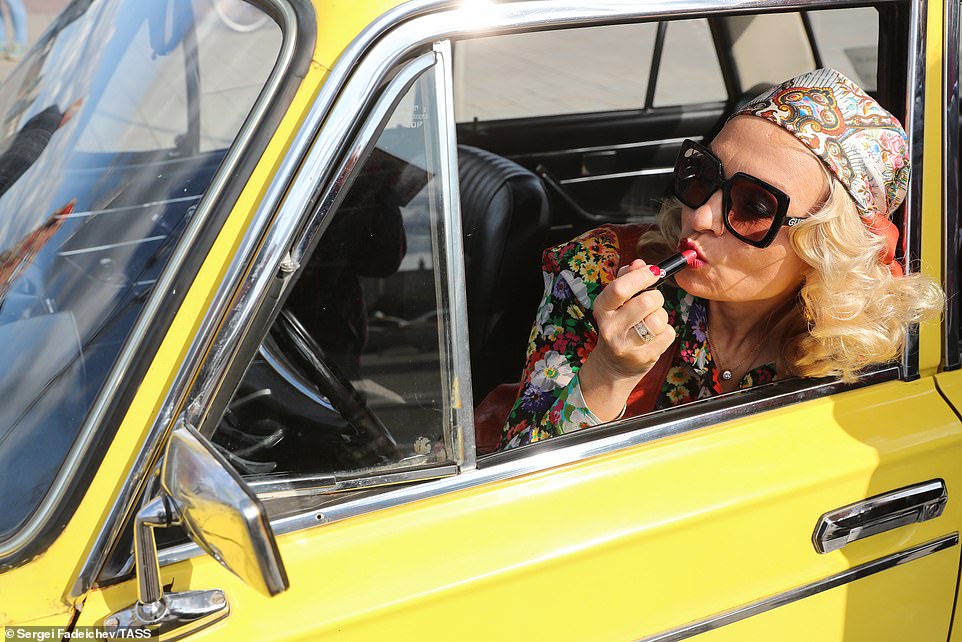 Ladas were first manufactured in 1970s and are one of the Russia’s most well-known cars. Pictured: a blond woman reapplies gloss behind the wheel of her yellow Lada

The show offered a window into the past, with many of the cars perfectly preserved to maintain their original interiors and features.

As the sun shone on the Russian capital, car fans made the most of the day, strolling between the different  models.

Visitors appeared in high spirits as they joined the owners of the vintage cars, who proudly showed their vehicles off.

The Gorkyclassic Motor GUM Rally takes its name from one of the biggest shops in Moscow. 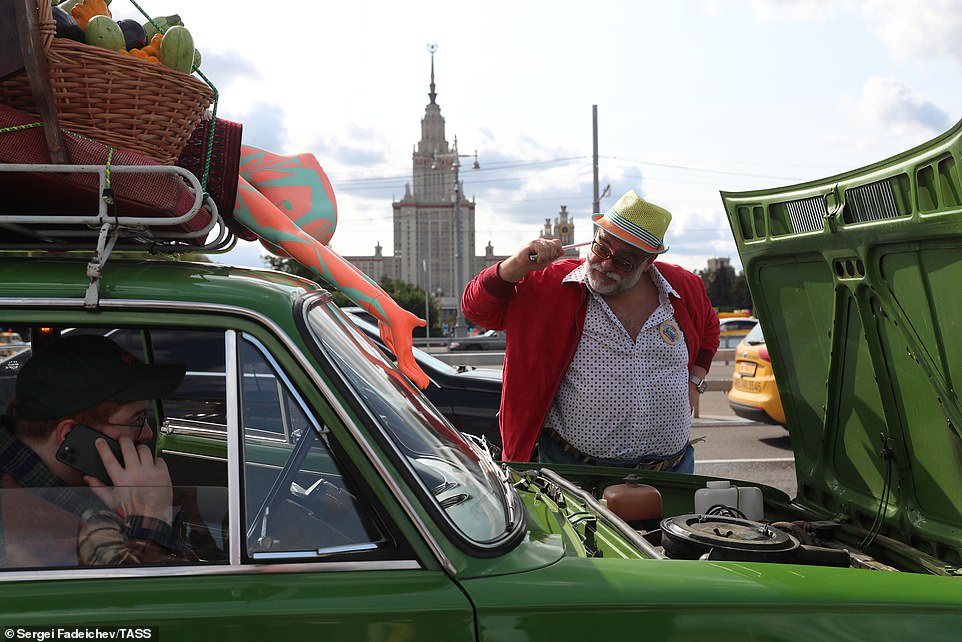 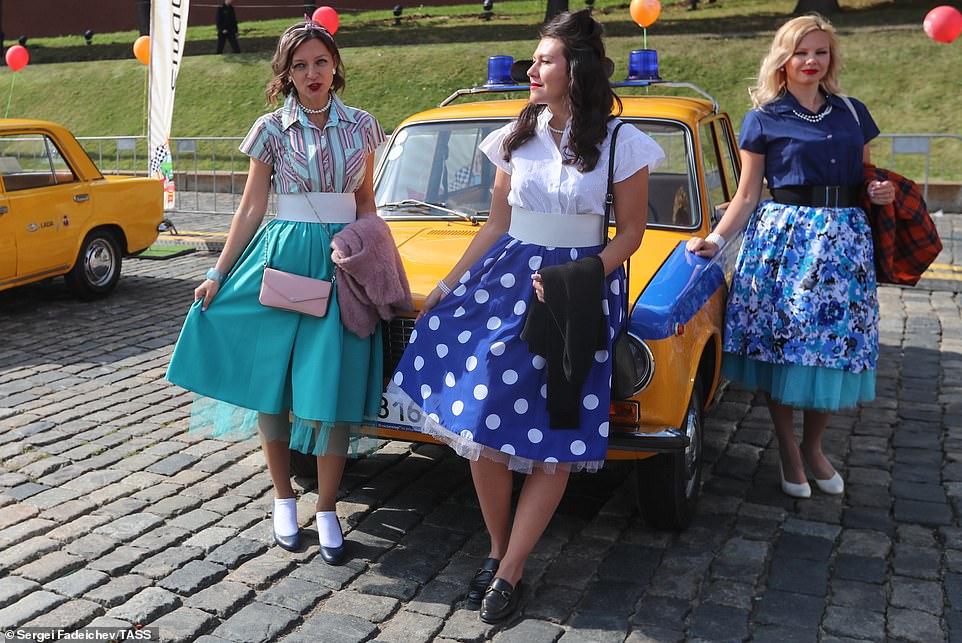 Many visitors to the show donned vintage outfits, with women opting for playful costumes as they posed next to a yellow and blue Lada

The original 1970 Lada car was the star of this year’s show with several models making it to the rally.

Families walked up to the Lada models, all parked together during the show, some of which were adorned with GUM rally stickers.

AvtoVAZ’s Lada, which was first manufactured in 1970, with technical help from Fiat, takes its name from a type of small boat in Slavic language.

It was born out of a cooperation agreement between Fiat and the Soviet minister of automotive industry Alexander Tarasov signed in 1966. 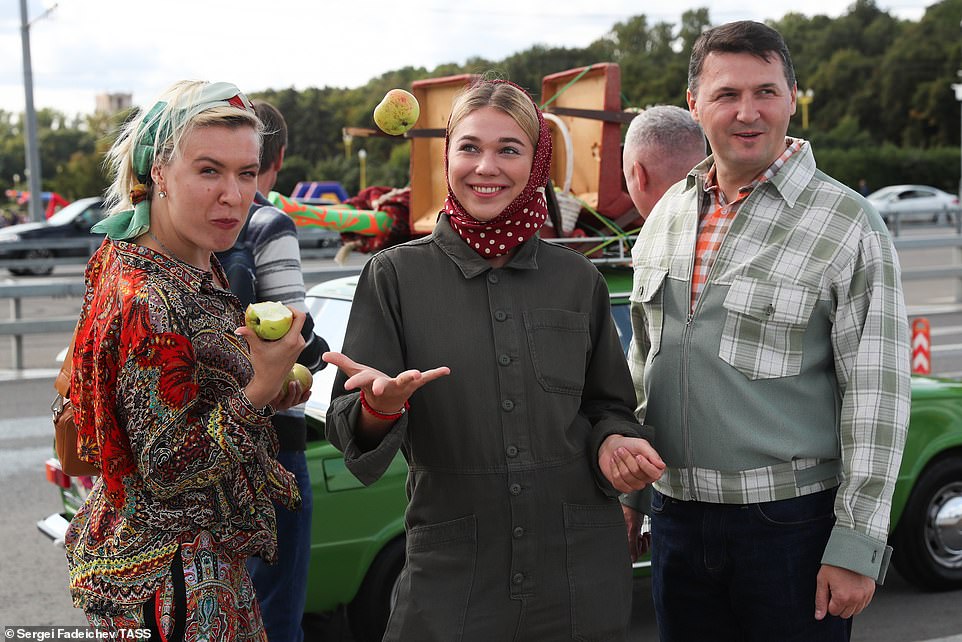 Other rally goers wore a selection of vintage costumes for the occasion, with one woman opting for a jumpsuit and red head scarf 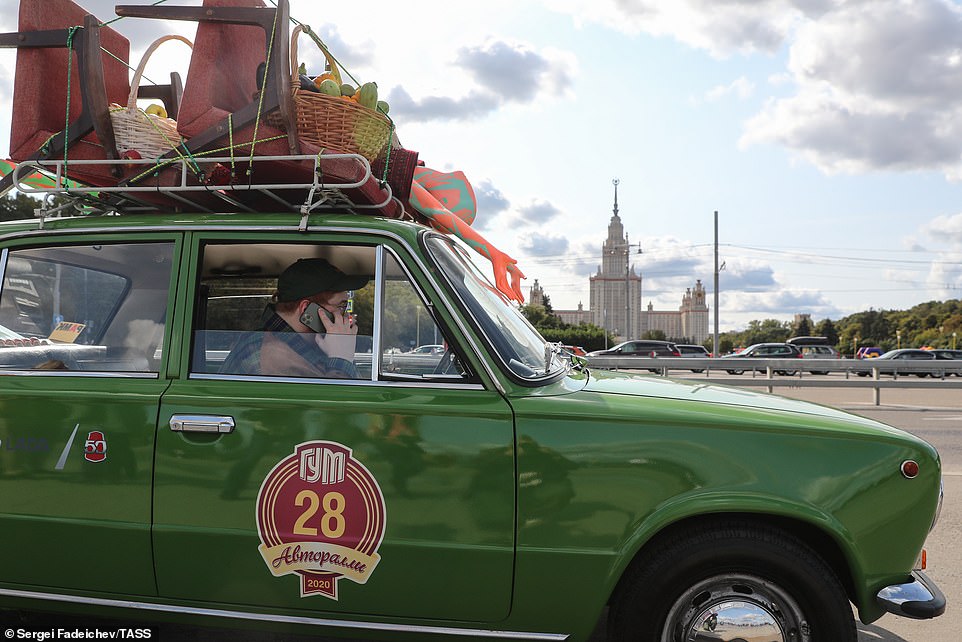 The top of this green Lada was propped with accessories, making it look as though the owner was heading off to a summer holiday 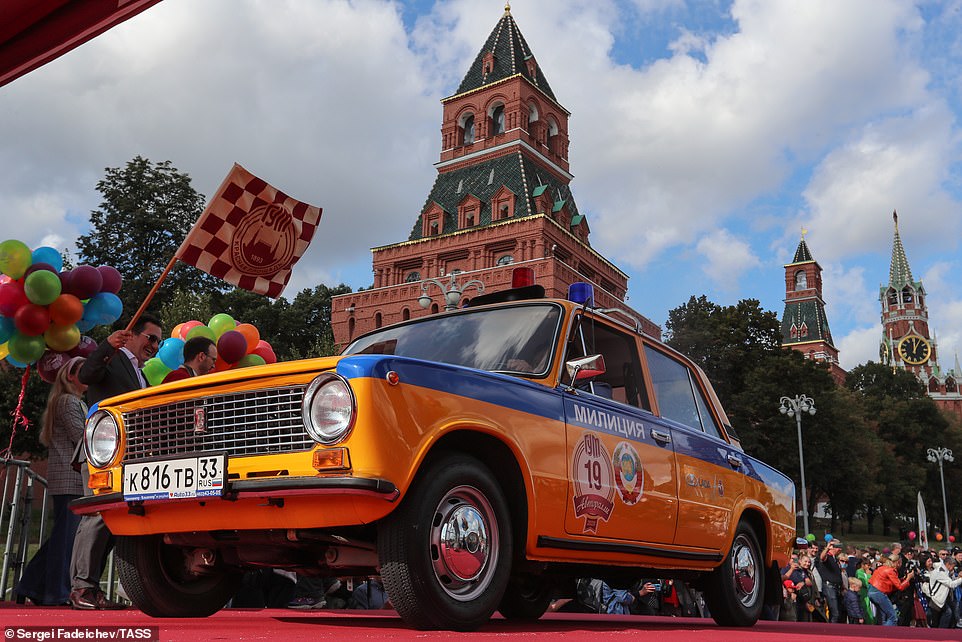 Crowds gathered to catch a glimpse of the vintage cars during the rally (pictured, a yellow and blue Lada is applauded by car fans) 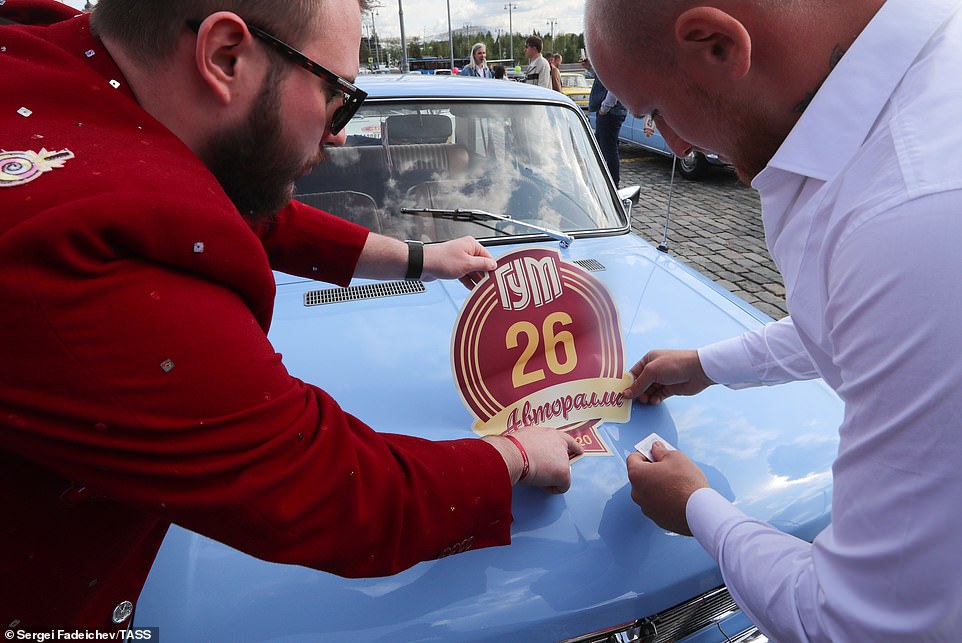 Two men place a GUM Motor Rally sticker on a blue Lada. The Lada was born out of a cooperation agreement between Russia and car manufacturer Fiat

The cars first appeared in Russia under the Zhiguli brand, but the brand’s name was changed to Lada when the vehicle began to be commercialised internationally.

The first ever Lada to be built was produced on the 100th anniversary of Lenin’s Birth on April 1970.

The Lada VAZ-2101 was the first vehicle to make it to the market in Russia. Its design was derived from the Fiat 124 Sedan.

There were very few repair shops around the country, and the Lada was marketed as DIY-friendly and easy to maintain. 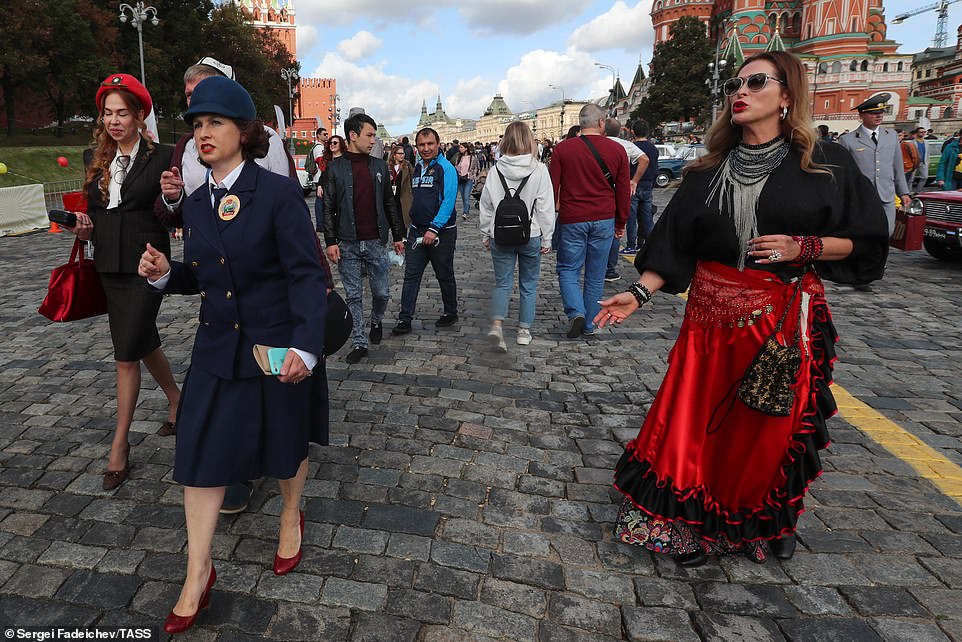 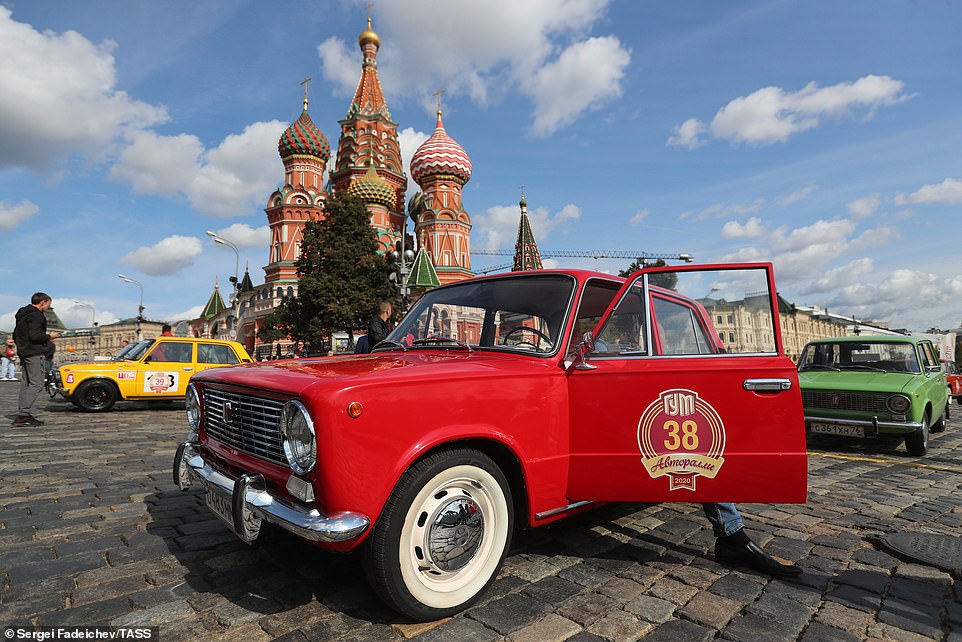 Many of the cars on show at the rally offer a glimpse into Russia’s past (pictured, a  red Lada with a GUM Motor Rally sticker seen in central Moscow) 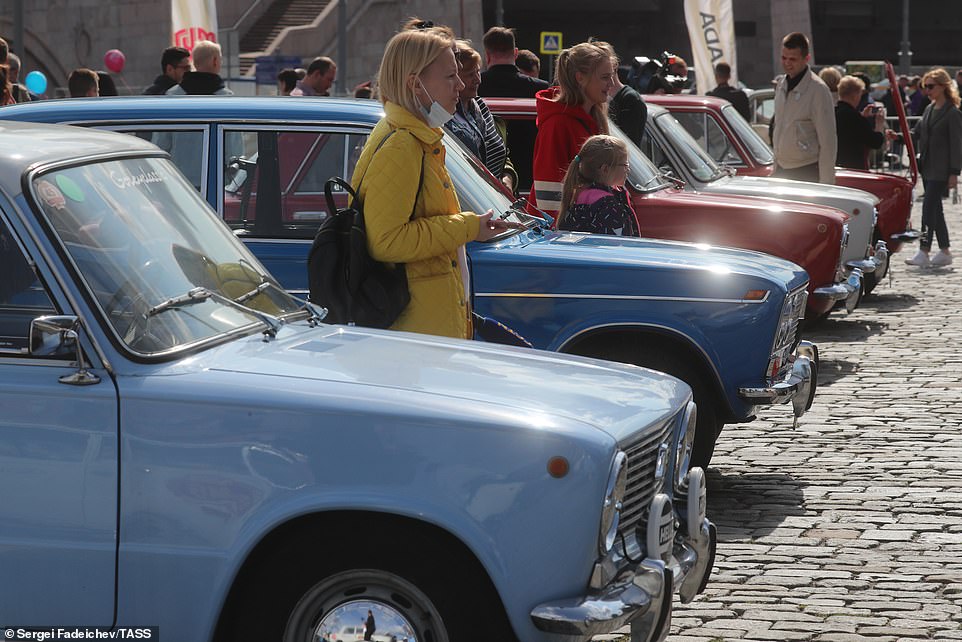 Rows of the vintage cars were parked alongside one another for the rally yesterday, with locals strolling through the area  to study the vehicles 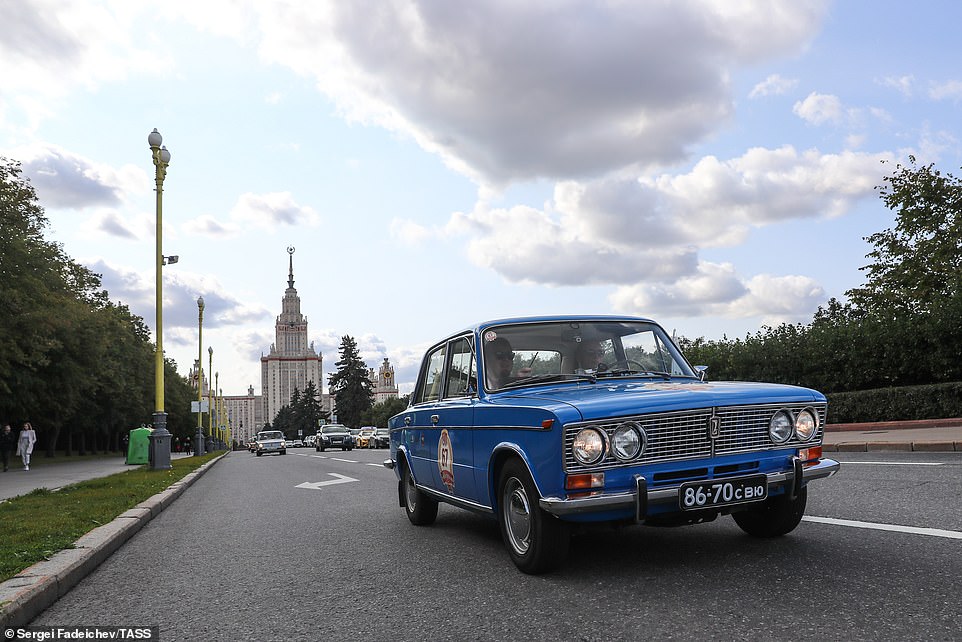 A blue Lada during the rally. The cars were manufactured by AvtoVAZ, a Russian company which is now owned by the French group Renault 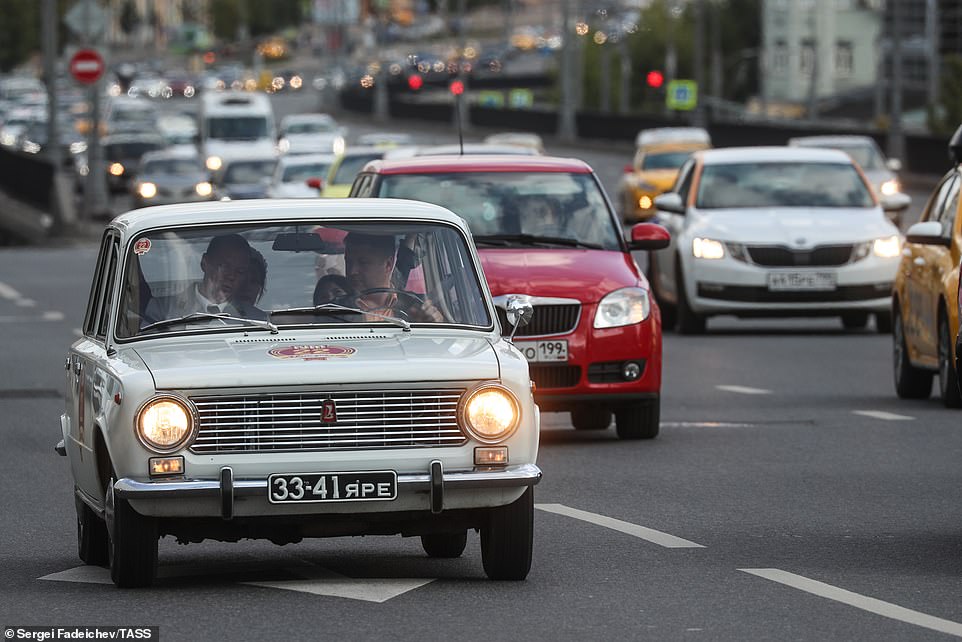 A gray Lada makes it7s way to the rally in the Moscow traffic among modern cars. The cars were meant to be a sturdy version of the Fiat 124 Sedan 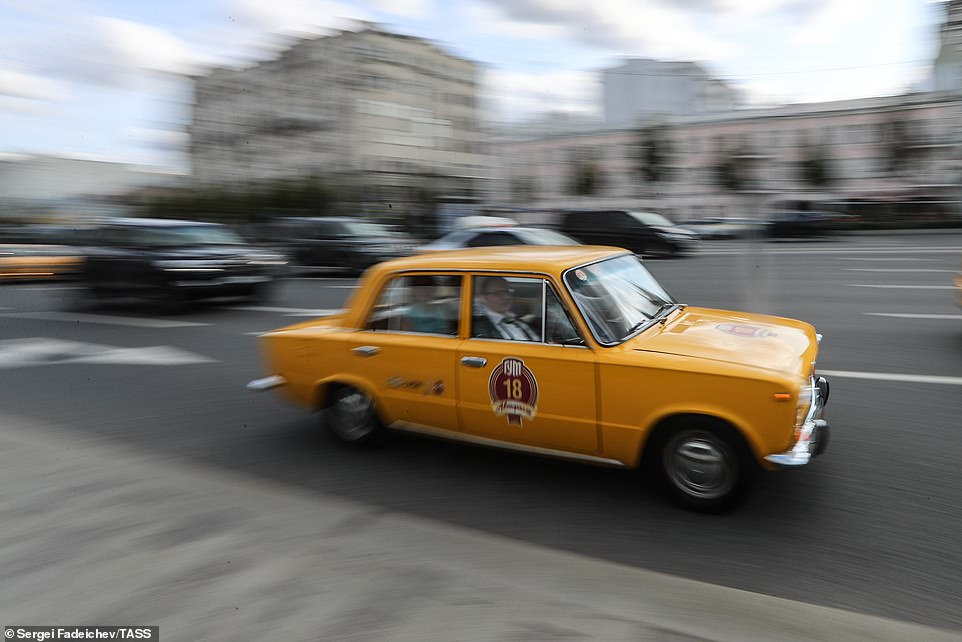 A yellow Lada speeds its way to the rally. The cars were very popular inside the Soviet Union in the 1990s