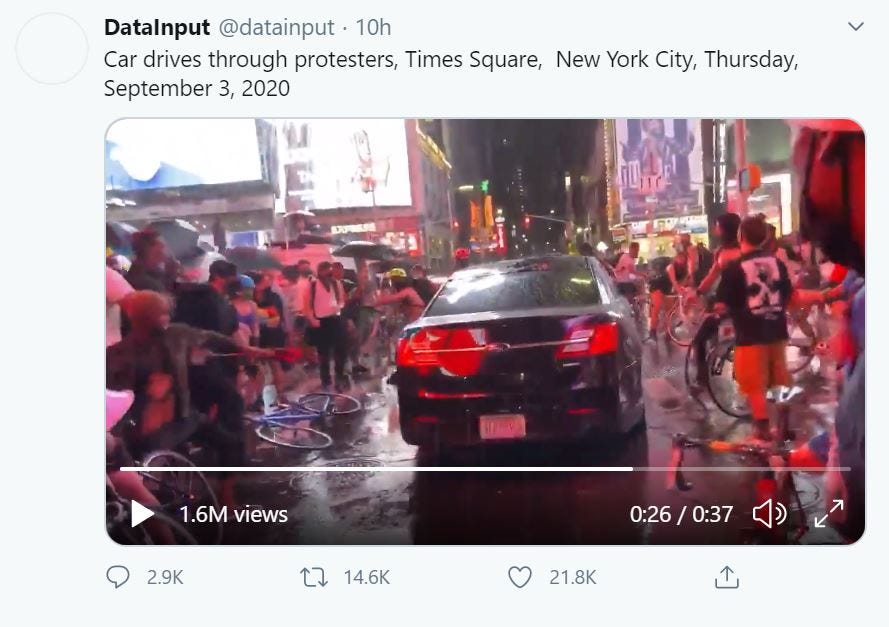 NEW YORK — Police are still searching for a suspect Friday after a car rammed through a crowd of protesters in Times Square during a rainy Thursday evening demonstration.

Video shared on social media around 8 p.m. Thursday showed a black sedan charge through a group of protesters, some with bikes, in a crosswalk in Times Square.

The group had been chanting messages protesting social injustice when a car horn begins to blare and the sedan comes into frame. The car stops in front of two cyclists then plows ahead as the crowd chases after it.

“It’s unclear at this point who is responsible,” Antonetti said.

In a tweet Thursday, police said the car involved was not an NYPD vehicle as some social media users said they believed it looked like an unmarked police car.

Antonetti said there were no injuries, though some social media users who tweeted video from the scene said a few minor injuries occurred. NYPD said on Twitter on Thursday that there were no complaints and that anyone who was injured should come forward.

Keith Powers, a New York City council member who represents a district that includes Times Square, tweeted that his office was looking into the incident.

“Using a vehicle to hurt peaceful protestors is unacceptable and must be stopped,” Powers tweeted.

In a disturbing trend amid recent protests against racial injustice, dozens of vehicles have rammed into demonstrations across the United States this summer. In one incident, it was two NYPD vehicles that rammed into a crowd.

The protests Thursday in Times Square were calling for justice for Daniel Prude, a Black man who died from asphyxia during an incident with Rochester, New York, police in March.

Seven police officers involved in the Prude’s death were suspended Thursday after new details came to light this week about what occurred the night Prude died.

Prude, whose death has been ruled a homicide, was pinned to the ground as police restrained him, and officers also placed a “spit hood” over his head.

The incident occurred two months before the death of George Floyd, a Black man killed when a white police officer dug his knee into Floyd’s neck for over eight minutes. Floyd’s death sparked massive unrest across the country as protesters repeated calls for changes to police departments and racial justice.