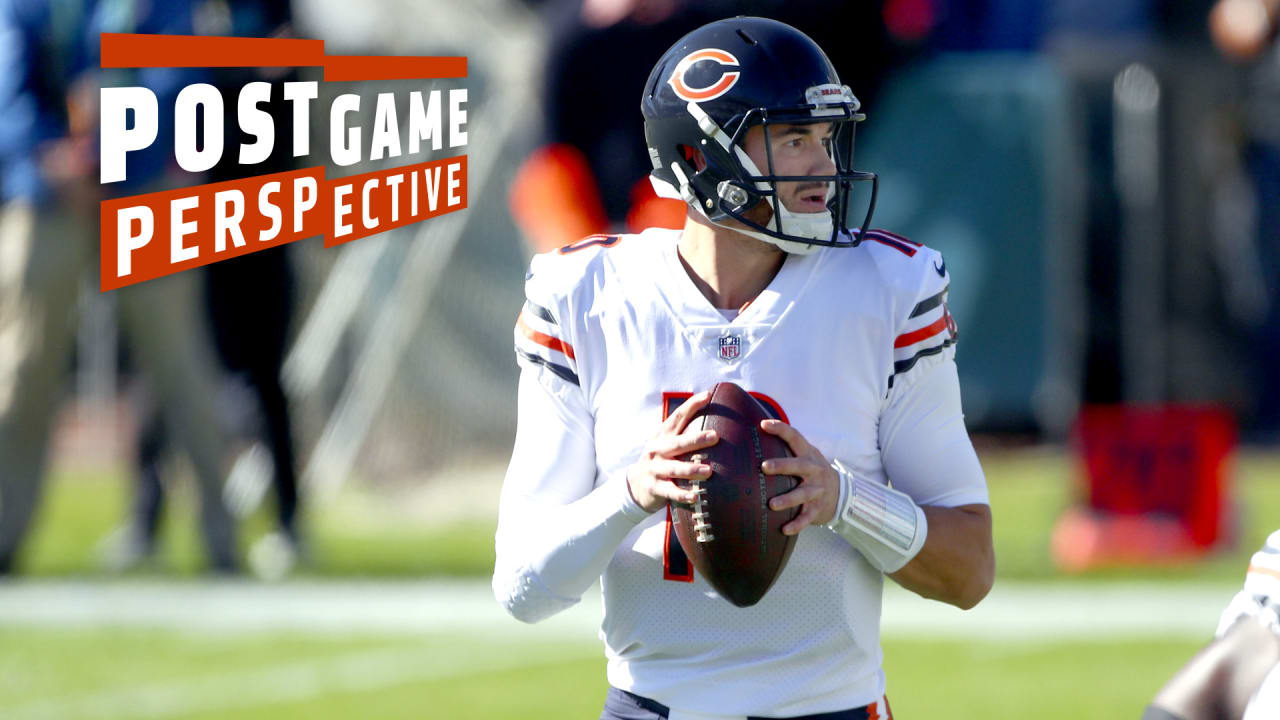 Trubisky completed 24 of 35 passes for 265 yards, two touchdowns and one interception. He threw the 64th touchdown of his career, putting him in fifth place all-time for the franchise. Since Nagy’s arrival in 2018, Trubisky has a 25-12 record as the Bears’ starting quarterback.

The offense has maintained the balanced philosophy it created five weeks ago when Trubisky returned to his starting role.

“We get the gameplan to where he feels really good,” said Nagy. “Now what happens is schematically with the stuff we’re doing—which is obviously different than what we’ve been doing—he feels comfortable, we feel comfortable with it. We have great weeks of practice. We keep defenses kind of on their heels.”

Trubisky made plays with his feet, extending plays and recording his first rushing touchdown of the season in the third quarter. However, his running ability became a double-edged sword on the throw that would mark the lone blemish on his game: a second-quarter interception in the end zone.

At the end of a 68-yard drive with first-and-10 at the Jaguars’ 13-yard line, Trubisky extended a broken play with his legs. He saw receiver Allen Robinson II with his hand up in the end zone and that the defensive back covering Robinson had fallen down.

Trubisky fired what he hoped would be a 50-50 ball, which instead arrived in a crowded end zone. Jaguars linebacker Joe Schobert intercepted the pass.

“It was frustrating because I knew right away I made a bad decision trying to do too much extending a play,” said Trubisky. “Probably just throw that one away or tuck it and run upfield and get some yards. So, I frustrated myself in just making a decision like that.”

The interception was mitigated by a Roquan Smith interception shortly after, setting up a Cairo Santos field goal right before halftime. Nagy did not see any need to berate Trubisky about the play in the locker room.

“Next-play mentality,” said Nagy. “That’s it. That’s literally what we talked about. Forget it. Next play. Are you upset or angry about it? Yeah. We all are. But we learn from it, move on, don’t even think about it. We go into halftime and figure out what the hell we’re going to do on offense, and we score points and keep this mojo going. That’s exactly what he did.”

The big takeaway for Trubisky was that he needed to continue to stay within the offense and himself.

“I just talked to [quarterback coach John DeFilippo] on the sideline,” said Trubisky. “He got me right. I was able to lock back in, make some adjustments at halftime so we could come out and have a big third quarter. But that’s exactly what it was: next-play mentality.”

The third quarter shifted the game from a closer-than-expected contest into the outright blowout the Bears needed. Trubisky said the halftime conversation was simple and to the point: go out and play like the team that had scored at least 30 points in each of the last three games.

“I thought we cleaned it up in the second half,” said Trubisky. “It was just some self-inflicted stuff in the second quarter, but we made those adjustments at halftime, came out and was playing fast in the third and fourth quarters. Good teams make adjustments, and they know when to self-correct and when to get on each other and just communicate.”

A recent emphasis for Trubisky has been communication in the huddle. On the third quarter’s opening drive, the offense faced a fourth-and-five at the Jaguars’ 36. In a season defined by third-quarter futility, the upcoming play had the potential to change the game.

Trubisky reiterated the down and distance when he told the team the play in the huddle.

“Obviously, everybody knows that,” said Trubisky, “but I think me saying that gets everyone locked in, everyone is listening to the play, we go out there, we’re believing in the call and then we just go out there and execute it. They gave us a good look, they brought a little pressure, I just faded to the left, and A-Rob beat the guy up on a nice slant route, and it worked out for us.”

The rest of the quarter seemed to come easy for the Bears. Trubisky scored on a six-yard run. Running back David Montgomery scored from six yards out on the next drive.

Trubisky capped off the quarter by hitting Jimmy Graham deep on a double-move that tripped up his defender. The 22-yard pass was Graham’ second touchdown reception of the day.

Focus now shifts to the Bears’ final game of the season, a matchup against the Green Bay Packers that could determine whether the Bears will make the playoffs.

“It’s going to be huge,” said Trubisky. “We know what’s at stake this weekend. We’re going to enjoy the win tonight and then start preparation tomorrow. It just sets up for an opportunity to finish up our season strong against a rival like this. It’s a must-win game just like these last couple of games have been. We definitely want to play our best ball and finish strong.”

Trubisky takes comfort in a new mindset of the offense, one which centers around the higher expectation set by the best offensive output since the 2018 season.

The mindset comes from a season of adversity. The offense is full of young players such as center Sam Mustipher, guard Alex Bars and receiver Darnell Mooney, who had to earn their playing time throughout the season. Trubisky had to spend seven weeks on the bench with his future in doubt.

The entire team had to endure a six-game losing streak in which the offense was one the least productive units in the NFL.

“If we just have that mentality and are locked in at practice,” said Trubisky, “and are just demanding of each other while also just having each other’s backs throughout the process, we can continue to keep growing and progressing, and who knows what we can do within this offense?”