The chief constable of West Midlands Police has admitted it took officers 30 minutes to respond to one of the Birmingham stabbings as he defends the 18-hour delay in issuing CCTV of a suspect.

Jacob Billington, 23, was stabbed to death while returning from a night out in Birmingham city centre in the early hours of Sunday, September 6.

One person remains critically ill while six others were injured in a spree that lasted 90 minutes.

West Midlands Police faced criticism over its response time, inability to find the suspect on the night and delay in handing out a description of the suspect sooner.

Today the force’s chief constable, Dave Thompson said: ‘Everybody in the city of Birmingham is stunned by these terrible attacks, the fact that the victims could have been any one of us or any of those we love makes crimes like these seem very, very close to home.’

Addressing the police’s response time, Ch Const Thompson revealed it took officers 30 minutes to arrive on the scene of the second attack, in Livery Street, where a teenager and a woman had been stabbed. 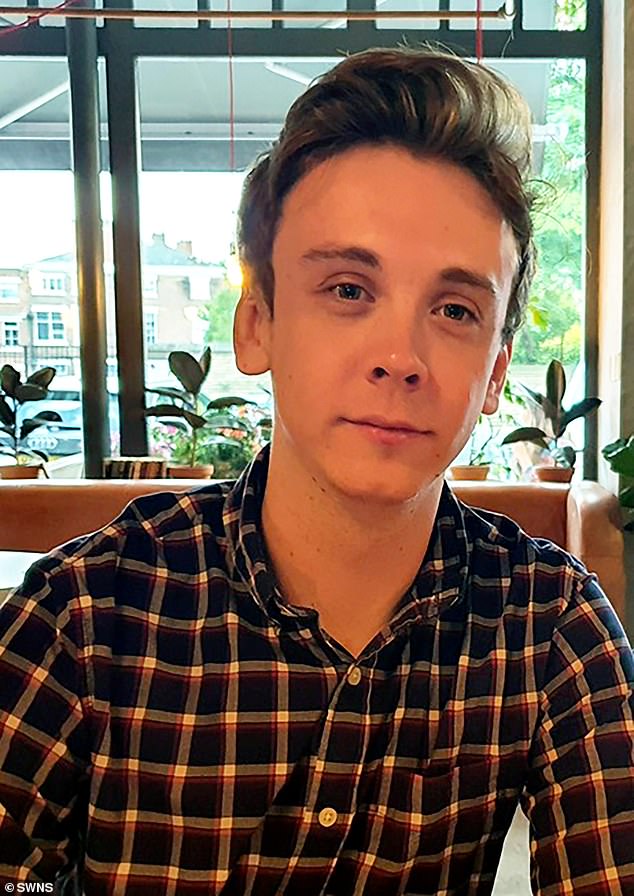 Jacob Billington was killed during the 90-minute stabbing spree. Today West Midlands Police’s Chief Constable David Thompson said everybody in Birmingham was ‘stunned’ by the attacks

Officers arrived at the three other scenes within 11 minutes.

Concerns were also raised that the attack was allowed to carry on for nearly two hours.

Birmingham MP Khalid Mahmood told The Times after the attack: ‘We’ve got to look at the fact he had two hours to run around the city centre, which has a huge amount of CCTV cameras in place.

‘Where was the monitoring? Both the public and police were put at further risk.’

Speaking today, Ch Const Thompson said: ‘There has been some criticism of the force because there’s a belief the suspect was allowed to wander around the city centre of Birmingham for two hours between the first and final attack. 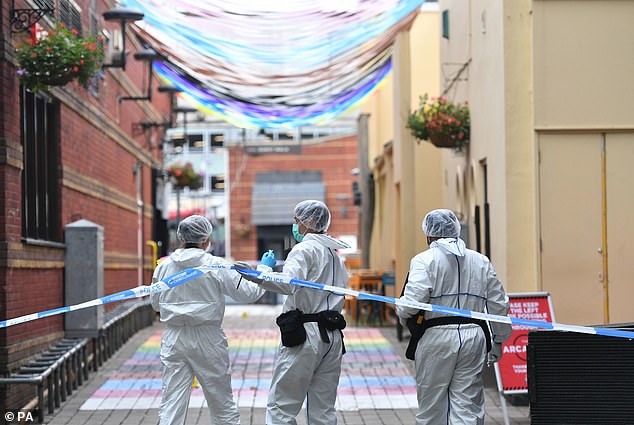 Ch Const David Thompson has defended the police’s response to the attack on September 6, setting out officer response times and saying he is ‘proud,’ of the force’s investigation

‘The first three victims attacked were reported to police between 12.31am and 12.52am on the sixth september,

”At 1.23am the initial investigation identified links between the two incidents, it was then almost an hour’s gap until the next two attacks were reported to police.

‘Evidence presented to the court in this case will allege the suspect left the city centre after the first three victims were attacked, returning to another part of the city centre around an hour later, where it is alleged the second two more incidents took place.

‘This addresses why the prime suspect was not located between the two sets of incidents.

‘As you will know we always try to find suspects immediately after the incident, this is not always possible, as complex cases like this demonstrate.’ 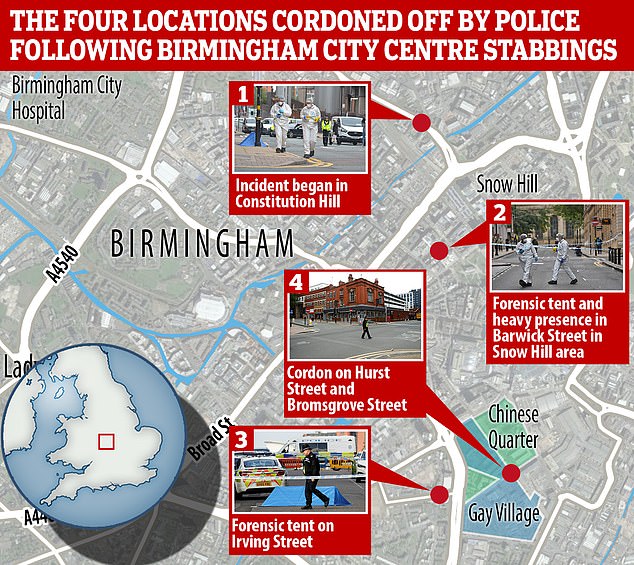 Police responded to most of the incidents within 11 minutes – but officers took 30 minutes to arrive at the second stabbing in Livery Street, near Constitution Hill

Ch Const Thompson said ‘a considerable number of officers’ were sent to the scenes, particularly after the third and fourth incidents.

He told a West Midlands’ Strategic Policing and Crime Board every available officer in the force’s central area was called  of the force as these calls came in.

He added: ‘This was later extended to every available officer in the western and eastern parts of the West Midlands Police area, extracted from Wolverhampton to Coventry.’

The police chief defended the force’s decision to wait until 7pm on Sunday night to issue CCTV images of the suspect. 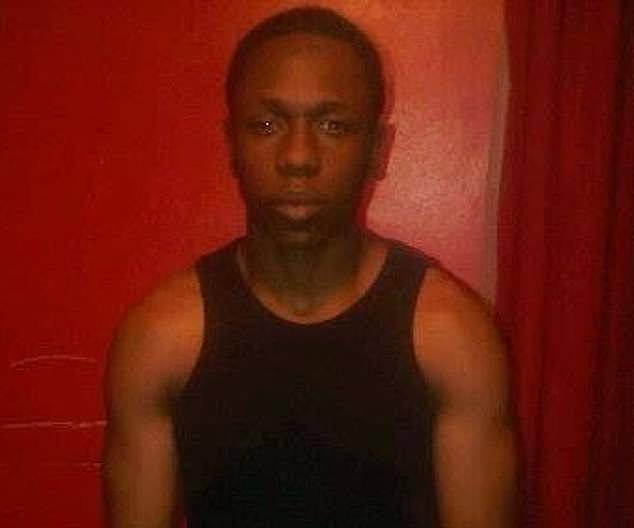 Zephaniah McLeod has been remanded in custody and will stand trial in February 2021, according to a provisional date set last week

He said: ‘In deciding whether to release the details of the suspect, senior officers balanced the risk to the public, the vague nature of the description that we had at that stage and the risk of well-intended but inaccurate reports of sightings alongside what were already active lines of inquiry.

‘This was also influenced by the absence of a good quality CCTV image that would assist identification.

‘We shared images of the suspect at 7pm on the sixth of September. These were the best images secured during the investigation throughout that entire day.

‘They were downloaded from a private CCTV camera system when we secured these images at 5.30pm.

‘The suspect was arrested at 4am on Monday 7 of September, 26 hours after the final attack. 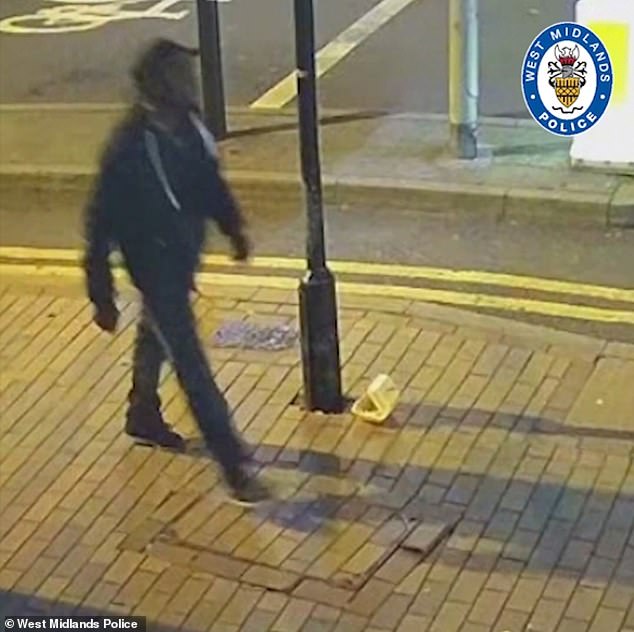 ‘I believe the decisions on releasing details around the suspect to have been well considered, reasonable and ultimately assisted the investigation to reach its conclusions.’

Ch Const Thompson reiterated the attacks were ‘not terror related,’ but revealed the National Counter-Terrorism Police would debrief the incident ‘as policing and our partners seek to refine the joint agency response to marauding attacks’.

He added: ‘We have already carried out an initial debrief, which we will report in due course to the PCC.

‘A separate legal process exists to review the management of the suspect via authorities prior to these incidents.

‘I conclude by saying how proud I am of the response of staff from West Midlands Police on that night and also those carrying out this investigation.

‘Our job is now to secure justice.’ 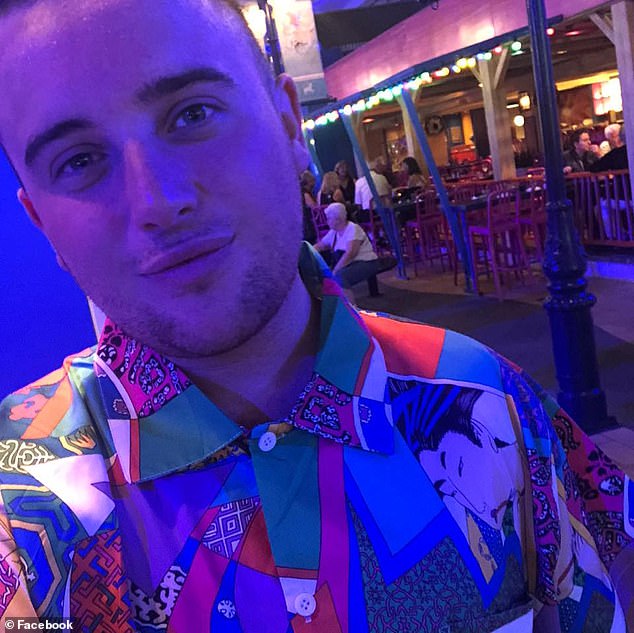 Teacher Rhys Cummings, 24, was among seven people injured during the horrific attacks in Birmingham City Centre in the early hours of Sunday, September 6

Speaking after the chief constable’s statement, West Midlands’ Police and Crime Commissioner, David Jamieson, said: ‘Some of the criticism that was received shortly after the event was seriously uninformed and very unhelpful from people that should actually know better.

‘Perhaps I hope some of those people who made that criticism and some of them were people who were elected to Parliament, they should actually reflect on what they said and revise how they react in future.’

Last Thursday Zephaniah McLeod, 27, appeared at Birmingham Crown Court charged with the murder of 23-year-old Jacob Billington and attempting to kill seven others.

A judge heard allegations that McLeod, 27, did not remain in the city centre throughout the hour-and-a-half rampage, during which five separate incidents unfolded.

West Midlands Police had previously been criticised for alleged delays in responding to the attacks, which the force’s chief constable condemned as ‘ill-informed critique’.

McLeod has been remanded in custody until a hearing next month, with a three-week provisional trial date for February 22 2021.