India and China have agreed that their troops should ‘quickly disengage’ from a tense border standoff that has lasted months.

The two countries’ foreign ministers agreed to maintain proper distance and ease tensions in the Ladakh region where the two nuclear armed nations in June had their deadliest clash in decades.

India’s S. Jaishankar and China’s Wang Yi met in Moscow on Thursday night and concurred that ‘the current situation in the border areas is not in the interest of either side,’ according to a joint statement issued Friday.

Since last week, the Asian giants have accused each other of sending soldiers into rival territory and firing warning shots for the first time in 45 years, threatening a full-scale military conflict.

The foreign ministers did not set any timeline for the disengagement of tens of thousands of soldiers who have been locked in a standoff since May.

They did agree that ‘both sides shall abide by all the existing agreements and protocol on China-India boundary affairs, maintain peace and tranquility in the border areas and avoid any action that could escalate matters.’

The disputed 3,500-kilometer (2,175-mile) border separates Chinese and Indian-held territories from Ladakh in the west to India’s eastern state of Arunachal Pradesh, which China claims in its entirety. 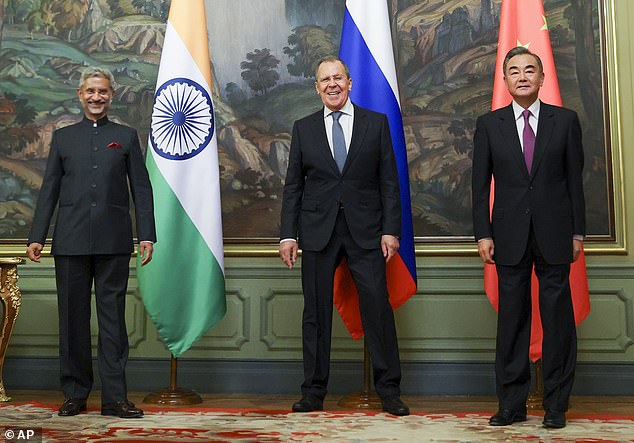 The current standoff is over portions of a pristine landscape that boasts the world’s highest landing strip and a glacier that feeds one of the largest irrigation systems in the world.

Both sides accuse the other of provocative behavior including crossing into each other’s territory, and both have vowed to protect their territorial integrity.

Earlier this week, Jaishankar described the situation along their shared boundary, known as the Line of Actual Control, as ‘very serious’ and said the state of the border cannot be separated from the state of the bilateral relationship.

On Thursday, the two countries agreed that as the situation eases, they should expedite work to conclude ‘new confidence-building measures to maintain and enhance peace and tranquility in the border areas.’

In a separate statement, Wang said ‘China-India relations have once again come to a crossroads.’

That statement said Wang ‘outlined China’s stern position on the situation in the border areas, emphasizing that the imperative is to immediately stop provocations such as firing and other dangerous actions that violate the commitments made by the two sides.’

‘It is also important to move back all personnel and equipment that have trespassed. The frontier troops must quickly disengage so that the situation may de-escalate,’ it quoted Wang as saying.

India did not release a statement of its own, but an official with the External Affairs Ministry said Jaishankar told Wang that India expected full adherence to all agreements on management of border areas and would not support any attempt to change the status quo unilaterally. 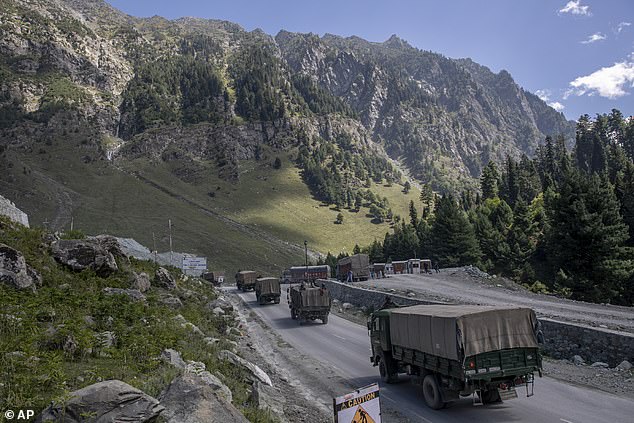 An Indian army convoy moves on the Srinagar- Ladakh highway at Gagangeer, northeast of Srinagar, Indian-controlled Kashmir, Wednesday. Tensions have been mounting between the nuclear armed nations since a melee between troops ended with 20 Indian soldiers killed 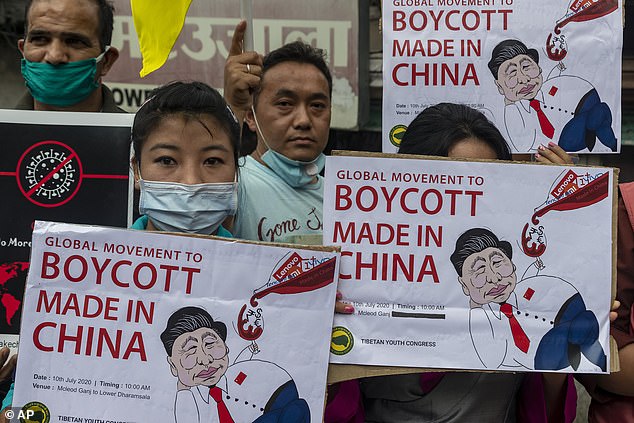 Members of the Tibetan Youth Congress participate in a July street protest calling for the boycott of Chinese goods in Dharmsala, India, amid mounting tensions between the nations. India’s economy relies heavily on Chinese goods, which have faced a backlash

The official said Jaishankar said the immediate task is to ensure a comprehensive disengagement of troops at all flash points to prevent any incidents, with details of how that is to be done worked out by military commanders. The official was not authorized to speak publicly and spoke on condition of anonymity.

The two ministers met in Moscow on the sidelines of a gathering of the foreign ministers of the Shanghai Cooperation Organization. The group comprises China, India, Pakistan, Russia, Kazakhstan, Krgyzstan, Tajikistan and Uzbekistan.

On Friday, Wang held talks with Russia’s foreign minister in Moscow and later told reporters that India had expressed a wish to ease tensions through diplomatic and political channels.

Wang said the top priority now is to not break past agreements, including one not to open fire at the border. 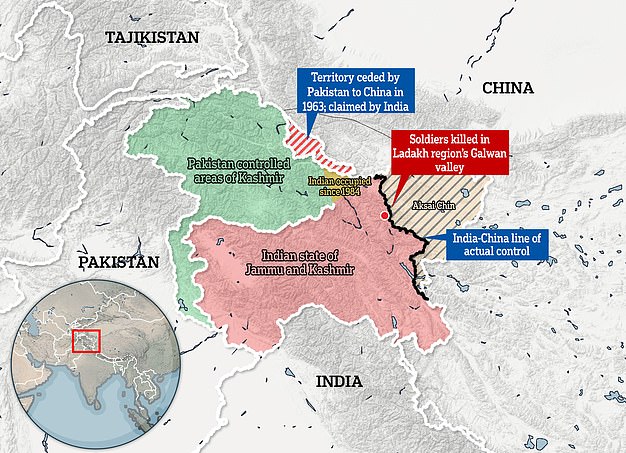 At least 20 Indian soldiers, including a colonel, were killed in June during a mass brawl at the border, which reportedly involved clubs. Officially no shots have been fired in the area since 1975 when four Indian troops were killed in an ambush 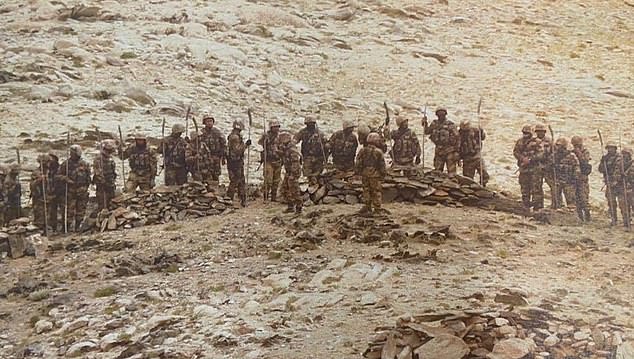 Armed with spears: Chinese troops near the disputed Himalayan border with India earlier this week where gunfire is banned but soldiers fought in deadly hand-to-hand  combat in June

‘Also, we should withdraw the personnel and equipment completely from the front line. In this way, we can implement the consensus and restore peace and stability along the border,’ he said.

Russian Foreign Minister Sergey Lavrov said he was very pleased that the Moscow venue enabled the foreign ministers of China and India to have a substantive meeting on deescalating their border tensions.

In India, Vinod Bhatia, a retired Indian army general, said resolving the ongoing impasse will be a long process.

‘Disengagement is the first and the most important step that will guide the de-escalation process. The two armies will work out a mutually acceptable methodology for de-escalation,’ Bhatia said.

He said ‘there is a political will and direction now to resolve the crisis.’ 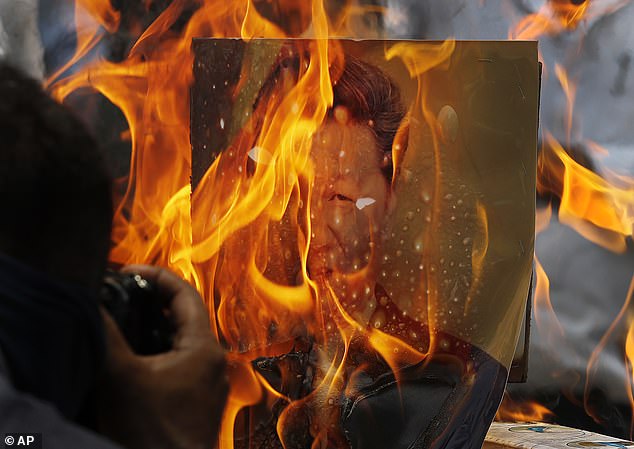 Indian traders burn Chinese products and a poster of China’s president Xi Jinping during a protest in New Delhi, India. Since last week, the Asian giants have accused each other of sending soldiers into rival territory and firing warning shots for the first time in 45 years 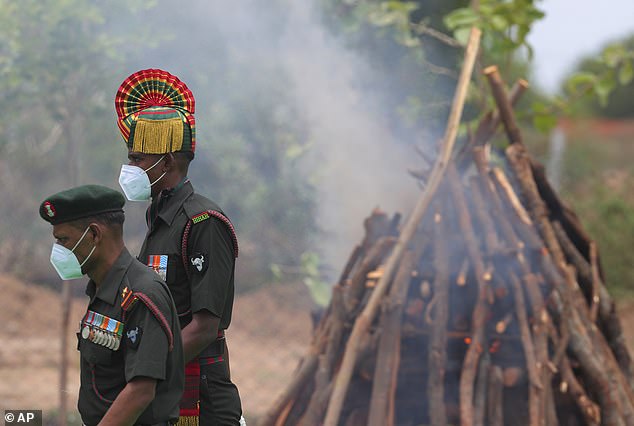 Indian army officers walk past the pyre of their colleague Colonel B. Santosh Babu, who was killed during a clash with Chinese soldiers in Ladakh region

The two nations fought a border war in 1962 that spilled into Ladakh and ended in an uneasy truce. Since then, troops have guarded the undefined border area, occasionally brawling. They have agreed not to attack each other with firearms.

Rival soldiers brawled in May and June with clubs, stones and their fists. A clash on a high ridge on June 15 left 20 Indian soldiers dead. China reported no casualties.

After that clash, both sides disengaged from the site in Galwan valley and at least two other places, but the crisis continued.

On Tuesday, Chinese troops were seen lined up with spears on the Himalayan border with India.

Indian soldiers responded with warning shots after China’s forces gathered menacingly with ‘rods, spears and sharp weapons’ on the disputed border between the nuclear-armed rivals.

The Chinese troops were ‘expecting close combat with the Indian Army soldiers’, Indian media suggested – raising fears of a repeat of the deadly clash in June.

China also allegedly fired warning shots in what Beijing called the first exchange of gunfire along the frontier for 45 years, which both sides blamed on each other.

Officially no shots have been fired in the area since 1975 when four Indian troops were killed in an ambush.

The Himalayan border between India and China has been disputed for centuries, but the two countries have been fighting over it most recently since the 1960s.

In the 18th century it was fought over by the Russian, Chinese and British empires, and after India gained independence ownership of the region became more confused.

China values the region because it provides a trading route to Pakistan, and recent hostilities have been sparked by fears in Beijing that India will cut it off from the crucial overland corridor.

The current official border between the two was set by Britain and is known as the McMahon line. It is recognised by India but not by China.

In reality, the border between the two countries is on Line of Actual Control (LAC) where Indian and Chinese forces finished after the Sino-Indian War of 1962.

Aksai Chin, the site of the latest tensions, is located in India according to the official border but is claimed as part of the Chinese region of Xinjiang by Beijing.

It is an almost uninhabited high-altitude scrubland traversed by the Xinjiang-Tibet Highway.

The other disputed territory is hundreds of miles away to the east of Tibet.

The 1962 Sino-Indian War was fought on these two frontiers as Indian Prime Minister Jawaharlal Nehru put it, a struggle over land where ‘not even a blade of grass grows.’

In addition to the disputed border, China had seized Tibet ten years before and accused India of trying to to subvert Beijing’s interests by granting asylum to the Dalai Lama.

There was also a Cold War element and India wanted to see if the US would back it in a confrontation against communist China.

Delhi had ignored the desolate corner of the subcontinent which allowed the Chinese to build a military road through it during the 1950s to connect the province of Xinjiang to Tibet.

The Indian discovery of this highway was a major factor which led to ferocious clashes leading up to the war.

Yet the Indians had just two divisions posted at the border when the Chinese invaded, never suspecting that Beijing would be so bold as to cross the McMahon Line.

The war lasted for one month and left more than 2,000 dead on both sides. It was a heavy defeat for India and led to the new border, the LAC, being established and pushing India back from McMahon line.

Much of the reason for the ongoing conflict is the ill-defined border, the result of a confused status the region had during the colonial era, which was made more murky by India’s war with Pakistan in 1947.

Beijing fears that increased Indian presence in the region will cut off its trade route to Pakistan.

The two sides have blamed each other for recent hostilities but analysts say India’s building of new roads in the region may have been the fuse for May’s standoff.

Both sides have dispatched reinforcements and heavy equipment to the zone.