Google is working on a Phone Hub similar to Microsoft Your Phone that will make your handset interact better with your Chromebook, but the company isn’t ready to bring the feature to stable just yet. In the latest release of Chrome OS, version 85, the company instead focuses on many little things that make for an overall better experience: Wi-Fi password sync, improved settings search, and a volume slider for your microphone.

Wi-Fi Sync is something we have been asking for for a long time, and Apple has been offering it in its ecosystem since what feels like forever. The feature will create a keychain in your Google account where Wi-Fi credentials are stored securely, making it easy to log in when you use a new Chromebook.

Judging from Google’s support page on the topic, this keychain appears to be a separate entity from Wi-Fi credentials saved to your Android phones. At least that still means that you won’t have to re-enter as many Wi-Fi passwords as you used to upon switching, but universal sync would have been much better. You can turn Wi-Fi Sync on in Settings -> People -> Sync and Google services -> Manage what you sync. If you sync everything, you should be all set once you update to Chrome OS 85.

Settings has gained a revised search design that’s been part of the beta channel for a while. The new pill-shaped bar gives you auto-complete suggestions in a drop-down, which might be useful when you’re not 100% sure what you’re looking for. Google says it’s intelligent enough to suggest things that don’t match your query letter by letter.

With people working from home all over the world, Google decided that it should be easier to adjust your microphone volume. You’ll find a new option for that in the Quick Settings panel, hidden behind an arrow next to the regular volume slider.

Google has also enhanced the camera app with some more video features you probably know from your Android phone. It’s now possible to pause and resume recordings, and you can take stills through a new shutter button while recording.

Chrome Unboxed also spotted a new Print Jobs system app that will show you your active and past print jobs. It makes it easy to cancel printing jobs and should help you troubleshoot the usual printing woes. 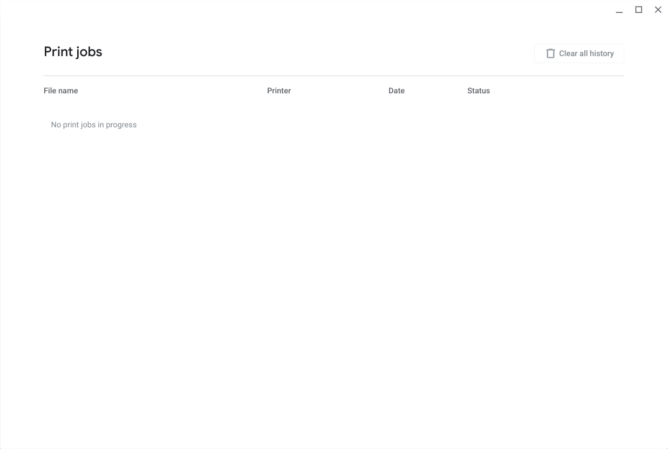 Unfortunately, we’ll still have to wait for some more exciting features. Nearby Share and the Phone Hub will probably only make it to the stable release sometime later. As always, the Chrome OS update is rolling out in stages, so it might take some time until it hits your device. You can check if you’re already eligible by heading to Settings -> About Chrome OS -> Check for updates. Following the update, you should also get access to the new features introduced with Chrome 85.