Outgoing Counselor to the President Kellyanne Conway predicted that President Donald Trump‘s ‘hidden undercover’ supporters would propel him to victory again – and he’d be topping the polls a week after the conventions.

‘I’ve gotta tell you, as the person who coined the term “hidden undercover Trump voter” in 2016, there are even more of them and they are even more committed now and they are going to surprise you to who they are this time,’ Conway said in an interview for Showtime’s ‘The Circus.’

Conway was sitting down with Jennifer Palmieri, who worked in President Barack Obama‘s White House before moving to Hillary Clinton‘s 2016 presidential campaign – a campaign that Conway beat, as Trump’s 2016 campaign manager. 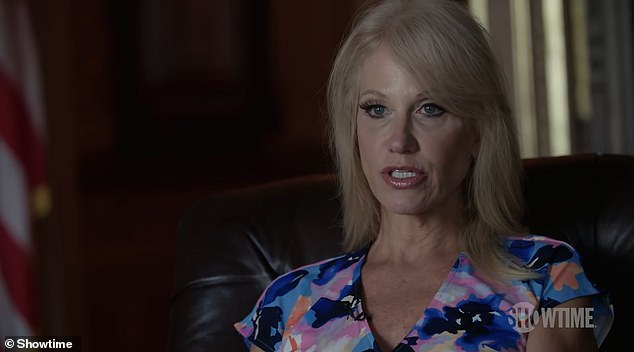 Outgoing Counselor to the President Kellyanne Conway predicted that President Donald Trump would again win the White House thanks to her so-called ‘hidden undercover Trump voters.’ She also believed Trump would be ahead of Democrat Joe Biden in the polls one week after the conventions 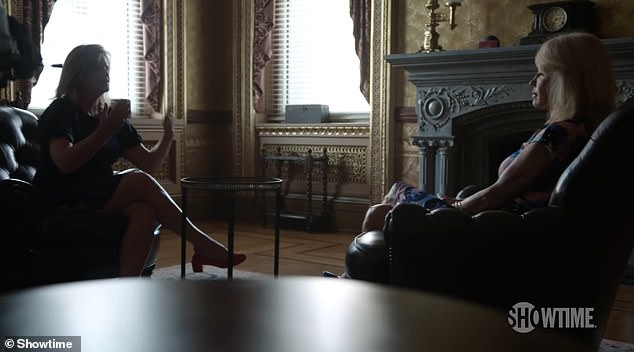 Conway (right) sat down for an interview for Showtime’s ‘The Circus’ with Jennifer Palmieri (left), who worked for the Obama White House before moving over to Hillary Clinton’s 2016 campaign 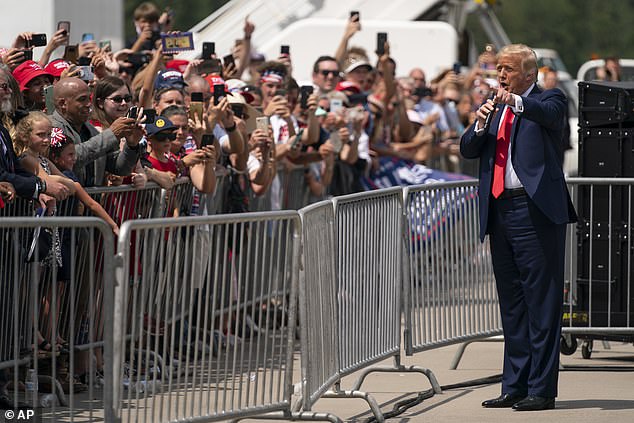 Conway said  Trump ‘turned around’ how Americans viewed his handling of the coronavirus after he told people to wear masks and cancelled rallies. He’s seldomly worn a mask and has held events where crowds haven’t socially distanced, like in Wilmington, North Carolina Wednesday

‘Most people in this country see themselves as an outsider to the system. And that is still who Donald J. Trump is,’ Conway said.

Conway explained that Trump can still take on that mantle because ‘Democrats really screwed up their nomination process’ by picking Joe Biden, who’s been in national politics since 1972.

Democrats ‘did not vote for somebody who would suggest forward-looking, visionary, new generation change, if you will.’

‘It allows President Trump to remain and run for re-election as the “incumbent outsider,”‘ Conway said.

Conway also said she believed Democrats already thought they had the election locked up.

‘I think it all turned around five or six weeks ago,’ Conway said, specifically talking about how Trump was rated in his handling of the pandemic, as she chided Democrats for using the crisis politicially. ‘For some reason, cynically, the Democrats think they can win an election based on a once-in-a century tragedy that swept the nation,’ she said.

Conway said Trump turned the ship around when he said, and then tweeted, that Americans should wear masks.

‘He also resumed the coronavirus briefings,’ Conway continued. ‘I said to him the briefings should be succinct and they should be technical briefings.’

‘And the other thing he did that week is he said he’s pulling down his live convention and I’m not going to do these big rallies. And that’s the president saying, “what’s good for thee is good for me,”‘ she went on. ‘So that’s called leadership.’

The president did briefly encourage mask-wearing, but has seldomly worn a mask to prevent the spread of the coronavirus. He’s also held a number of events, including inviting 1,500 people to the White House South Lawn for his Republican National Convention speech, where social distancing protocols weren’t practiced and few people wore face coverings.

That was the scene Wednesday, when he landed in Wilmington, North Carolina and briefly addressed supporters.

On Thursday he’s headed to Latrobe, Pennsylvania for what the campaign isn’t calling a rally – instead it’s described as the president ‘deliver[ing] remarks’ – but will still be a large gathering.

‘The Democrats thought they had this all sewed up two months ago, the media were like I’m going to Nantucket and Martha’s Vineyard and the Hamptons, we’re all suddenly like holy crap this guy’s coming back,’ Conway said.

She pointed to a poll – likely the July survey from the right-leaning Cato Institute –  that found 62 per cent of Americans are afraid to express their political views due to the current climate.

‘But they express themselves at the ballot box,’ she said.

She also defended the president’s mostly white voter base.

‘I always feel a fire in my belly and bile in my throat when people who are the way I grew up are mocked and ridiculed as either irredeemable or deplorable or looked down upon because they go to church or they own a firearm, Conway said.

But even if the ‘hidden undercover’ Trump voters don’t express themselves to pollsters, Conway predicted the president would be up in polls by today.

‘A week after the conventions the president will be way ahead,’ she said.

So far, that hasn’t fully materialized.

Every poll that came out Wednesday showed Biden ahead, including nine different national polls and polls from four swing states including Pennsylvania, where Trump will travel Thursday, Wisconsin, Arizona and North Carolina.

A tracking poll that was released Monday found that Trump received no bounce from the RNC last week.