A police officer accused of choking an unmasked woman in a dramatic Melbourne arrest that went viral on social media has been cleared.

A 21-year-old woman from St Kilda became involved in a violent altercation on August 12 when police approached her in Collingwood for not wearing a mask.

Footage emerged of a male officer placing his hands around the woman’s neck during the arrest as she yelled for him to get off. 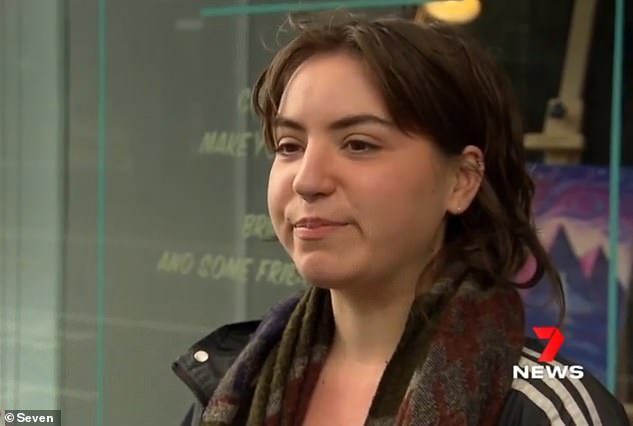 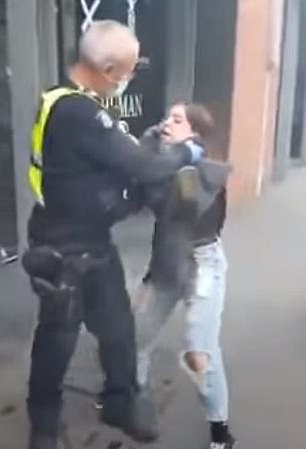 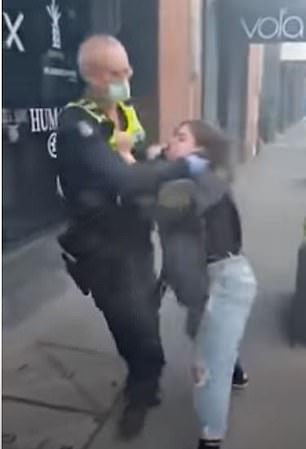 She was seen speaking with a male police officer without a mask, but the confrontation quickly turned violent when the officer appeared to place his hands around her neck, clearly visible because of his lilac latex gloves.

The female officer can be heard telling the woman to let go of the officer’s vest in a clip filmed by another onlooker and he keeps his grip around her neck.

The woman then lashed out at the female officer, kicking her in the chest, before being tackled to the ground.

The male officer pushes her against the wall and the woman removes her hands from his vest and punches him in the chest.

The male officer then pulls her to the ground to arrest her as another clip shows him sitting on top of her as he waits for backup to arrive. 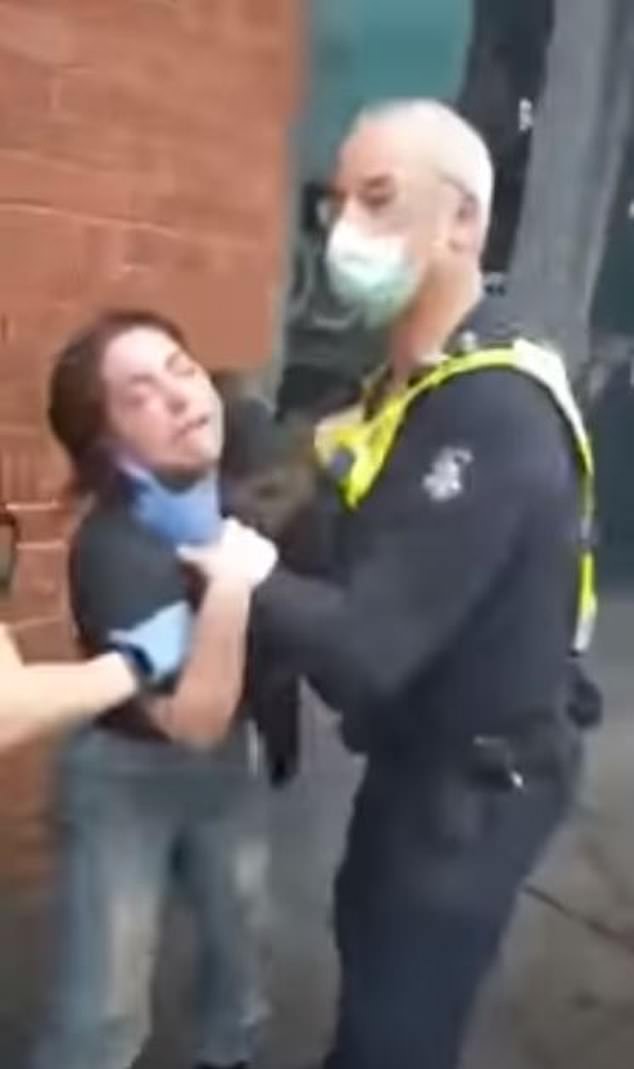 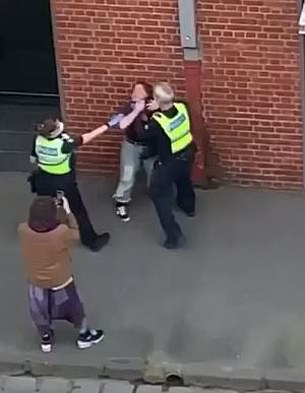 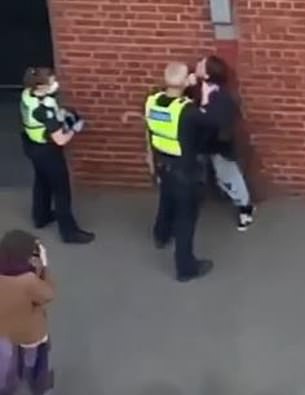 A female officer appears to try to speak to the woman as the male officer keeps his grip around her neck (pictured, left and right)

The woman can be seen struggling, with her feet flapping against the footpath as she questions what she is being arrested for.

A friend then starts filming the arrest, telling the officer the woman has an exemption for wearing a mask.

As she was led away to a police van, a male filming the arrest said: ‘She’s got a note from the doctor. Youse are f***ed’.

Victoria Police later confirmed she had an exemption for disobeying coronavirus health requirements to wear a mask, having earlier refused to provide her name and address. 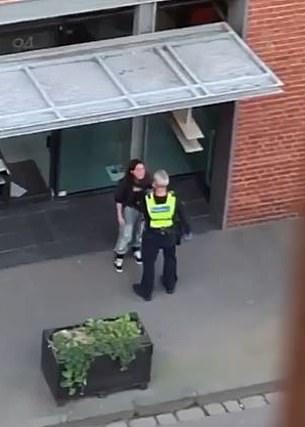 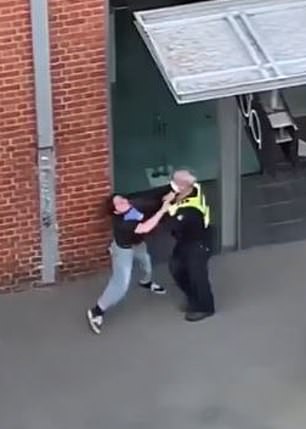 The video, which was captured by an onlooker in an apartment building in Melbourne, begins with the male officer speaking to the red headed girl in baggy jeans (pictured, left and right)

She was later charged with resisting arrest and assaulting police, but was not fined for failing to wear a mask because of the exemption.

The arrest was referred to Victoria Police’s professional standards command for oversight, and a spokeswoman confirmed that it had been debriefed internally.

‘No further action will be taken,’ a statement said on Monday.

The woman told 7News she gave officers the finger when they asked her why she wasn’t wearing a face covering, but claimed their response was excessive. 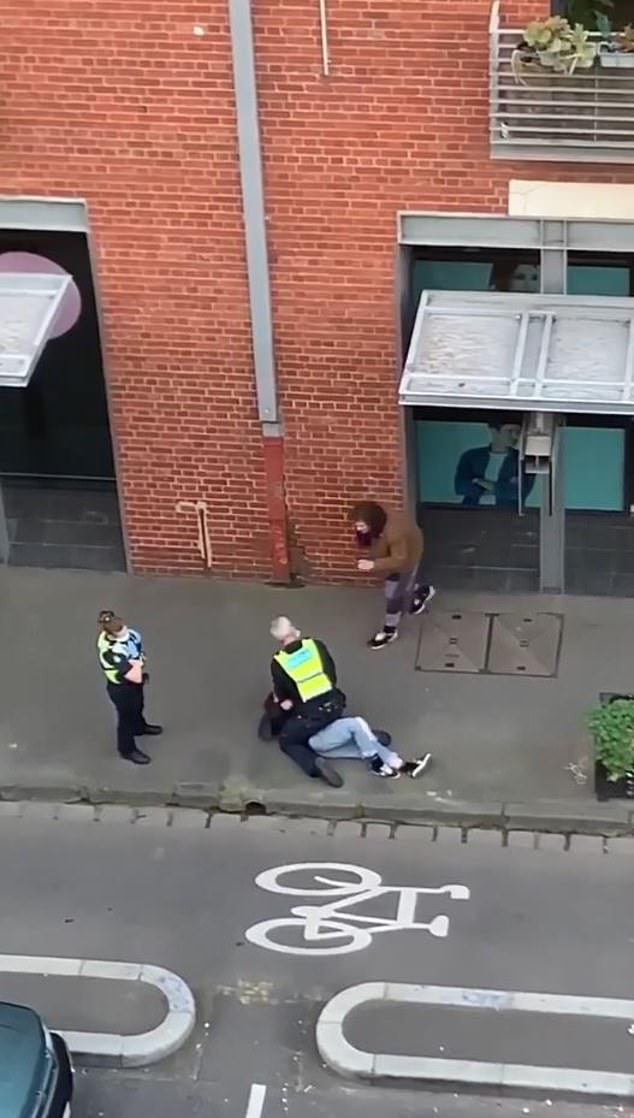 The man in the purple scarf then yells for the officer to get off her, saying she has an excuse for not wearing a mask