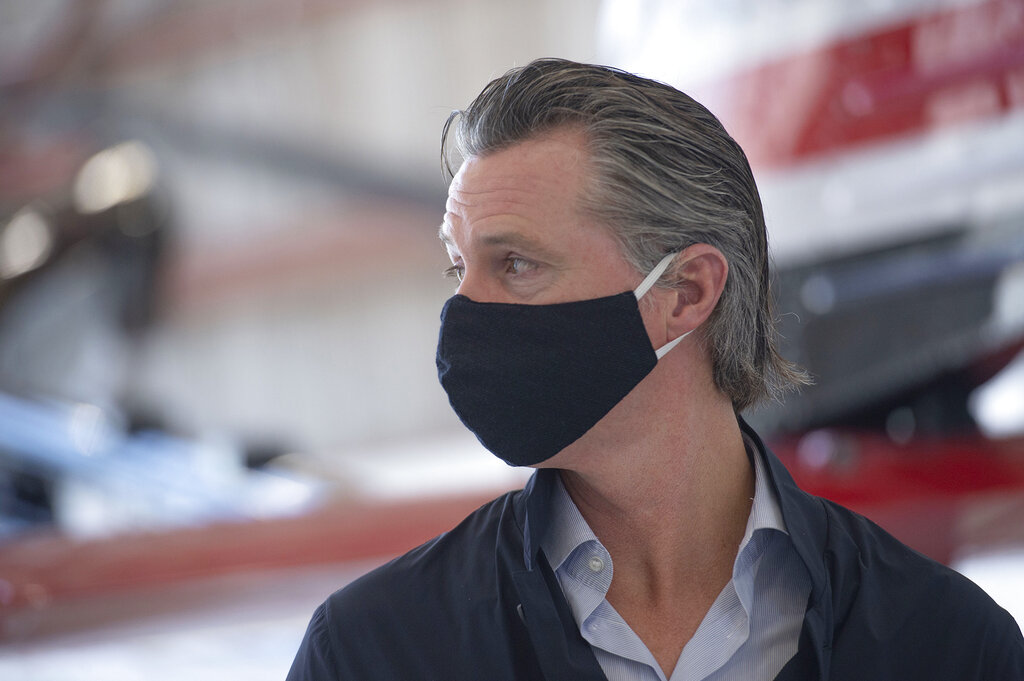 The state loosened coronavirus restrictions Tuesday on Santa Clara and Santa Cruz counties, clearing the way for more businesses to reopen and, if infection rates remain stable, even schools in the next few weeks.

The state moved the two counties — along with Amador, Orange and Placer counties — from the most-restrictive purple tier to the red tier in California’s new COVID-19 monitoring system, meaning the counties have met benchmarks for new cases and positive testing rates. The upgrade marks the first group of counties to move forward on the Golden State’s path to reopening and comes amid positive trends in the fight against the deadly disease.

In the red tier, counties can allow more businesses, like gyms, to begin to operate indoors and businesses that were already allowed to serve customers indoors, such as retail, can increase the number of customers they serve at once.

Santa Clara said it would allow personal care services like massages and manicures to begin indoors with modifications, along with museums, zoos, aquariums, gyms and fitness centers. It said shopping malls would be allowed to increase capacity from 25% to 50%.

Santa Cruz will also allow restaurants, places of worship and even movie theaters to resume indoor operations at limited capacity and with requirements like mask wearing and social distancing. Santa Clara is still holding off on reopening those businesses and houses of worship.

Counties can implement stricter rules than the state. San Francisco, in the red tier, has not permitted indoor salon operations — as House Speaker Nancy Pelosi discovered last week after being caught on camera getting her hair done inside a shuttered salon — despite the fact that the state’s tier system permits them.

“Although moving to the Red Tier is a step in the right direction, the community should be aware that another surge in COVID-19 cases is anticipated,” Santa Cruz County spokeswoman Corinne Hyland said in a statement. “Evacuations due to the CZU Lightning Complex Fires resulted in many people mixing with others from outside their household.”

The state credited Santa Clara County for its widespread testing: The county is now conducting between 7,000-8,000 coronavirus tests per day.

“If we hadn’t had these numbers in testing, we wouldn’t have been able to move from purple to red and we would still be in a much more restrictive situation,” said Marty Fenstersheib, the head of the county’s testing task force. “As long as we can maintain our levels of testing, we’ll be able to adjust our case rates and stay in the less restrictive tiers and eventually hopefully we’ll move into even less restrictive tiers.”

Maya Mansour, the owner of The Original Facial Bar in San Jose and Cupertino, is hoping that happens fast. Santa Clara County says that facials are still too risky.

If counties stay in the red tier for two weeks, they can reopen K-12 schools — although some districts are wary. Right now, only elementary schools with a waiver can reopen.

“We don’t feel like the schools should do something completely different from the rest of the businesses in the community,” San Jose Unified School District spokeswoman Jennifer Maddox said, pointing to the county’s ban on indoor gatherings.

Evergreen School District Superintendent Emy Flores said her team won’t consider returning for in-person instruction until after winter break. And many Santa Cruz County districts affected by the recent fires are also holding off on in-person learning while schools are cleaned and evaluated, which could take weeks.

The shift in tiers comes as the state makes some gains. Hospitalization rates declined 24% over the last two weeks, with coronavirus patients now taking up just 4% of beds across the state. And the number of people requiring intensive care has dropped 21%, with coronavirus patients making up 13% of all ICU patients. The two-week COVID-19 testing positivity rate has also dropped to 4.3%, with the seven-day average falling to 3.8%.

“Next week, we may see some movement,” California Health and Human Services Secretary Mark Ghaly said Tuesday during a news conference with Gov. Gavin Newsom.

Once counties have moved from one tier to the next, they must remain there for three weeks and show at least two consecutive weeks of stable conditions before they are allowed to move to the next tier.

Newsom said the state anticipates moving up to seven counties next week, but did not specify which ones.

And he cautioned that the state has just emerged from a three-day holiday weekend, which historically “have not been advantageous.” The state saw a spike in coronavirus cases after the July 4 weekend, with health officials pointing to family gatherings as a cause.

Asked about a large religious concert and rally that drew thousands to the Capitol in Sacramento this past weekend, Newsom cautioned against large gatherings — particularly those without masks and social distancing.

“Quite literally someone could lose their lives,” he said. And while that may not be the intent, he added, “it may be the outcome.”