The mass-use of face masks may be acting as a de facto ‘vaccine’ against coronavirus, scientists have claimed.

Masks, particularly surgical and cloth ones worn by the bulk of the population, are not perfect and allow some viral particles to slip through into wearer’s airways.

Experts say repeatedly exposing people to small amounts of Covid-19 in this way may train their bodies to recognise and fight it off, effectively immunising them.

The unproven theory was detailed by scientists from the University of California in an editorial in the New England Journal of Medicine.

It is unlikely the hypothesis will be proven beyond doubt because that would require exposing people with and without masks to the virus in clinical trials, which would be unethical.

But the theory may partly explain why fewer people are dying or falling critical ill with the coronavirus.

The scientists behind the commentary have stressed that people should not get complacent or purposefully put themselves in harm’s way of Covid. 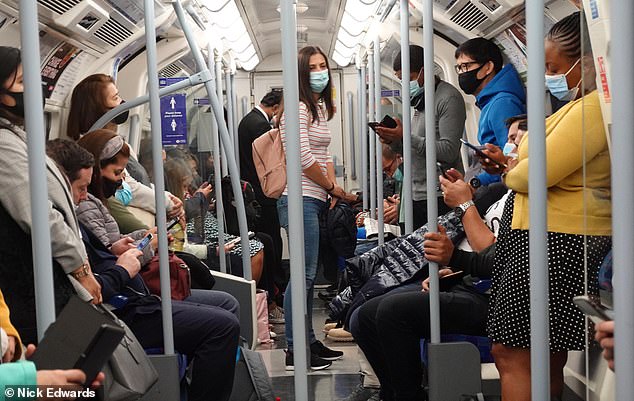 The mass-use of face masks may be acting as a de facto ‘vaccine’ against coronavirus, scientists have claimed (file)

‘This is not the recommendation at all,’ they wrote, urging people to still keep socially distanced from others and avoid cramped indoor spaces with little ventilation.

The idea that masks may offer some immunity against Covid-19 hinges on the theory of variolation, a centuries-old immunisation technique.

Variolation is the practice of deliberately infecting people with low doses of a pathogen to generate a protective immune response that prevents reinfection.

The controversial technique was used throughout history to immunise people against smallpox but was eventually replaced by modern vaccines which use weakened forms of virus to make them much safer.

Dr Gandhi, writing in the paper, said: ‘You can have this virus but be asymptomatic. So if you can drive up rates of asymptomatic infection with masks, maybe that becomes a way to variolate the population.’

The US researchers admit that their theory makes two broad assumptions about Covid-19 which have not yet been proven.

Their argument hinges on the idea that getting infected with smaller doses of the virus lead to less severe disease and that mild or asymptomatic people enjoy long-term protection.

The UK Government’s Scientific Advisory Group for Emergencies (SAGE) has previously said it believes ‘viral load’ plays a big role in how sick someone will become.

They said it explains why so many healthcare workers – who come into face-to-face contact with gravely ill patients – have fallen victim and died from the disease.

Having a high viral load – the number of particles of the virus they are first infected with – gives the bug a ‘jump start’.

It also raises the risk of a patient’s immune system becoming overloaded in its battle against COVID-19.

It means someone infected indirectly by touching a door handle could end up with milder symptoms than someone who inhales an infected person’s cough.

The University of California experts believe mass mask wearing has greatly reduced the amount of viral load the average person gets infected with.

This may partly explain why mortality rates in intensive care units have plummeted. Analysis by the University of Bristol shows the proportion of patients dying from Covid-19 in ICU wards around the world has fallen by a third since March.

But improving survival rates are largely thought to be driven by doctors getting better at treating the disease, which they knew nothing about earlier in the year.

Critics have dismissed the mask immunisation theory, which they warn could be dangerous if the public get too complacent and take unnecessary risks.

Saskia Popescu, an infectious disease epidemiologist based in Arizona who was not involved in the editorial, told Yahoo News: ‘It seems like a leap. We don’t have a lot to support it.’

‘We still want people to follow all the other prevention strategies. That means staying vigilant about avoiding crowds, physical distancing and hand hygiene — behaviors that overlap in their effects, but can’t replace one another.’