Public health measures designed to slow the spread of coronavirus have ‘turned the airline industry on its head’ and could see it change forever, a new study claims.

A team of industry experts say that, in future, airlines are going to see a spike in passengers wanting direct flights between major cities rather than making a layover in packed hub airports, where there is a greater risk of catching Covid-19.

Researchers from City, University of London, IE University, Spain and the University of Sydney examined the possible impact of Covid on Ultra Long Haul (ULH) flights.

To be classed as a ULH flight it has to last at least 14 hours per leg and fly direct from one major global city to another, according to the research team.

These flights are more efficient, and safer than flights requiring a layover but will likely always remain at a premium price, said lead author Linus Benjamin Bauer.

He believes that, in future, people will make more direct long-distance flights with support from domestic feeder transport networks linking to major airports. 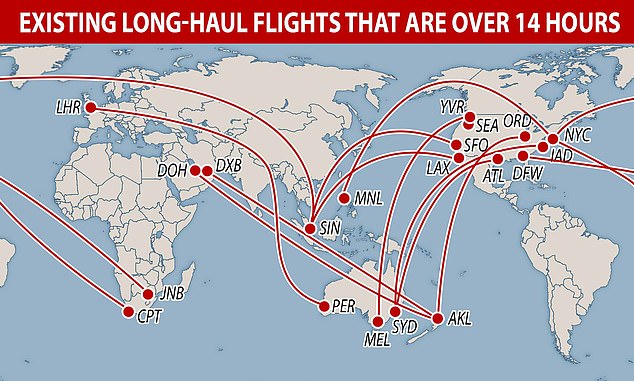 Covid-19 has sent shockwaves throughout the aviation industry, pushing a myriad of liquidity-strapped airlines into administration or part-government-ownership.

This has led to a strange phenomenon – a notable rise in long-haul flights connecting locations around the world without a change midway through the journey.

Some of this has been led by the fact a number of airlines had the opportunity to ‘test out’ the logistics of operating ULH flights, through repatriation and cargo delivery trips during the early days of the coronavirus pandemic.

This gave them unique data that helped show these flights were viable and potentially led to an increased desire to launch future routes.

TEN OF THE LONGEST NON-STOP FLIGHTS AROUND THE WORLD

Bauer said these longer routes are likely to become much more common in future, as they offer a competitive advantage that could outperform other business models.

However, while some of it will be at the expense of the current layover network, it won’t kill it off entirely as tourists are still more likely to opt for the cheaper ‘Hub and Spoke’ flights.

‘Our argument is that ULH will increase in relevance, whilst H&S will reduce, which at a net level, will see less larger planes travel and an overall capacity reduction in global air travel by extension,’ said co-author Daniel Bloch.

‘It is likely that this reduction in net seat capacity will invariably push up prices of long-haul journeys, especially now as airlines have retired and phased out their larger aircrafts like the A380s and 747s.’

Combined with a strong domestic feeder system – through more local flights between the major long-haul airports – ULH operations could be the future of the industry – especially for business travel.

‘If one thing seems certain about the implications of the Coronavirus, it is that aviation will likely never come to resemble its recent, former self.’

In fact, it will look very different to anything suggested in predictions before coronavirus – including more very long flights mixed with domestic networks.

For the Perth-London service, for instance, Qantas relies on a strong domestic feeder network in Australia, Bauer explained, saying this connects Sydney, Brisbane, Melbourne, Adelaide with Perth and then on to London.

For the Seattle-Bangalore flight, the carrier American Airlines would rely on the strong domestic feeder network of its partner Alaska Airlines.

From the European perspective, a strong pan-European feeder network to large hubs such as Heathrow, Frankfurt and Charles de Gaulle would be required.

Direct UHD flights ‘seek to directly connect cities in far reaching corners of the Earth’, according to the research team. 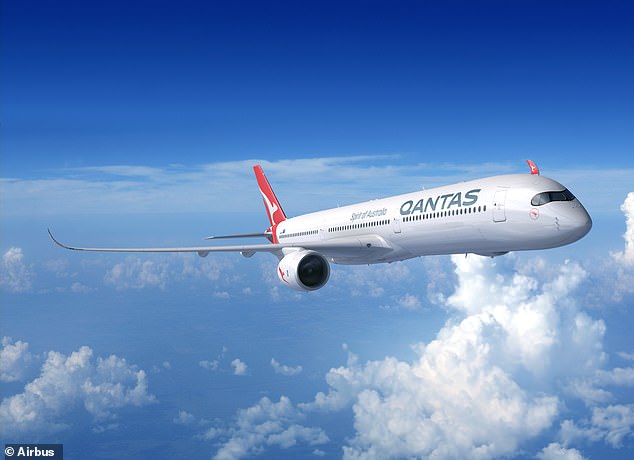 Qantas operate a number of long-haul direct flights including between Perth, Australia and London Heathrow

These flights include trips between Perth, Australia and London as well as journeys that connect Singapore with New York – each taking at least 14 hours per leg.

This in turn worked to shape the available network of ULH routes around the world and led to these services proving to be a better option for time-sensitive travellers.

‘During and after the pandemic, we’ll witness an increase in demand for direct services – driven by the health-conscious passengers and elderly people with higher willingness to pay,’ Bauer told MailOnline.

This would allow them to avoid large hubs in the Middle East or South East Asia due to COVID-19, as well as reduce the impact from jet-lag.

‘The future rise in ultra long-haul flights along the Kangaroo Route (Australia-Europe) will have an impact on tourist-driven long-haul journeys,’ he said.

‘However, [the impact] will be limited since the leisure passengers aren’t one of the main targeted customer segments.’

Ultra long-haul operators like Qantas position themselves in the premium market segment by commanding a higher fare for the direct flight.

To compensate for the higher price, airlines offering long direct flights tend to use customer service and reliability as an added benefit to passengers.

‘In this case, the feasibility of premium pricing is influenced by competition, customer perception of value, economic conditions and the dynamics between the relevant city pairs,’ said Bauer, an aviation analyst.

By taking the last point into account, the worsening of the US-China relations, potentially accelerated by COVID-19, could lead to a boost in US-India relations and new direct routes between the two nations. 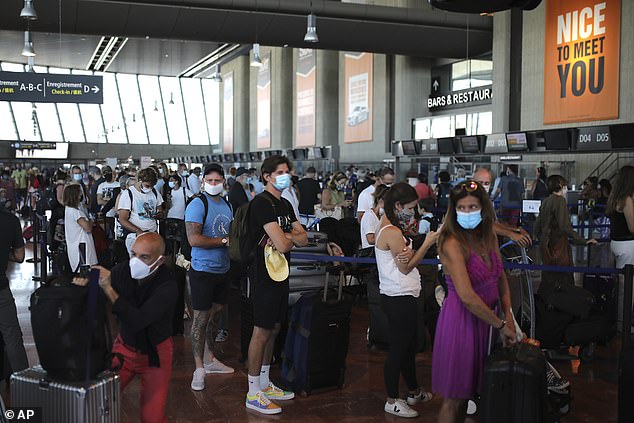 These flights are more efficient, and safer than flights requiring a layover but will likely always remain at a premium price, said lead author Linus Benjamin Bauer

‘These developments could stimulate a myriad of new economic activities, which could thereby generate demand for new ULH services between the West Coast of the US and India,’ the team wrote.

There is also interest in connecting more European locations such as Manchester, Frankfurt and Rome directly to Australian cities without a layover.

The key selling points of ULH appear to not only maintain the characteristics necessary to survive the COVID-19 era, but to become increasingly attractive as the industry attempts to return to some new form of normalcy, the authors explained.

AIR TRAVEL WAS A ‘MAJOR’ DRIVER IN SPREAD OF COVID-19, STUDY FINDS

Covid-19 outbreaks have been worse in areas with major airports and large numbers of travellers passing through them, according to a global report.

The Institute for Economics and Peace (IEP) said the spread of the disease was ‘highly correlated’ with air travel.

It claimed the UK was a prime example of where constant flights, both domestic and international, had ‘facilitated contagion’.

The IEP’s Global Peace Index report said: ‘The flow of air passengers across and within country borders has been a major contributor to the spread of the virus’.

A director at IEP, Serge Stroobants, said: ‘The countries most impacted are countries that are really participating in global trade in the globalised world and the interconnected world.’

‘These are countries in which you will find a large airport hub, giving the potential to people to travel from one country to the other.

‘That’s why, for example, the region of Milan in Italy, Paris, Brussels, Frankfurt, London and New York, those big international hubs created more exchanges and more potential for the virus to grow.’

Any health risks from these 14+ hour flights – such as dehydration, jetlag and lack of movement can be offset with modern cabin design and the benefits of avoiding Covid-19 hotspots including busy hub airports ‘outweigh these risks’, the team said.

‘To this end, whereas ULH may have previously been steadily growing in popularity prior to the onset of the pandemic, there is now strong reason and evidence to believe that the implications of the Coronavirus will accelerate the acceptance and use of the point-to-point, ULH approach.’

The team believe that the coronavirus crisis provided a foundation for airlines to test out their ability to deliver these longer and more direct services.

A myriad of carriers conducted a range of special repatriation and cargo flights, which comfortably fell into the Ultra Long-Haul bracket.

This included, but was not limited to the likes of, El Al, SWISS Airlines, and Air Tahiti Nui, each of which each conducted record breaking ULH flights.

Importantly, these ULH flights provided both airlines and governments alike with the ability to deliver people back to their countries’ of origin and maintain vital global supply lines, all in a safe and direct manner given the operations’ ability to bypass otherwise risky or infected stopover points.

In turn, due to the numerous new ULH operations having been conducted throughout the COVID-19 outbreak, more airlines than ever before have obtained otherwise inaccessible sets of data on the nature of such services.

As a direct result, this might spark even further interest in ULH operations from airlines who now recognise both the value in, and their ability to, deliver such services in a more scaled and commercial context.

‘The fundamental objective is to pitch a better bid for customers’ business than competitors are pitching by offering perceptibly more customer value to targeted customer segments,’ he said.

During the post COVID-19 recovery phase in the upcoming next years, we’ll witness an increase in fares on long-haul flights – including ULH services, said Bauer.

There will be an overall change to the whole airline industry in future – a mixture of more point-to-point flights and and feeder journeys – but an overall decline. 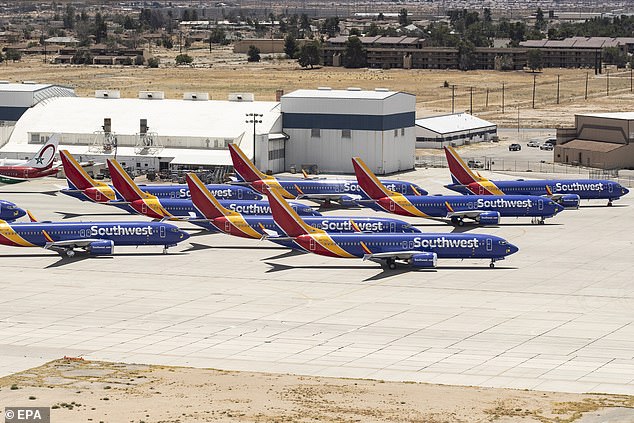 ‘We’ll witness a drop in overall air travel in the short- and medium-term (subject to COVID-19 developments), however, the demand for travelling by plane will ultimately return to the long-term growth trajectory (2025 and beyond),’ Bauer said.

Overall, with ‘optimisation over scale’ set to become the gold standard for aviation, airline business models will be forced to adjust accordingly to the new-normal.

‘While we have shown that higher load factors and yields would make the ULH business model more commercially viable than both traditional Hub and Spoke and low cost carrier operations, we have also presented a series of health benefits that come with ULH services,’ the authors wrote.

‘Not only would ULH passengers be able to bypass busy international hubs, within which physical distancing may become an issue once traffic builds up again, but also on-board an ULH service whereby distancing is easier to implement given the aircrafts’ lower configuration levels.’

Things are going to get more expensive though, according to Bloch, who said it will take some time for the number of people flying to go back up to 2019 levels and things will become more expensive in the meantime.

‘It’s clear that many companies and industries are eagerly waiting to be able to freely travel for work again, of which there is significant pent up demand,’ he said.

‘To this end, ULH flights invariably appeal to this demographic due to its efficiency, their ability to work and rest uninterrupted, as well as its health benefits.’

He said ULH will become more relevant, hub and spoke less relevant and an overall reduction in capacity across the entire global air travel network.

‘So at a simplistic level, yes, we would expect fewer flights overall, with a higher proportion of them being ULH than before,’ said Bloch.

The findings have been published in the Journal of Air Transport Management.

An Ultra Long Haul (ULH) flight is a journey between two airports with no stopover that lasts for at least 14 hours.

These flights usually follow a circle route, often passing over a polar region on the way between two major global cities such as London and Sydney.

The longest commercial flight in the world is currently Singapore Airlines Flight 22, which flies from Singapore Changi Airport to Newark Liberty International Airport in the US – lasting 18 and a half hours.

The longest range jetliner in service is the Airbus A350 XWB Ultra Long Range, capable of flying up to 9,700 nauticle miles on a single trip.

Researchers claim that in future ULH flights will become preferable over the ‘spoke and hub’ approach involving a layover due to health concerns.

They say that avoiding a busy hub airport by flying direct reduces the chance of being exposed to coronavirus.