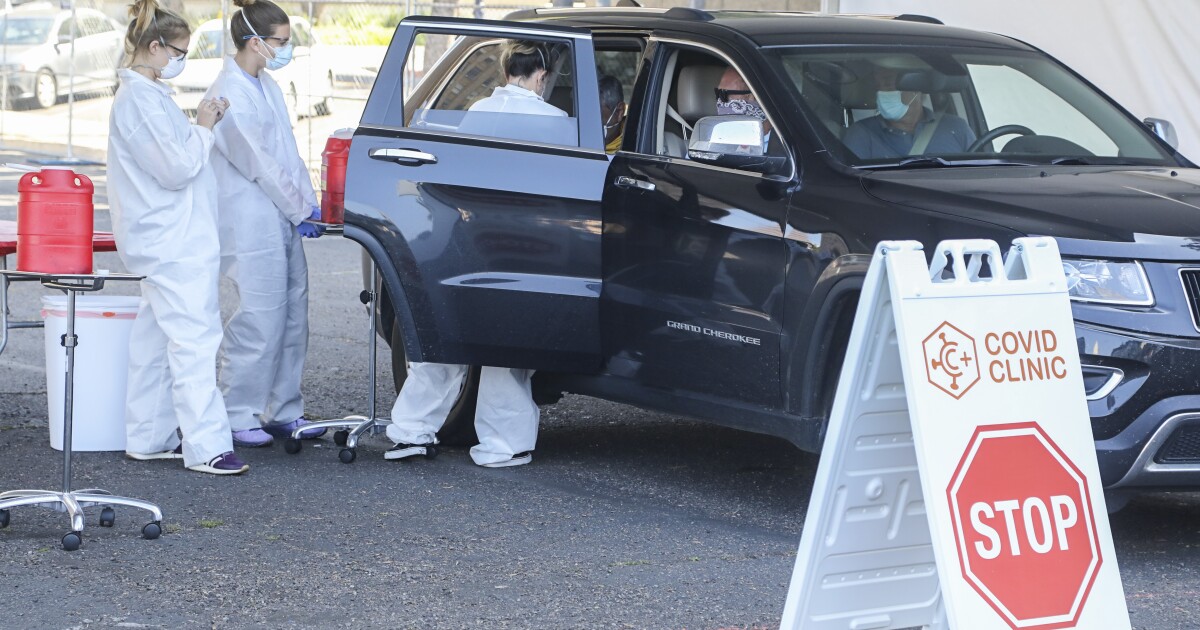 When deciding on coronavirus restrictions, California gives a break to counties that perform more tests for the virus than the state as a whole. San Diego County will need the biggest such adjustment it has ever received to avoid falling back into the state’s most-restrictive tier.

Though the state usually releases a new tier report every Tuesday, that will not be the case this week. Because Tuesday is election day, the California Department of Public Health confirmed Monday afternoon that it would delay the document’s release until Wednesday.

According to coronavirus testing data available Monday, the day the state usually pulls information to make its weekly tier calculations, the county’s unadjusted case rate for the seven-day period from Oct. 18 through 24 is 8.7 cases per 100,000 residents, significantly above the limit of 7 that marks the boundary between its current reopening tier, color-coded red, and the state’s most-restrictive tier, purple.

A drop to purple would mean local restaurants, places of worship and other locations would no longer be able to use up to 25% of their indoor floorspace, a change that would surely cause more than a little upset, especially as colder weather arrives.

It takes two consecutive weeks, however, with purple scores for any county to fall a tier. So a second purple score in next week’s report would be required for consequences to occur.

And it is possible that a bonus will keep San Diego County from taking on a purple tinge this election week.

The state adjusts scores downward if a county collectively performs more coronavirus tests than the state as a whole. The idea is to avoid punishing places for testing broadly and discovering cases that might otherwise have remained undetected. Likewise, the state does not want counties to lower their numbers of positive cases by simply testing less.

San Diego County has registered case rates over 7 in each of the last three weeks but has had those scores adjusted downward, to below 7, because it has consistently performed more testing per capita than the statewide median.

This week’s score, however, is higher than any that the county has posted since the state issued its first risk-ranking scorecard on Sept. 1.

According to the very specific instructions posted in the state’s reopening blueprint, counties can see their scores adjusted downward by a maximum of 40% based on how much local testing volume exceeds rates observed statewide.

Last week, for example, San Diego County saw its raw rate of 7.4 decreased by 11.7%, to 6.5, because the region collectively performed 309 coronavirus tests per 100,000 residents, a rate that significantly exceeded the statewide median of 239.

This week, the county will need a downward adjustment of 20% to see its rate drop from 8.7 to 7. Achieving such a drop would require the region to average about 359 tests per 100,000 residents during the state’s seven-day window, Oct. 18-24.

San Diego County’s daily coronavirus tracking report continued to show daily new case totals greater than 300 for the sixth straight day, including a total of 307 positives among 10,248 tests results returned Sunday. The region’s 14-day rate of positive test results is 2.9%. Local COVID-related hospitalizations increased a bit, hitting 288 on Sunday, the first time the number has been over 280 since Oct. 6. No additional deaths were reported.