Hundreds of cars from across the country descended on an English town in search of Covid-19 tests, ministers have been told.

Roads were blocked and tests quickly ran out in Telford on Tuesday after a booking system error directed people from Cornwall, London and elsewhere to the site in Shropshire, Conservative MP Lucy Allan said.

Meanwhile, local residents wanting tests were told to go 90-miles away to Aberystwyth or to Covid-19 hotspot Oldham – which is currently under a partial lockdown.

Health Secretary Matt Hancock vowed to examine what ‘glitch’ caused the issue, adding the Government is examining the broader problem of people being directed ‘too far’ for a test. 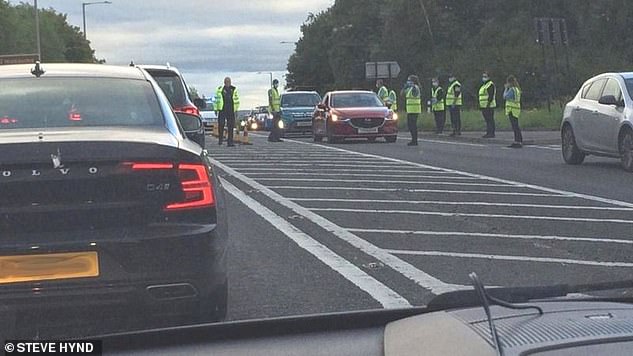 Hundreds of cars from across the country descended on an English town in search of Covid-19 tests, ministers have been told 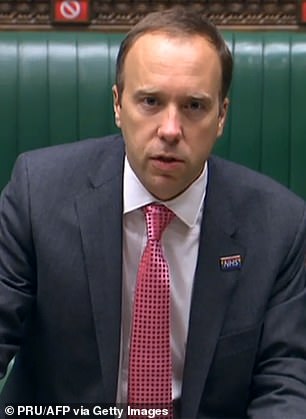 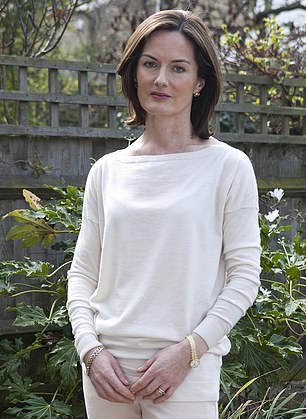 Conservative MP Lucy Allan (right) praised the Government’s progress on expanding testing capacity and thanked Matt Hancock (left) for his ‘tireless’ work. But the MP said constituents were no longer able to access tests in the area – and they in turn were sent elsewhere

Mother Kirstie Penman, 21, traveled an hour-and-a half – more than 40 miles – to Telford for a test, only to be turned away on arrival.

Ms Penman, 21, a student from Wrexham, initially rang her doctor seeking antibiotics for a bad chest but was told she would need to get a test for Covid-19 instead.

After being driven across the English border to Telford she was told by a staff member that she could not be tested because she had not received a QR code when she booked.

She said: ‘We were like, ‘is this a complete joke, we’ve just driven from an hour-and-a-half away?’, and there was no reassurance or nothing,’ she said.

‘He just said, ‘Sorry, there’s a queue behind you, you’ll have to come back when you get the code sent to you’.’ 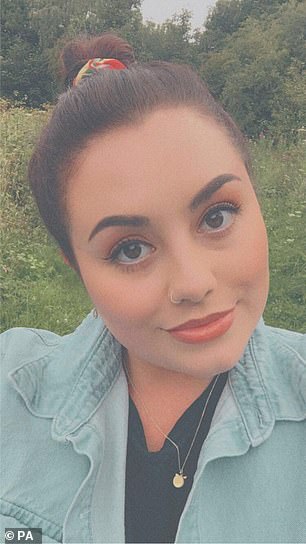 Kirstie Penman, 21, travelled from Wrexham to Telford for a coronavirus test, only to be turned away on arrival

‘At that point I just started crying, upset because it’s a long journey for a test. Then we just had to drive home. There was no other option, really.’

After trying a number of other options to get tested, the mother-of-one said she had given up.

‘There’s no way you can get through, it just cuts off, the phone line,’ she said.

Steve Hynd drove two hours from Wales to get his sons, aged one and three, tested in Telford – but was told by officials there were no more tests left.

Mr Hynd – whose father Mike, 80, tragically died from the disease – was then told he would have to go 68 miles away for another test the morning after.

He dubbed the government’s coronavirus testing system ‘all a shambles’.

Mr Hynd told inews: ‘My children both have consistent coughs and we are just trying to follow government advice

‘We tried again this morning to book and the nearest appointment is over three hours away, which is too far to drive with young children and how do we know there will be tests when we get there?’

Speaking in the Commons, Ms Allan praised the Government’s progress on expanding testing capacity and thanked Mr Hancock for his ‘tireless’ work.

But the MP for Telford added: ‘Inevitably this is not without its challenges.

‘On Tuesday evening, hundreds of cars from across the country – and I mean hundreds – descended on Telford and its testing site as directed by the booking system.

‘Tests quickly ran out, roads were blocked, people who had travelled from as far away as Cornwall, Stockport and London were turned away, and my constituents were no longer able to access tests in the area – and they in turn were sent elsewhere.’

She asked: ‘What assurances can (Mr Hancock) give that the error in the booking system that directed so many people to come to Telford has now been corrected, and does he agree that people should not be criss-crossing the country and travelling for many hours to secure a test?’

Mr Hancock replied: ‘Yes, I absolutely do. I agree with (Ms Allan) and her description of the situation, which is we have built this system at great pace.

‘I didn’t know about this example in Telford although I had heard of people telling me there was a lot of people directed to Telford in this instance.

Steve Hynd drove two hours from Wales to get his sons, aged one and three, tested in Telford – but was told by officials there were no more tests left 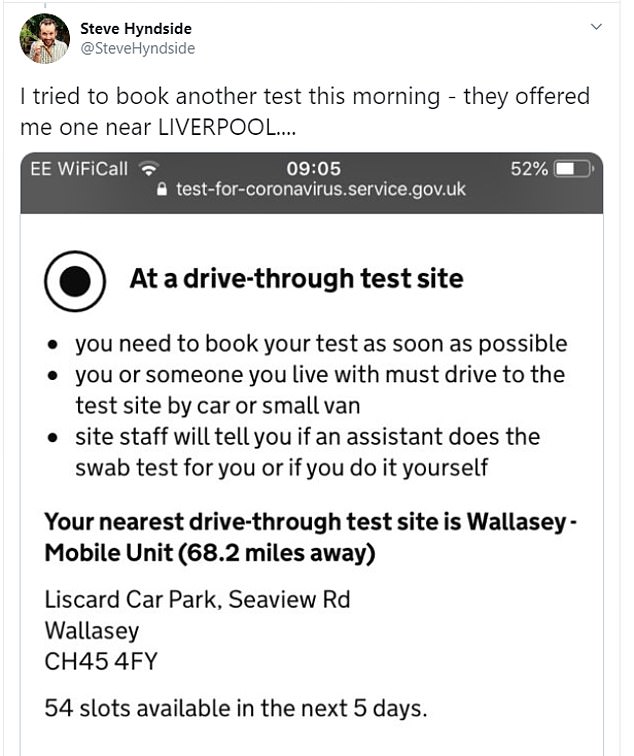 Mr Hynd – whose father Mike, 80, tragically died from the disease – was then told he would have to go 68 miles away for another test the morning after

‘I had a meeting on the problem of people being directed too far only on Tuesday evening after being in this House.

‘The broad problem is something we are absolutely looking at and I will go and take away the particular example and find out exactly what glitch caused it.’

A Department of Health and Social Care spokesperson said: ‘NHS Test and Trace is working, our capacity is the highest it has ever been and our laboratories are processing more than a million tests a week.

‘We are seeing a significant demand for tests but if you have symptoms we urge you to get tested. New booking slots and homes testing kits are made available daily and you can help protect yourself if you wash your hands, cover your face and make space. 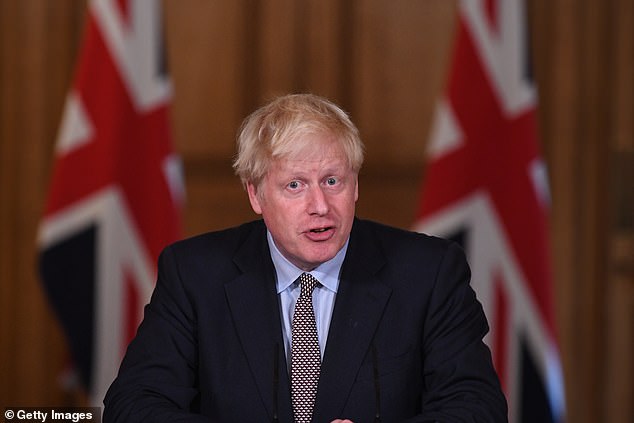 It comes as documents reveal Boris Johnson’s own SAGE experts raised serious doubts about his ‘moonshot’ plan for mass testing to save Christmas, costing £10billion

‘We are targeting testing capacity at the areas that need it most, including those where there is an outbreak, as well as prioritising at-risk groups and we recently announced new laboratory facilities and new technology to process results even faster.’

It comes as documents reveal Boris Johnson’s own SAGE experts raised serious doubts about his ‘moonshot’ plan for mass testing to save Christmas, costing £10billion.

The PM mooted the radical scheme at a Downing Street press conference last night as a way of returning the country to normality, with 10million people a day screened using rapid new kits.

But a SAGE assessment from August 31 insisted ‘careful consideration’ should be given to whether pouring resources into the scheme was more effective than boosting funding to Test & Trace, or encouraging people with symptoms to self-isolate.

The elite group said the ‘cheaper, faster tests’ needed for mass testing would inevitably be less accurate, and the screening could only be a ‘component’ of efforts to tackle the virus.

Ministers admitted this morning that the testing technology does not yet exist, with the government’s own scientists saying there is no guarantee it will ever be developed.

Minutes after the plans were unveiled by PM at yesterday’s Downing Street press briefing, Chief Medical Officer Chris Whitty said the technology was not yet available, warning he should not put a date on when it would be because ‘that’s not how science works’.

And Chief Scientific Advisor Patrick Vallance said: ‘There are prototypes which look as though they have some effect, but they’ve got to be tested properly.

‘We would be completely wrong to assume this is a slam dunk that can definitely happen.’