Most women won’t leave the house without their keys, purse and mobile phone — but Ally Hall has a different checklist.

She would never go out without her disposable gloves, antibacterial gel and a mini bottle of Dettol.

Now that we all live with the threat of Covid-19, this attention to hygiene seems almost par for the course. But Ally’s obsession with cleanliness started when she was eight.

For years, she has meticulously disinfected her house for a full two hours a day — and double that on weekends — wiping her kitchen worktops at least ten times a day and steam-cleaning floors daily. 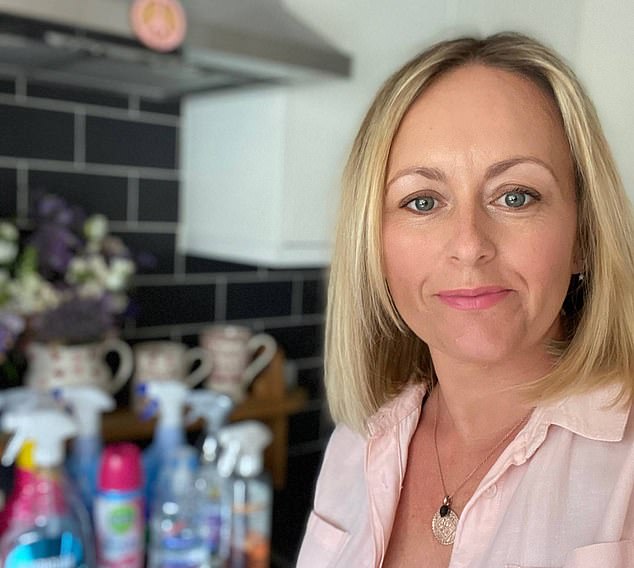 Even before the coronavirus pandemic Ally Hall, from Peterborough, Cambridgeshire, would never go out without her disposable gloves, antibacterial gel and a mini bottle of Dettol

It doesn’t stop there. Towels, tea towels and clothes are washed after one use and bedding changed twice a week.

The habit has cost her thousands of pounds over the years, since she can spend up to £15 a week on cleaning supplies.

The 43-year-old, a divorced hairdresser from Peterborough, Cambridgeshire, says: ‘I feel I can see dirt everywhere and I can’t relax until everything is show-home perfect.

I work from home as a hairdresser so, before Covid, a lot of people were in and out. I am constantly making sure it is clean.’

Although there is no doubt her clients appreciated the pristine environment, her cleaning has taken a painful toll on her personal life.

‘When I was married, my poor husband wasn’t even allowed to sit on the sofa after I plumped the cushions and my obsession drove him mad. 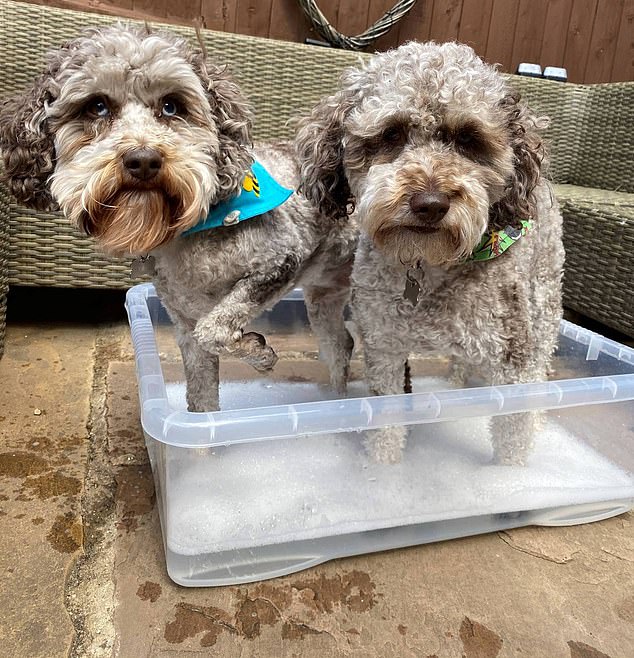 Ally, who lives with her two schnoodle (schnauzer and poodle cross) dogs, says she has no intention of easing her cleaning regime as restrictions loosen

‘Before that, I had one boyfriend who was very messy. He left wet towels and clothes on the floor.

‘He would chop raw meat followed by vegetables on the same board, which filled me with fear of food poisoning. It was a deal-breaker in the end and we had to split up.’

Ally has what psychologists call germaphobia, or the fear of germs; micro-organisms that cause disease such as bacteria, viruses or parasites.

It’s a phenomenon experts say is on the rise — even as our homes have actually become cleaner, thanks to modern disinfectants.

When coronavirus started to spread earlier this year, and lockdown came, you might assume Ally was horrified. Instead, she says, for the first time she felt almost normal.

‘My friends always thought I was mad,’ says Ally. ‘But now my cleaning doesn’t seem so over the top. I haven’t had the virus and I’m sure it’s because I’ve been so vigilant.’ 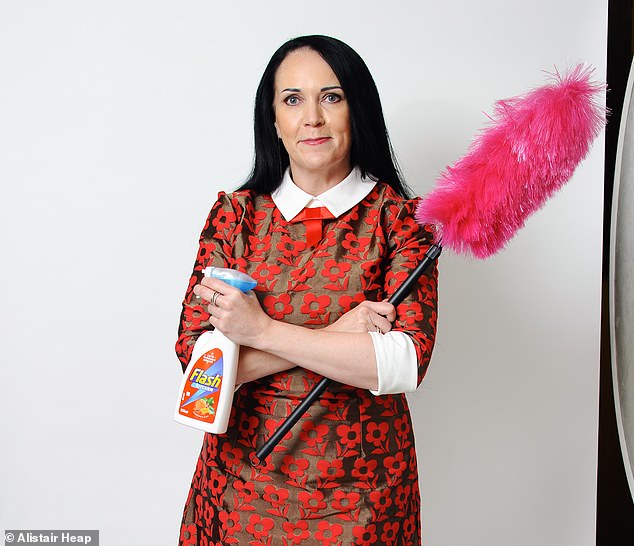 No microorganism stands much chance of survival in Jane Cohen’s house, either.

Ally and other British germa-phobes may well believe they are better equipped to deal with a deadly pandemic than most of us. But an obsession with cleaning can become abnormal, say experts.

‘For these women,’ says Consultant clinical psychologist Professor Pieter Kruger, ‘nothing really seems to be changing, as they are on high alert for germs anyway.

They are used to dealing with the uncertainty and having processes in place to deal with it.

‘A lot of people enjoy a clean house, but there’s a point where it moves into a more dysfunctional zone.’

However Ally, who lives with her two schnoodle (schnauzer and poodle cross) dogs, says she has no intention of easing her cleaning regime as restrictions loosen.

‘I’m convinced we will get a second wave,’ she says. ‘I spray my shoes with alcohol spray after being outside.

‘At the supermarket, I wear a mask and gloves. I spray the trolley bars and ask the check-out staff to use hand gel before they touch my purchases.

‘At home, my shopping gets wiped over with alcohol spray and my fruit and vegetables are washed in soapy water.’

She even cleans her pooches’ paws after walks, with special dog cleaner. ‘There was a group of guys while I was on a dog walk and they all kept spitting on to the grass.

‘I thought: ‘If the dogs walk in that, it will go in the house’, so I wash their paws after every walk.’ 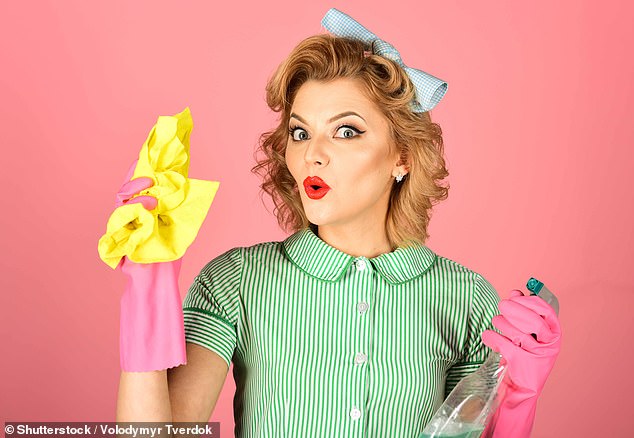 Even before the pandemic, Jane would scrub the kitchen floor with bleach on most days

Even before Covid-19, intensive cleaning had been enjoying a surge in popularity thanks, in part, to the rise of cleaning influencers such as Mrs Hinch and Lynsey Crombie, who manage to make domestic chores look glamorous and satisfying.

But that doesn’t mean we should all be following Ally’s lead.

On the contrary, says Professor Anthony Hilton, an expert in applied microbiology at Aston University, Birmingham, too much cleaning could store up problems for the future.

‘Our homes are a collage of organisms that we bring in,’ he says. ‘While we need to kill harmful bacteria that cause illness, we need some exposure to bacteria to keep our immune system healthy.’

Research last year by the International Scientific Forum on Home Hygiene suggested a lack of exposure to microbes is doing us harm.

Our sterile surroundings are associated with rising levels of asthma and food allergies, as well as autoimmune diseases and Type 1 diabetes.

Certainly no microorganism stands much chance of survival in Jane Cohen’s house.

Even before Covid, the 50-year-old mother of two grown-up children could be found scrubbing the kitchen floor with wipes and bleach most days, even pulling her fridge out from against the wall weekly so she could clean behind it.

‘My friends say I’m silly and should just do it with a mop, but mops are full of germs,’ says Jane, a divorcee from Cardiff who works in PR.

‘I use at least two or three bottles of bleach and five packs of anti-bacterial wipes a week, spending about £20.

‘I wash my cups and cutlery in bleach. I’m always chucking bleach down the toilets. You could eat your dinner off them.

‘I even bleached all the mugs at work — there were raised eyebrows.’ 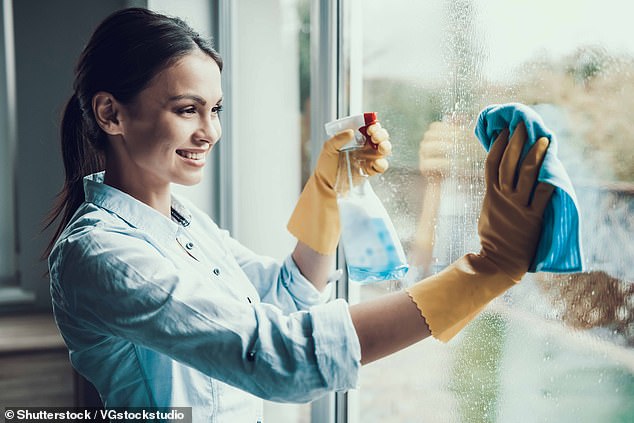 Her colleagues are right to be alarmed. Inhaling bleach fumes can be harmful, so it is far from advisable to use it on household utensils.

But the impact of Jane’s need to clean goes beyond awkward moments in the office kitchen.

‘I haven’t lived with a partner for 18 years, as I couldn’t cope with anyone’s mess or germs,’ says Jane. ‘It’s definitely got worse over time.

‘Friends are always moaning to me about how their husbands leave dirty dishes in the sink and I could never live with that. It’s a shame, but it’s just the way it has to be.’

She finds it hard enough popping round to a friend’s house.

‘If their home was a mess I’d always say no to a cup of tea as I couldn’t risk it,’ says Jane, who insists she can’t remember the last time she was ill or went to the doctor.

Since the pandemic, Jane doesn’t have to worry about friends’ dirty homes — and says that many of them are now seeing things from her point of view.

‘People are getting worse than me!’ she says. ‘Everyone is wearing masks and using sanitisers and I suddenly don’t feel so alone.’

Her own cleaning routine has stayed pretty much the same, although she does now wipe down the steering wheel and gear stick in her car before driving.

She takes hand sanitiser everywhere she goes and wears gloves to the supermarket.

There is a difference, however, between the temporary germaphobia we have all felt since Covid and the long-term, potentially dangerous compulsion, warns Pieter Kruger.

‘If your cleaning has been causing some sort of issue or negative consequence with yourself or loved ones, it is an indication you have probably crossed the line,’ he says.

‘The origin of obsessive cleaning can have multiple sources. It could be partly learned behaviour — from a parent, for example.

Once it reaches a more dysfunctional level, however, chances are that either compulsive perfectionism or even a form of obsessive compulsive disorder (OCD) could be at play.’

Natacha Sullivan, 26, says it was feelings of guilt that prompted her obsessive cleaning after her daughter, Nariyah, five, developed asthma at just six months old.

‘I felt like it was my fault and my house wasn’t clean enough,’ says Natacha, a stay-at-home mum from Maidstone, Kent, who also has a one-year-old daughter, Aaliyah.

‘I bleached the kitchen, bathroom and toilet twice a day and would take hand sanitiser wherever I went — I was constantly using it on my and Nariyah’s hands.

‘I would wipe the table with anti-bacterial wipes if we were in a coffee shop, and I probably spent £15 a week on wipes, sprays, hand sanitisers and dusting cloths.

‘I’ve even wiped toys when we went to friends’ houses to play — luckily they just laughed it off because they knew about my cleanliness.

‘If the house isn’t clean, I feel dirty and itchy and I can’t relax.’

Her NEED for cleanliness even landed her in hospital last year.

‘I fell out of an upstairs bedroom window because I was so busy cleaning the windows that I lost my balance,’ she says.

‘I broke my right leg and fractured both my ankles.

‘My friends think I’m crazy, but Nariyah and I rarely get colds or coughs.’

Natacha found it challenging when her oldest daughter went back to school before the summer holiday. ‘I was anxious, but I knew I needed to do it for her wellbeing,’ she says. 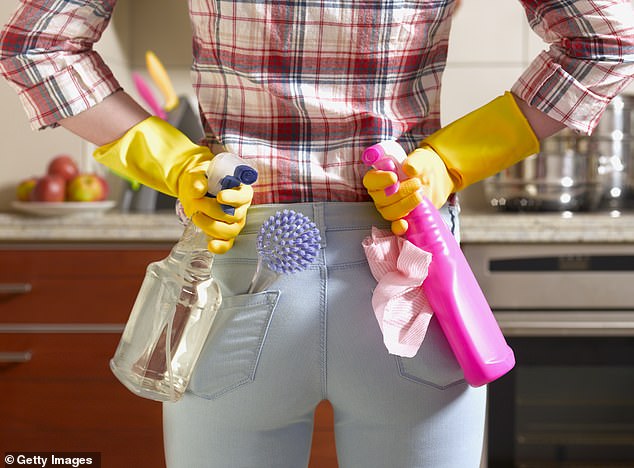 ‘I trusted she would wash her hands at every opportunity, like I explained to her.

Then I made sure the clothes she wore went straight in the wash when she got home and she had a bath.’

Natacha doesn’t know if her cleaning has helped protect her family from coronavirus, although they haven’t been sick.

But, for her, germaphobia has become a burden — especially now she’s worried about the pandemic.

‘I’m at home all the time now, so I’m cleaning much more on a daily basis and I’m constantly going over door handles and light switches and vacuuming twice as much,’ she says.

‘My hands are so cracked from all the handwashing and sanitiser. I wish I could feel more normal — it’s so time and energy-consuming. It’s a nightmare to live like this.’