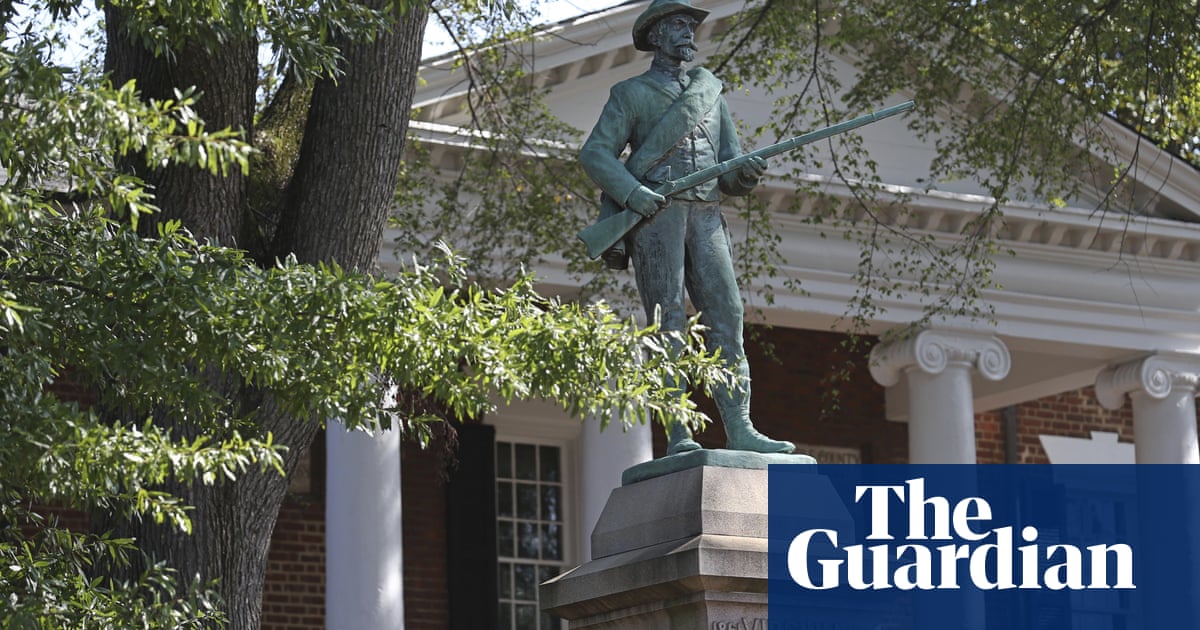 Engineers in Charlottesville, Virginia worked to remove a 900lb Confederate statue on Saturday, a moment of symbolic reckoning in the university town that was rocked by a white supremacist march in August 2017.

The statue taken down was not that of Robert E Lee, which extremists said they were defending in clashes which led to the murder of a counter-protester. Instead, Charlottesville removed a bronze figure of a Confederate soldier, known as “At Ready”, that has stood for 111 years outside the Albemarle county courthouse.

Around 100 people cheered from behind barricades as bronze plaques were taken off the sides of the monument and a cannon was removed, the Washington Post reported. Police stood by.

“This is a magnificent moment,” community organizer Don Gathers, 61, told the Post. “Much of the racial tension, strife and protest we’re seeing across the country emanates from right here in Charlottesville. But now we’re moving the needle in a positive way.”

Donald Trump provoked outrage in 2017 when he said there were “very fine people” on both sides of clashes in which Heather Heyer, 32, was killed when an extremist drove his car into a crowd.

Statues to leaders and generals of the Confederacy, which fought and lost the American civil war in an attempt to maintain slavery, have returned to the news this year, amid nationwide protests over racism and police brutality stemming from the killing of George Floyd by Minneapolis officers in May.

Albemarle is the first locality to use a process for removing statues that was approved by the state’s general assembly. But activists have said they are disappointed that “At the Ready” will be re-erected elsewhere.

“We feel like it’s just basically toxic waste disposal in another community,” Jalane Schmidt, an associate professor at the University of Virginia, told the Post.

In Richmond, the state capital, protesters removed a statue of Jefferson Davis, president of the Confederacy from 1861 until 1865. The Democratic mayor ordered another 11 memorials taken down.

Supporters who argue they are no more than memorials to war veterans have filed suit to save them. The city argues that the monuments, put up like many such statues decades after the civil war, “were intended to, and did, send messages of intimidation, exclusion and hostility to African Americans”.

The issue of whether the statues “were part of a regime of city-sanctioned segregation” is headed for state supreme court.