When police first arrested Dennis Nilsen on suspicion of murder in 1983, they couldn’t believe their ears.

The mild-mannered Job Centre worker, whose drains had been found to be blocked with human remains, immediately confessed to as many as 15 murders – he couldn’t be quite sure – as he sat in the back of the police car.

Now Nilsen’s horrific story is told in Des, a chilling new three-part drama from ITV that is both a disturbing look into the mind of the psychopath – he was sometimes called ‘the kindly killer’ because he would cuddle the corpses of his victims – and a tense retelling of the detectives’ desperate attempts to discover exactly who he had murdered.

Broadchurch and Doctor Who star David Tennant, in arguably his best performance, is genuinely chilling as the serial killer who oozes a skewed sense of righteousness and who would later bizarrely claim he wanted to help get ‘justice’ for his victims, while playing cat and mouse with the police. 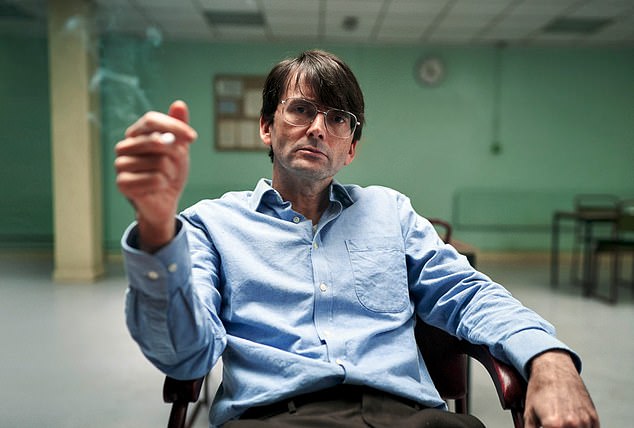 David also served as a producer, after becoming fascinated by a man who looked eerily like him.

‘I used to live down the road from Cranley Gardens in Muswell Hill where Nilsen was caught, so I knew about him,’ says David, 49.

‘Some people said, “Oh, he looks a bit like you,” which, as an actor, is intriguing. So I started to investigate. I read the book about him, Killing For Company by Brian Masters, and it was unfathomable. He was seen as a nice man but he was leading a double life.

‘Our story asks how a human, who’s so apparently normal, becomes capable of these inhumane crimes.’

Scottish-born Nilsen, who died in prison in 2018, was a former police officer and trade unionist. He was intelligent and kind, and that’s how he lured his victims in.

In 1980s Britain, as unemployment spiralled, there were countless desperate young men living in poverty in London. 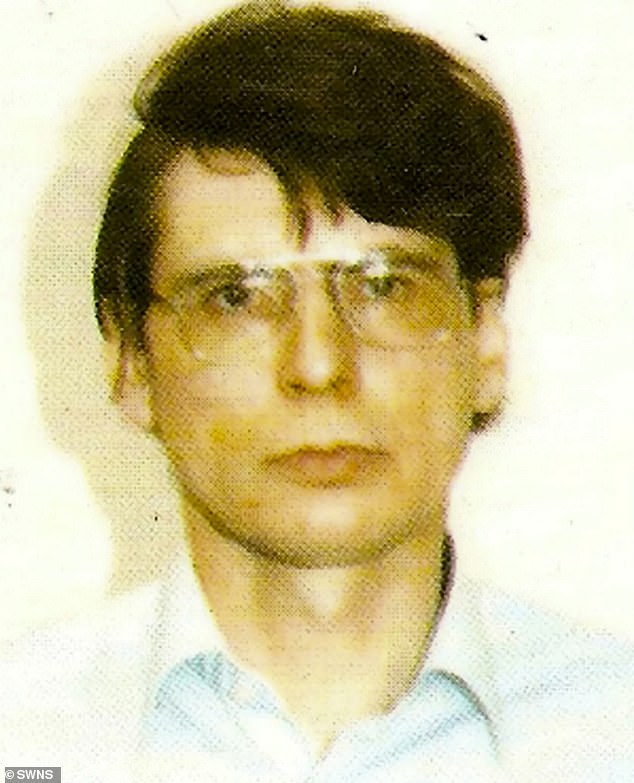 Nilsen confessed to as many as 15 murders in 1983 but didn’t offer the names of his victims to police. Pictured: The real Dennis Nilsen

‘Call me Des,’ he would say to his potential victims in pubs around Soho and north London.

He would show them kindness before luring them back to his flat – first in Melrose Avenue, Cricklewood, and later in Cranley Gardens. Then he would strangle them.

‘To the outside world Dennis was normal, even boring,’ says David, who did months of research including reading Nilsen’s prison notebooks.

‘He took them to his flat, murdered them and kept their bodies under his floorboards. Eventually he would burn the bodies in the garden.’

The police didn’t realise they had a serial killer on their hands until they stumbled upon Nilsen. He had called out a repairman to unblock the drains of his rented flat, but the DynaRod worker realised they were filled with human remains. 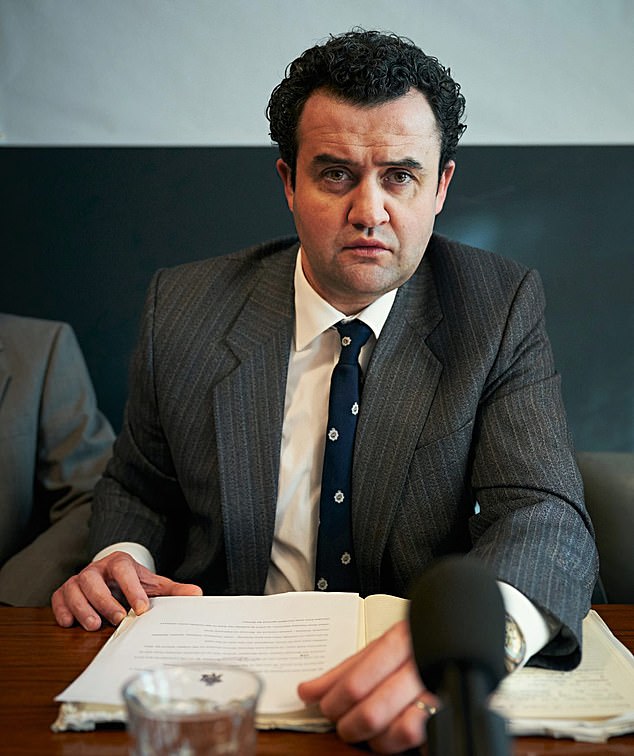 Police waited for Nilsen to return from work, then found a corpse inside. ‘Our story begins as his crimes are uncovered,’ says David.

‘The officers can’t comprehend what has happened, then they find more remains in his wardrobe. This, of course, is the beginning of an unprecedented murder case.

‘When Nilsen is caught he simply confesses, and almost all the information police got came from him.

The day Dennis Nilsen cut me off

Brian Masters seems an incongruous player in the Dennis Nilsen story. An upper-class writer whose previous works had focused on French authors and the aristocracy, his Nilsen biography Killing For Company is now seen as a seminal look into the criminal mind.

Brian (played by Jason Watkins, pictured with David Tennant as Nilsen) met Nilsen dozens of times, and recalling their first meetings at Brixton Prison he says Nilsen would slouch with his arm over one corner of his chair as if he was doing the interviewing.

‘He wanted to take charge of the proceedings and dictate the agenda, which was largely complaints over prison conditions,’ Brian recalls. 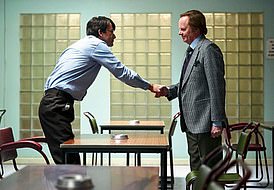 Brian Masters said Nilsen wanted to take charge of the proceedings and dictate the agenda. Pictured: David Tenant as Des and Jason Watkins as Brian Masters

‘My one-to-one visits took place regularly during the eight-month period of his remand awaiting trial. By the end, he was asking if he could borrow one of my ties to wear in court.’

Brian saw Nilsen every day after the trial and then visited once a month for ten years afterwards.

‘The alternative would have been to thank him for unprecedented co-operation then leave him to rot as punishment,’ says Brian.

‘I couldn’t do it, for my sake more than his. But on Radio 4 one morning, I compared his case with that of the serial killer Jeffrey Dahmer in Milwaukee. Dennis resented sharing the limelight – and he never sent another visiting order.’

‘The one thing he did not offer up – because he didn’t know or had a selective memory – were the victims’ names. So, we are with the police as they discover a case no one even knew was going on.

‘A lot of the men may have been reported missing but some weren’t particularly missed. Many of Nilsen’s victims had no family or had lost touch with loved ones, so he was going undetected.’

Line Of Duty star Daniel Mays plays DCI Peter Jay, who arrested Nilsen and spent months interviewing him. The murderer, while pretending to be helpful, withheld details of the victims that could have helped their families get justice.

Because he had burned and boiled away the evidence, the police really had to hunt for it. While Nilsen is believed to have killed between 12 and 20 people, only eight have been identified.

‘I had lunch with his widow and his son and they said how big an impact the case had on him. He was determined to get closure for the families and it’s telling that two years after this case he left the force.

‘He was really bruised by it. A lot of policemen said Nilsen was a complete and utter bore. He would go on and on, and David has embodied that.

‘When he describes dissecting the bodies, he does it so flippantly it gets eerie.’

The series also focuses on Nilsen’s biographer Brian Masters, played by Jason Watkins. As a gay man Brian grew interested in how the story was reported.

‘Somehow being homosexual was linked to the salaciousness of the crimes,’ says Jason.

The drama looks at how Brian and DCI Jay ended up working together when Nilsen pleaded not guilty due to ‘diminished responsibility’.

Brian was invaluably involved in the production too. ‘I was paralysed with admiration at David’s depiction of the inner man,’ he says. ‘I was seeing Nilsen all over again, it seemed.’

‘There’s been a lot written about him and there are people who knew him,’ says David. ‘But it’s hard to join the dots with him. He was an expert in self-justification, with a strong sense of righteousness which I keyed into.’

The victims’ families were invited to be part of the process, but there may be questions over whether dramatising these crimes is right. For David it’s important stories like this are told carefully.

‘We’ve used this angle because we didn’t want to be sensationalist,’ he says. ‘It’s about memorialising the victims.’