Saying they’re tired of ’empty gestures’ in the fight for racial equality, Miami Dolphins players released a video announcing they will remain in the locker room for both the ‘The Star-Spangled Banner’ and ‘Lift Every Voice and Sing’ anthems prior to the team’s season opener in New England on Sunday.

Similarly, the Houston Texans stayed off the field for both songs before Thursday night’s NFL season opener in Kansas City. League stadiums are playing ‘Lift Every Voice and Sing,’ considered by many to be the ‘black national anthem,’ before each Week 1 game of the new season following commissioner Roger Goodell’s admission in May that the NFL should have listened sooner to players’ concerns about racism.

The Dolphins’ video, which was released by ESPN’s Jay Williams on Thursday, shows head coach Brian Flores and 18 of his players demanding action and disparaging what they see as symbolic actions and ineffective demonstrations.

‘This attempt to unify only creates more divide,’ several Dolphins players said in the edited video. ‘So we’ll skip this song and dance, and as a team we’ll stay inside.’ 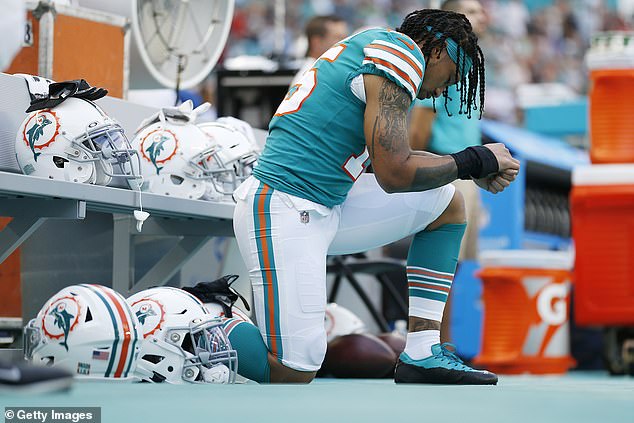 Albert Wilson of the Miami Dolphins kneels during the playing of the national anthem prior to the game against the Philadelphia Eagles at Hard Rock Stadium on December 1, 2019

Miami players also called out owners, who they feel have been slow to use their influence.

‘We need changed hearts, not just a response to pressure,’ they said. ‘Enough, no more fluff and empty gestures. We need owners with influence and pockets bigger than ours to call up officials and flex political power.’

Specifically, Dolphins players stressed that they want to move the conversation away from the anthem in favor of more meaningful change.

‘We don’t need another publicity parade,’ safety Bobby McCain said. ‘If you speak up for change, I’ll shut up and play.’

Linebacker Elandon Roberts summed up the dilemma for African-American athletes, who are upset over the killing of black people by police, but also care for the country’s military.

‘So if my dad was a soldier but the cops killed my brother, do I stand for one anthem and kneel for the other?’ he asked.

Debates over NFL player demonstrations have been a constant in the US since then-San Francisco 49ers quarterback Colin Kaepernick first refused to stand for the national anthem to protest inequality and racist police brutality in 2016.

Although Kaepernick has been a free agent since March of 2017, when he opted out of his contract in anticipation of his release, other players have continued demonstrating in the face of immense criticism from fans, media, and even President Donald Trump.

The protests spread to other leagues, such as the NBA, following the death of George Floyd in Minneapolis police custody on May 25.

And at Thursday night’s NFL opener in Kansas City, Chiefs fans were heard booing as players gathered at midfield for a moment of racial solidarity.

The Dolphins video concludes with Flores saying, ‘Before the media starts wondering and guessing, we just answered all your questions. We’ll just stay inside.’

‘I talked to Steve about the video. He was supportive,’ Flores said. ‘It was directed at everyone (in the NFL). I think every individual in this country can do a little bit better — players, coaches, owners, media. That was the message. To try to misconstrue the message or take it in some different light, that wasn’t what the message was supposed to be.