Donald Trump Jr has accused ‘Biden voters’ of rioting and looting after the Democrat blamed his father for violent unrest in cities across America.

Trump Jr said Biden sat in silence for ten days in ‘tactic acceptance’ of the unrest, and only decided to denounce it when polling showed it was hurting his campaign.

He also claimed that Obama escaped blame for riots in Ferguson and Orlando during his presidency, and accused Trump’s critics of having a ‘double-standard’. 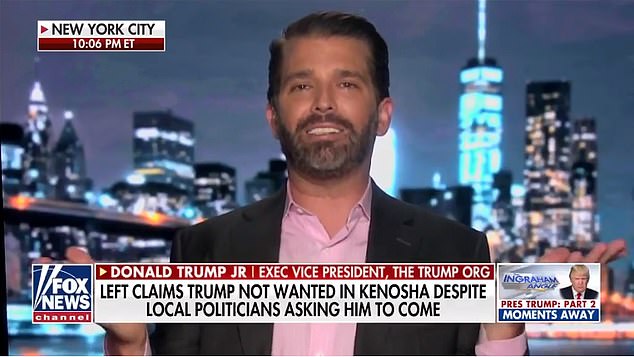 Trump Jr spoke out after Biden used a speech in Pennsylvania to denounce ‘rioting and looting’, saying it is ‘not protesting’ and calling on it to end.

He also denounced violence ‘from left and right’ while calling on President Trump to do the same.

Asked to respond to Biden’s comments, Trump Jr said: ‘No-one said that about Obama when you had the Ferguson riots, or Orlando, or the numerous riots there.

‘The reality is that Joe Biden said almost nothing about these things. He sat there.

‘There must be tacit [sic] acceptance because these are Biden voters, these are Democrat voters, that are out there doing this. 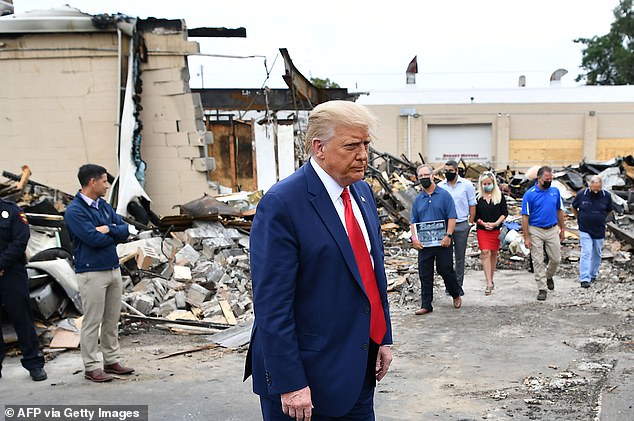 Trump has made ‘law and order’ the centerpiece of his reelection campaign, blaming Democrats for violence and unrest across America (pictured visiting businesses destroyed by rioting in Kenosha, Wisconsin)

‘Imagine wearing a MAGA hat in Portland? No. You could wear a Biden hat in any city in the country and no-one would do anything.

‘That’s the difference, that’s the double standard. Joe Biden said himself the other day… well, he was going to stay in his basement bunker for another 10 days before addressing it, until the polling issue came out, and then all of a sudden he says “well I may have to leave the bunker 10 days early.”

‘Ten days to act, as a president, this guy wants to lead our country? This guy isn’t fit to lead a kindergarten class.’

Trump Sr has moved to make ‘law and order’ the centerpiece of his reelection campaign, telling voters that the current unrest will get worse in ‘Biden’s America’.

In order to hammer home the message, Trump paid a visit to the city of Kenosha on Tuesday, which was partially-destroyed by riots sparked by the police shooting of unarmed black man Jacob Blake. 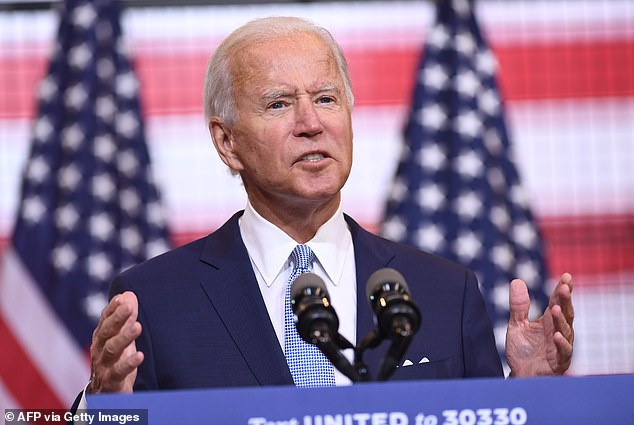 Biden used a speech on Monday to denounce rioting, looting and violence ‘by left and right’ while calling on Donald Trump to do the same

During scripted remarks, he called rioters ‘domestic terrorists’ while praising police, who he argued shouldn’t be demonized for making snap-decisions on whether or not to open fire in tough situations.

‘They’re incredible, yet many politicians ignore their sacrifice and ignore the African-American, Hispanic-American victims.

‘And if they make a wrong decision one way or the other, they’re either dead or they’re in big trouble,’ Trump continued.

‘And people have to understand that. They choke sometimes. And it’s a very tough situation.’

Trump did not mention Blake once by name during the speech, after a meeting with his family fell through because they insisted on having lawyers present.

The president said he felt that was ‘inappropriate’, while Blake’s father Jacob Sr insisted he didn’t want to ‘play politics’.