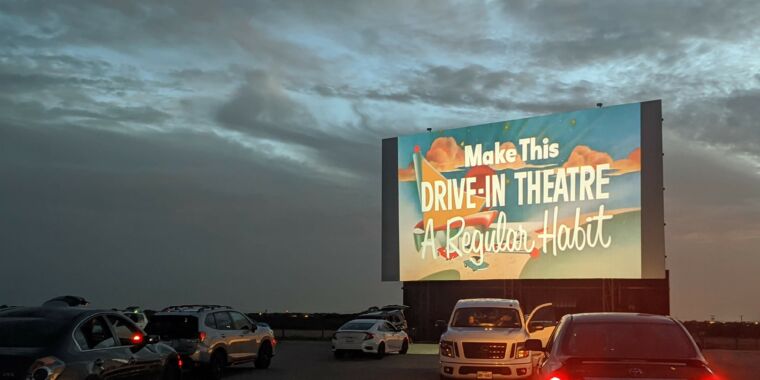 67 with 45 posters participating, including story author

NEW BRAUNFELS, Texas—The biggest irony in this summer’s cinematic saga over Tenet—director Christopher Nolan’s latest heady time travel detective movie that he and his studio insist must play in The Theater™ despite a worldwide pandemic—is that the film itself will inevitably get lost. Whatever performances, ideas, and dazzling set pieces Nolan manages to imbue into this film have and will become secondary to the bigger industry struggles. What does reopening theaters safely look like? Is it too soon to do so? Does limiting the release of such a high profile film to theaters become unethical if it puts viewers at risk? And if the bottom line continues to motivate all this, does pivoting to VOD-first, even temporarily in the midst of unprecedented health challenges, mean eventually transitioning to that model (and its potentially smaller revenue ceiling) forever?

All that stuff sat on my mind when I received two emails last month. The first, on August 11, seemed to be testing the water. “How do you feel about attending a ‘press only’ (no guests) in a playdate theater, where there will be social distancing and face masks required?”

My response: lol, no. Even movie theaters boasting HEPA Filter Vacuums and 25 percent capacity run directly in conflict with World Health Organization advice that suggests the best way to minimize COVID-19 risk is to avoid the Three Cs: crowded places, close-contact settings, and confined or enclosed spaces. The Texas Medical Association placed “going to the movies” near the top of its COVID-19 risk scale alongside experiences like “going to a theme park,” “eating at a buffet,” and “attending religious service with 500+ patrons.” If you haven’t read the news in the US lately, it remains not good: we’re about to surpass 200,000 COVID-19 deaths in the very near future as communities grapple with things like school re-opening, football season, and in-person voting.

In that light, the email on August 28 seemed downright silly based solely on the subject line: “URGENT! TENET SCREENING.” In good faith—as a person with a family who reads scientific coverage on Ars Technica—I could not justify the risk to see a film early and review it for an audience who largely can’t see it anyway. Though it has already been screening for the rest of the world, Tenet opened in the US over Labor Day Weekend, with Nolan and Warner Bros. insisting it would only appear in theaters, which are very much not open nationwide. Those parameters did have one small technicality working in my favor, though: two weeks before its release, the production studio announced Tenet would also be playing a limited number of outdoor theaters if that particular market had indoor theaters open to the public. And thanks to Austin’s Alamo Drafthouse opening in late August for Bill & Ted Face The Music, the Stars & Stripes Drive-In 45 minutes south of town in New Braunfels suddenly became a safer option to see whether the film at the center of all this hoopla even merited talking about.

No spoilers to come, but I’ll say this: Tenet won’t save physical movie theaters, financially or culturally speaking. It is, however, a totally fun nearly two-and-a-half-hour thrill ride with some clever ideas that wouldn’t necessarily make it past Neil deGrasse Tyson. In a vacuum, this film could have easily popped up mid-summer and taken over the pop culture zeitgeist in print and online, à la Once Upon A Time In Hollywood in 2019. In 2020, though, see it at a drive-in if you can—otherwise, waiting won’t be the end of the world. There’s no need to fly somewhere for a “safe” screening or drive four hours or cross state lines. Really.

Let John David Washington save the world all the time

Tenet is the kind of movie that leaves you asking, “Why can’t we have John David Washington as James Bond?” Secret operations take place where the stakes involve the fate of all humanity. Good looking people in well-tailored suits get into occasional fist fights as they globetrot around to access person of interest after person of interest until reaching the big bad. Fixers play a substantial role, and each has an ambiguous initial backstory and motivation that our hero (literally named “Protagonist,” says IMDB) slowly unravels. The full picture keeps changing. Stuff blows up, a lot, and looks really, really cool doing so.

But Tenet is not the newest Bond movie (No Time To Die still has time to make a release decision that doesn’t put viewers in a bad position); this film proudly maintains the DNA of a Christopher Nolan blockbuster. The trailer from late last year set up the basic premise: a small team of spies sets out to prevent World War III, and it appears traveling through time plays a factor in that. On a Nolan high concept scale from Inception to Interstellar, the sci-elements in Tenet probably fall more toward the latter. Things kinda, sorta make sense logistically if you don’t think about it too hard.

Thematically, though, Tenet’s ideas and themes really feel apt in 2020 (even if Nolan never could have written this with our current moment in mind). How will decisions we make now—on climate change, sure, but also about taking necessary precautions to avoid contracting and spreading COVID-19—affect the way future generations view the past? Do people travel through time or does time travel through generations of people? And to a lesser extent, when you have to don a mask to breathe, are you still you and does the world function in a radically different way? (Yes and no.)

Even if endless Reddit threads will some day try to determine whether everything that happens in Tenet’s first hour perfectly syncs with its second half, as it’s happening, this film rips. Nolan’s strength in set pieces continues, with my favorite being one of the smaller ones, actually, as Washington engages in a good ol’ fist fight at the back of some Michelin star European restaurant. Watching the action unfold in lush scenery across Mumbai, London, and throughout the Italian coast will make you long for the day when travel is again possible (even if it’s just to grandma’s house for most of us). The soundtrack has that Watchmen electronica vibe to keep your pulse moving in conjunction with the visuals. Kenneth Brannagh makes for an easy-to-despise villain, to say nothing about the fate of Elizabeth Debicki’s likable character. (Internet film heads will probably be looking up “Christopher Nolan dead wife complex” again.) Washington and co-star Robert Pattinson even inject a little lighthearted humor into their characters, a rarity for Nolan films.

Tenet just has style and kinetic energy to spare. If this was 2005, college dorm rooms would eventually be flooded with the DVD on a shelf and Tenet posters on the wall. (For now, maybe people will find a way to buy Washington’s watch.) Obviously it’s 2020, though, and this has proven to be its own unique, hellish year on many fronts. Some people will see Tenet now, risks be damned, because it’s a big shiny thing that will temporarily make you feel like you’re at the movies during any other time and place (mask-wearing regulations aside). A night at the drive-in certainly had that effect, even if I immediately disliked the idea of a 45-minute ride home after 11pm.

But for the other, health-conscious film fans who’ve stayed on top of the latest COVID-19 recommendations yet also regret not being able to read reviews or listen to podcasts centered on the only Hollywood A-list film we could get for the rest of the year, don’t fret. Tenet won’t change the world, solve the COVID-19 crisis, or even ensure the future of movie theaters remains a bright and physical thing. It will entertain, just eventually, when its studio backers make the rational decision to leverage the VOD infrastructure in place and allow people to watch safely at home. If the Disney-fied set pieces of Mulan merit a $30 ticket on top of a subscription fees, Tenet could probably still make a few bucks that way, too.