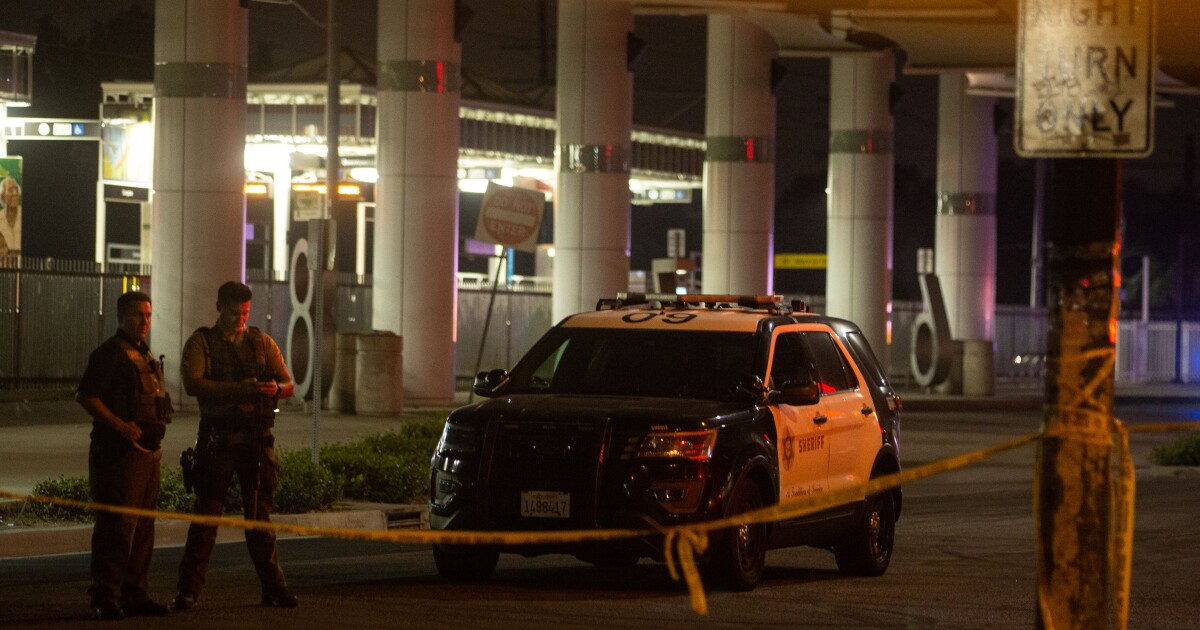 New surveillance video and dispatch calls provide a more detailed account of how two Los Angeles County sheriff’s deputies sitting in their car Saturday night were shot by a gunman before stumbling out to seek help.

The video reviewed by the Los Angeles Times shows a figure in dark clothes casually walk up a pathway near the Compton Blue Line station, approaching the deputies’ parked patrol car from behind.

The person draws closer and turns to face the passenger’s-side door, his steps quickening. Inches from the window, he raises a gun, opens fire and runs back the way he came.

Moments later, the passenger door opens and a deputy stumbles out, hand on head. The driver’s-side door opens soon after. On the radio, a shaky voice mutters: “998 Compton Pax.”

Recognizing the code for a deputy-involved shooting, a dispatcher asks: “Just happened?”

In the security footage obtained by The Times, an extended version of the footage released by the Sheriff’s Department, the shooter turns a corner out of the frame, past a second figure lingering on the sidewalk. It’s unclear if the second person was involved in the attack. A Sheriff’s Department spokesman declined to comment, citing the “ongoing active investigation.”

TL.A. County Supervisor Kathryn Barger on Sunday introduced a $100,000 reward for information leading to the arrest and conviction of the shooter.

Sheriff Alex Villanueva told reporters Saturday night that the wounded deputies were alert when they arrived at St. Francis Medical Center in Lynwood. Capt. Kent Wegener said the security footage was recorded with a fish-eye lens, so the height and weight of the assailant were distorted.

One of them is a 31-year-old mother of a 6-year-old boy and the other a 24-year-old man, Villanueva said. He said both deputies were sworn into office just 14 months ago in the same academy class.

“These are real people doing a tough job,” Villanueva said, “and it just shows just the dangers of the job, in the blink of an eye.”

Juan Ceja was managing Superior Grocers on Saturday night, unloading groceries, when he heard screaming and sirens. He rushed to the front of the store, worried there was an active shooter and learned of the shooting. The store was busy with customers, but Ceja decided to close the store early, at around 8:30 pm.

A few blocks away, Maria Medina, who has lived in the area for 20 years, heard the gunfire, which is not uncommon in her neighborhood, she said.

“It feels like there’s more tension between the police and people in the area,” Medina, 66, said in Spanish, with her dog Fluffy at her side.

She’s noticed a heightened police presence in the area recently. It makes her feel safe, but she also thinks that law enforcement is more aggressive with the predominantly Black and Latino residents who live there than they are with white people.

Though the two deputies survived the shooting, she said “no one deserves to have their life taken like that.”

The shooting comes amid heightened tensions between the Sheriff’s Department and the community after a string of controversial killings by deputies that have sparked months of protests.

Villanueva said in a brief interview that detectives had been “working furiously overnight” to identify the shooter.

He said the shooting evoked the 2014 attack in Brooklyn where a man fatally shot two New York police officers.

“There is no rhyme or reason to it; it is an act of a coward,” Villanueva said. “Obviously tensions were running high in the neighborhood with the deputy-involved shooting. But there is no nexus to it at this time. We are chasing all leads.”

Detectives are scouring the area for more surveillance video that may offer a better view of the shooter, he said.

On Thursday, detectives from the Operation Safe Streets Bureau shot and killed a man who they said opened fire on them as they served a search warrant in Compton, according to the Sheriff’s Department.

“It is by the grace of God and the skill of the incredible nurses and surgeons at St. Francis Medical Center that these deputies survived this attack. My prayers are with them, their families, and their colleagues who are working to find the perpetrator,” she said.

The Sheriff’s Department has been under scrutiny for several deputy-involved shootings in recent months. The killing of a man on a bicycle in Westmont has sparked days of tense protests. Some demonstrators came to St. Francis Medical Center, where the wounded deputies were being treated. The department said on Twitter that some of those protesters had blocked entrances and exits at the hospital, but that could not be independently verified.

Videos from the scene capture at least one person in the crowd yelling, “I hope they … die.”

A reporter for KPCC and LAist was arrested there. Video showed the reporter, Josie Huang, pinned by several deputies.

“That’s what surprises me the most, is that once she was identified as a reporter that they transported her, that they cited her,” L.A. County Inspector General Max Huntsman said Sunday. The independent monitor oversees investigations and actions of the Sheriff’s Department.

The inspector general’s office has opened investigations into the department’s conduct in its arrest of Huang as well as at a news conference Friday where deputies in riot gear confronted activists, Huntsman said.

“Those two incidents are of concern to us because 1st Amendment rights are absolutely critical to the public’s respect of law enforcement,” he said. “And so we feel that requires immediate investigation.”

Setif Capelton who has lived in Compton nearly all his life, was struggling Sunday to understand why anyone would shoot two deputies sitting in a parked car.

“It makes no sense,” said Capelton, 22, who heard the burst of gunfire the night before. “It hurts this community more than anything else. Now, what if someone walks up to a police officer’s car, and they get scared and shoot that person?”

Capelton said tensions in the area had reached “a boiling point.”

Omar Williams, who lives near the Metro station on Willowbrook Avenue, said he was saddened if not surprised to learn someone had shot a police officer, an act he called “the work of an evil person.”

Williams, 40, had taken part in protests against racism and police brutality earlier in the summer, but he’d recently sensed in the crowds a heightened anger.

“You could hear the chatter in the crowd,” he said. “You could feel the tension. You could tell something was going to happen.”

He believes the police have at times abused their authority and subjected Black people in Compton and elsewhere to “years of hostility.” Those abuses shouldn’t be forgotten, he said.

“But I’ve got to remember this,” he said, standing across the street from where the two deputies were shot, “as much as I remember the killing of an unarmed Black person by the police.”