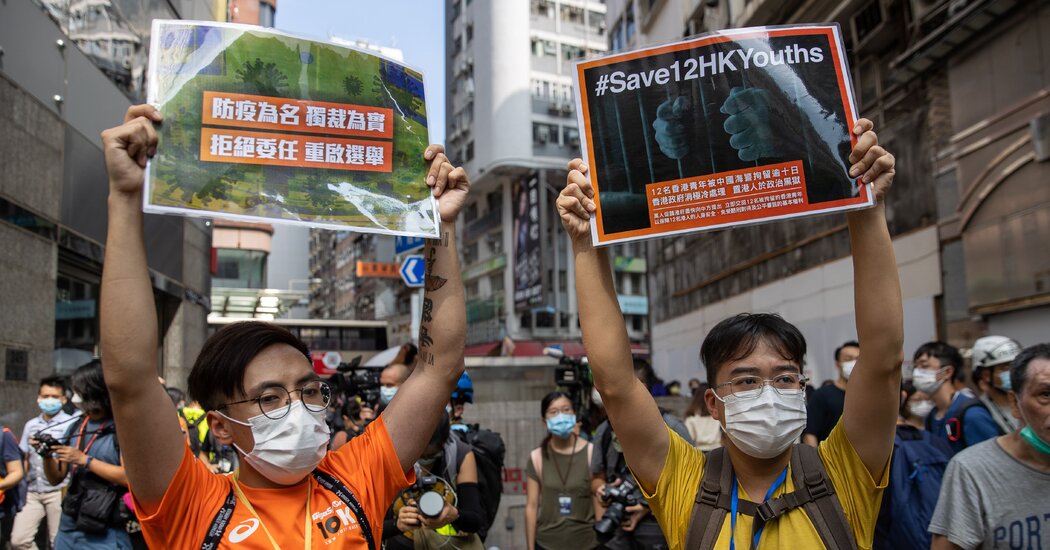 HONG KONG — The families of a dozen Hong Kong activists arrested at sea last month spoke out for the first time on Saturday, pleading with the Chinese government to allow the detainees access to their chosen lawyers.

The 12 activists — at least one of whom had previously been arrested under the sweeping national security law that China imposed on Hong Kong in June — were apparently trying to flee to Taiwan when the Chinese Coast Guard stopped them about 45 miles southeast of Hong Kong Island. They are being held in Shenzhen and face possible charges of immigration violations and people smuggling.

The detentions highlight the concerns that kindled a mass protest movement in Hong Kong last year, when a plan to allow extraditions to mainland China stirred fears that Hong Kong residents would become ensnared in the mainland’s opaque legal system. Hong Kong is a semiautonomous part of China, with its own legal system and stronger protections for individual rights than the rest of the country.

Lawyers for members of the group say they have been barred from meeting their clients. Family members said that the mainland authorities claimed the detainees had appointed their own lawyers, whom the families rejected as government-assigned representatives who were unlikely to help.

The family members of six detainees appeared at a news conference on Saturday wearing masks, sunglasses and hooded jackets in an effort to maintain anonymity even as they appealed for help.

They asked to be able to speak with their jailed relatives and send them medicine for asthma and skin conditions. They also called for the 12 to be returned to Hong Kong as soon as possible.

Lu Siwei, a prominent human rights lawyer in the southwestern province of Sichuan, said that after a failed attempt last week to meet with one of the 12, he had traveled to Shenzhen again on Wednesday to try to meet his client.

He said he had taken with him a legal document signed by his client’s family to authorize his legal representation of the detainee. But he said that the atmosphere outside the detention center was tense, with numerous traffic officers guarding the area, and that he had been denied access again.

Mr. Lu said a police official had inspected his documents and told him he would be notified within 48 hours.

“After two hours, they told me that my party had already authorized two lawyers and will not arrange a meeting with me,” he said in an interview.

Mr. Lu said he had later filed a complaint about the incident, but had yet to receive a response. He also said he was skeptical about whether his client really had legal representation.

Randy Shek, a Hong Kong lawyer, represents one member of the group, Hoang Lam Phuc, a 16-year-old of Vietnamese descent. The lawyer said he had been unable to contact his client and had no information about his situation. Mr. Hoang faces charges of attempted arson and the possession of offensive weapons in Hong Kong, Mr. Shek said.

The mother of Li Tsz-yin, another one of the detained, told reporters on Saturday that she did not trust the lawyers assigned by the government.

Secretary of State Mike Pompeo raised the case in a statement on Friday, saying that Washington was “deeply concerned” that the activists had “been denied access to lawyers of their choice.” He called on China to ensure fair legal treatment for the 12.

The detainees range in age from 16 to 33, mainland officials said. One is a Portuguese national, and at least two have British overseas passports, said Eddie Chu, a lawmaker who is assisting the families.

People familiar with the case said those held included Andy Li, an activist who largely worked under the radar but was the public face of an independent poll monitoring initiative that brought several international observers to Hong Kong for local elections in November. He was arrested by the Hong Kong police during a security law sweep a month ago and later released on bail.