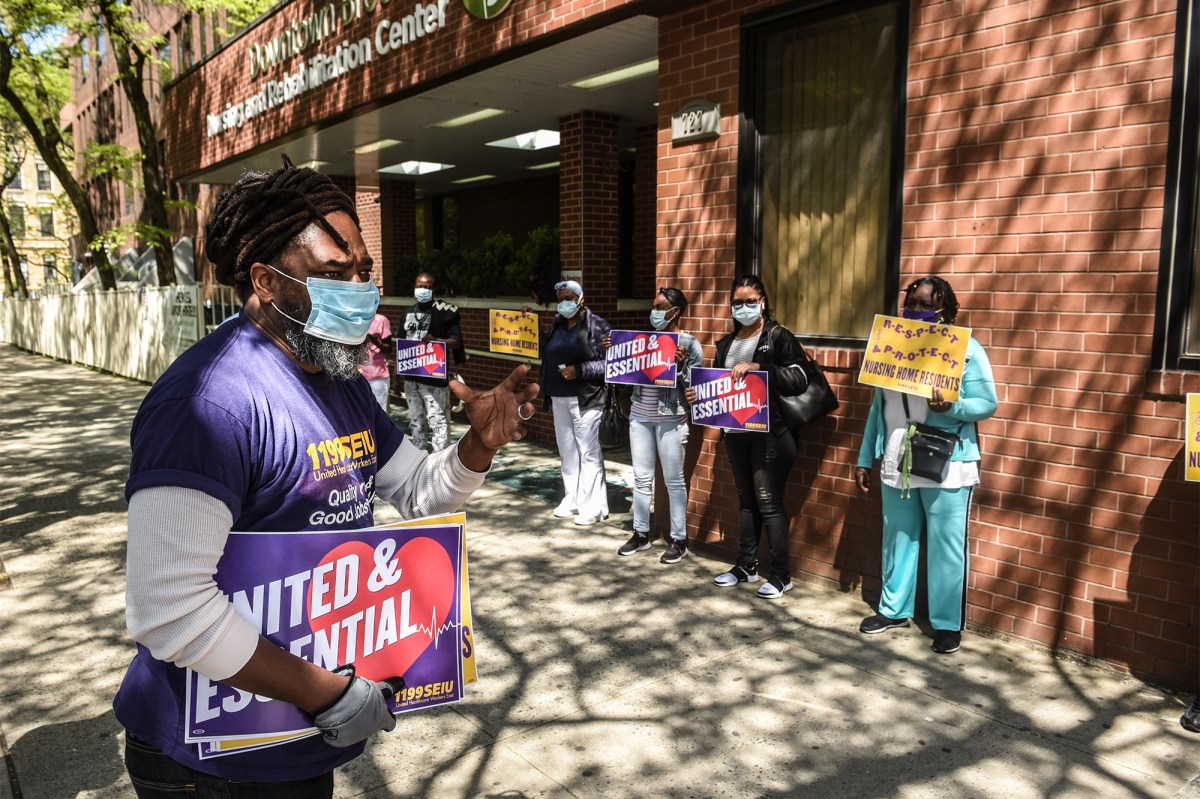 ALBANY — Fewer than 20 percent of New York’s nursing homes have reopened to visitors amid the coronavirus — and now family members desperate to see their loved ones again are calling for the state to relax the requirements.

Out of the state’s 613 nursing homes, 117 have received approval from Gov. Andrew Cuomo’s state Health Department to accept outside visitors since July 15, after facilities were shut to non-essential visits due to COVID-19 worries on March 13.

To allow guests again, facilities must clear a high threshold of proving they have gone 28 days recorded a single positive case in either a resident or staff member. If some tests positive, the nursing home must reset back to day 1.

The situation is now proving frustrating those eager to see grandparents, parents and other loved ones after four long months.

Mimi lives in the New York State Veterans’ Home in Montrose, but was unable to see her daughters and 86-year-old husband John Nichols on her birthday July 19 because the facility has yet to meet state requirements.

“March was our last real visit. My family had two window visits in July and she cried when she saw us. This is so cruel to keep her from her husband and daughters and grandchildren,” Karen told The Post, adding at this rate it doesn’t seem like they will be seeing their mom until a vaccine is produced.

The sisters started a petition last week seeking to reduce the 28-day rule instead to 14 days, and have thus far garnered 254 signatures with a goal of 1,000.

“We are asking for outside visits with masks and social distancing,” she added, explaining it’s a temporary solution at least before the winter months kick in — or a second wave.

Kim Lancaster, 57, of Peekskill signed the petition because she is also desperate to see her dad Bill Lancaster, 81, who has been at the VA since 2017 and has Alzheimer’s.

“It’s been very hard on my mom especially, he did remember her but she thinks he’s forgotten all about her at this point,” she said, adding that her 81-year-old mother Regina Lancaster used to see her husband regularly before the pandemic, and has only been able to make a window visit once, but abandoned the idea because “it’s too confusing for him.”

Federal guidance issued last month by the Centers for Medicare and Medicaid Services say nursing homes may allow visitors if they meet that 28-day mark as long as “there have been no new, nursing home onset COVID-19 cases in the nursing home” during that period.

Nursing home industry sources told The Post New York’s guidance goes beyond the federal standard — as it covers any staff or resident coronavirus case recorded, even if it didn’t derive from the facility itself.

They want the state to go back and adopt the federal guidance instead, ensuring only coronavirus cases borne directly from a facility qualify.

A July 10 DOH press release confirms New York’s directive also goes further: “Although CMS guidance only references new onset resident cases during the past 28 days, New York has gone further to protect our most vulnerable, and based on statistics nationwide, the policies support those decisions.”

“We took a poll of our members and 75 percent of facilities are not able to open as a consequence of the 28-day COVID-19 free restriction,” he said.

“Consequently, NYSHFA has requested the State to adopt a 14-day COVID-19 free restriction that would mirror the 14-day quarantine period for nursing home and assisted living staff.”

The directive also complicates visitations for nursing homes serving kids — like the Elizabeth Seton Children’s Center in Yonkers, one of just six nursing homes dedicated full-time to pediatric care out of 16 homes total that have pediatric beds.

The facility hasn’t recorded a resident case in 150 days among 169 sick kids, but weekly testing of roughly 700 employees continues to trigger the 28-day rule — at an average conversion rate of .6 percent, less than the state’s own total average, according to the facility.

Rachel Amar, 50, hasn’t seen her son 18-year-old Max since March. He’s 100 percent dependent on a ventilator and requires full staff support in order to move, as he sits in a wheelchair and wears a neck brace.

“The kids need to see their parents. The kids are acting up and the parents give them love, it’s impossible they can get the love that a parent gives from the staff,” Amar told The Post.

She’s advocating for visitation to resume in line with DOH standards governing a hospital’s pediatric ward, which allows up to two parents to visit the bedside of their kids.

“You wake up, you get to see your kids and see them in your house. I can’t do that. I need to see him just as much. This is my life, he’s my life,” adding she has visited Max in the Children’s Center every day for the past 14 years.

As of Saturday, 209 facilities have qualified to reopen for visitors, but only 117 have submitted plans to the DOH.

“As we said from the beginning, science and safety would guide our decision to resume visitations to nursing homes, and it has,” DOH spokeswoman Jill Montag said in a statement.

Montag continued: “The number of facilities that are eligible to reopen to visitors, and the number that have taken the next step, shows they are appropriately adhering to CMS guidelines with smart and cautious plans for visitation. Given the increase in cases nationally, we commend them for all they – and all New Yorkers – have done to flatten the curve and to stay safe.”

The virus has claimed the lives of over 6,300 nursing homes residents in the state since March according to state records.