A father and daughter were killed along with their friend when a wrong-way driver plowed into their car in Long Island yesterday.

Ruben Sanchez-Flores, 67, and Ivis Sanchez-Cordova, 34, died in a crash when 33-year-old Marvin Balcaseres’s sedan crashed into their Nissan SUV, causing flames to burst into the air and debris to scatter across the road.

Balcasere drove the wrong way down the Southern State Parkway for less than a minute, police believe, when he crashed into Mr Sanchez-Flores at around 5.10am.

He died in the crash, which also killed the father, daughter and daughter’s colleague  Edith Magana, 56, on the road notorious for accidents. 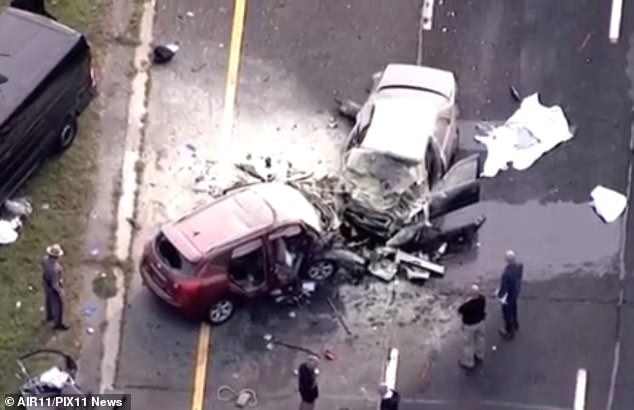 A friend of Mr Sanchez-Flores’s family confirmed the cab driver was taking his daughters to work before he and Ivis were killed.

The friend told the New York Post: ‘This guy came out of nowhere going the wrong way on the highway.

‘I feel so sad because they’re like my family. We’re from the same city in Honduras. Everybody’s very sad about it.’

Nadia, who was sitting in the front passenger seat, was rushed to Nassau University Medical Center, where she continues to receive treatment.

Mr Sanchez-Flores, who has several other children, is from Honduras and lived in Hempstead, Nassau County.

His daughters emigrated to the US from Honduras in the last few years. Nadia lives also lives in Hempstead with her husband and three children. 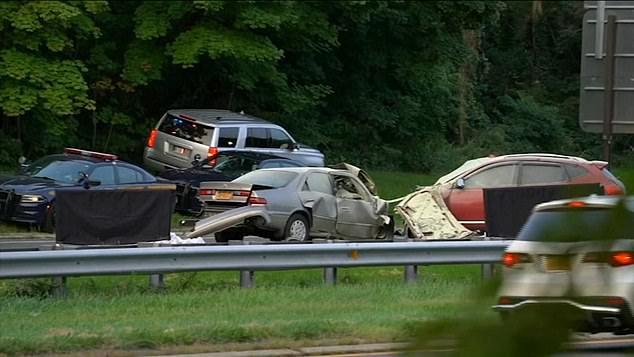 Balcasere drove the wrong way down the Southern State Parkway for less than a minute, police believe, when he crashed into Mr Sanchez-Flores at around 5.10am

He said engine oil and pieces of the wreckage were spread across lanes.

A motorcyclist who attempted to avoid the crash sustained non-life-threatening injuries after hitting debris from the accident.

Another SUV was caught in the crash after it attempted to avoid Balcaseres’s Toyota Camry, but the driver was uninjured.

The cause of the crash remains under investigation, Captain Mohl confirmed at a news conference on Tuesday afternoon.

But he said the police believe Balcasere entered at an exit less than a mile from the crash in Nassau County, near exit 29.