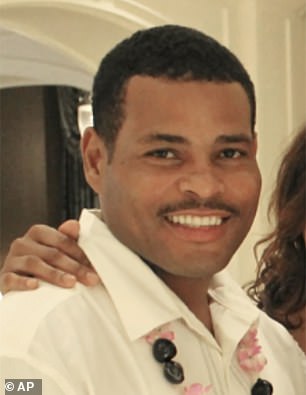 Ronald Greene, 49, smiles in an undated photo provided by his family. Federal authorities are investigating Greene’s death during what Louisiana State Police called a ‘struggle’ to take him into custody

Federal authorities are investigating the 2019 death of a Black man in police custody after his family claimed Louisiana State Police ‘brutalized’ him when he failed to stop for a traffic violation.

The death of 49-year-old Ronald Greene remains shrouded in secrecy because State Police have declined to release body-camera footage related to the May 2019 chase north of Monroe, Louisiana.

Greene’s death drew new attention after his family filed a wrongful death lawsuit this year alleging state troopers ‘brutalized’ Greene and ‘left him beaten, bloodied and in cardiac arrest’ before covering up his actual cause of death.

Greene’s family said authorities initially claimed Greene died after crashing into a tree but omitted what State Police now acknowledge was the ‘struggle’ preceding his death.

The lawsuit, drawing on witness accounts, alleges officers pinned Greene to the ground and used a stun gun on him even after he apologized for leading them on a chase.

Greene’s mother, Mona Hardin, said her family has not been able to grieve because so many questions remain unresolved. She said her son had been a well-liked barber who lived in West Monroe and had a ‘giving spirit.’ 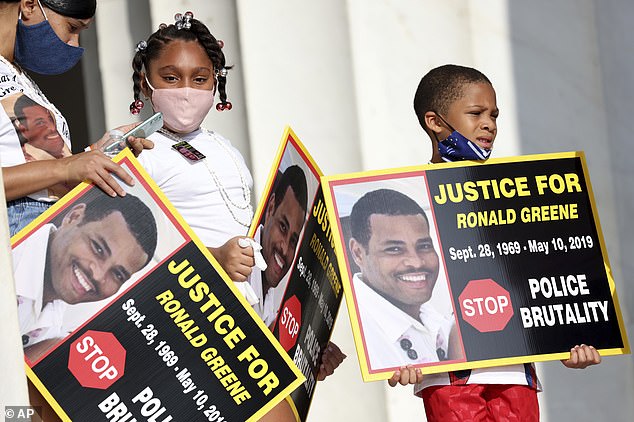 Greene’s family’s members listen to speakers as demonstrators gather for the March on Washington, Friday Aug. 28, 2020, in Washington, on the 57th anniversary of the Rev. Martin Luther King Jr.’s ‘I Have A Dream’ speech

‘This has gutted our family,’ Hardin told AP. ‘How do people live with themselves after doing something like this?’

The investigation comes amid heightened racial tensions within Louisiana State Police, an agency that has been plagued by misconduct cases in recent years. Earlier this month, Gov. John Bel Edwards, a Democrat, said it was ‘unacceptable’ that State Police had failed to discipline a trooper recorded using a racial slur on duty.

The handling of Greene’s death has eroded the agency’s credibility even further, said Eugene W. Collins, president of the Baton Rouge branch of the National Association for the Advancement of Colored People.

‘The public has a right to know what happened to Mr. Greene that day,’ he said, ‘and the concealing of this information by the Louisiana State Police is not only disgusting but immoral.’

State Police spokesman Capt. Chavez Cammon said the agency is ‘cooperating with federal officials’ even as it conducts its own internal investigation.

Two law enforcement officials familiar with the case said State Police are investigating whether one of the responding troopers improperly turned off his body camera during Greene’s arrest. They spoke to AP on the condition of anonymity to discuss an ongoing investigation. 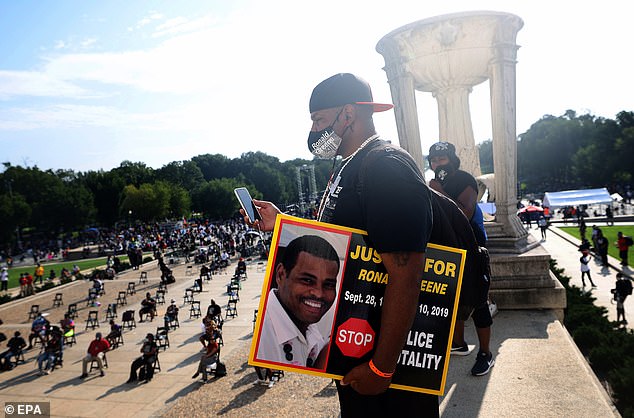 Sean Greene, brother of Ronald Greene, listens to speakers at the Lincoln Memorial in Washington, DC, 28 August 2020. Greene died in police custody following a high-speed chase in Louisiana in 2019

Edwards ‘is aware of the investigation and expects that there will be a comprehensive and fair evaluation of the facts,’ spokeswoman Shauna Sanford wrote in an email. ‘He has not seen the video.’

Greene’s death was ruled accidental and attributed to cardiac arrest, said Renee Smith, the Union Parish coroner who was not in office when that determination was made. Smith said her office’s file on Greene attributed his death to a car crash and makes no mention of a struggle with State Police.

‘The physical evidence we’ve been able to review is inconsistent with the manner of death that they’ve described,’ said Lee Merritt, a prominent civil rights lawyer representing Greene’s family.

Asked for his reaction to footage of Greene’s death, John Belton, the Union Parish district attorney, said it would be ‘inappropriate for me to comment because of the ongoing federal investigation.’

The FBI declined to comment. The U.S. Attorney’s Office in Shreveport confirmed the federal investigation into Greene’s death but declined further comment.

State Police have released few details about Greene’s death. A crash report says troopers attempted to pull him over for an unspecified traffic violation shortly after midnight May 10, 2019, about 30 miles south of the Arkansas state line. Greene ‘refused to stop,’ the report says, and ‘a pursuit ensued.’

‘Greene was taken into custody after resisting arrest and a struggle with Troopers,’ the report says, adding that he ‘became unresponsive’ and died on the way to a local hospital. The report doesn’t describe any use of force by troopers.

Greene’s family contends the crash was not serious enough to account for his fatal injuries. Their lawsuit says his vehicle ‘did not make impact with a tree and his airbag did not deploy.’

Greene ‘was not injured and could walk, speak and otherwise function in a healthy manner after the crash,’ the lawsuit says, adding an autopsy found cuts and ‘blunt-force injuries’ to Greene’s head and face.