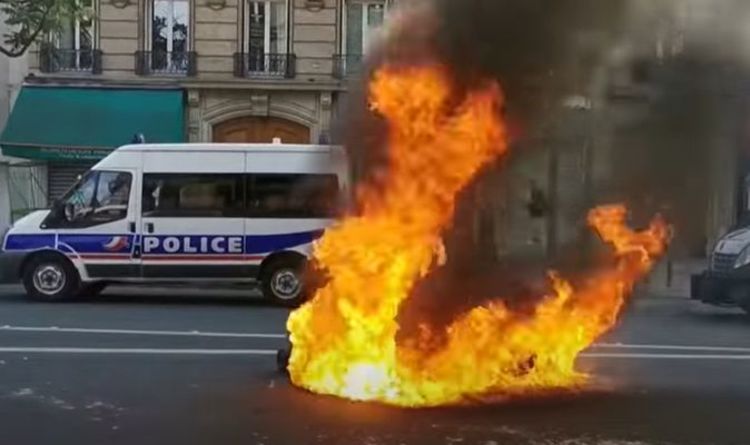 France‘s Yellow Vest demonstrations have staged a comeback in Grenoble and many other cities this past weekend. In Paris, police used tear gas after some of the protesters left their authorised route. A car and some rubbish bins were also reportedly set on fire as people railed against President Emmanuel Macron‘s policies.

One protester told Euronews: “I’ve been campaigning with the Yellow Vests since the beginning.

Another said: “We keep going out on the streets because we need to be heard more.

“We realised that we tried to be nice to Parliament, and today the result is not there. Things are getting worse.”

By the middle of the day, the police had detained over 150 people.

A large number of heavily armoured police officers were seen firing tear gas at the crowds to disperse them.

The French Government has limited the maximum number of participants to 5,000 for larger gatherings.

France has been experiencing a serious surge in coronavirus cases since lockdown measures were eased.

Can’t see this Brexit poll? Click here to open in your browser

The Yellow Vests began protesting two years ago after a tax on fuel was increased.

It claims that a disproportionate burden of the Government’s tax reforms were falling on the working and middle classes.

Anti-government demonstrators don the fluorescent vests that all French motorists are required to have in their vehicles.

This is how the movement got its name.

The protests have seen multiple people die and hundreds injured.